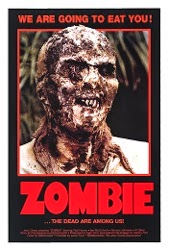 Someone is going to have to explain this to me.

Try as I might, I can't get on board with Zombie. Or with its director, Lucio Fulci. Or most Italian horror, for that matter -- a point I have made several times on this site. I swear that this is not some "cause" for me. I don't want to be like another certain film critic who takes on certain positions to the point where he's still beating the drum long after everyone has stopped listening. I just keep trying to find a way "in" to Italian horror, because it's one of the few subgenres I just don't dig. I have no interest in talking anyone out of liking it -- I get it, I think. I'm hoping someone can talk me into enjoying it.

But I don't think that's going to happen. Fulci's movies (and, to a lesser extent, Argento's and Bava's) seem like the kind of thing that you either respond to or don't.

A couple of years ago, I screened one of my favorite movies, Phantom of the Paradise, as part of a birthday marathon. When it ended, my best friend Doug (who had just seen it for the first time) stood up and said "Why do you like this?" He wasn't being accusatory. He wasn't saying it as a condemnation of the movie, implying that there was nothing to like. He just wanted to understand what it was about the movie that made me love it so much. It's a perfectly valid question, but also one that has no easy answer. Some movies we just respond to, like we're coded to like them in our DNA. Phantom of the Paradise pushes every one of my buttons and makes me as happy as a movie can. It's not necessarily one or two aspects I can point to as "working" -- it's that the sum total of the thing goes straight through my heart. 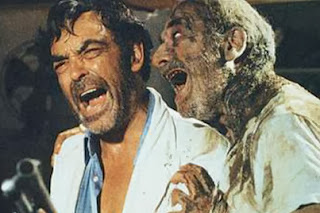 This, I think, is what people who really love Italian horror experience. There's not one thing that they might say is "good" about the movies in the traditional sense, save maybe the explicit gore. No, it's more of an overall feeling that they respond to -- the sum total of the thing. The Italian horror movies that I've seen (and I do keep trying) tend to approximate dreaming in a way that most movies don't. They look and feel like life as I know it, but not quite. The dialogue usually doesn't sync up to the lip movements. The stories don't follow traditional narrative logic, instead jumping around in a way that makes sense in a dream but can be frustrating when awake. Everyday occurrences explode into nightmares without warning. I see how they can transport someone who loves them to another state of being, even if I'm never transported myself.

This brings me to Fulci's Zombie, a movie I didn't care for much when I first saw it several years ago and which I still don't really care for now, even though I'll admit it's very watchable. Of the Fulci movies I've seen, it's probably the most accomplished and straightforward. On one level, I guess that would make it the "best." But if I'm going to watch a Fulci movie, I'd rather watch one of his crazy nonsensical films -- at least what those lack in narrative coherence, they make up for in nightmare imagery. Or I could watch The Beyond, because I still haven't seen that one.

Zombie follows the exploits of Anne (Not Mia Farrow), an American searching for the truth about her father's disappearance after the boat he owned is discovered in New York with a zombie on board. She meets Peter West (Ian McCulloch), the reporter assigned to the boat story. They travel to the Virgin Islands, where Anne's father went to conduct research and is now supposedly suffering from a mysterious illness. There, they meet another couple -- Bryan (Pier Luigi Conti, acting under the much more American name of "Al Cliver") and Susan (Auretta Gay), who has a penchant for scuba diving in nothing but a bathing cap. The foursome sets off to find the island of Matool, which is slowly growing crowded with the reanimated dead -- victims of a voodoo curse that return from beyond the grave to eat the living. 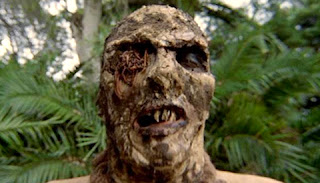 Except for the part about islands, Zombie is basically every other zombie movie ever made: there are no zombies, and then there are zombies. People get eaten. Roll credits. The big distinction that Zombie makes to set it apart from, say, George Romero's movies is that it offers an explanation for the plague: voodoo. Plenty of voodoo zombie movies have been made, from I Walked With a Zombie to The Serpent and the Rainbow to Sugar Hill, and none of them resemble this one. That's because Zombie isn't a "voodoo zombie" movie. It's a Romero zombie movie, in which the dead rise up and feast on the flesh of the living and must be shot in the head to be killed, only every once in a while someone says "voodoo." Sure, black magic might explain how the dead are coming back to life, but it doesn't explain why they have to eat people or why a headshot is needed.

The connection to Romero is not accidental. When it was released in 1979, the Italian title of the film was Zombi 2, suggesting it was a sequel to Dawn of the Dead (which was released as Zombi in Europe) even though the films have nothing to do with one another. It regularly appears on lists of the best zombie movies, right there alongside Night of the Living Dead, Dawn and Day of the Dead. That is a bit ridiculous. Zombie has none of the intelligence of Romero's films. It has none of their satire or their political bent. It doesn't even boast the same level of gore gags; for as smart and subversive as Romero's original zombie trilogy was, he never skimped on finding clever, elaborate, over the top ways to kill both human and zombie alike. With the exception of one sequence (which I'll get to in a minute), Zombie's gore gags consist of people getting bit on the arm or neck. Shit, Walking Dead is capable of more than that, and it's on basic cable.

I'm positive this movie is still talked about for only two reasons: the zombie/shark scene and the eyeball scene. You know -- the only two scenes anyone mentions when bringing up Zombie. 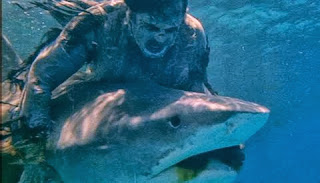 So let's start with the shark thing. It is a stupid scene, and 15 or 20 years ago would have rightly been seen as ridiculous. It does nothing to advance the plot, it tells us nothing of any character. It is a self-contained tangent that exists only because it can. But we live in the age of the Ironic Hipster, so now zombie versus shark is called "amazing" just because it includes a) a zombie and b) a shark. I can say two positive things about the scene. First, I have never seen that in a movie before. Doesn't make it good, just makes it original. Second, it's an impressive stunt. That's a real guy in zombie makeup wrestling a real shark. Neat, if only if it were in the service of a better scene in a better movie. But ok. I will promise to give the scene a pass if hipsters promise to shut the fuck up about it from now on.

Then there is the now famous eyeball scene, arguably one of the most famous and graphic kills in horror movie history, in which a woman is dragged VERY SLOWLY towards an enormous wooden splinter that threatens to drive straight into her cornea. I'll give Fulci this: the eye gag is incredibly well done, holding on the suspense just long enough that we're tortured wondering whether or not he's going to go through with it. Being Fucli, OF COURSE HE DOES -- and in graphic, squishy detail, no less. It's rough. A movie gaining 30+ years of cult status on the basis of one gross kill seems a little silly, but I suppose horror movies have coasted on lesser reputations. 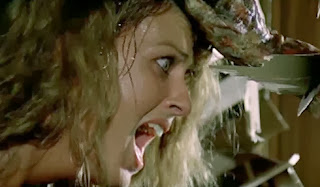 From a gore standpoint, I get why horror fans enjoy Zombie. Fulci loves to show graphic death in full, bloody detail, often zooming in on gushing wounds just to give us a better look. It's really why he has such a following in the first place. As someone who doesn't mind gore but who would never seek out a movie specifically because of it, that's just one more thing that leaves me cold in Fulci's movies. It's gore without any context or intent -- gore for gore's sake. This isn't even one of his most graphic movies; except for the aforementioned eyeball sequence, it's practically restrained by Fulci standards.

I still don't get the appeal of Zombie (or Zombi 2, or Zombie Flesh Eaters, or Woodoo or any of the titles under which the movie was released). I liked more things about it than I can remember from my first viewing (mostly the score and the last shot, badly staged as it may be), but not enough to get me going back again and again. Take away the shark and some splintered wood and you have just another inferior zombie movie. There are too many other good ones for me to spend time with this.

Part of what I love about horror is that there's such a wide variety of styles, tones, plots and approaches within the genre that everyone can find something that speaks to him or her -- there's something there for each of us. That also means that nothing can be for ALL of us. I may have to accept that the films of Lucio Fulci, Dario Argento, Mario and Lamberto Bava, Umberto Lenzi and countless other Italian horror directors just aren't for me. I may keep trying, but now that I'm at the point where I've started circling back and giving these movies a second try -- only to find that my feelings haven't changed -- I may have to throw in the towel. I want to like Italian horror, because I see how much it means to its fans. I'm at the party, but I'm standing in the corner alone and having a lousy time while everyone else dances and gets drunk. And pukes up all of their insides, of course. 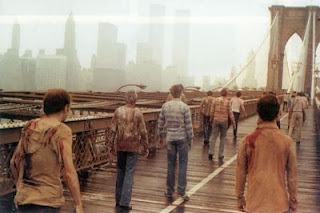 Posted by Patrick Bromley at 12:27 PM