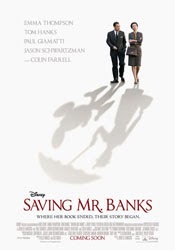 There is probably a really interesting story to be told about the process of turning P.L. Travers' Mary Poppins into a Disney movie. I'm just not sure it should have been Disney telling the story.

Of course, maybe the story couldn't have been told without Disney's involvement, so it makes sense that they be the studio responsible for bringing the movie to the screen. Saving Mr. Banks is full of images and music from Disney's 1964 adaptation of Mary Poppins (a movie still unseen by me). As a statement on how commercial entertainment is collaborated upon and created, the movie is ok. As a statement about the nature of art, it's a bunch of horseshit -- a sales pitch from Disney that sells out Travers while it tells us she was right to sell out.

But, hey, Mary Poppins remains a beloved classic. Maybe they were on to something. 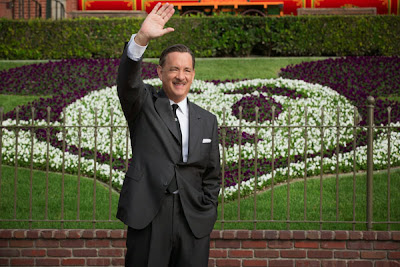 Emma Thompson plays Travers, the notoriously prickly and stubborn British author (though born in Australia) of the Mary Poppins books. She has been hounded for years by Walt Disney (Tom Hanks) to turn the books into a live-action film because he promised his daughters he would. Because she needs the money, Travers agrees to meet with Disney and sell the rights to her books on a few conditions: 1) She has final approval over everything, 2) it has to be live action, not a cartoon and 3) it can't be a musical. 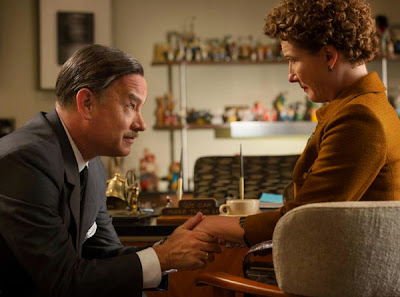 Obviously that goes out the window pretty quickly, and the rest of the movie bounces back and forth between Travers clashes with Disney, composers the Sherman Brothers (B.J. Novak and Jason Schwartzmann, both effectively put upon) and screenwriter Don DaGradi (Bradley Whitford) and Travers' memories of growing up in Australia and watching as her father (Colin Farrell) loses his job at the bank and eventually descends into alcoholism. See, Mary Poppins is really just adolescent wish fulfillment in which Travers rewrites the tragedy of her own childhood and saves her father from himself! She SAVES MR. BANKS! And DISNEY MAGIC teaches her how to do it!

Saving Mr. Banks is being released at the same time as Inside Llewyn Davis, the newest great movie from the Coen Brothers. The two films would actually make a great double feature if only for how they address artistic integrity. Llewyn Davis is a proud, stubborn artist whose pride and stubbornness stands in the way of his own success. Saving Mr. Banks' answer is to just sell out -- spend a career releasing "Please Mr. Kennedy" (the novelty song to which Davis contributes in one of the best scenes in the movie) not just because it's what would be best for Davis, but because it's what would be best for ALL of us. 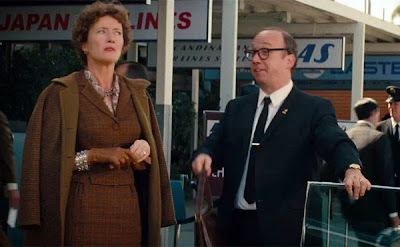 Please understand that I am not judging P.L. Travers for selling her stuff to Disney. She needed the money and thought she could retain some control. I am judging Saving Mr. Banks for making the case that not only was she right to do it, but that Disney actually IMPROVED on her books. And that she thought so, too.

My understanding is that Travers was not a fan of the film, and wouldn't let Disney nor the Sherman Brothers nor ANY American near the eventual stage musical that was produced in the '90s (she even wrote it into her will). And there are hints of that in Mr. Banks; not to spoil anything, but eventually they do make a movie of Mary Poppins and she attends the premiere. We get a few shots of her cringing at the things she does not like. By the end, however, Travers has given herself over to movie magic, openly weeping in her seat. There is something very insidious about the movie's messages. I know we're supposed to be overjoyed when we watch Travers finally succumb to the joys of the Sherman Brothers' score and begin to dance around the room to "Let's Go Fly a Kite," but it's all kind of gross. Travers was a pain in the ass, Mr. Banks seems to argue, and just needed to lighten up and get out of the way so Disney could take over. 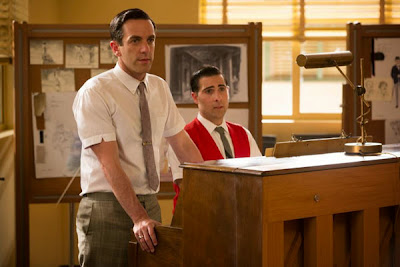 There are things to like in the movie. I'm a fan of the period and of movies about the makings of movies (except Hitchcock; never Hitchcock), so the whole thing is watchable. Saying Emma Thompson is good in the role is like saying the sky is blue, water's wet, but her performance should be commended for not softening Travers. She does not make apologies for the stubbornness nor the pursuit of integrity; it's the movie that softens around her. As a big fan of Tom Hanks, it's fun to watch him play a frustrated Walt Disney (for a few seconds, we even get to seem him smoke -- that's about as dark as Disney will let this one get). But even the casting of Hanks is cynical. He is such a likable performer and automatically engenders such goodwill with audiences that we instantly side with him. The Disney company stacks the deck in their favor.

What does the movie no favors is the direction of John Lee Hancock, who never met an emotion he didn't want to slather in syrupy music and milk for every manipulative moment. Hancock, who is probably best known for the execrable The Blind Side, is exactly the guy for the job -- he's a company man with no identifiable integrity as a filmmaker, making him the perfect counterpoint to this representation of P.L. Travers. 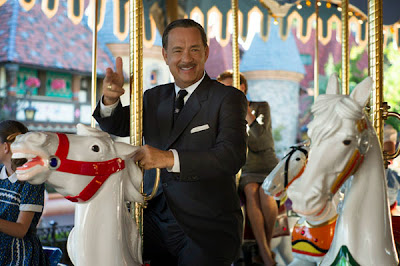 I'm not buying.
Posted by Patrick Bromley at 1:49 PM