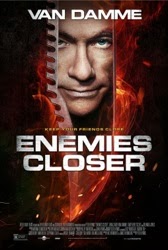 The new action movie Enemies Closer, currently playing in very limited release an on VOD, does the unthinkable: it turns Tom Everett Scott of That Thing You Do! into an action star, and a pretty good one at that. He's a hero in the John McClane tradition -- a normal guy (with specific training) caught in the wrong place at the wrong time -- and Scott's nice guy decency serves him well. There's just enough character setup (we see him at work) at the outset that, when combined with Scott's own innate likeability, quickly gets us invested in whatever is coming his way. And boy is something coming his way.

What's coming his way is Jean-Claude Van Damme, reuniting here with director Peter Hyams, who previously directed the star in two of his best movies, Sudden Death and Timecop. Enemies Closer is also edited by Peter's son John Hyams, who has directed Van Damme three times in Dragon Eyes, Universal Soldier: Regeneration, Universal Soldier: Day of Reckoning, the latter two being among the best action movies of the last 10 years. These are all people who have worked together before, always with good results. Enemies Closer isn't as good as any of those past collaborations (Dragon Eyes notwithstanding), but I'm a big fan of enough of the pieces that I enjoyed myself a whole bunch. 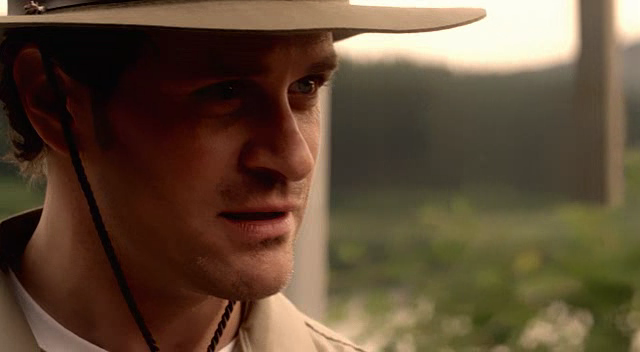 Tom Everett Scott stars as Henry, the park ranger of King's Island, a small, isolate island located between the U.S. and Canadian borders. After work one night, Henry is accosted at gunpoint by Clay (Orlando Jones), an angry man who knows a secret about Henry's past and is looking to take some revenge. Those plans are cut short by the arrival of Xander (Van Damme) and his team of armed drug dealers, who sneak onto the island posed as Canadian mounties and are in search of a huge supply of heroin that went down in a plane crash. If Henry and Clay want to survive the night, they'll have to work together and blah blah blah...you know the deal.

By far the best thing about the movie -- the thing that's going to make Enemies Closer a lasting entry in the genre -- is the performance of Jean-Claude Van Damme as the movie's villain, Xander. Van Damme is amazing, continuing what has to be the most interesting third act of any action star in history. While Sylvester Stallone continues to trade on nostalgia to get back in the good graces of the box office and Steven Seagal lazily stays the course, Van Damme has only gotten better in recent years. It's as though something inside him was freed by his revelatory performance in 2008's JCVD and brought him back from the brink. Since then, he's been doing the best work of his career, whether its finding the haunted sadness in 6 Bullets or blowing everyone off the screen as the bad guy of The Expendables 2. His performance in Enemies Closer is very reminiscent of his turn as Jean Vilain in the latter movie; after decades as the hero, it's clear that Van Damme is once again having a blast playing a bad guy. His hair, once again dyed Street Fighter orange, is teased out like a crazy Belgian clown. He announces up front that he's a vegan, and between every act of sadism and murder he literally stops to pick wild berries or preach some environmental message. It doesn't add anything to the plot; it's just some incredibly entertaining color that makes Xander more memorable than the typical Hans Gruber knock off. 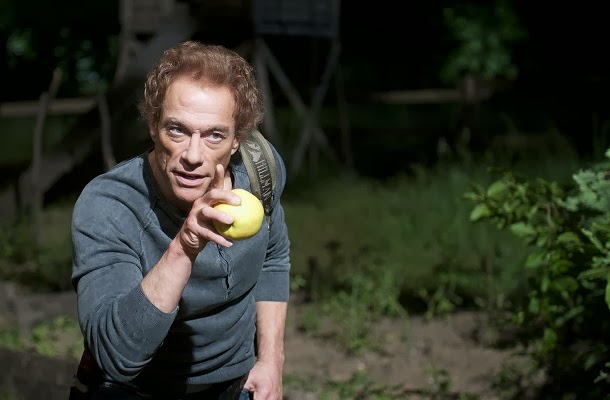 No, the Die Hard comparisons are not accidental. With Tom Everett Scott as the lone park ranger taking on a group of bad guys, the pieces are in place for this to be Die Hard on an island. But because of the Orlando Jones character, it's more like Die Hard with a Vengeance -- individual development thrown away in the service of bickering and discord (though at least no one makes Tom Everett Scott wear a racist sandwich board) between two characters when one would have sufficed. It's not Jones' fault; he, too, makes a capable action hero and does what he can with a character possessing only a single trait (he wants revenge), but his stuff seems grafted on from another screenplay. There are two movies fighting with one another in Enemies Closer -- or, as is more likely the case, it only feels that way because both halves are underdeveloped. It seems like two full scripts had to be chopped up to accommodate one another, but really it's just one that's problematic.

I can't decide if the humorlessness of Jones' performance is an asset or a liability. On the one hand, it's more interesting to watch him play different than we've ever seen him do; on the other, it's rarely a bad idea to lean on your actors' strengths. Ultimately, that's going to be the legacy of Enemies Closer: it casts its three main actors totally against type. The guy made famous by playing the action hero is the villain. The hero is played by a guy best known for his work in light comedy, while the comedian plays the antihero. It's like action movie musical chairs, but never succumbs to feeling like a novelty. 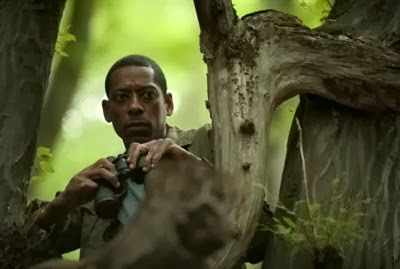 I'm a big fan of Peter Hyams and his no-bullshit approach to filmmaking, but he has developed a tendency as both a director and a DP (he shoots his own films) to obscure everything in darkness. He did it in The Relic, he did it in A Sound of Thunder and he does it again here -- nearly all of the fights take place in the woods at night, and it's impossible to make anything out. A big part of the reason for this is to cover up the use of stunt doubles in the action scenes, but that's another problem with the movie. Once upon a time, heavy reliance on stuntmen was acceptable in action movies. But in this age of action stars like Scott Adkins, Iko Uwais and even Jason Statham, we tend to be less forgiving of films in which the heroes can't fight their own battles. It's cool that Hyams took a chance on casting Tom Everett Scott and Orlando Jones in an action movie (this is same man who turned Billy Crystal and Gregory Hines into Chicago cops), but rarely are we allowed to be impressed by the transformation. The film is shot and cut in such a way that even if it is Jones and Scott doing the fighting, it's the stuntmen to whom we want to give the credit.

Despite taking place on a whole island, the film feels claustrophobic -- everything seems to take place in the same half-mile radius. Characters have no trouble finding one another. They venture out 500 feet into the woods, then come back to the same dock. Out into the woods, back to the dock. Until one character climbs a tree at the very end, the setting has no bearing on anything that happens. That sense of redundancy is all over Enemies Closer -- it's a movie that keeps cycling through the same beats over and over. Henry and Clay escape danger, then immediately launch back into an argument about the past. Van Damme kills someone or orders his henchmen to kill someone, then immediately launches into another speech about living a vegan lifestyle. Characters don't grow so much as repeat.

With the exception of the Van Damme performance, everything about Enemies Closer feels small -- the location, the number of actors in the cast, even the stakes (the bad guys just want to recover some drugs and leave; there's a version of this plan in which no one gets hurt). That's the state of the non-blockbuster action movie these days. Hollywood isn't making the kind of mid-budget actioner in which Hyams specialized during the '90s. Everything costs either $150 million or it costs $5 million (the reported budget of Enemies Closer). I'm much more partial to the latter, as they tend to eschew huge, effects driven set pieces in favor of close combat, characters and relationships. Enemies Closer is that kind of movie. Hyams, Van Damme and Tom Everett Scott all turn in the kind of work that made me such a big fan of all three in the first place. The movie some big issues, but its heart is in the right place. 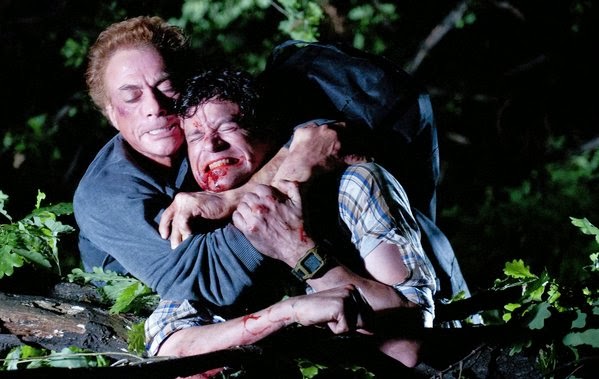 Got a movie you'd like to see included in a future installment of Heavy Action? Let us know in the comments below.

Posted by Patrick Bromley at 7:56 AM