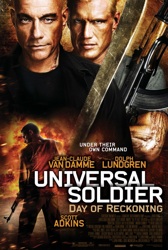 I haven't yet broken the Direct-to-Video seal on Heavy Action (it's going to happen soon), and Universal Soldier: Day of Reckoning is the closest I've come. But the movie is actually getting a small theatrical run -- in 3-D, no less, though I can't conceive of a world in which this movie needs to be seen in 3-D or how it would be improved by the format -- so I'm getting by on a technicality.

In case you haven't been paying attention, the Universal Solider franchise is a mess of continuity that contains a bunch of unrelated movies and makes no real sense, but which, thanks to these last two sequels, has become the most unique and interesting action franchise of all time. The original movie came out in 1992, and it's great -- it's goofy and entertaining and one of Jean-Claude Van Damme's finest hours. It gave the world the pairing of Roland Emmerich and Dean Devlin, who would go on to make Stargate and Independence Day. So that's great. But they would also make Godzilla, which is like finding out the cure for polio causes cancer.

That movie was followed up by two DTV sequels, Universal Soldier II: Brothers in Arms and Universal Soldier III: Unfinished Business, both released in 1998 (and neither of which I have ever seen). Produced as a miniseries for what was hoped would lead to a Universal Soldier TV show, the movies continue the adventures of Luc Deveraux and Veronica Roberts (the Van Damme and Ally Walker characters from the first movie), now played by totally different actors. Then in 1999 came Universal Soldier: The Return, a theatrical release that once again starred Van Damme as Luc Deveraux but which totally ignored the previous sequels. In this one, Deveraux has somehow become a human again, which means that science has discovered not just a way to reanimate the dead but actually CURE DEATH. The movie is most noteworthy for featuring the acting debut of WCW wrestler Bill Goldberg.

Seemingly run into the ground and dormant for a decade, the franchise was revived by first-time director John Hyams (son of Heavy Action Hall of Famer Peter Hyams, the man behind Timecop, Sudden Death and Running Scared) with the appropriately-titled Universal Soldier: Regeneration. The movie, which ignores every previous installment including The Return, reunited Van Damme and Dolph Lundgren for the first time as their original characters, also adding former UFC champion Andrei Arlovski into the mix as the scariest, most badass UniSol yet. Regeneration is kind of a miracle -- it's both the best DTV action movie ever made and one of the best action movies of the decade. When news broke that Hyams, Van Damme, Lundgren and Arlovski were all reuniting for Day of Reckoning -- and adding Scott Adkins on top of it -- the potential was there for a movie even better than Regeneration. 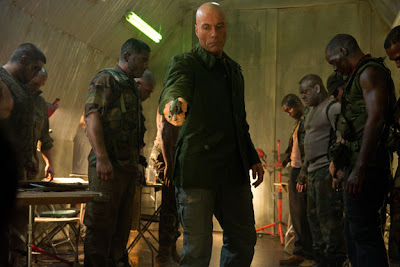 I'm not sure that's what Day of Reckoning is, but it almost doesn't matter. The two movies are so different and have such different approaches that they can't be compared. Gone is the balls-out action approach of Regeneration, and in its place is a moody, horror/mystery hybrid that Hyams himself says is influenced by David Lynch, Gaspar Noe, Joseph Conrad and Stanley Kubrick, among others. Those influences aren't so much felt in Day of Reckoning as much as they are straight-up quoted; as obtuse and vague as the movie can be, there's nothing all that subtle about it.

The movie opens in a long POV shot as regular-guy John (Adkins) is awoken from sleep by his young daughter, who claims that there are monsters in her room. He humors her and checks it out, only to discover his living room invaded by hooded intruders. Their leader removes his hood to reveal -- TA DA! -- it's Luc Deveraux, head shaved, eyes tired and sad, face blank -- who proceeds to murder John's wife and daughter. CUT TO nine months later, as John wakes up in a hospital bed, still recovering from his injuries. He is released from the hospital, swearing revenge on the man responsible just as his life grows more and more confusing. People he encounters look at him as though they know (and fear) him. A man produces security footage that shows John beating someone to death. A UniSol called The Plumber (Arlovski) is hunting him. Meanwhile, Deveraux and Andrew Scott (Lundgren) are assembling an army of newly-liberated sleeper agent UniSols acting on their own free will and planning to overthrow the government...

More can't be said about Day of Reckoning, because it would spoil the movie's mystery. It has been criticized for being pointlessly confusing. It is not. It does require a certain amount of patience, though, and perhaps the audience sitting down to watch the fourth (or sixth) Universal Soldier movie were not expecting an enigmatic mood piece. Van Damme doesn't make too many of those, unless you count Double Team. And while you don't really have to have seen Regeneration to understand the events of Day of Reckoning (or even the original Universal Soldier, for that matter), it helps to fill in some of the gaps -- and there are a lot of gaps between Regeneration and Day of Reckoning. There's practically a whole movie that we never see taking place between the two, which explains how Van Damme goes from good guy UniSol in Regeneration to murderous Col. Kurtz-like cult leader in Day of Reckoning, even though there are things that happen in the previous movie that explain it. And while he's the "villain" of the movie, the more the mystery unfolds the more we are forced to question how true that really is. 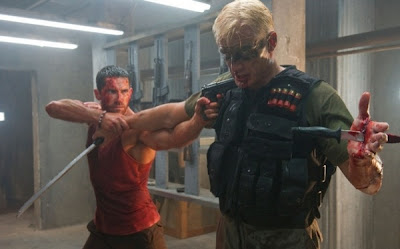 This is actually the second time this year that Van Damme, Lundgren and Adkins have all appeared in the same movie, the first being Expendables 2. This is a much better movie. Lundgren and Van Damme actually aren't in it that much -- Van Damme, in particular, is more of a symbol than he is a character -- which leaves more screen time for Adkins, who gives his best performance to date. It's amazing how far he has come as an actor since Ninja in 2010. While he's probably not in danger of getting any Oscar buzz (that's all reserved for Hugh Jackman in Les Miserables, which will just be retroactive attention for Swordfish), Adkins does a good job of being angry, hurt and intense. Plus, when the time comes for him to kick ass (and OH MAN DOES THE TIME COME), he's the best. He's the first legitimate action star to come around since Jason Statham first covered himself in motor oil in The Transporter a decade ago, and it's criminal that he's not better known outside of DTV action movie junkies. Between this movie and El Gringo (plus getting on the big screen in Expendables 2 and Zero Dark Thirty), Adkins has had a good year. I will watch every single movie he makes.

The original Universal Soldier used its reanimated-cyborg conceit as a way of creating some superhuman action heroes that weren't a direct rip-off of The Terminator, even if they totally were. Hyams ignores the "awesomeness" of being indestructible, instead focusing on the sadness of being brought back to life over and over as a mindless, soulless weapon. The UniSols in his two installments have become aware of their own condition. Like Frankenstein's monster, they resent their creators. They resent being turned into mindless slaves. They're set up as the bad guys in the movie, mostly because they commit acts of crazy, brutal violence (and the movie is VERY violent in a way that's awesome if you're an action fan; fingers and feet and heads -- ESPECIALLY HEADS -- are met with all kinds of trauma), but it's also kind of understandable where they are coming from. They don't want to be controlled by the government and forced into an existence that's just wake up, kill, go back to sleep. The whole movie is about free will -- do we want to have our eyes opened, or do we choose to believe the lie? I'm kind of on the side of the UniSols, though I guess I part ways with them at the whole "violent revolution" thing. Don't be dicks, guys. 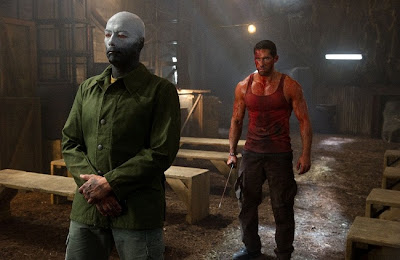 Because the two most recent movies in the franchise have been so excellent -- and they really are both pretty incredible -- I suspect we will continue to see more DTV Universal Soldier sequels. I would be on board with that if John Hyams continued to make them, because he clearly is interested in taking the series in crazy directions and in using it to explore some interesting ideas. Hyams has pretty much said he's done, though, so we'll either get a an ordinary action-type sequel (it would be hard to go back to that after the art-film flourishes of DoR) or someone trying to imitate the stark weirdness that Hyams achieves. I'm not excited by the prospect by either, but I'll adopt a wait-and-see approach. I should learn my lesson, after all -- what were the chances of sequels 5 and 6 to Universal Soldier becoming two of the best action movies of recent years? And look how that turned out.

Action movies are an interesting thing (-- Patrick Bromley, F This Movie!). Horror fans are willing to accept all kinds of different horror movies -- it's a genre filled with sub-genres, all of which have their own fans. Action movies aren't typically allowed to experiment; there is a sameness to them that is both comforting and confining. Day of Reckoning breaks the mold, pushing the genre in a different direction. Not everyone is going to like it, but it is haunting and scary and violent and, at times, thrilling. If nothing else, Adkins and Arlovski have a fight in a sporting goods store that ranks alongside the final fight in The Raid: Redemption as one of the best of the decade. It's a crazy movie unlike any action movie I've ever seen. I love it.

Universal Soldier: Day of Reckoning is currently available on Video on Demand and in very limited theatrical release.

Got a suggestion for a future installment of Heavy Action? Let us know in the comments below.
Posted by Patrick Bromley at 6:38 AM