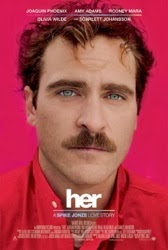 Her is a very good movie and absolutely worth seeing. It is also a movie that made me feel worn out and unhappy. While possibly being one of the best movies of the year, I wouldn’t say it was one of my favorites.

I’ve seen Her twice and personally think it is Spike Jonze’s best movie. I liked Being John Malkovich and Adaptation, but I respond to those movies with my head and not my heart. As for Where the Wild Things Are, I don’t know what to tell you. That’s a tantrum more than a movie. Her is different.

I love movies about relationships and Her is certainly a good one, but for some reason I find myself rejecting it as much as embracing it. It's similar to how I felt about Before Midnight. I’ve thought about Her a great deal post-viewing and I think what it comes down to is that this movie feels like real romance and not movie romance. Real romance, at times, is not fun and that aspect is so well-represented in movies like Before Midnight and Her that the predominant sentiment the movie leaves me with is depression. It’s not the fault of the movie, but it would be pointless to write a review and not be honest about how it made me feel. Nevertheless, I give major credit to Her for being so affecting.

I wonder if married people or people in long-term relationships see Her in a different and more positive way than I do. I am part of the dating pool and I recognize lots of shit from my real life in the movie -- especially in that blind date scene with Olivia Wilde, which will haunt me forever. I’m not kidding. That scene actually upsets me, because that’s how it sort of is right now to date people. But they never look like Olivia Wilde, you’re always supposed to sleep with them (because, whatever) and then you have a crazy on your hands for a month. I know the drill. It’s not the end of the world. It’s June 2012. 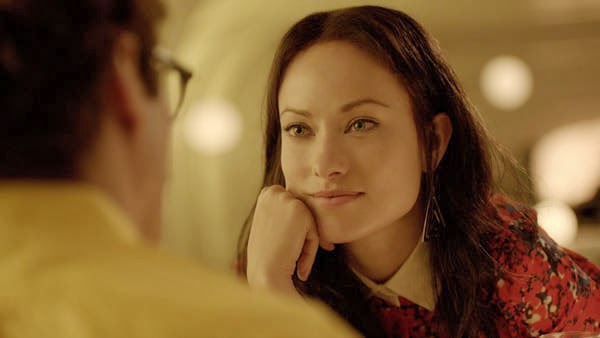 Her made me feel (as a single person) that all of us who are just out there trying to meet that special someone are completely screwed because technology has heightened our neuroses so much that it’s impossible to get out of our shells and simply accept someone as they are and not what we expect them to be. If you clear that hurdle, someone has the audacity to get up in your grill about drinking a fruit smoothie (that scene bothers me so much because Joaquin seems so happy with his fruit smoothie and some douchebag has to figuratively shit on it). Ugh. See what I mean? This might be a great movie, but it’s poison to someone in my situation. It’s better to just shake something like this off, but I can’t get this movie out of my head.

But enough of my angst (you’re probably thinking "This isn’t called Him!"), let’s talk about all of the good things that are in the movie. First the performances, led by Joaquin Phoenix, are all truly strong. I was a little worried that we were going to go deep into twee-ville when I saw the trailers where Theodore has the last name Twombley and is made up to look like a combination of Super Mario and Leonard from The Big Bang Theory. Those concerns were quickly pushed aside because there are not many actors as good as Phoenix at playing vulnerability, and he does it in a way that draws you in while not feeling mopey. He’s a tremendous actor with incredible range, and there were times in Her where I stopped and took a second to admire the fact that he was acting out a seemingly real relationship with a) an operating system and b) by himself, without any other actors physically in front of him. It’s an excellent performance.

Amy Adams has the most screenwriter-y role: she’s the girl next door and somewhat of a plot convenience, but it never feels that way because Adams (once again) imbues the character with history, warmth and depth of emotion. Is Amy Adams my favorite actor/actress working today? I think maybe. Rooney Mara, Chris Pratt and Olivia Wilde have brief roles and are effective. As for Scarlett Johansson, I have nothing to object to -- she has a fantastic voice, but I’m not seeing (er, hearing) a GREAT performance there. It’s a challenging role and she does what she can with it, but that part didn’t click for me. In fact, the parts of the movie where I found myself less interested where all of the ones between Phoenix and Johansson, whereas I was super invested when Phoenix was playing off his flesh and blood counterparts. Maybe that’s supporting one of the themes of the movie? I.E. That it’s more edifying to have analog, real relationships than digital recreations of ones. 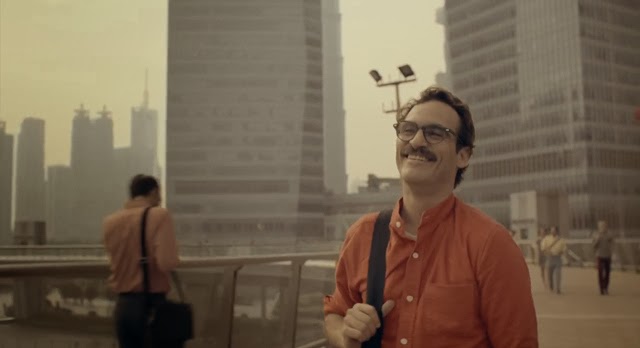 Also worth noting is the movie has exquisite cinematography by Hoyte Van Hoytema (The Fighter, Let the Right One In) and production design by K.K. Barrett (Lost in Translation, Being John Malkovich). This is the type of movie they should show in IMAX. The bright skyscrapers and cityscapes are wonderful to soak in. I liked all of the innovations and tech that Spike Jonze imagined. It’s cool, but in a way that never seems far-fetched. He clearly gave that part of the movie a good deal of thought and it paid dividends. I also enjoyed the score and supplemental music by Arcade Fire and Karen O. There’s a delicate and lovely song called “The Moon Song” sung by Karen O. that is so good I want to hug it. I like the Arcade Fire music until they start singing. Then I check out. But the electronic background music is the bomb. Music, like comedy, is all subjective, so your mileage may vary. BTW…why is this soundtrack not available on Amazon???

A slight issue I have with Her, which I’ll say up-front is maybe not the movie’s fault, is it has too many ideas to explore over a two hour movie. Jonze goes all the way with the core idea of not forgetting how important human interaction is in an ever-evolving digital world, but there’s a whole heap of other interesting ones raised that have to be dropped. For example, what is life like for a woman like Olivia Wilde’s character? I want to see that movie. What would a relationship with an artificial intelligence look like if it lasted beyond the confines that the movie allows? I want to see that movie. Expanding upon the sex surrogate scene, what if the A.I. resulted in relationship-bots, would it signal the end of humanity? Would the human race die out? I want to see that movie. The movie has a surplus of worthwhile things to say. I definitely want to give Her credit for presenting them and inspiring so much conversation and thought afterwards.

All in all, I admire Her quite a bit. It shook me up more than most movies have, but it’s a sad experience and one I’m not sure I’d want to revisit much in the future. 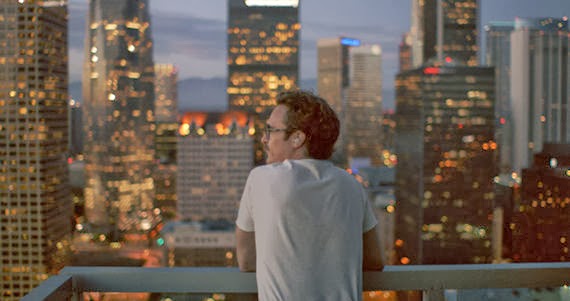 Note: As I left the theater, a stranger made a point to tell me that he thought Her was “one of the worst movies ever.” At the urinal. People can be so stupid. I am sending out a request for the void. Can we not immediately hail things as masterpieces or the worst ever right away after seeing a movie? I’m so tired of hyperbole in either direction. I feel like movie conversation is way too often an all-or-nothing position. And don’t talk at the urinal.
Posted by Patrick Bromley at 7:11 AM