Recently, I designed a display case at school to force my students to think about the Beatles during February. Then, to prove I was serious about the whole Beatles thing, I flew to New York City for the 50th Anniversary of the Beatles landing in America and performing on the Ed Sullivan Show. Yeah, yeah, yeah!

I don't fuck around.

Last October, the display case outside of the library at my school featured my extensive collection of horror memorabilia. The student body dug it, baby -- dug it the most. I received a boatload of positive feedback from students and staff. Monsters!  Monster movies!  BOOKS ABOUT MONSTERS!  What could be more awesome?

For the winter months, the librarians put up a "Snowman Celebration" display, which did not mention ONE snowman movie. NOT ONE.

I was fairly sure that most, if not all, of my students knew who the Beatles were, but I wanted to do something special for the 50th anniversary. The last time I filled the display case with my Beatles stuff was exactly ten years ago for the 40th anniversary. Understand that the display case I speak of here is huge: four feet high by thirty feet wide. It takes a lot of “stuff” to fill it. Would I be up to the challenge?

In honor of our librarians I decided that their snowman-friendly blue background would do nicely. Also, I am lazy. 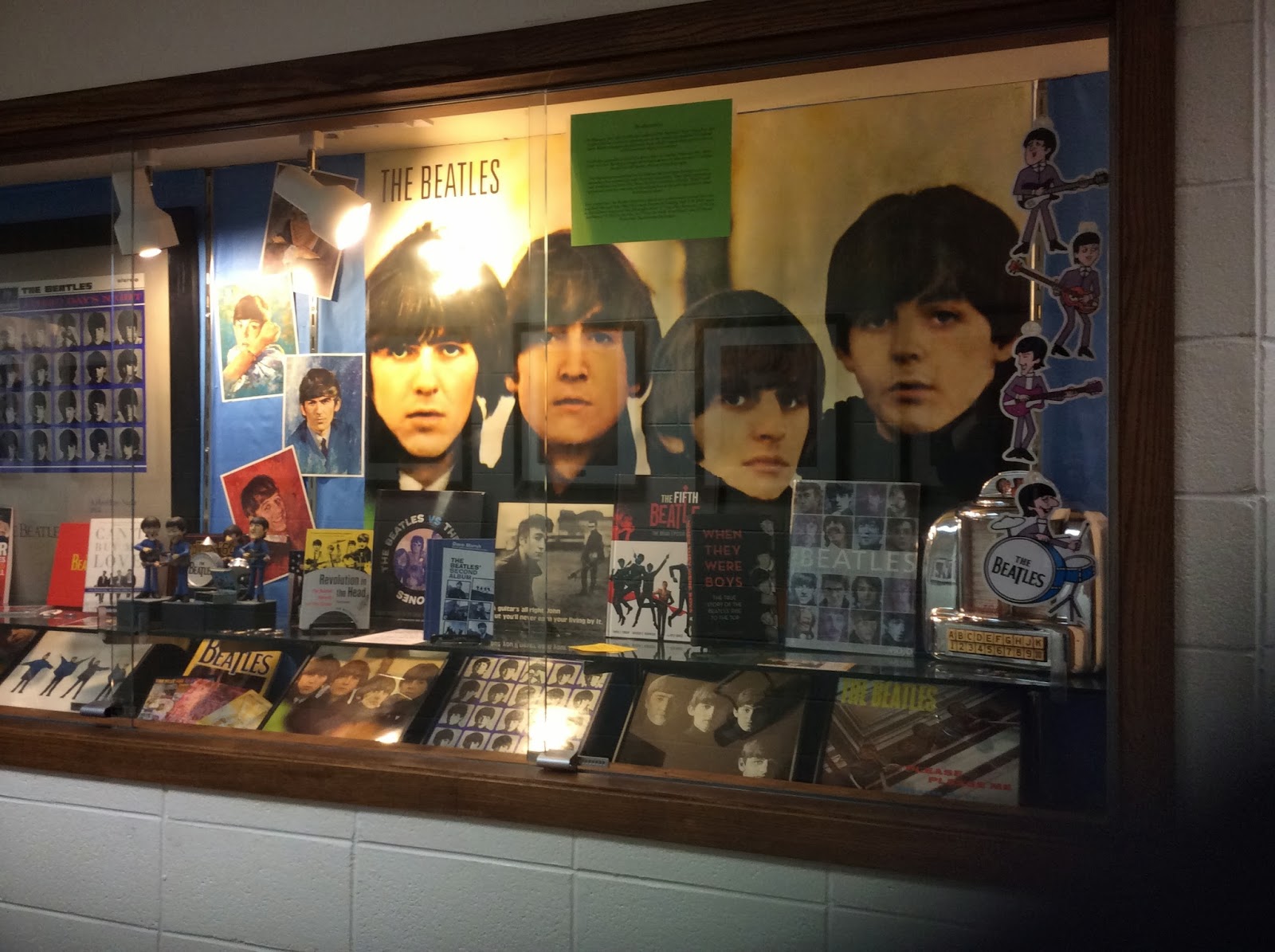 Much like October, I wanted to place something really eye-catching every five feet or so. I decided that the “visual anchors” of this display would be an authentic 1960 Seeburg jukebox wall unit; a replica of a Beatles "suitcase" record player from 1965; the original "panels" poster for the Beatles' film Help!; Yellow Submarine action figures, including the "Hey Bulldog" figure spinning endlessly on a portable phonograph; and a working Yellow Submarine lava lamp. FTM's very own Doug let me borrow his collection of album covers, which formed a sort of metaphoric timeline along the bottom of the display. 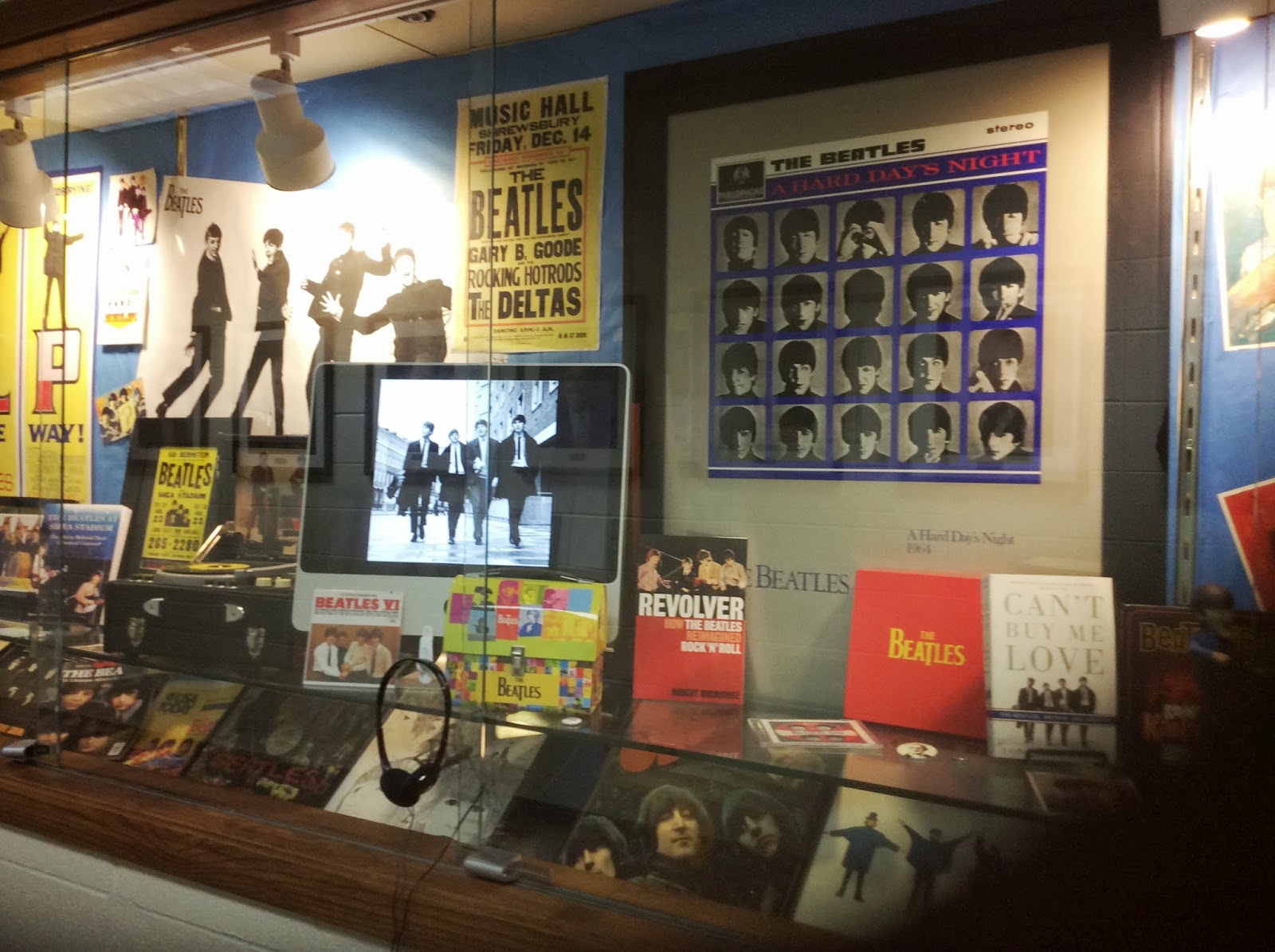 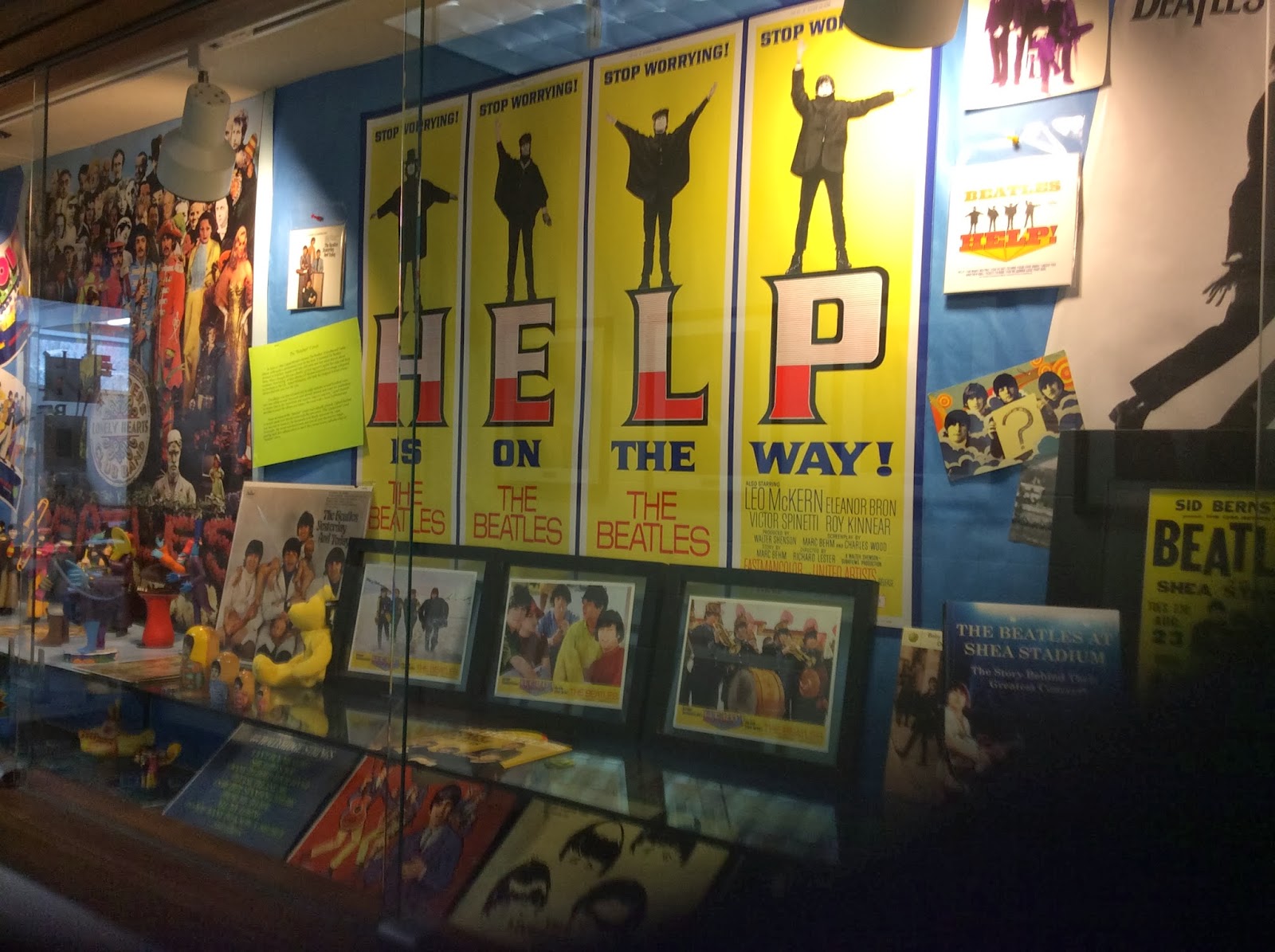 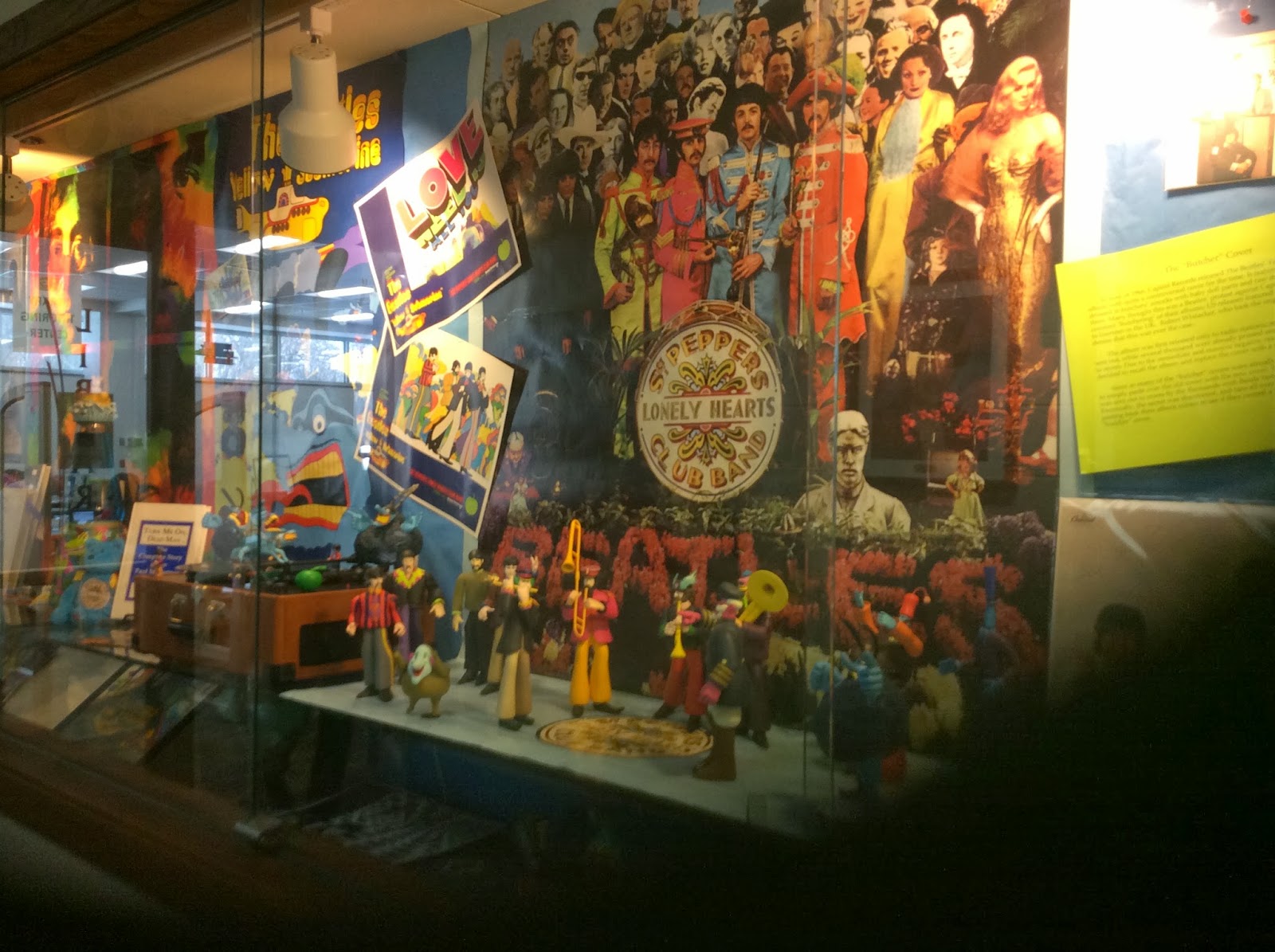 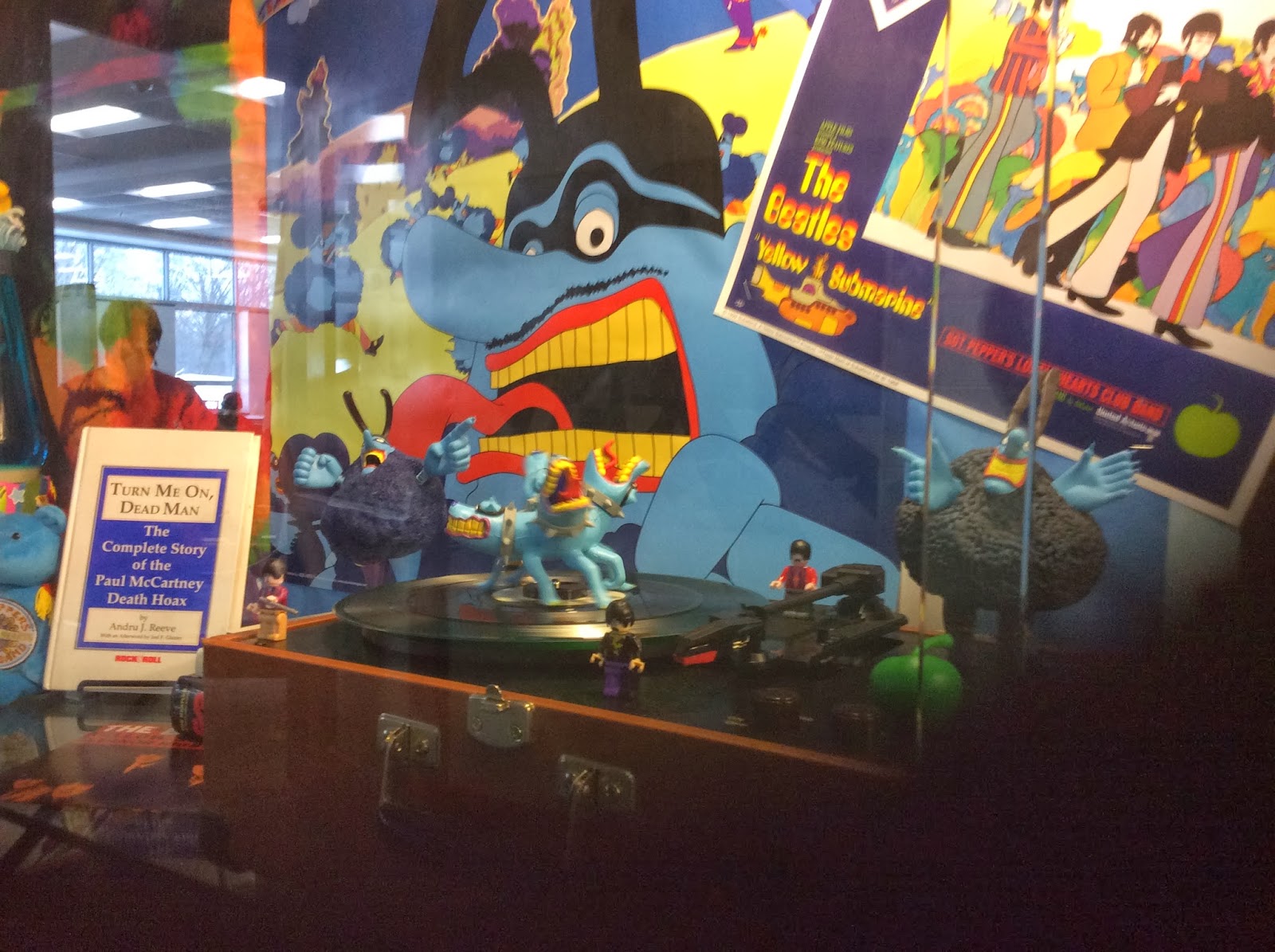 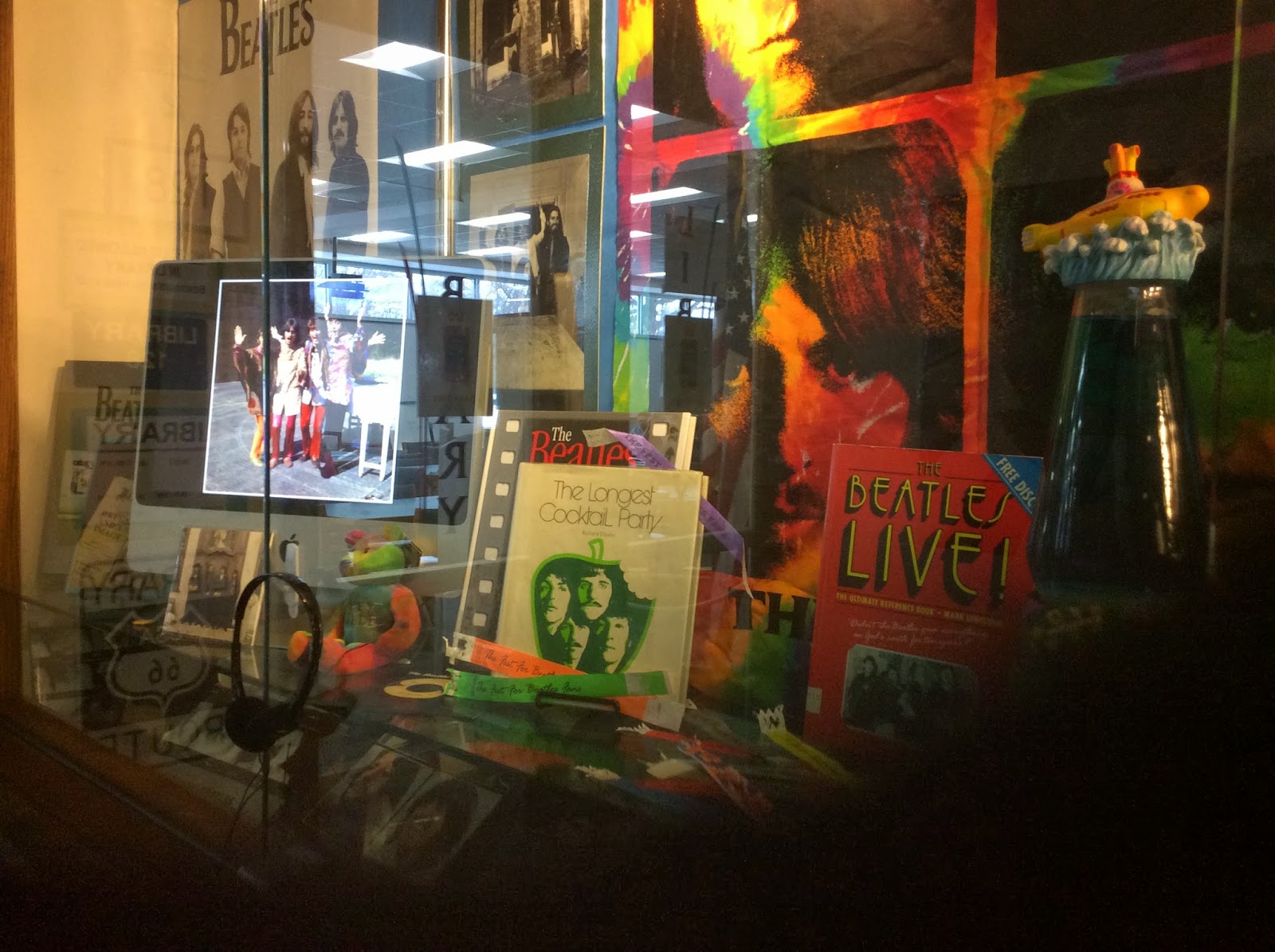 The AV crew at my school (Thanks, Brad!) came through again with two big IMac monitors to display slide shows in a never-ending loop: one slide show features black and white photos from the Beatles' first weekend in New York, accompanied by "Please Please Me"; the other is a sort-of history of the Beatles, featuring color photos accompanied by "Revolution."

As the first few days of February rolled on, I kept fiddling with the display, rearranging things here, adding things there. One of my colleagues (Thanks, Alexa!) was nice enough to lend me her Beatles lunch box, Beatles Russian nesting dolls, Beatle Beanie Babies, and tie-dyed Beatles tapestry (far-out, dude.) A few souvenirs from The Fest For Beatles Fans ended up in the display too. The last of the last-minute inserts were some replica vinyl singles from Record Store Day and a collection of my Fest for Beatles Fans wristbands.

I include the text below so that no one will be forced to pause the video and squint.

On February 7th, 1964, The Beatles landed at JFK Airport in New York (Pan Am Flight #101) for a series of appearances on the immensely popular Ed Sullivan Show. 30,000 teenagers played hooky from school to greet the plane's arrival with homemade signs and screams.

The Beatles appeared on the Ed Sullivan Show on Sunday, February 9th, 1964 to what was then the largest single television audience in history: over 73 million people saw the Beatles play and sing that night.

The Beatles then performed on Ed Sullivan the next three Sundays in a row, cementing their popularity with the American public. Their third appearance was broadcast live from The Deauville Hotel in Miami, Florida. Their fourth appearance was the only one not broadcast live; it was pre-taped before their first Sunday show.

Five weeks later, the Beatles achieved a feat that no other band or artist has ever matched. On April 4th, 1964, they made history by holding THE TOP FIVE spots on the Billboard magazine Hot 100 singles chart: 1) "Can't Buy Me Love," 2) "Twist and Shout," 3) "She Loves You," 4) "I Want To Hold Your Hand", and 5) "Please Please Me." Beatlemania had begun.

(posted above a selection of "Beatles rip-off" albums released in 1964 and 1965): I feel sorry for the grandmothers who bought any of the albums below for their grand daughters, thinking they had anything to do with "that group that Peggy loves so much." In the wake of the Beatles phenomenal success, many record labels rush-released albums by look-alike and sound-alike bands: the Manchesters, the Liverpool Lads, and the Buggs. I just imagine broken-hearted teens opening these on Christmas Day and wishing that Nana wasn't half blind.

(I didn't feel comfortable displaying the Beatles' famous "butcher cover" without an explanation): In June of 1966, Capitol Records released The Beatles’ Yesterday and Today album with quite a controversial cover for the time. It featured the Beatles dressed in butchers’ smocks with baby doll parts and raw meat strewn about them. Many thought this was a Beatles’ protest against Capitol Records and their constant "butchering" of their albums; US releases featured ten songs, compared to fourteen in the UK.  Robert Whitacker, who took the original butcher photo, denies that this was ever the case.

The album was first released only to radio stations; several hundred were sent out, while several thousand were already printed and ready for distribution to stores. Due to the immediate and massive negative reaction, Capitol Records decided to recall the album and replace the cover with a more traditional one.

Since so many of the “butcher” covers were already printed, Capitol decided to simply paste over the old cover with the new cover. This "pasted over" cover was sent out to stores by the thousands with Beatle fans none the wiser.  Eventually, the secret was discovered, and fans all over the country began peeling back their album covers to see if they owned a very valuable original “butcher” cover.

In September of 1969, John Lennon informed the other members of the group, privately, that he was leaving the Beatles. On April 10, 1970, Paul McCartney made it official with a press release announcing that he was quitting the Beatles. The sixties were over.

Here is the short video of the finished display.


I recently attended the 40th Annual Fest for Beatles Fans in New York City. Although I have been attending the Chicago Fest since 1979, this was my first Fest in New York. It was the bestiest. I actually got to meet and chat with Freda Kelly, the Beatles Fan Club secretary and subject of the new documentary Good Ol' Freda, a movie I enjoyed so much at the Chicago Fest that it became the subject of the very first "Drunk on Foolish Pleasures" column. I also briefly chatted with the movie's director, Ryan White, who told me that in the wake of the Chicago screening, he had actually read my column here at FTM. 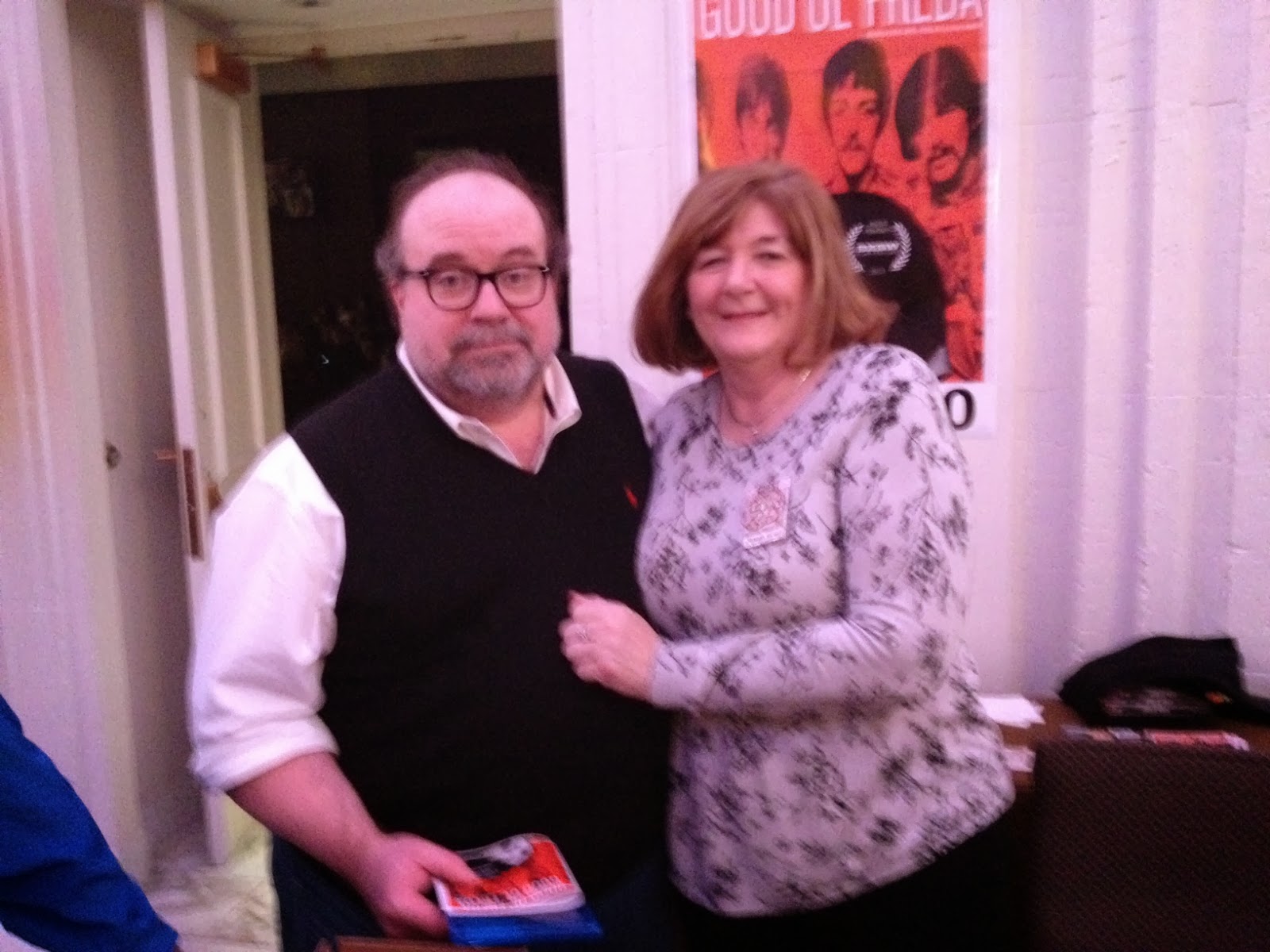 Wow! This brings me one person closer to meeting PAUL.

TOTALLY NOT LAST MINUTE ADDENDUM: The Beatles released four of the best rock and roll movies ever made: A Hard Day's Night, Help!, Yellow Submarine, and Let It Be. So you see, this post has EVERYTHING to do with MOVIES. 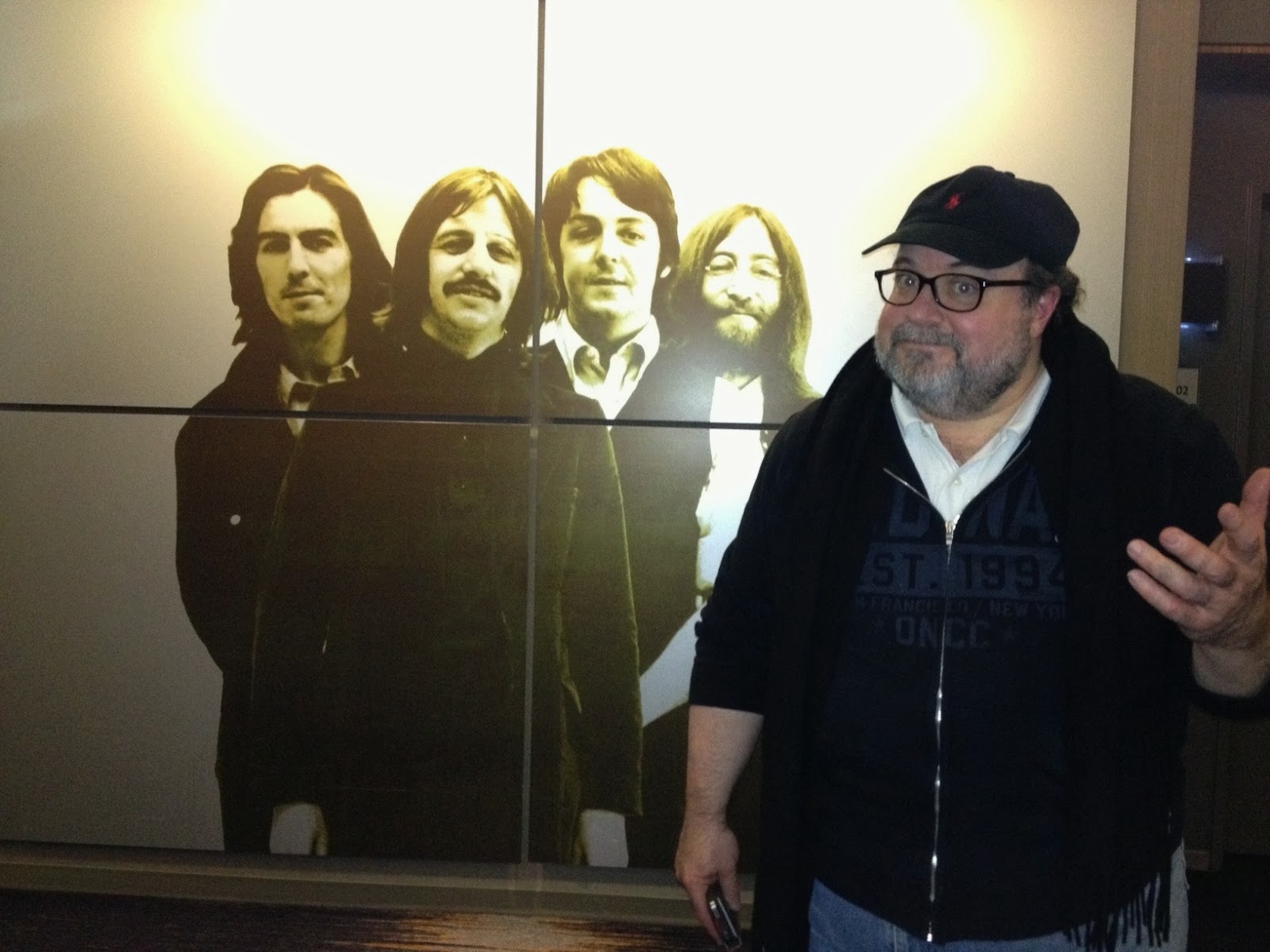