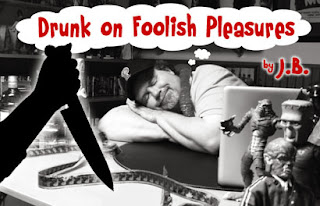 Recently, I designed a display case to give my students something to look at and think about for Halloween.

I used to fill the display case outside the library of my school on a fairly regular basis. I designed displays for the fortieth anniversary of the JFK assassination, displays commemorating the Beatles’ impact on popular culture, and about every other October, I would fill the display with my extensive collection of horror memorabilia. The students seemed to dig it, dig it the most. I received much positive feedback from students and staff down through the years.

But I found that I had not designed a display case in six years. Seems a staff member who shall not be named (Voldemort) thought the display was offensive and inappropriate, two adjectives that have been so consistently applied to my work that I consider them my de facto middle names. I guess I was blacklisted from the display for a time. Long story short: Voldemort retired; I am back doing display cases.

Understand that the display case I speak of here is huge: four feet high by thirty feet wide. It takes a lot of “stuff” to fill it.

I had forgotten during my six years in exile how much time and effort it took to do the display. Between hauling everything to school and trucking it down to the library, it was hours. I would like to thank my first hour Humanities class for helping me to “bucket brigade” some of the bigger pieces to their required destinations.

I also need to thank the librarians at my school for being so cuddly and supportive.

First, we had to cover the obnoxious yellow background of the display case, as that bright color was not in keeping with the creepy mood I wanted to create: 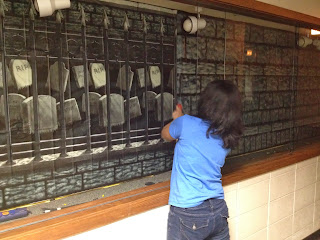 I wanted to place something really eye-catching every five feet or so. I decided that the “visual anchors” of this display would be life-sized busts of Nosferatu, the Creature from the Black Lagoon, and the Teenage Frankenstein Monster: 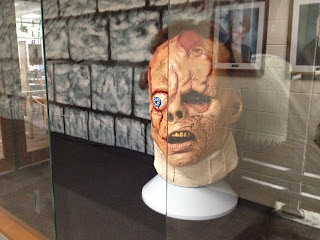 At the very end of the display case, I placed a life-sized skeleton reading a book. I thought that would provide an interesting visual transition to the doors of the library: 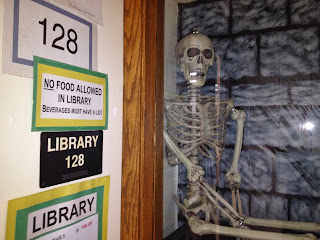 Next, I spaced out the 18” Sideshow Toys figures I was using to illustrate in three dimensions the classic movie monsters that were the focus of the display’s text. The finished display wound up containing eight of these large figures: 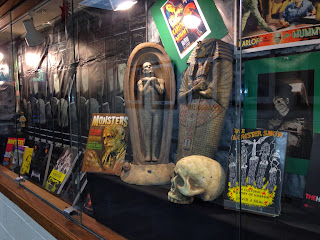 Because it is my duty to edumacate my students as well as to entertain them, I chose to focus this year on the literary antecedents of classic movie monsters and proceeded to fill the display with as many representative novels as I could get my hands on: 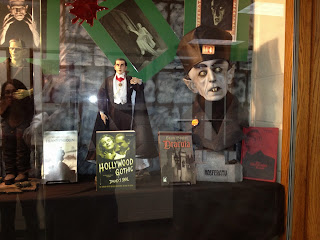 The left side of the display, nearly finished except for the explanatory text panels, which I added last: 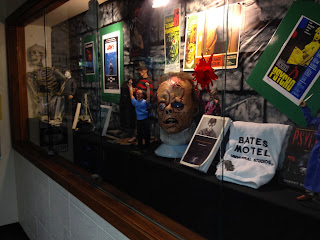 At the last minute the AV crew at the school came through with two big IMac monitors to continuously run two slide shows I had put together in a never-ending loop. One slide show features the original poster art for all the films mentioned in the display; the other features newly commissioned art from the Alamo Drafthouse in Austin, Texas.

As the first few days of October rolled by, I kept canoodling with the display, rearranging things here, and adding things there. The last of the last-minute inserts were 12” figures of Christopher Lee as Dracula and the Creature to bookend the slide shows, and the MacFarlane Toys’ Regan figure to sit next to a copy of The Exorcist.

Here is the text I posted, followed by a short video of the finished display. I include the text below so that no one will be forced to pause the video and squint.

TEXT PANEL #1:
Most of the monsters we all know and love come from classic literature.

TEXT PANEL #3:
We have “the vampire” (from Bram Stoker’s Dracula), “the ghost” (from Henry James’s The Turn of the Screw), the “shape-shifter” (from Robert Louis Stevenson’s The Strange Case of Dr. Jekyll and Mr. Hyde), and “the thing without a soul” (from Mary Shelly’s Frankenstein).   Even though the original, “literary” shape-shifter was Stevenson’s Dr. Jekyll, the most famous one in popular culture is the werewolf or wolf man. (Team Jacob!)

TEXT PANEL #4:
The Mummy seems to be a re-working of the ghost archetype: the spirit of someone long dead, who has come back to seek revenge.

TEXT PANEL #5:
The zombie, arguably the most popular monster in our current culture, seems to be a combination of ALL FOUR archetypes.

TEXT PANEL #6:
In the 1950s, these archetypes are repurposed for a large, teenaged audience eager to get out of the house and go to the movies.  We get a “Teenage Frankenstein” and a “Teenage Werewolf.”

TEXT PANEL #7:
The Creature from the Black Lagoon and Quasimodo in The Hunchback of Notre Dame have something is common; their only sin is to love and be rejected.

TEXT PANEL #8:
Norman Bates, in Alfred Hitchcock’s Psycho, is a classic shape-shifter. He is “normal,” but then changes into something… Something bad.

TEXT PANEL #9:
Most modern monsters seem to be variations on “the thing without a soul:” misunderstood but unstoppable engines of evil.

TEXT PANEL #10:
Most of the novels in this display can be downloaded FOR FREE from Amazon’s Kindle store or from Apple’s IBooks store and read on laptops, IPads, smartphones, and other devices.

Posted by Patrick Bromley at 11:57 AM