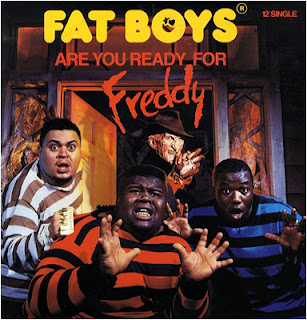 There is a surprisingly high number of horror movie anthems, and a surprising group of movies that feature songs written specifically for them. I'm not talking about scores or theme music -- this isn't John Carpenter's Halloween theme. I'm talking about bands recording songs for horror movies, usually to be played over the end credits. Most of these, you'll notice, come from the 1980s. That's because every movie had a theme song attached to so that a video could be made and a soundtrack album released in stores. There is no real reason for most of these horror movies to have pop music tie-ins, but there they are. Spoilers: most of the songs are bad.

There are no doubt several horror anthems that you will immediately suggest should be on the list. Keep in mind that these weren't chosen because they are the best. But they were chosen for their own reasons.

1. "He's Back (The Man Behind the Mask)" by Alice Cooper, from Friday the 13th Part VI: Jason Lives (1986) A lot of '80s slasher movies used heavy metal as their soundtracks. Makes sense, as there is some crossover in the two fanbases. Alice Cooper is a metal icon, making him the perfect choice to provide an anthem for everyone's favorite hockey-masked murderer. So why does "He's Back," his anthem for Jason Lives, sound like safe '80s synth pop? This is perhaps the least threatening song ever written to signal the return of an undead serial killer.

2. "The Ballad of Harry Warden" by John McDermott, from My Bloody Valentine (1981) - The original My Bloody Valentine is the "working class" slasher movie -- it was designed that way by director George Mihalka. So it makes sense that its theme song would be a kind of Woody Guthrie "song of the people" imitation, even though it's weird that instead of focusing on the citizens of the small mining town of Valentine Bluffs, it's about the movie's killer. Working class murderers need a working class anthem too, I guess.

3. "Fright Night" by The J. Geils Band, from Fright Night (1985) - Fright Night is not the kind of horror movie that really needed a pop song playing over the end credits, but such were the '80s. Every movie needed a pop song and a video and a soundtrack album. While I don't watch the movie (one of my favorite vampire movies of all time) and immediately think "Get those 'Centerfold' guys in the mix!" the song is at least fun and upbeat just like the movie it's representing. Plus, it gets me walking around yelling "Fright! Night!" for hours after the end credits roll.

4. "Are You Ready for Freddy?" by The Fat Boys, from A Nightmare on Elm Street 4: The Dream Master (1988) No horror franchise has inspired more anthems than A Nightmare on Elm Street: there's Dokken's "Dream Warriors" from Part 3 and Iggy Pop's "Why Was I Born? (Freddy's Dead)" from Freddy's Dead: The Final Nightmare. But the fact that the theme from Part 4 finds him rapped about by The Fat Boys and that he stars IN THE VIDEO cements Freddy Krueger as the MTV slasher (he even hosted his own special on the network to promote the release of Freddy's Dead). It also strips away any remaining ounce of scary Freddy had left in him -- problematic, since there were three more movies left in the series (Wes Craven's New Nightmare not included, because that made Freddy scary again). This song and the accompanying video basically turned A Nightmare on Elm Street into Ghostbusters.

5. "Who Made Who?" by AC/DC, from Maximum Overdrive (1986) - More famous than the movie for which it was written, AC/DC's theme to Stephen King's first and last directorial effort is a good rock song in a bad horror movie. The band did all the songs on the soundtrack (making this their The Graduate), but "Who Made Who?" is one of the few original contributions. The existential nature of the song's title is about as deep as Maximum Overdrive ever gets.

6. "Just What I've Been Looking For (Angela's Theme)" by Frankie Vinci, from Sleepaway Camp (1983) Those of you who have been with us for a long time know that I'm fascinated by Sleepaway Camp (which, to be fair, was introduced to me by my wife), and this theme song makes a totally crazy movie completely fucking crazier. Knowing what I know about the movie, do the lyrics to this song completely miss the point? Or is it some kind of brilliant misdirection? There are a few lines that could be interpreted as references to the ending, but I don't know. Also, I love this song.

8. "Pet Sematary" by The Ramones, from Pet Sematary (1989) - I'm still trying to figure out how I feel about the film version of Stephen King's Pet Sematary. My opinions on the movie change with every viewing -- is it an honest examination of grief, ugly exploitation or both? There is one thing about which I have never been uncertain, which is that The Ramones' theme song kicks ass. Their album, Brain Drain, was one of the first CDs I ever bought just to have a copy of "Pet Sematary" (their cover of "Palisades Park" was just a bonus). Even during those viewings in which I'm less in love with the film, this song sends me out on a happy note. It almost lets me forget about Zelda. ALMOST.

9. "Maniac Cop Rap" by Jay Chattaway, from Maniac Cop 2 (1990) I want to goof on this one for being the "T-U-R-T-L-E Power" of horror movies, but because it's from a Bill Lustig movie I suspect the decision to include it was consciously tongue-in-cheek. A mediocre rap packed with a bunch of references to the movie is very much in keeping with the spirit of the Maniac Cop series.

10. "Prom Night" by Paul Zaza and Carl Zittrer, from Prom Night (1980) As far as I know, this is the only horror movie anthem that's a disco song. FEEL THE HORROR OF DISCO.

11. "Is There a Phantom of the Mall?" by The Vandals, from Phantom of the Mall: Eric's Revenge (1989) The Vandals are a legendary punk band. Why they contributed the theme song to a terrible, barely-released Phantom of the Opera "update" is beyond understanding. Maybe it was some sort of punk rock stunt -- like "Anyone can do the song to a good movie. Let's write the theme for a real piece of forgettable shit!" Either way, the song is the best thing about the movie. Who could forget lyrics like "Is there a phantom in the mall? Folks are bound to ask. Is there a phantom in the mall? Or just some retard in a broken hockey mask?" Suck it, Bob Dylan.

12. "The Chucky Song" by Simon Stokes, from Child's Play (1988) First of all, I have to credit my friend Heather Wixson (@thehorrochick) for alerting me that this song even exists. Apparently, it was almost used over the end credits of the original Child's Play. Can you imagine if that had happened? It would have easily brought that movie down 10 points. This is the "Pac-Man Fever" of horror anthems. The "Curly Shuffle," if you will. Putting it over the end credits wouldn't just have dated the film horribly, it would also have turned the whole thing into some stupid campy joke. And the sequels would eventually take care of that themselves.

13. "Shocker" by The Dudes of Wrath, from Shocker (1989) It was tough to pick a song from Shocker, director Wes Craven's attempt to recreate his Nightmare on Elm Street success and create another horror movie icon in Horace Pinker (he did not). That's because Shocker might be better remembered for its metal soundtrack than for the movie. There's Megadeth's cover of Alice Cooper's "No More Mr. Nice Guy" (which was also the movie's tagline). There's Dangerous Toys' "Demon Bell (The Ballad of Horace Pinker)," which obviously pays tribute to the film's villain. Ultimately, though, I had to go with this title song by The Dudes of Wrath, a supergroup featuring Paul Stanley of KISS. He's the only guy alive who could call his band The Dudes of Wrath and NOT BE KIDDING.

15. "Cat People (Putting Out Fire)" by David Bowie, from Cat People (1982) Saving the best for last. Few horror movies attracted musicians as iconic as David Bowie to record their theme songs, which is just part of what makes director Paul Schrader's remake of Cat People the unique little snowflake it is. The song does a great job of capturing the mood of the film: it builds in a way that's dreamy and sexy, finally exploding with energy like a person turning into a cat when she fucks the dad from Home Alone. And of course this one gets bonus points for being used to even better effect by Quentin Tarantino in Inglourious Basterds.
Posted by Patrick Bromley at 7:36 AM