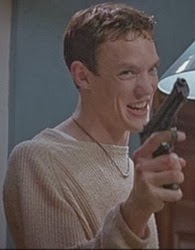 I re-watched Wes Craven’s Scream last weekend and was surprised how well it has held up. I used to love it back when I was a teenager. I think I like it even more as an adult. As I watched the scene with Jamie Kennedy and Matthew Lillard in the video store, it suddenly occurred to me how GREAT Matthew Lillard’s performance is in Scream. I was somewhat taken aback. The guy from Serial Mom, Hackers, Scooby-Doo and Without a Paddle was giving a terrific performance? What’s going on here?

These questions took me back to when I was a young kid that loved movies but didn’t necessarily understand why he loved them. In 1989, I learned what works for me in film acting. I was watching an episode of Siskel & Ebert with my family, and they were talking about The Fabulous Baker Boys and praising Michelle Pfeiffer’s performance -- specifically her confidence, charm and believability. Those concepts were a little ahead of me, so I asked my Dad to explain it to me more simply. He said something perfect which I have never forgotten: “Are they interesting or fun to watch?” You could write books on acting and not summarize good acting better than that. To this day, I remind my Dad about what a great comment that was and how it informed my perception of if a performance is working or not working for me. 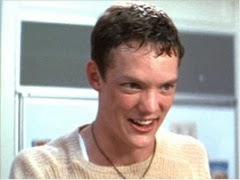 Back to Matthew Lillard in Scream. Using the Siskel & Ebert scale, is he confident as the character Stu in Scream? Absolutely. He seems to know this party guy inside and out. He understands that just because he’s one of (SPOILER) two killers in the movie doesn’t mean it would do an inside-out on his personality. Stu is a party guy and practical joker who chooses not to see the moral and legal wrongfulness of murder. His default is party guy and jokester, not murderer. That’s an action he chooses, not a personality. Even when revealed as a killer, he’s still Stu the Party Guy. What an interesting acting choice.

Is he charming? Yes, he is. Even though he’s a psychopath, you can understand why people are drawn to him. He’s a fun guy that doesn’t take things seriously, which somehow makes his character even more frightening -- more frightening than Billy Loomis, anyway. One thing that strikes me about Matthew Lillard in Scream is that everyone has met a Stu in their life, whether it’s in high school or otherwise. Now, think if your Stu had no problem murdering you. It’s terrifying.

Little moves Lillard does in the movie are incredible. Remember the scene where Lillard is leaving school with Neve Campbell and Rose McGowan and he’s twisting their arms to come to his house for what will turn out to be the climatic bloodbath party? When they say yes, he does this fist pump as they walk away. Knowing what you know about his character up to that point, it’s believable Stu would do that. When you know he’s a killer, it adds another layer. He’s happy because his plan to have a killer party (pun intended) is in motion. That’s chilling.

I love so many things about Lillard in Scream. I love how he’s more likely to fuck up than Billy and say something incriminating (“I ought to gut your ass in a second, kid.” “There’s no way a girl could have killed them.”). I love how the words he uses imply that he learned violence from hunting, which is believable. It’s spooky how he chooses an ex-girlfriend (the Drew Barrymore character) as one of the first victims. It’s devilishly weird how he teases that he’ll protect his girlfriend from the killer (“Yo, I am so buff, I got you covered, girl.”). It’s creepy how he thinks that Neve Campbell’s mom being promiscuous is only wrong because she doesn’t look like Sharon Stone. It’s funny how he’s worried that his parents will be mad at him. He makes so many interesting choices, and whenever he’s on screen he is the most fun person to watch. You sit up a little more and take notice. And I really, really dig his last line (which I heard somewhere was an ad-lib) “I always had a thing for you Sid!” because that’s what would be on his mind: girls. Or something even less serious. Even in death, he’s making jokes.

Did you ever wonder about Stu’s motive? Is it really “peer pressure” like he says? How did Billy know that Stu would go along with him? What if Billy brought it up to him and Stu was not on board? That would have been awkward!

It’s been mentioned on F This Movie! that sometimes an actor (like Seth Rogen) does not get the credit he or she deserves because the performance style is so naturalistic. Matthew Lillard in Scream falls into that camp. It’s confident, charming, believable, interesting, fun to watch performance and always in harmony with the tricky, devilishly fun tone of the movie itself.

More Great Horror Performances
JB on Anthony Perkins in Psycho
Heath Holland on Piper Laurie in Carrie
Posted by Patrick Bromley at 11:47 AM