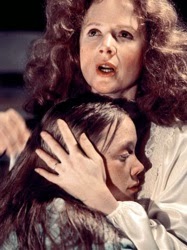 Shhhh! I’m writing this from my prayer closet.

Piper Laurie freaks me out. Well, to be more specific, it’s her performance in Brian De Palma’s 1976 film version of Carrie that really gives me the chills. I mean, I know she’s an actress who did an incredible job of realizing a character, but there’s a part of me that sees her AS her character.

I suppose what bothers me the most about Laurie’s performance as Carrie’s mother Margaret White is that she plays a character who is only slightly outside the world in which we live. Margaret White is the most pious and zealous of Christians, quick to condemn and full of arrogance and superiority. When Carrie says or does something that doesn’t fall in line with Margaret’s own twisted morality, she’s sent to a dark closet with a light-up Jesus and a bible so that she can repent and pray until atonement has been made. 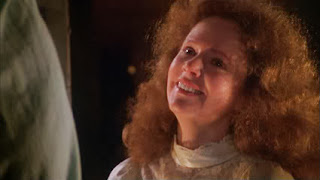 Laurie plays this with the unmovable assurance of one who is positive that her methods are justified and “holy.” It’s a dangerous thing to believe that you’re better than someone else, but it’s even more dangerous to believe that you are one of a few chosen people who has all the answers and the rest of the world needs to be saved or condemned.

This is the starting place from which Piper Laurie seems to build her performance: Margaret White is just such as person, full of her own answers. The world is evil. Her daughter is evil. And apparently, hair conditioner is evil. Clearly all is not well in her head, and she has taken such a manipulative and controlling position in Carrie’s life that she has become the sin that she believes she stands against, failing in even the basic functions of being a mother in the belief that she is saving her daughter’s immortal soul from the fires of hell. 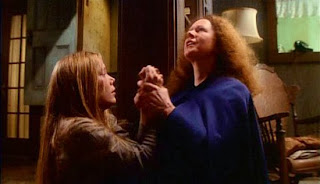 I’ve not read the Stephen King novel, but I do know that he excels at writing believable, fully-formed characters. His evil antagonists have a believability about them that makes them even scarier, and Piper Laurie brings that realization to the screen in a way that completely sets me on edge. Like Marcia Gay Harden in The Mist, Piper Laurie plays a broken person who seems to have lost everything except religion and now spews fire and brimstone in place of compassion and humility.

Laurie’s note-perfect performance and understanding of what makes the character scary bring the role off the page and into real life. It’s chilling. It’s subtle and quiet at times, then full of justified rage at others, but at no point does it ever cross into parody. It’s always grounded in reality, in the people that we interact with in our own lives.

That believability is what gives the performance its power. Because Margaret White starts from a place of spiritual superiority, which is absolutely something many people feel, she is able to stretch that role into the fringes of sanity. The implication of the performance is that these people could be all around us and that the minute someone crosses the line, another Margaret White can be born.

Both Sissy Spacek and Piper Laurie were nominated for Academy Awards, which speaks to the power of Carrie. Horror is notoriously overlooked each year during awards season. Clearly, Carrie transcends traditional boundaries because of the sympathetic nature of the story, Sissy Spacek’s innocence and the chilling performance given by Piper Laurie. 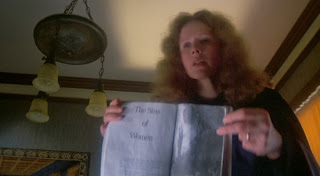 It’s been almost four decades since Carrie was released, and some say the movie is dated. True, fashion has changed and some of the filming techniques used feel grounded in the 1970s. But the movie still packs a punch today, largely because of Piper Laurie’s righteous villain. True evil is timeless.

More Great Horror Performances:
JB on Anthony Perkins in Psycho
Posted by Patrick Bromley at 7:38 AM