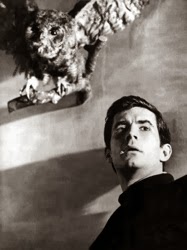 Anthony Perkins’ portrayal of Norman Bates was so unique, superb, and ground breaking that he could never play anyone else for the rest of his life. 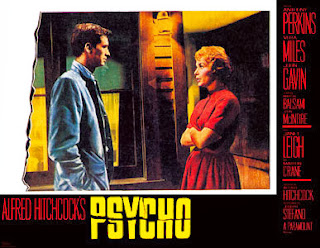 For almost thirty years, I have been screening the original Psycho in my Film Studies classes; other films have alternately joined or left my syllabus, but this Hitchcock film has been a constant. Critics rave about Joseph Stefano’s clever script, Robert Bloch’s strong source material, Hitchcock’s assured direction, and the unique score by Bernard Herrmann, but not enough attention is paid to the performances. I feel that, with the possible exceptions of Bela Lugosi in Dracula (1931) and Boris Karloff in The Bride of Frankenstein (1935), Anthony Perkins’ Norman Bates is the single greatest performance by an actor in a horror film.

First we need to remember that, in 1960, Perkins was playing against type; until Psycho, he had been nearly typecast as a juvenile teen heartthrob, another Jeffrey Hunter. Although his performance in 1957’s Fear Strikes Out hinted at darker things to come, he was still the boy next door, even when famously climbing that backstop and having a nervous breakdown as baseball’s Jimmy Pearsall. His performance in Psycho put an end to that sort of typecasting. 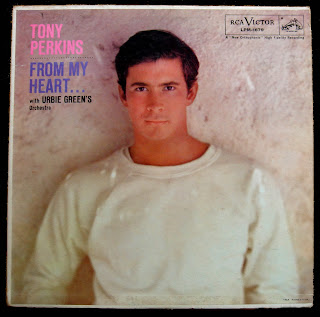 Proof of this amazing and subtle performance can be found in the longest single scene in Psycho, about halfway in. Norman invites Marion Crane for some supper in the little parlor behind the motel office. The two talk. Astute viewers can pick up major clues about the story’s secrets in this scene, merely by noting Perkins’ schizophrenic body language. Norman repeatedly contradicts himself, but this cinematic gamesmanship is not confined to the script itself. Someone (Stefano? Hitchcock? Perkins himself?) constructed a kind of “movement code” for Norman in this scene, and his camera blocking is very telling.

When Perkins sits back, he is Norman: relaxed, likeable, and kind of goofy. Whenever he retreats from a strong statement and contradicts himself, he returns to this position. (“The rain didn’t last long.” “Of course, I’ve suggested it myself.”) When Perkins leans forward halfway, he is both personalities and manifests the conflict between the two. (“Sometimes, I’d like to go up there, and curse her, and leave her forever, or at least defy her.”) It is in this position that he seems to be arguing with himself. When Perkins leans forward all the way, he is manifesting only Mother’s personality and it is here he is at his most caustic and cutting. (“People always call a madhouse ‘someplace.’ Have you ever seen one of these places—the laughter and the tears and the cruel eyes studying you?” “What do you know about caring?”) 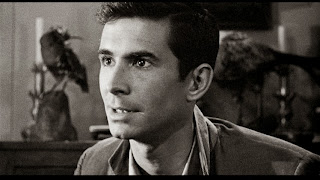 Hitchcock was maniacal for actors hitting their marks—no one would dare mess up his carefully chosen shots—but he was not known to direct their actual performances, thinking that was part of their job as actors. This scene’s blocking may not have been 100% Perkins’ doing, yet it is certainly Perkins who sells the movement, makes it part of a larger whole that seems natural and not premeditated. It is an incredible nine minutes.

I am impressed by all of Perkins’ line readings, but I think the piece de resistance may be what he brings to one of the film’s simplest lines: “She needs me.” Think about those three words—say them aloud. Most of us would emphasize the word “need,” wouldn’t we? “She NEEDS me.” Yet Perkins emphasizes the word “me”: “She needs ME.”  There is something so uncanny about that reading, so right for the material – it speaks volumes about the complicated relationship between Norman Bates and his mother. The character of Mother is not defined by her need; she is defined through Norman, and Perkins was astute enough to puzzle this out and manifest that through his line reading.

Let us not forget that even though that is not his voice at the end as Mother, it is certainly his now-famous grin in the film’s penultimate shot, one of the most indelible images in all of horror cinema. 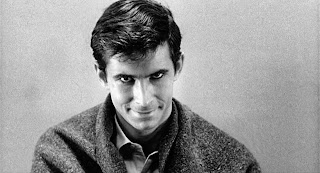 Perkins wound up retreating to Broadway, where audiences were more receptive to him playing other roles. (FUN #SCARYMOVIEMONTH FACT: Perkins initiated the role of Tandy in Bruce Jay Friedman’s Steambath on Broadway. Also in the cast was a young Eileen Dietz, who doubled for Linda Blair in The Exorcist and whose face lies beneath the famous “Captain Howdy” make-up.)

In Hollywood, Tony Perkins was never allowed to waver much from Norman Bates or move beyond the character he helped create with this outstanding performance. It was the curse of typecasting, and the real horror behind this little horror tale.
Posted by Patrick Bromley at 11:29 AM