WARNING: After that terrific first drop, it's downhill all the way.

Rollercoaster suffers from a strange sense of dramatic construction. Usually, after a brief period of exposition, a narrative will treat the audience to a series of dramatic incidents that rise in importance and drama until we reach a climax. Rollercoaster reaches its dramatic high point fifteen minutes in; everything after that represents a series of missed opportunities and anti-climaxes.

Imagine Jaws if, after the first shark attack at the beginning of the film, we never saw the shark again.

Stephen King once observed that, when dealing with horror and suspense, filmmakers and novelists can scare an audience for a long time with the mere threat of "what's behind the door." Eventually, however, that door must be thrown open, for good or ill. Rollercoaster is convinced that after the moderately exciting coaster derailment in the first act, mere suspense will carry the day and that no real payoff is necessary at the end of the film. 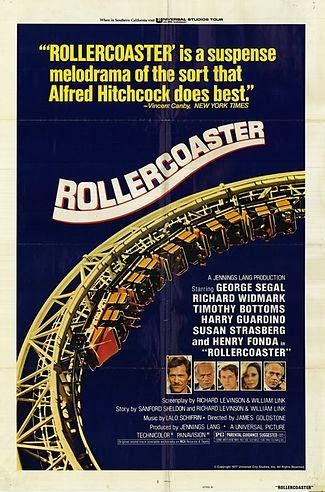 I keep wondering if this script even began its life as a disaster film. It seems more like a slice-of-life drama or policier with the rollercoaster/disaster film/Rumble-rama elements awkwardly pasted onto it during some executive meeting. Could a very different Rollercoaster have been in Universal's development pipe, only to receive a last-minute script graft/Sensurround makeover because Universal executives wanted a "make good" for all the theater owners who had installed expensive Sensurround equipment only to get burned by the crappy box office results of the previous summer's disappointing Universal Sensurround film, Midway?

Boy, that sentence is as long as Rollercoaster seems.

Strike that - nothing is as long as Rollercoaster seems. 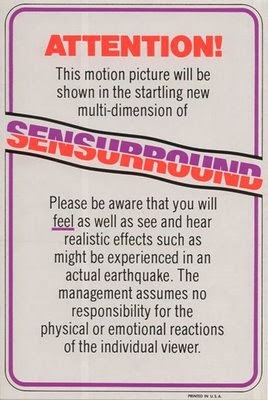 I believe that I am on to something with this theory because, in its bones, Rollercoaster bears more similarities to Dirty Harry than to Earthquake. There is an interminable scene halfway through Rollercoaster in which Harry Caulder is sent on various fool's errands around an amusement park (a sort-of reverse wild goose chase) in order to drop off extortion money. This scene is a rip-off of a similar, better sequence in Dirty Harry. What is the main difference? In Dirty Harry, the sequence ends with Clint Eastwood grinding his heel into the villain's open gunshot wound on the fifty yard-line of an empty football stadium as the villain screams for his lawyer and a helicopter shot takes the audience up and up and away. In the Rollercoaster sequence, Harry buys a hat.  AND HE DOESN'T EVEN KEEP THE HAT.

In fact, very few things work at all in this stinking shambles of a film. We get Universal's patented "ugly Seventies" set design and flat, television-series lighting. Lalo Shifrin provides a dreary, on-the-nose score that features Bernard Hermann-inspired Psycho strings whenever Timothy Bottoms is onscreen. (Steve K., I know you like this score, but I consulted a panel of learned musicologists [I did not do that] before forming my final and definitive opinion. Definitive.) Timothy Bottoms makes some interesting choices as the terrorist/extortionist, but I would argue that none of those choices work. He chooses to underplay his role and gives us a human being without affect or emotion. As it turns out, a performance WITH affect or emotion (whatever that emotion might be) is more interesting and compelling than a performance without. Richard Widmark virtually defines the phrase "phoning it in," playing his standard stick-up-the-ass bureaucrat. Henry Fonda shows up for five minutes as Harry's boss, so the filmmakers could show him on the film's poster and Fonda could give the worst performance in the film.

Rollercoaster also breaks, subverts, or thumbs its nose at almost every convention of the genre. Let's take a look:

1. The Disaster Should Be The Result Of Natural Forces. Nope - just one poor mope's greed.

2. It Could Have Been Prevented If... There were no greedy people in the world. Epic.

3. No One Listens To The Guy Who Knows (GWK). Actually, Rollercoaster excels at this one. The George Segal character is shown to be brilliant -- so brilliant that he practically solves the whole damn case twenty minutes into the film by uncovering an important clue. Then a minor character talks him out of it, and it is never mentioned again. The problem here is that, as a pencil-pushing carnival attraction inspector, Segal's biggest dramatic confrontation in the whole film is convincing his boss to let him fly to Chicago. Because how to expense round-trip coach airfare is the rich soil from which drama can grow.

4. The Film Must Tease the Audience With Suspenseful Foreshadowing. Is there a word for the opposite of foreshadowing -- maybe "ass-shadowing"? I know it's a thing, because Rollercoaster does it. We assume the cool rollercoaster sequence at the start of the film is foreshadowing for bigger things to come, and we are wrong. Turns out that this is not foreshadowing, it's the misplaced climax of the film.

5. No More Than One Hour Should Go By Before The Shit REALLY Hits The Fan. Again, the only "good stuff" occurs in the first ten minutes. What a cheat.

6. There Should Be Too Many Characters. Rollercoaster has too few, far too few. And what characters there are, are misused. Why introduce Segal's girlfriend and daughter IF YOU DON'T PUT THEM ON THE GODDAMN ROLLERCOASTER AT THE END? In fact, (big spoiler for Rollercoaster) - besides Harry and the killer, not one character who utters a line in this movie EVER rides a rollercoaster.

7. The Audience Should Glimpse Plenty Of Bad Behavior. A disaster movie should be chock-full of terrified minor characters and extras clawing each other for survival. The extras in Rollercoaster don't even know they're in danger -- they're not trying to salvage the last shreds of their dignity in the face of abject terror, they're milling in line.

8. Selfish, Awful People Should Die. Well, I'm not sure how awful or selfish they were, but the people who die on that first rollercoaster calamity are ciphers. We learn nothing about them at all, except they are doomed. The obvious mannequins that take their places during the special effects shots might have just as soon played these characters during the film proper.

9. Completely Innocent People Should Die Too. In my humble opinion, not enough of them die. Not nearly enough. 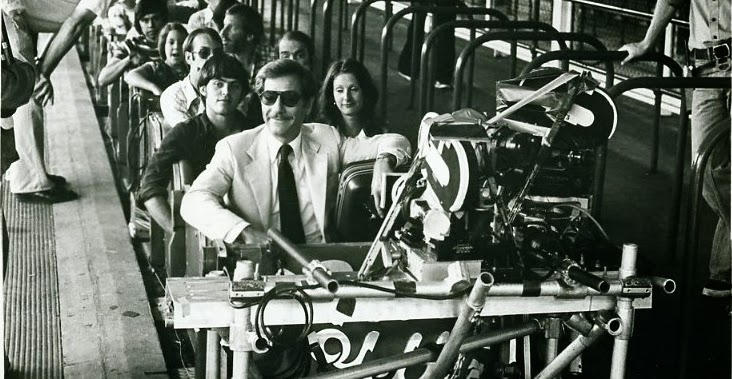 Because Rollercoaster is lacking any component we might find entertaining, my wife made up a fun game to amuse herself. After watching Rollercoaster, write yourself a more compelling ending! It's easy and fun. What if Segal's main squeeze and daughter WERE on that final bomb-carryin' rolleycoaster ride? That would up the stakes. My wife's fevered little imagination spun quite the tale, with a perilous dark tunnel - faces lit by nothing but gunfire - well, ask her about it next time you see her. She'll act it out for you at length.

MAJOR SPOILER ALERT: In fact, the entire script goes topsy-turvy at the end. Our mad bomber is supposed to be really smart, yet after he is fatally shot and pursued by police, instead of trying to escape the park, he moseys around in a perfect circle just so he can end up directly in front of Segal (who hasn't moved since shooting him) and the filmmakers can wield the enormous-brown-shit-hammer-of-obviousness by having the mad bomber STRUCK AND KILLED BY THE VERY COASTER HE WAS ATTEMPTING TO DESTROY.

The drama in Rollercoaster is worthy of the ancient Greeks.

My favorite made-up ending involves a loose plot thread that is never sewn up. Let's go with Rollercoaster's risible original ending, but I would add just one more shot. The mad bomber is killed. Justice is served. George Segal slowly walks away. The concluding crane shot begins; the camera moves slowly back, following Segal in the foreground as he walks toward the exit of the amusement park. Suddenly in the background, the rollercoaster explodes! The bomb was still on the coaster! In all the fuss and feathers about the bomber dying, everyone forgot about the LIVE BOMB. Fire and smoke bellow into the sky. The titanic explosion echoes across the crowded park, which comes alive with screaming, terror, and utter chaos. Thousands die. Segal bends to light his cigarette on a fallen, still-burning ember of the rollercoaster and, without turning around, slowly walks away.

FIN
Posted by Patrick Bromley at 11:58 AM