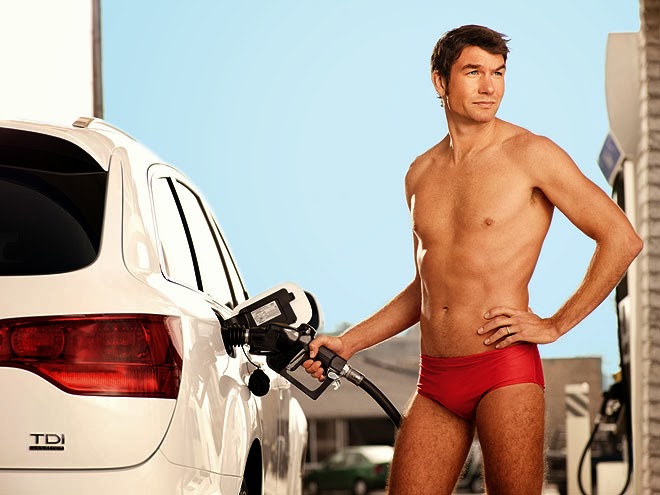 Jerry O'Connell is in the news a lot lately because of his "I'm Sorry Too" exhibit set up next to Shia LeBeouf's bullshit performance art installation "#IAmSorry in Los Angeles. It's really funny and literally the only good thing to come out of Shia's stupid fake meltdown. It's also another reminder that Jerry O'Connell is a wonderful goof who doesn't get the credit he deserves.

I'm not sure why a lot of people refuse to take Jerry O'Connell seriously. Maybe it has something to do with Kangaroo Jack. Maybe it has to do with the fact that every six months he has a new TV show being canceled (RIP We Are Men and Mockingbird Lane and The Defenders and Carpoolers and Do Not Disturb and Crossing Jordan) or that his brother was on The Bachelor or that he's married to Rebecca Romijn, which some people have called a mismatched pairing. But O'Connell is a guy who has worked steadily since the mid-'80s and avoided the pitfalls of being a child actor, building up a fascinating resume of mostly supporting roles and character parts despite his leading man looks. O'Connell is a silly guy who never takes himself too seriously, and though he doesn't always have great taste in picking projects (I'm looking at you, Tomcats) he is capable of being really great in the right movie. Best of all, he is consistently underestimated. That makes it easier for him to surprise us. Here are five great, surprising performances from Charlie O'Connell's brother: 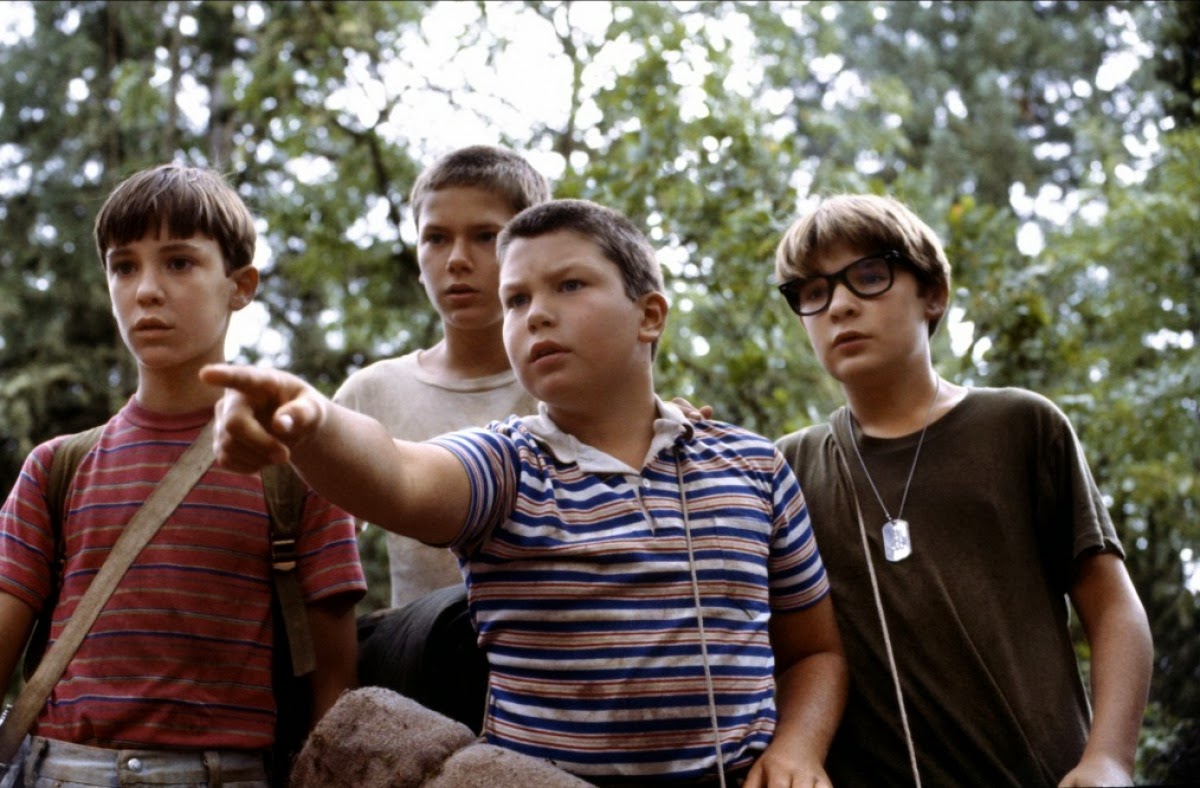 1. Vern Tessio, Stand By Me (1986) Rob Reiner's coming of age classic is often championed as a showcase for young acting talent, whether it's River Phoenix proving early on that he's the best actor of his generation or Wil Wheaton stealing our hearts as the sensitive, thoughtful lead or Corey Feldman doing good work before becoming one half of a Tiger Beat punchline. The performance that doesn't get acknowledged nearly enough is Jerry O'Connell as chubby Vern Tessio, the sweetest and simplest kid in the bunch. He's the Cowardly Lion. The Chunk. The one who says things that cause the other boys to roll their eyes and make fun. But Vern is the heart of the group (Gordy the brain, Chris the soul, Teddy the balls), often acting as the voice of reason. It's easy to dismiss him as the comic relief, but O'Connell's performance is my favorite in the movie (which is saying a lot, because everyone is really good) because he's the most natural and sincere. Each of the other three boys gets a big emotional moment, but not Vern. He's the rock. Long live cherry flavored Pez. 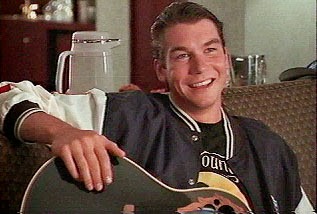 2. Frank Cushman, Jerry Maguire (1996) O'Connell didn't have much a film career in the '90s, working mostly in television (most notably My Secret Identity, the favorite show of F This Movie!'s Doug, which went off the air in 1991). His official big screen comeback came with 1996's Joe's Apartment, the MTV-produced film in which he starred opposite cartoon cockroaches. His actual big screen comeback was a small role in Cameron Crowe's romantic comedy Jerry Maguire, in which O'Connell plays unsigned quarterback Frank Cushman, the last best hope of Tom Cruise's titular sports agent. I love how O'Connell makes Cushman both stupid and entitled in the course of just a few scenes; he's a guy that's never needed to be smart because he's good at football and people have always catered to him. Watching him badly strum Nirvana's "Something in the Way" while surrounded by a group of handlers fighting over his future isn't just a great example of his detached dopiness -- it's also writer/director Crowe's statement on how the passion and integrity of artists like Kurt Cobain had, by 1996, been totally co-opted by the Ambercrombie crowd. 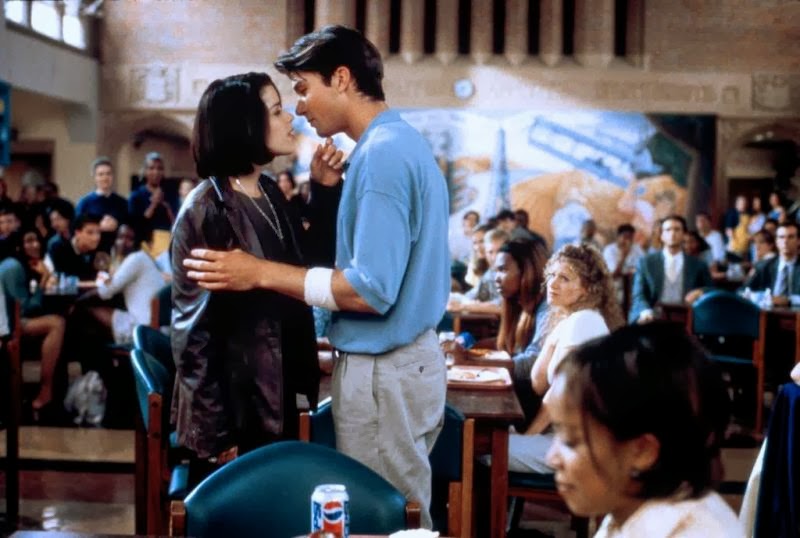 3. Derek, Scream 2 (1997) Here it gets tricky. And SPOILERY, if you haven't seen Scream 2. O'Connell's performance as Derek, Sidney Prescott's college boyfriend, seems very simple on the surface -- he's a decent guy, kind of a fratboy type, but he loves his girlfriend. But watch the movie again and you'll start to appreciate just how clever O'Connell's work is: informed by what we know from the first Scream, we (and Sidney) aren't sure whether or not Derek can be trusted. O'Connell plays every beat as though it could be taken either way. His cafeteria rendition of "I Think I Love You" is embarrassing in its sincerity, leading savvier audiences to suspect it has to be masking something insidious. By the time the movie's endgame has played out, we can finally see Derek for who he really was, and the story becomes incredibly sad. Scream 2 plays with O'Connell's nice guy image by making him a truly nice guy. In a horror movie, that's a big twist. 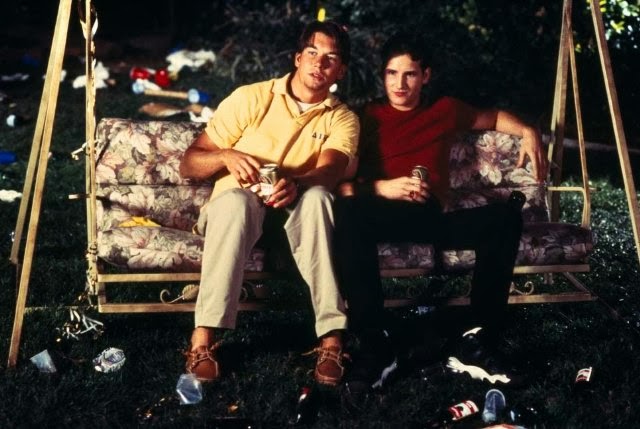 4. Trip McNeely, Can't Hardly Wait (1998) It's strange to think that by 1998, Jerry O'Connell had become a kind of elder statesman for the teen movie genre. But his cameo in Can't Hardly Wait is the best scene in the movie; all the chaos and noise stops for O'Connell to step in and deliver a fully formed performance that comments on exactly the kind of BMOC fratboy douche everyone assumed the actor was in real life. In just a few minutes, O'Connell tells the entire story of this character. He's funny and tragic at the same time, and even his burps demonstrate better acting than most of the movie's cast. Jerry O'Connell steals this movie. 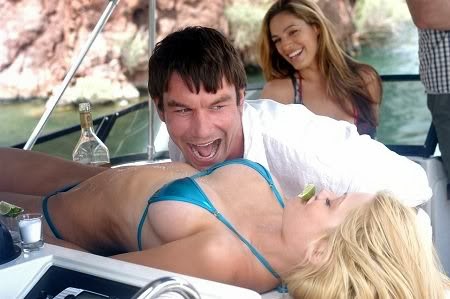 5. Derrick Jones, Piranha 3D (2010) Speaking of stealing a movie. Jerry O'Connell's performance as sleaze merchant Derrick Jones in Alex Aja's Piranha remake is, in many ways, the culmination of the actor's whole career -- O'Connell answers all of his critics by playing intensely exaggerated version of the guy they had spent years making him out to be, all while letting us know he is very much in on the joke. Essentially a stand-in for Girls Gone Wild's head shithead Joe Francis (though not REALLY because lawyers), O'Connell makes Derrick Jones a coked-out maniac screaming about his dick. To be fair, it had been bitten off. In a movie overflowing with excess nudity and gore, O'Connell's performance manages to be the most extreme thing about it. He is hilarious -- he rarely gets credit for being as funny as he is -- and downright heroic in just how horribly douchey he is. Everything about Piranha 3D is fun, but O'Connell is doing some next-level shit.
Posted by Patrick Bromley at 11:58 AM