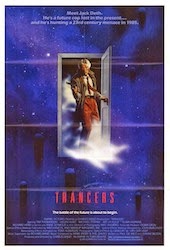 My thoughts on 1985's Trancers can be summed up in three words: Cool Fucking Movie.

Can you believe I had never seen Trancers? In addition to being a popular cult movie that's right in my It-Came-from-the-'80s wheelhouse, it's one of the most famous titles (and eventually franchises) in the Full Moon/Empire library. How did I manage to miss it for almost 30 years?

This wasn't going to be my next Full Moon Fever column. It was going to be Gingerdead Man, as I'm hoping to bounce back and forth between the "classic" titles and the newer stuff that better represents where Full Moon is at in 2014. But it's 1985 week at F This Movie! in honor of F This Movie Fest 3, and I was thrilled to find out that not only did Charles Band direct a movie in 1985, but that the movie was motherfucking Trancers. Finally, all my wrongs could be righted. Righted? Rightten. Righted.

It's the year 2247. The excellently-named Jack Deth (the great Tim Thomerson) is a police trooper in the devastated city of Los Angeles, most of which is now under water. For years he has hunted the criminal known only as Whistler, an evil sonofabitch who is creating an army of zombie-like sleeper agents called "Trancers" through hypnotic suggestion -- when triggered, they turn into rage-filled monsters bent on killing. Whistler is eventually captured, but escapes by sending his consciousness back to 1985, inhabiting the body of a cop in that year and systematically wiping out the ancestors of The Council, thereby ensuring that they never exist. Deth is sent back to stop him, taking over the body of his ancestor, a journalist named Phil Dethton, who has just awoken from a one-night stand with punk chick Leena (Helen Hunt). Now, Jack/Phil has to convince Leena that he's really a cop from the future, stop Whistler from killing a former ballplayer-turned-bum and avoid any more of those pesky Trancers.

There are a lot of aspects of Trancers that feel derivative at first. The title sounds like Scanners and the premise -- future cop needs to hunt down a bunch of things passing as human -- might sounds a bit like Blade Runner, an influence that's also evident in the movie's neon-soaked future-noir production design and even Jack Deth's tan trenchcoat. The movie may also borrow elements of The Terminator in its time travel games -- that the way to wipe someone out is to go back and time and kill his or her parents, an ingenious premise played out by James Cameron just one year prior. But unlike last week's Full Moon Fever movie Oblivion, this one is more than just pastiche. Trancers is its own cool thing: a small genre movie that wants to be big, introducing underwater cities and future tech and spanning multiple centuries (though in the interest of budget, most of it takes place in present-day 1985). Whereas some of the newer Full Moon titles are much smaller in scope -- small monsters, single locations, static photography designed to be viewed at home -- Charles Band's productions of the '80s and '90s felt like real movies, meant to be seen on big screens, even when they weren't. 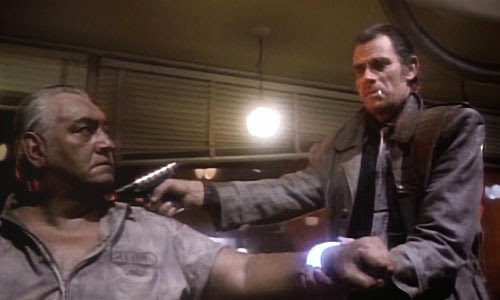 What many of the low-budget genre films from the '80s and early '90s have going for them -- the Empire and Full Moon catalogs chief among them -- is Invention by Necessity. Without unlimited funds to throw at the screen or fix problems, filmmakers like Band had to come up with clever ways to suggest big, expensive moments on a budget and attempt to hide the seams. As someone who's a fan of these kinds of movies, I'd much rather have a bunch of matte paintings and forced perspective model work than even the most convincing CGI. When funds and resources are unlimited, effects shots become white noise. But with a shot like the one of L.A. underwater at the beginning of Trancers, I'm immediately thinking about the work that went into making the models, the way that Band chose to frame the shot to show just enough within the budgetary limitations, the way the light is hitting a real, tangible object -- all that stuff. You might think that sounds like I'm taken out of the movie. Just the opposite. Instead of a bunch of pixels simply washing over my eyeballs, I become an active participant in what I'm watching. It doesn't just entertain me. It engages me.

For a movie called Trancers, there aren't very many Trancers in Trancers (it was also released as Future Cop, a title that's more accurate but also way too on-the-nose). Jack Deth really only encounters two and a half Trancers in the movie. That's not a lot of Trancers! At least one of them is a Santa Trancer. Trancers makes up for the absence of Trancers by always being cool and fun, but it was something of a surprise to see a movie I assumed to be about a guy hunting Trancers only to find out there is very little Death-on-Trancer action. I'm guessing there's more in the sequels; by my count, there are five more Trancers movies after this (though the sixth one has little to do with Band, I think, and Tim Thomerson appears mostly in stock footage from the previous films). I'm curious to see how subsequent movies answer the question of how more Trancers are created, since it's established here that they are specific to Whistler's hypnotic powers. I'm actually looking forward to finding that out. 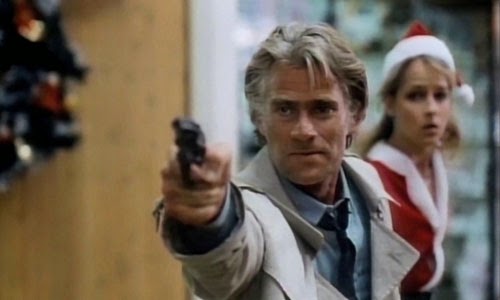 The coolest thing about the movie -- aside from the hard-boiled leading man turn from Tim Thomerson (who, between this and the Dollman series, has two successful franchises with Full Moon) -- is the way that it depicts time travel. We've seen so many movies in which characters strap into chairs or walk through tunnels of light that it's cool not just to see time travel visualized a different way, but newly conceptualized, too. The idea that a character can go under sedation in 2247 and wake up in the past -- using the body of his or her ancestor -- is really neat, even if the whole "ancestor" angle isn't explored very deeply. And I don't want to suggest that Hollywood goes out of its way to rip off Charles Band, but after last week seeing the cowboys-and-aliens mashup of Oblivion turned into the less-fun Cowboys & Aliens and now seeing Trancers, in which people lay down in beds hooked up to IV lines as their bodies lie still and their consciousnesses are transported somewhere else reminds me a LOT of some very similar images from Inception. Did Christopher Nolan really steal from Trancers? Probably not, but let's give credit to Charles Band for having multi-million dollar ideas years before Hollywood ever catches up.

Trancers is a cool fucking movie. It has a cool character in Jack Deth (even his name is cool). It has a cool concept. It looks cool; Band put a lot of thought into the film's visual aesthetic, from Deth's noir cool to Leena's punk rock cool to the vintage car to the neon lights at night. It's not a classic in the traditional sense, because Band doesn't make "classics." He makes cool fucking movies. Those are the ones that make an impression on us genre fans. The ones we keep coming back to year after year. In that way, a cool fucking movie like Trancers actually does become a classic.

Buy Trancers on Blu-ray or DVD through the links below and support F This Movie!