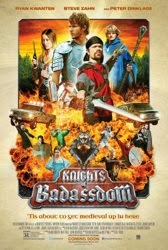 I promised myself I wasn't going to see it. I should have kept my promise.

I've written about Knights of Badassdom and its former director Joe Lynch a lot on this site. I've made my feelings very clear that I support the original director and that the people who fucked him over and sloppily edited the released version of Knights are shitty assholes who are shitheads. I had every intention of boycotting the movie, as it was finished without Lynch's participation by people who treated him like garbage. In fact, I said as much the last time I wrote about the movie. But then a member of our wonderful community (I believe it was Brad L., you Aussie MFer) kind of called me on this position and asked "But what if it's really good?" Shit.

See, I had already made my mind up that this version of Knights of Badassdom would be terrible and that Lynch's version was a masterpiece we would never get to see. But Brad was right -- I needed to see it for myself before I formed an opinion. If I'm going to get on people who freak out about every casting announcement that they should maybe wait and see the movie, shouldn't the same apply to me in this situation? The idea of supporting the Asshole Cut really, really bothers me, but I'd be a hypocrite to continue shitting on a movie that I haven't seen. I could shit on the behavior of the assholes who caused the situation in the first place, but not the movie itself.

So I sucked it up. All apologies to Joe Lynch, but I paid my $5 to see the Asshole Cut of Knights of Badassdom. And now that I've seen it, I can honestly say that I was right all along. They fucked this movie up in a big, big way. 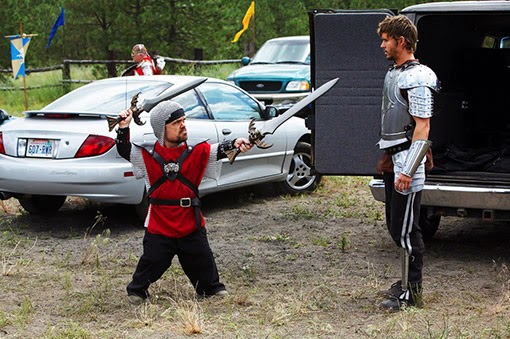 Ryan Kwanten plays Joe, a blue collar singer and guitar player in a metal band whose girlfriend (Margarita Levieva) dumps him for going nowhere. Heartbroken and depressed, he retreats to his crash pad -- the mansion of his best friend Eric (Steve Zahn), a millionaire with a passion for Live Action Role Playing -- LARP for short. Eric and their stoner buddy Hung (Peter Dinklage) drag Joe to a huge LARP battle in the hopes of snapping him out his funk, which becomes even more likely when they meet foxy Gwen, a female LARPer who looks especially good wielding a broadsword. While attempting to perform a spell during the game, Eric accidentally raises a succubus who takes the form of Joe's ex and proceeds to go on a murderous rampage. And that's when shit gets real.

Knights of Badassdom is a mess, unfinished and slapped together to avoid legal action or financial ruin by some shady characters. It doesn't feel like something made by a filmmaker, but rather like someone who found a bunch of raw footage and tried assembling it into something. Despite heartbreak, action, monsters and violent death, everything feels pitched at the same level -- the movie has no idea how to create moments. It lacks any kind of narrative build, and all of its biggest and best beats are ruined by bad editing. Major deaths are rendered incomprehensible, chopped up, obscured by darkness and given no impact because it feels each time like all the wrong shots were chosen in building the sequence (I'm confident enough in Lynch to believe that he either got the right footage and it wasn't used or would have gone back and done reshoots for the inserts on the gore gags -- having seen his first movie, Wrong Turn 2, it's clear that he knows exactly how to stage splatstick). An effects-heavy finale that should be a total showstopper feels rushed and confused. In fact, the last 20 minutes of the movie are a disaster, and that's even before we arrive at all the strobey post-production slow motion or the American Graffiti-style text cards explaining what happens to each of the characters. This was clearly a desperate solution to no one knowing how to end the film. It's a shitty solution.

There's a terrific movie somewhere inside Knights, but it's one we're never going to see. At least two of the performances are great; while several might have been very good but didn't survive the edits, both Peter Dinklage and always-funny Jimmi Simpson manage to be really funny in every scene. Lynch has a good eye, so many of the shots are beautifully composed -- the film would look great if any of the editors-for-hire would have actually held on anything long enough for us to see it. More than anything, though, is that there's a lot of Joe Lynch that remains in the movie's DNA. It's in the genuine love for fantasy the characters share, or Bear McCreary's metal score, or the mix of comedy and gory horror. Lynch doesn't want to make fun of these characters. He loves these characters. He is these characters. 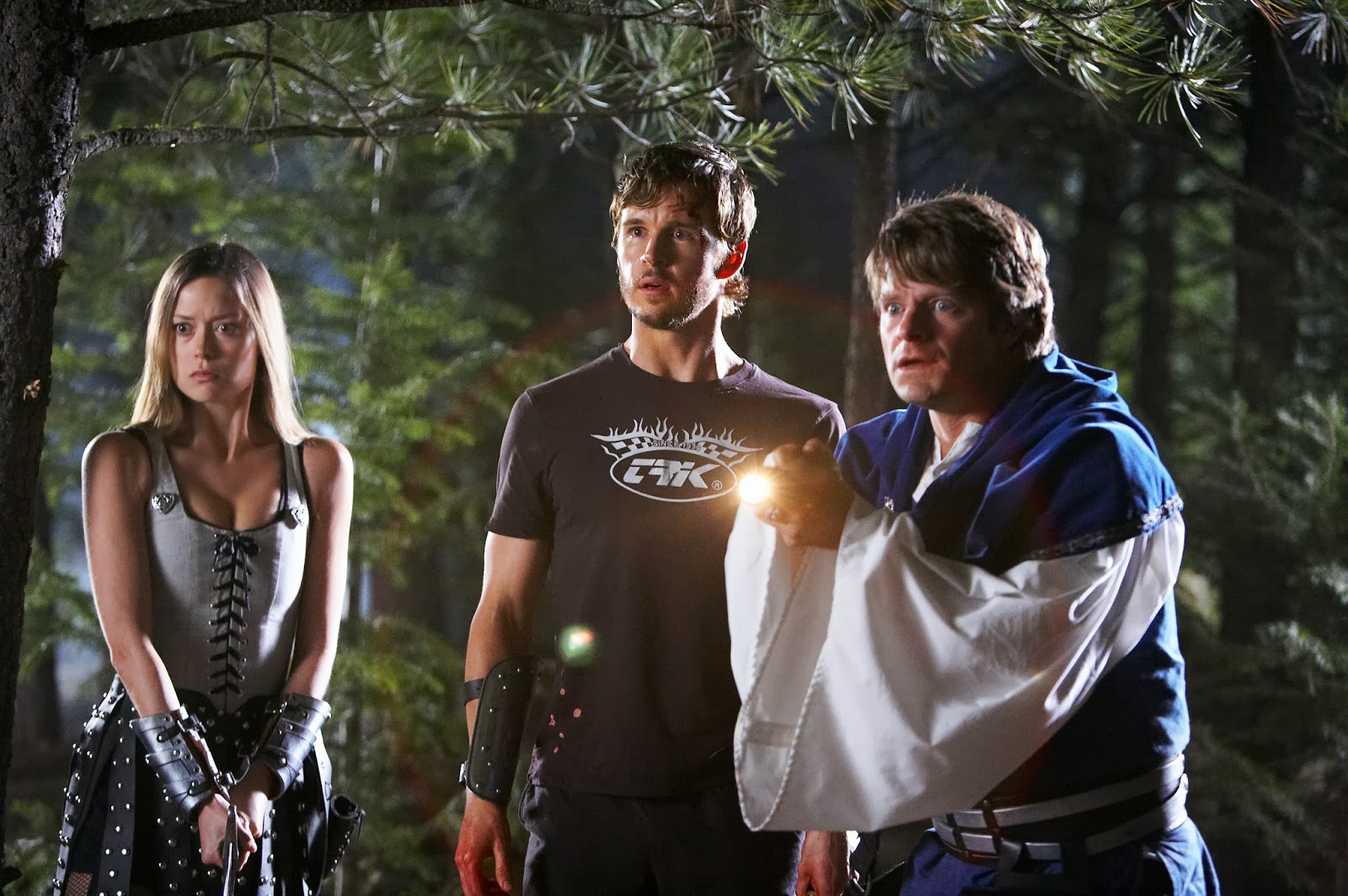 Unfortunately, the producer's Asshole Cut doesn't trust the viewer, and it certainly doesn't trust the geeky audience to whom the movie would most appeal. This means there are "jokes" laid over the jokes in the form of obtrusive voiceover (an unseen announcer offers commentary from time to time and it either makes him sound like a stooge or makes some stupid anachronistic reference meant to clash with the medieval speak the characters practice) or lame red text appearing on screen. Usually, it just tells us where we are -- or, rather, what mythical realm the characters have made up, because isn't it all so silly? In only one instance the red numbers keeps score, flashing numbers ("+1," "+2") as characters pretend to sword fight. It adds nothing and calls attention to itself, an attempt to score points with the role playing crowd that comes off as condescending and a little superior. Had it been employed consistently throughout the movie, I could defend it as a way of clarifying the rules of LARPing. Instead, it's there as a bit of business because the hired hacks who assembled this cut needed something to fill out a moment. They don't trust their audience.

Knights of Badassdom is a perfect illustration of the difference between knowing the words but not the music. There was a script. There are performances. A movie was shot. But knowing how to put it together the right way requires knowing the music, and this version of the film is tone deaf. A good movie could have been made from the raw materials here -- it's a movie that shines through from time to time, whether it's when Peter Dinklage is on screen (most definitely during a late-movie metal number) or just in the enthusiasm of the actors -- but it's been jumbled and confused and rushed into a mess. It has an overall structure -- A leads to B leads to C -- but the individual scenes and moments feel shapeless. 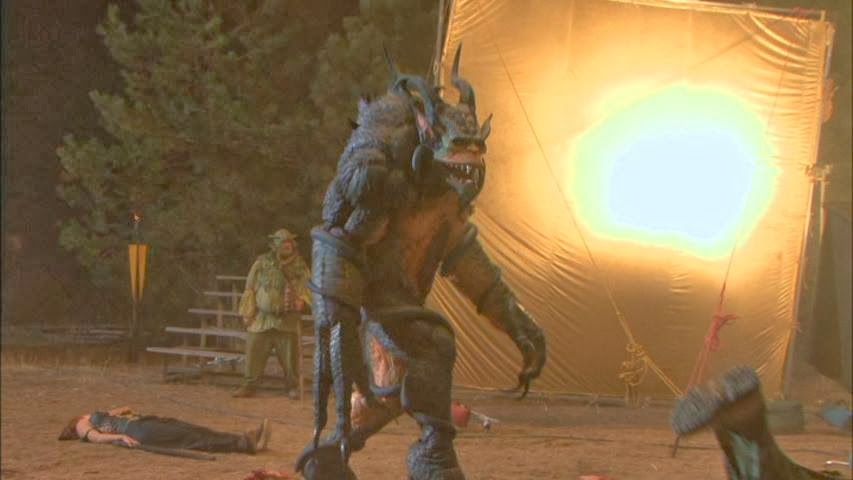 I swear I did not go into Knights of Badassdom with my mind made up. Yes, I had a bias against it and, yes, the movie was fighting an uphill battle as far as I was concerned, but I would be totally willing to admit if it somehow worked. It does not. It never really stood a chance.Though it was once made with the best of intentions, those intentions went out the window once the film was taken away from Lynch. The goal of Knights of Badassdom was no longer art. It was avoiding a lawsuit or paying taxes or some bullshit self-interest. It's impossible to create art that way.

Maybe I would have been better off with the version of Knights that existed in my head these last three years. I was content to stick with that, but Brad L.'s comments kept ringing in my head: "What if it's good?" Though I disagree with most of the post-production conduct of which I am aware, I needed to see the movie in order to fairly share an opinion about it. But now I have seen it, and I can tell you that you should not. Don't waste your time. Don't support these kinds of practices. Don't bother seeing a movie that doesn't give a shit whether or not you like it. All this cut of Knights cares about is existing so that its producers cannot be accused of ripping off investors.

Fuck you, wrong cut of Knights of Badassdom. You've broken my heart for the last time.
Posted by Patrick Bromley at 7:40 AM