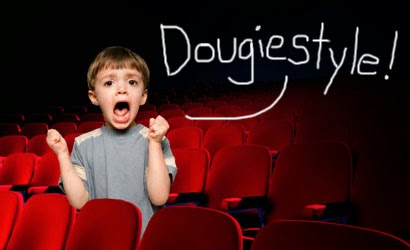 This will be my last column for a little bit. Don't worry -- I'm not going away (fun fact: no one is worried). I'll be back [with a vengeance] in about a month. It's just ... I really need a break from all you INSANELY POSITIVE PEOPLE. Jay-kay. Truth is, I'm moving! To Los Angeles. With my wife. And kid. Like a boss. And I've got Snoop Lion (née Dogg) on my mind. Yeah roll up the dank, and pour the drank. And watch your step (why?) 'cause Dougie's on the gank. #CaliforniaDreaming

Where to begin? OK, so ... I knew NOTHING about this movie going in, and (truth be told) I was expecting some very self-serious stuff (for no apparent reason, other than the title). Like, end-of-Avengers-level nerdgasm (I still don't know who "Thanos" is, nor do I care!), which, to the comic book layman (i.e., ME), is borderline insufferable. Instead I got something reminiscent of ... The Hitchhiker's Guide to the Galaxy? I can't say that I'm SUPER excited to see it -- I mean, that is a really weird trailer, right? -- but I will admit that my curiosity is piqued. And that's what they want right? PIQUED-NESS? Director James Gunn is great (big ups to a Troma alum [although I wasn't the biggest fan of Super]), and Chris Pratt plays the perfect bumbling everyman who you just KNOW is awesome and smart and heroic. The CGI still looks like shit, and I can't quite reconcile "Hooked on a Feeling," but whatever. This will either make a BILLION dollars, or bomb. Either/or.

This looks great. Based on a novella by Fyodor Dostoyevsky, it's about a man who goes mad after finding out his life has been usurped by a doppelgänger. A doppelgänger, people! And the right kind of project for Jesse Eisenberg. I mean, I totally buy him as a weird, petty little man. Don't get me wrong -- he might be the best thing about Untitled Superman-Batman Project (and expectations aren't exactly sky-high), but Lex Luthor? That's about as believable as him playing a MASTER magician. Granted, this UK trailer is very odd and intriguing; perhaps the American preview would have left me a little more cold (I dunno). Finally, hello Chris O'Dowd! Hi! Over here!

JESUS I WANT TO SEE THE MOVIE THESE PEOPLE ARE TALKING ABOUT.

Welp, we're four for four so far with AWESOME-LOOKING TRAILERS. I think Hollywood got my memo about giving away the whole story. YOU'RE WELCOME. Because what we're left with are absorbing, exciting character studies with riveting music, excellent editing and AMBIGUITY (which, in this case, is a good thing). And all that praise at the end isn't from a bunch of fringe blogs -- everyone (erudite and fanboy alike) is losing their heads over this chamber thriller. Including Gay Times.

Objectively? This movie looks goofy and dumb but also kind of awesome and fun. Subjectively? I'm totally bummed. Paul Walker was really finding his rhythm, and now he's gone. No need to memorialize him here, when Patrick wrote this really great piece a few months ago. I'm just finding it hard to divorce the fantasy of this over-the-top film from the sad reality of his untimely passing. No amount of parkour can bring him back.

Anyone else waiting for a cell phone to go off halfway through this trailer? "Please, don't spoil the movie by adding your own soundtrack." #dodougsjobforhim
Posted by Patrick Bromley at 11:46 AM