Drunk on Foolish Pleasures: Ten Things That Made Me Deliriously Happy About the New Muppet Movie

You want a unicorn? I’ll give it to you.

Critics have been, to put it kindly, mixed in their reactions to the new Muppet project, Muppets Most Wanted. One of my favorite critics, Dana Stevens from Slate, writes, "there’s something sour and strained about this movie that’s at odds with the usual Muppet ethos of game, let’s-put-on-a-show cheer. Maybe that’s because of the inordinate amount of screen time spent on the rivalry between two villains who are as uninteresting as they are unpleasant.” This is a shame because, in my opinion, this film is one hell of a lot of fun, and “evil Kermit” Constantine is a hoot and a half. I liked it better than the Muppet movie from 2011!

NOTE: Nothing is better than The Muppet Movie from 1979.

WARNING: This is not a review of the movie; you’ll be treated to a real review later in the week from Patrick, the Kermit to my Constantine. I just wanted to explore a few things about the movie that I liked, taken in context of the Muppets’ film oeuvre (and I challenge you to find ANY film website that can use a phrase like “Muppets’ film oeuvre” with less irony.) If you want to see the film, do it BEFORE you read this column. To say that it contains MAJOR SPOILERS is putting it kindly. 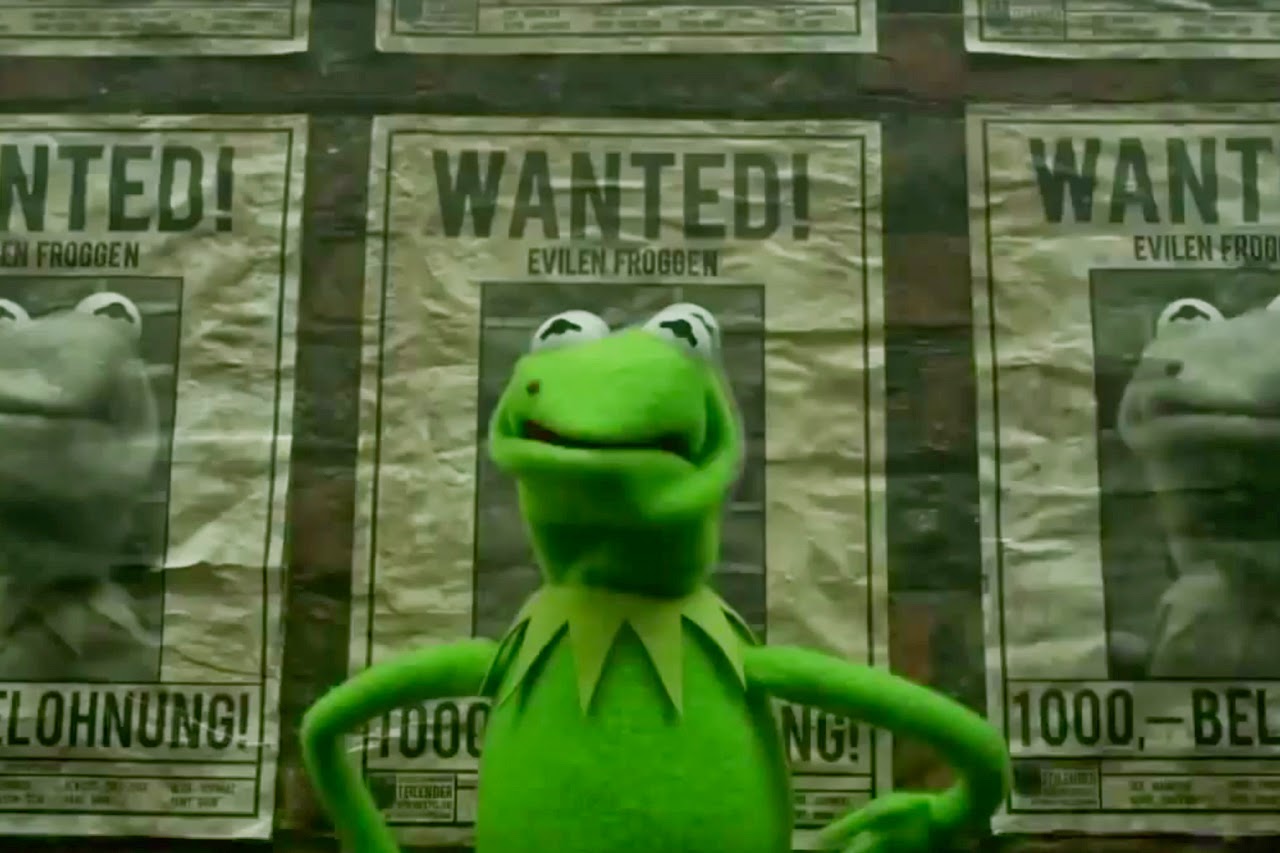 I had so much fun this past weekend seeing Muppets Most Wanted that I was disappointed (but not at all surprised) when I read about its low box-office total: 16 million dollars, about half of what 2011’s The Muppets took in on its opening weekend. I am getting used to this. When it comes to children’s films, if I love it, it tanks. Witness the recent ParaNorman.

What’s that? Give you ten reasons I had fun seeing Muppets Most Wanted? I thought (feared) you’d never ask:

1. The film is really funny. Obviously, humor is very subjective, but for me this film ties The Lego Movie for the funniest so far this year. Either this says something about the dire state of American movie comedy in 2014 or, when it comes to things to laugh at, I am still ten years old.

2. Big stars in little cameos have always been hallmarks of Muppet adventures, and The Muppets Most Wanted might just set a record for the sheer number of these things at 24. I am sure that I missed some of them (apparently, one of the flower delivery boys is somebody famous on the Disney channel.) I had to smile when one of the ushers in a wedding scene is deemed a terrible usher, and the little girl sitting down the row from me exclaimed with glee, “but that IS Usher!”

3. I have reconciled myself to the fact that most Americans judge a film on a single criterion: to what extent the film in question is “realistic” enough for the audience to mistake it for actual reality. Because of this, we are now only allowed movie musicals that feature puppets or cartoons. Most people know that puppets and cartoons are not real to begin with, so they can suspend their disbelief to sit through the musical numbers. (I said MOST.)  From the original Muppet movie’s terrific Paul Williams to Flight of the Conchords’ Bret McKenzie, who did original songs for both the 2011 and 2014 movies, the Muppets tend to choose talent that actually seems to “get” the whole… Muppet thing. The songs in MMW are inventive and catchy.

4. MMW contains some nice messages for the kiddies, but in true Muppet style refrains from beating them over the head. Friends are important. Family is important. My favorite, though, is how the film makes the subtle point that we should always be suspicious of someone who will “give us anything we want.” The evil frog lets the Muppets do anything they want, and it spoils their show. Later, some prison inmates want the same thing and only Kermit has the sense to draw the line. The film seems to be saying that constantly getting everything a person wants turns that person into a sociopath.

5. The film travels all over the world, using movie magic to show us London, Madrid, Siberia, Dublin, and Hollywood. It is like taking a mini-vacation without leaving the theater. 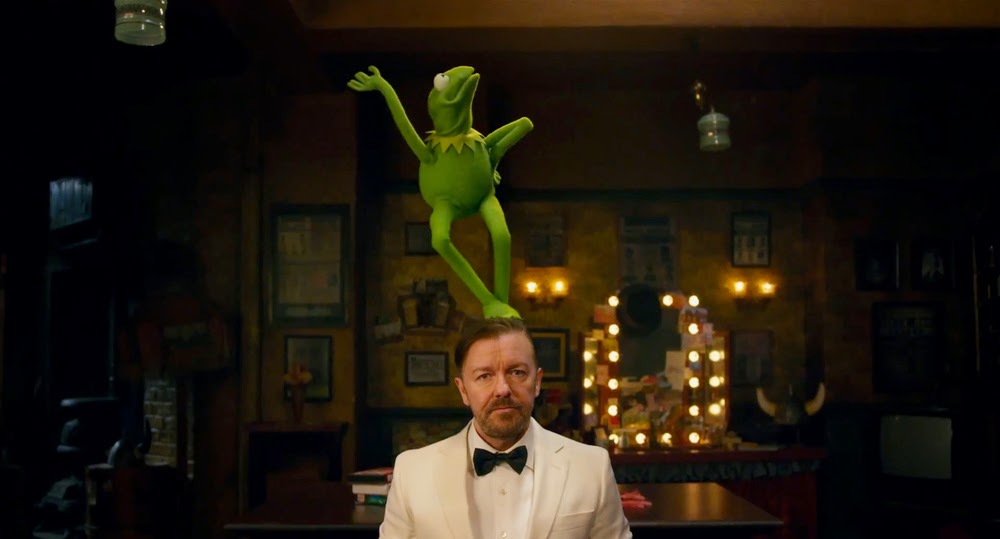 6. I like when the evil frog, Constantine, dances on Ricky Gervais’s head and messes up his hair. Kermit would never do that. 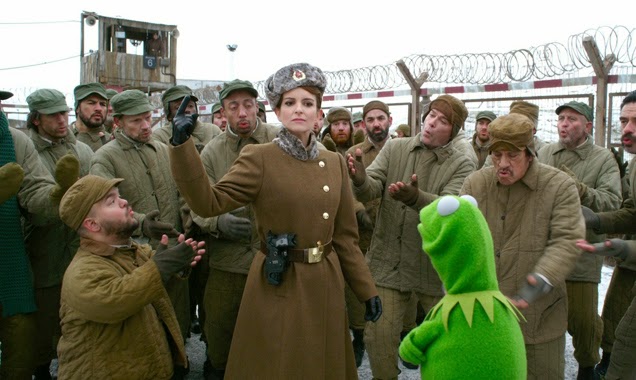 7. I think Tina Fey (like Brad Pitt) should play to her strengths and take more character parts in crazy comedies that work, as opposed to lead parts in romantic comedies that fizzle.

8. MMW comes with a delightful Disney short (remember that Frozen was proceeded by the delightful Get A Horse) featuring the Monsters, Inc. gang! 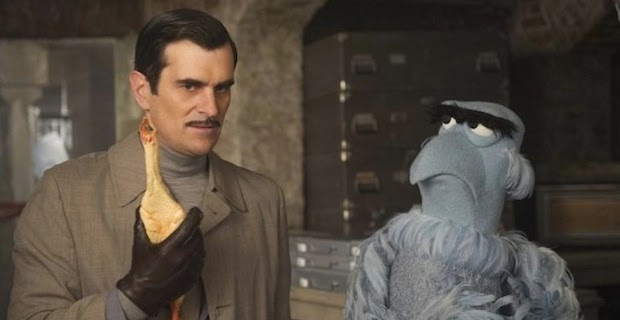 9. I think fake French accents are a hoot (I’m looking at you, Ty Burrell.)

10. Another Muppet movie hallmark? Too many jokes to catch in one sitting. For instance, I noticed that in MMW’s wedding scene, the Swedish Chef is wearing a black chef’s hat, of course, because one does not wear white to a wedding.

There is a trend in the kids’ movies I’ve seen over the past few years, and I think it’s worth talking about (if it were a Glossary entry, I might call it “the tuna net.”) Instead of fishing for one audience, some movies cast a net so wide—encompassing everything from fart jokes to political satire— the filmmakers are clearly hoping to catch parents, little kids, and anyone in between. I’m sometimes confused about just whom the film was made for. One of things in MMW that made me laugh the loudest was an Ingmar Bergman reference. INGMAR BERGMAN. What seven-year-old on earth is going to get that?

In the very cool Sesame Street-behind-the-scenes book Street Gang, the show’s producers talk about their reason for booking guest appearances by celebrities not well known to children—it’s the “is that who I think it is?!” factor designed to draw parents into the room to watch with the kids. Certainly that’s a factor with kids’ movies today too; the references and cameos are to keep parents from checking out, checking phones, or just plain falling asleep (as I did during 1998’s less-than-compelling Pokemon movie.) Pixar’s good at it and was one of the first outfits to do it consistently, but even the original Muppet movie used parent-friendly cameos to add to the fun (the withering disdain of Steve Martin’s lederhosen-clad waiter still cracks me up.)

But where is that line? There were times during MMW when I felt that perhaps the Muppet Organization may have erred on the side of adulthood by including too many jokes that will sail over children’s heads and a PG rating that might keep very small children from attending. As I said, I loved LAIKA’s 2012 ParaNorman, but our own Patrick Bromley made a good point when he said it was really a film for no one—too scary for kiddies, but too much like a kids’ movie to attract any adults. Maybe it was a movie made for a very select audience of just me. BECAUSE I DESERVE MY OWN MOVIES!

I’m looking forward to getting PB’s take on MMW, to see if he feels that it dwells in that same grey area. Until then, I leave you with this: like the Oscar-nominated “Man or Muppet” from the 2011 film, Muppets Most Wanted contains one of the catchiest songs that I have heard in a long time. Watch it below and JUST TRY to get it out of your head!

Posted by Patrick Bromley at 11:54 AM