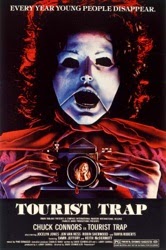 If you have ever been creeped out by a mannequin, this is the movie for you.

This week's Full Moon Fever selection was suggested by @LovelyZena.

Is there a difference between a movie that is good and one that is effective? And doesn't a film that's really effective just become good?

That describes 1979's Tourist Trap, a movie that feels cheap and crudely made but is so effectively creepy that it's good by default. A horror movie that looks very '70s but contains a lot of '80s weirdness, Tourist Trap comes from Charles Band's early days. It predates Full Moon Features. It even predates Empire International Pictures. It was released under the Charles Band Productions label, and while it's much more of a straightforward horror film than many of the titles eventually released under Band's labels, it certainly hints at his future fascination with puppets and dolls come to life. The difference here is that the dolls are life-size.

A group of friends is driving through the desert. When one of their cars breaks down, they are forced to make a pit stop; one goes to a gas station to get a replacement tire while the others check out a vacant property. There they meet Slausen (Chuck Conners), the proprietor of a wax museum that was once a tourist destination but has since fallen off after the highway was moved away. He offers to help repair the car and insists that the group remain in the wax museum, where they begin to be killed off by mannequins. Slausen blames the murders on his brother, but it quickly becomes clear that there's something else going on...

The power of Tourist Trap is that it's played straight despite the constant use of what JB wrote about last week as "magical realism." The movie looks and feels a lot like The Texas Chain Saw Massacre in that it focuses on a group of young people taking a trip, breaking down and getting stranded at some obscure, out-of-the-way house cluttered with stuff (the same art director, Robert Burns, is responsible for both movies). It is the prototypical Bad Place. But in addition to the believable, claustrophobic, house-that-time-forgot atmosphere -- which in and of itself would be kind of scary -- there are a bunch of mannequins that come to life. No explanation is offered as to why this happens. There is no stupid scene where we see the villain putting a spell on them or any ancient curse at work. People are turned into mannequins. Mannequins come to life. That's just show shit works in Tourist Trap. And it's fucking terrifying. 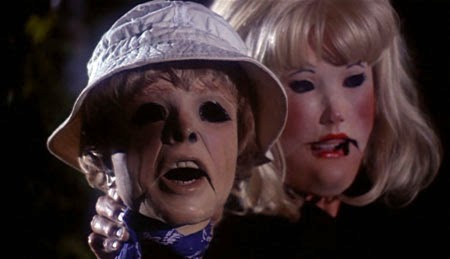 It won't be terrifying to everyone. We are all scared by different things. Some people don't dig on snakes. Some people find zombies scary, despite the fact that they are so prevalent now that you can practically find them on cereal boxes. I tend to find (some) puppets and mannequins scary, because they exist in that uncanny valley between what is human and what is plastic. I'm freaked out by that episode of The Twilight Zone where the woman is trapped with all the mannequins, and we don't even see those things move. Add to that the way the mannequin faces in Tourist Trap sometimes speak (mostly to just utter "SHE'S SO PRETTYYYYYY") and it's the stuff of nightmares.

The crudity and and the low-fi aesthetic end up making the movie even scarier. There is something that feels "safe" about slickly-produced horror; it is made with a lot of money and resources, and with that come business interests that must be protected. We know they're not going to go too far or really shake us up and. The status quo will ultimately be maintained. But independent and "fringe" horror isn't beholden to any bottom line or any crowd-pleasing sensibilities. Despite its PG rating, a movie like Tourist Trap is scary because we don't know what the filmmakers are capable of. It's rough, but its roughness works in its favor. It's not playing by any rules we know. And it feels like it was made by crazy people. 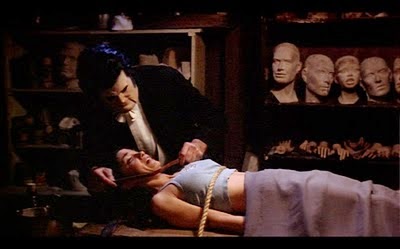 I'll sometimes judge a horror movie against a strange criteria: how would this movie affect me if I fell asleep with the TV on, woke up at 3 a.m. and saw any scene playing? By that measure, Tourist Trap has to be one of the scariest movies ever made. Waking up to almost any scene in the movie out of context wouldn't just guarantee I not fall back asleep -- it would fuck me up for the next week. I once woke up and caught a few seconds of a killer Pinocchio movie (I know it wasn't Pinocchio's Revenge because I didn't see the puppet boy unplug anyone's life support) and it still fucks me up when I remember it. Being caught in that state, not sure if you're really seeing something or dreaming it, wishing you could wake up just to make it stop -- almost all of Tourist Trap feels like that.

Like Texas Chain Saw, the movie is about people who live on the fringes -- failed capitalists abandoned by "progress" who begin using humans to create their product. There's a scary idea in there whether it's 1979 or today, when the disenfranchised 99% could choose to rise up and begin turning their neighbors into mannequins or chili (or mannequin chili, which actually isn't that bad if you pluck the mannequins first). Tourist Trap isn't really interested in scaring us with ideas, though. It's more about being unsettling in the moment, mixing visuals that don't quite compute (the faces are human enough, but missing eyes...and the mouths don't move properly...) with story beats that defy the reality that we know. Pino Donaggio's score goes a long way towards making the movie so supremely creepy, too. It starts as a catchy, whimsical little funhouse melody before segueing into string-heavy nightmare music. It's a fantastic score.

And it stays with you. A lot of Tourist Trap does, really. The story is thin and mostly forgettable. The performances of the teenage victims (among them a young Tanya Roberts of The Beastmaster) are, for the most part, generic. Even Chuck Conners, who gives what comes closest to a memorable performance in the movie, isn't what will remain in your head in the days after seeing it. No, it's an image here, a scare there, the sound design, Donaggio's score. Too often there is a temptation to call movies without a strong narrative structure "dreamlike" -- it's the word we assign to explain a story that floats from memorable beat to memorable beat while ignoring the lack of connective tissue. It's a habit I'm trying to break, but only after I suggest that Tourist Trap feels dreamlike. 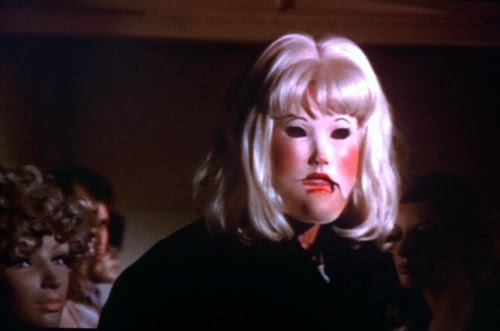 Writer/director David Schmoeller would work again for Band as the director and writer of both Crawlspace (released by Empire Pictures) and Puppet Master, the first movie made at Full Moon Features. These three movies all share a common theme of men with strange, scary obsessions that lead to deadly consequences for those unlucky enough to cross their paths. All three work, but in different ways. Puppet Master is the most accomplished, while Crawlspace lives and dies by a typically nutty Klaus Kinski performance. But Tourist Trap is the creepiest of the three films, getting a ton of mileage out of what seems like such a simple idea. On paper, a "killer mannequin" movie seems obvious and gimmicky. In Schmoeller's hands, it's nightmare art.

Buy Tourist Trap on Blu-ray or DVD through the links below and support F This Movie!

Posted by Patrick Bromley at 7:38 AM