It Came from the '80s: The Beastmaster 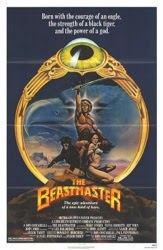 If you grew up in the '80s and had cable, you've seen The Beastmaster. Like, a lot of times.

No "It Came From the '80s" movie is more synonymous with the decade than Don Coscarelli's 1982 fantasy movie The Beastmaster. So prevalent was the film during the 1980s that the running joke (usually credited to Dennis Miller) was that HBO stood for "Hey, Beastmaster's On." It's a movie I saw SO MANY times growing up. When I put it on to rewatch for the purposes of this column, I was surprised both by how much of it felt totally new to me and how much of it was stuck in my brain forever. There's a reason for both.

Marc Singer plays Dar, a warrior with the ability to telepathically communicate with animals. His parents were murdered when he was a baby by a sorcerer named Maax (Rip Torn wearing a beak-like nose prosthetic). Dar is raised like a son by a poor villager who one day is murdered along with the rest of Dar's village by Maax and his barbarian slaves called the Jun. He eventually encounters a slave girl (Tanya Roberts), the king's son Tal (Josh Milrad) and his bodyguard Seth (John Amos) who help him on his quest to take revenge and kill Maax.

Oh! I forgot to mention his animal friends. He wouldn't be much of a Beastmaster without them. He's got a black tiger named Ruh who acts as his occasional wingman. He's got an eagle named Sharak (who probably should have been his wingman...I'M HERE ALL WEEK). He's got two twin ferrets named Podo and Kodo that help him steal stuff and sometimes kill bad guys when necessary. Not bad, ferrets. The tiger helps him fuck Tanya Roberts, but you guys are pulling your tiny weight. 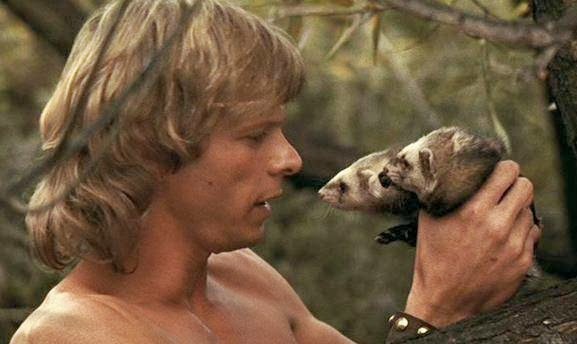 Despite having seen The Beastmaster a bunch of times as a kid, the plot of the movie is always hazy to me. Rewatching it always feels new until something familiar comes along, like a song you don't recognize until the chorus and then know EVERY WORD. It plays fair and progresses as it should -- A leads to B leads to Podo leads to Kodo -- but it's the kind of film in which parts stand out more than the whole. Maybe it's a testament to Coscarelli's skill at creating cool moments or compelling set pieces, burning a particular image into our brain with such intensity that the stuff surrounding it starts to feel like down time while we wait for the next memorable scene. Maybe it's Tanya Roberts being topless.

Or maybe it's a function of the movie's post-production tampering. What many people might not know is that The Beastmaster with which we grew up is not Coscarelli's film -- not really, anyway. The director was told to leave during editing and producers insisted the movie be made longer. Forget that such a note is the opposite of what most editors are told to do; the problem with this particular bit of direction is that it was so non-specific. It wasn't "Make the movie longer by adding in these scenes that we previously cut." The editors were asked to just lengthen every shot. Once you are aware of that, it's impossible not to notice how padded and draggy the movie is. Coscarelli set out to make a fun pulp adventure movie, but the "extra" footage gives it the bloat of a fantasy epic. Had the film been allowed to move the way it was intended, The Beastmaster would be a legitimate classic of the genre. Instead, it's one by default -- designated classic status through sheer repetition on cable. 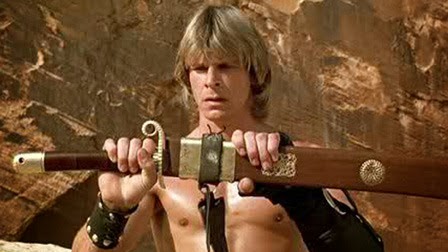 The Beastmaster is one of those '80s genre movies with a rating (in this case PG) that meant it could be shown all day on cable even if it might be a little intense for kids. I might make the case that kids have no business seeing it, but when I compare it to something contemporary like Transformers -- a genre movie aimed at adults but which obviously appeals to kids -- I so appreciate the violence and intensity of The Beastmaster. A kid watching Transformers is only going to be exposed to racism, misogyny and bloodless video game violence. It's destruction with no consequence. It seems like it's ok because the violence is constant but completely casual. The stuff that's disturbing in The Beastmaster might cause deeper psychic scars, but they're the kind we actually want to process. It's not the white noise violence of a Transformers; it's a well-aimed missile. The scary moments in The Beastmaster (and there are lots of them) are scary in ways that activate our imaginations. Coscarelli knows and loves horror, and he weaves it into the fabric of his film in a way that few other fantasy movies do: 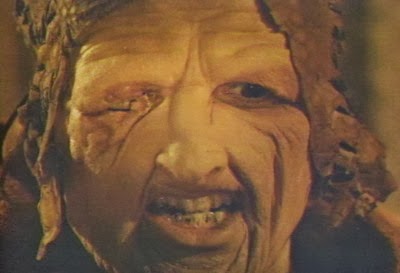 There is a pregnant woman whose baby is teleported out of her womb before she dies and into the belly of a cow. This happens in real time on camera. This also explains how Dar -- the baby born of magic cow -- is able to talk to animals. I think.

There is Tanya Roberts toplessness. This is less scary than it is THE BEST but it's worth pointing out on a list of things that were inappropriate for seven year old me to see over and over. 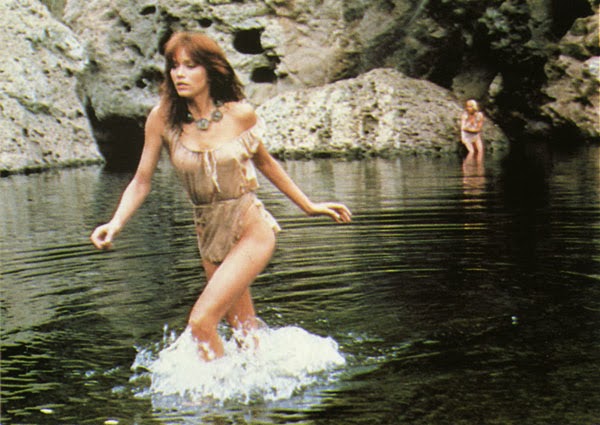 There are scary barbarians in leather masks who start as normal men who have blue goo poured on them (while they scream in pain) and then turn into zombie-like warriors. 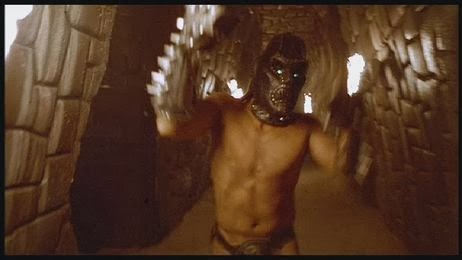 There is a ring with a moving, working eyeball in it. 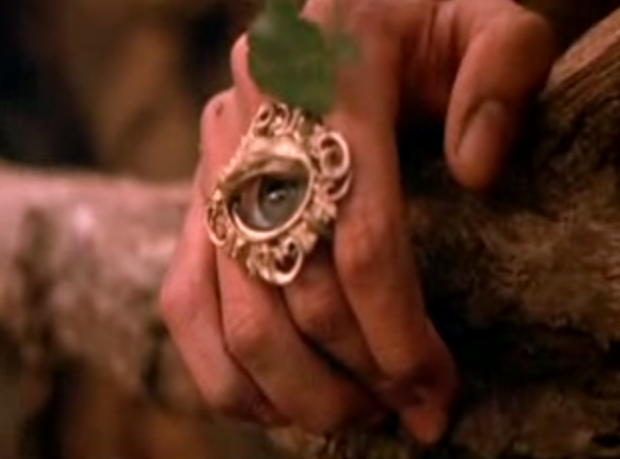 There are children who are ritually sacrificed and murdered on camera, I assume for sassing. 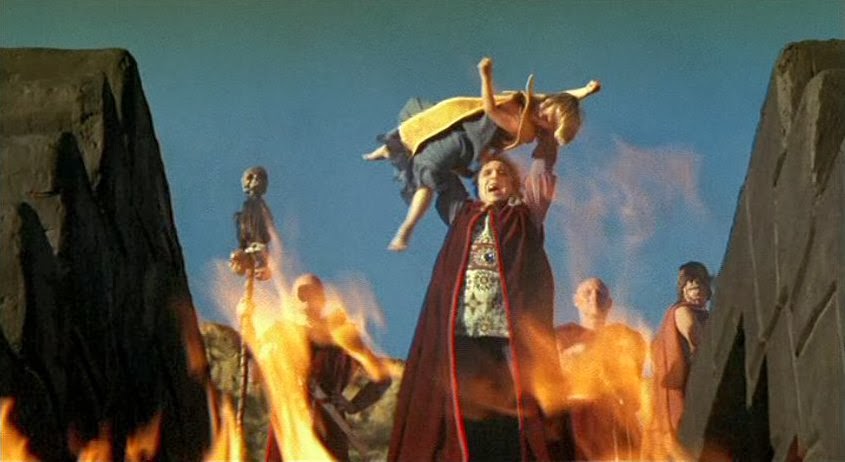 But of course the scariest thing in the movie -- the one that sticks with us from childhood (in the company of the foot being eaten in Dragonslayer, Klytus' eyeballs popping out in Flash Gordon and Annie Ross' robot transformation in Superman III) -- is the presence of faceless, winged monsters who envelop men and dissolve them into piles of goo and bones. 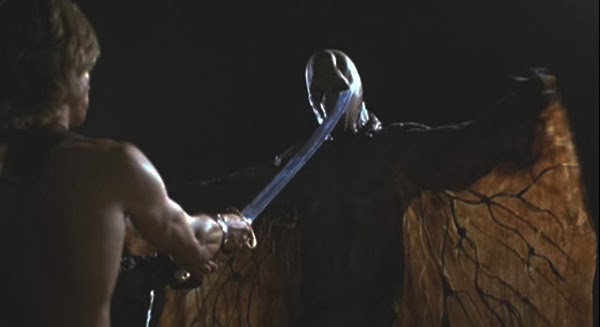 Yes, a lot of this stuff is nightmare fuel. But giving the audience nightmares means it's working, somehow tapping into our consciousness and taking up permanent space. These images are what make The Beastmaster special among the glut of '80s fantasy. The fun and the adventure, the loincloths and swordplay, the Frazetta-esque casting of Tanya Roberts and the rousing score (by Lee Holdridge) all tell us that Don Coscarelli loves the genre. The scary horror stuff tells us he means it.

Coscarelli is a guy incapable of directing an uninteresting movie. He built his career on Phantasm, a waking nightmare of a film that has a huge cult following; I've never loved it (or the franchise) as much as some other horror movies, but I'll be the first to admit that it's super interesting and that Coscarelli directs the shit out of it. He does the same on The Beastmaster, incorporating much of Phantasm's horrifying weirdness into a sword 'n sandal movie. Though the vast desert landscapes would seem to cry out for anamorphic scope photography, Coscarelli and his DP John Alcott shot the movie flat (minus a few of the scenes with Billy Jacoby which were shot in 2.35 and then 'stretched' in post-production to match the rest of the film). Though it might not have been their first choice, it's another contributor to the movie's many weird qualities -- Coscarelli keeps things tight and waves the camera at times (more towards the end) so that many sequences recall early Sam Raimi. I mean that as a compliment.

It's more than just the editing and photography in which Coscarelli's hands were tied. Rumor has it he didn't always get his first choice of cast, either. The director originally wanted Demi Moore (then just 18) for the role of Kiri. Tanya Roberts was cast instead. I can live with it. But Coscarelli also wanted fucking lunatic Klaus Kinski for the role of the villainous Maxx and was saddled with Rip Torn instead. Torn is fine and it's amusing to watch him act like a hawk as much as possible (his idea, from which Coscarelli had to pull him back), but the missed opportunity of seeing Kinski crazy the place up is heartbreaking. Coscarelli knew what he was doing. He should have been allowed to make the movie he wanted to make.

Another story goes that Dino de Laurentis was so impressed with The Beastmaster that he approached Coscarelli to direct Conan the Destroyer, but that Coscarelli turned it down because the script was garbage. I suspect he said most of what he had to say about the fantasy genre with Beastmaster, but he also would have made Conan the Destroyer more interesting. That's assuming, of course, that he had been given autonomy. Given that he would have been working for a strong producer like de Laurentis for a major studio (Universal), there's a good chance he would have faced even more interference than he did on Beastmaster. I can't blame him for saying no. 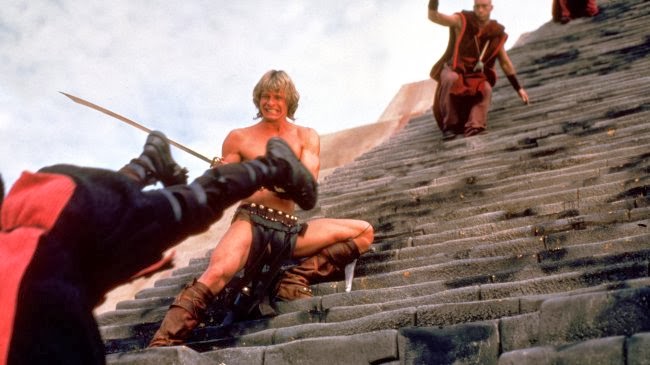 The Beastmaster is a weird -- if totally obvious -- entry into It Came from the '80s. It's got a ton of problems and ends up a big mess (through little to no fault of Coscarelli), but we all remember it as a classic. When trying to figure out what movie I should do next for this column, I put it to a vote and The Beastmaster won handily. One reader, @greyweirdo, went so far as to say "Beastmaster WAS the '80s." It's a question that arises again and again in ICFT80s: do we remember these movies so well because they are good or simply because we saw them a lot as kids? The Beastmaster finds a way around this nostalgia roadblock by not being genuinely great but by sticking in our memories with weird and powerful images. The fact that it's as cool and special as it ends up being even in its released form is a testament to what Don Coscarelli was able to pull off even while being cockblocked seemingly every step of the way. Imagine the movie we might have if he had just been left alone.