It Came from the '80s: Conan the Destroyer 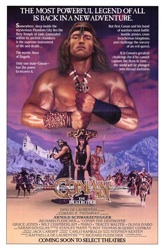 Conan the Destroyer is the Conan movie for kids. Somehow it still has fountains of blood, graphic beheadings, inappropriate sexuality and Arnold Schwarzenegger's hammiest acting this side of Mr. Freeze. Ah, the '80s.

Conan the Destroyer is not a very good movie. But because it is rated PG and showed on HBO ALL THE TIME in the mid-'80s, it is the Conan movie on which I grew up. When I finally saw John Milius' original Conan the Barbarian well into my teens, it was a revelation -- ohhh, THIS is what a Conan movie is supposed to be like. And by that I mean "not goofy and stupid."

In the interest of full disclosure, I have not read any of Robert E. Howard's original Conan stories. I am aware that many fans of the character feel that even Milius' movie does not represent him well. So while I can't speak to whether or not it is faithful to the source, I can say that Conan the Barbarian still works as a great movie -- a full-blooded epic with sweep and scope. It has real stakes and it takes the material very seriously. The movie succeeds because Milius means it (that guy always MEANS IT), resulting in one of the best fantasy films of the '80s.

Conan the Destroyer, on the other hand, seems made for Saturday afternoons. With the violence toned down so the movie could secure a PG rating (down from the first film's well-earned R) and much more of an emphasis on "comedy," the second Conan film skirts right up against camp when it isn't embracing it outright. I would theorize that director Richard Fleischer was embarrassed by the material and tried to distance himself from it by playing it silly, but he's the guy who directed Mandingo. It's hard to imagine him embarrassed by anything after that. And because Conan the Destroyer was a success, Fleischer was hired to direct Red Sonja, another movie he helped ruin. 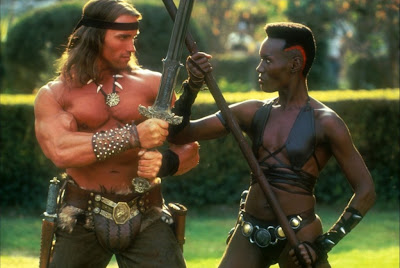 Why the change from R to PG? The same reason we get today: box office. Plenty of people complain about how tons of movies that should be rated R go out as a PG-13 so they can make more money (the latest example is Jose Padhila's upcoming RoboCop remake, which will be released PG-13 because no one involved understands RoboCop). I know people complain about it because I am one of those people. But it turns out that movie studios were doing that shit as far back as 1984. And just like today when PG-13 movies are secretly R-rated, Conan the Destroyer is way too violent for a PG (though the standards for PG were different in the '80s). So it ends up being a movie that satisfies no one: too much blood for kids but too soft and silly for adults.

So who is the audience for this movie? Seven-year old me, it turns out. I cannot defend my affection for Conan the Destroyer except to say that I have a high tolerance for this stuff and the affinity for '80s genre movies that led me to write a column about '80s genre movies in the first place.

In Conan the Destroyer, Conan is just going about his travels with his companion Malak (Tracey Walter) when he is tasked by Queen Taramis to protect her niece, Jehnna (Olivia d'Abo), on her quest to find a special jewel. Apparently, jewel-finding is Jehnna's destiny. Queen Taramis wants the jewel because it can be used to find the artifact that will awaken the god Dagoth. ARE YOU READING THIS? The jewel won't even awaken Dagoth. They looking for the thing that will help them find the thing to awaken the god. Also, Taramis and Dagoth are the kinds of words that turn off all but the die-hard fantasy fans.

At any rate, Queen Taramis has a secret plan: she's going to kill Jehnna by sacrificing her to Dagoth. I think it will give her ultimate power? That's what these a-holes are usually after in these kinds of movies. What she wants to do with that ultimate power, I can't say. It's always something vague like "rule," but what does that even mean? Just once I wish someone would be specific. Like "I will have the ultimate power! And then I will be able to redecorate the kingdom the way I want! CHANGE THE DRAPES!" Jesus, SOMETHING. So Taramis sends her bodyguard, Bombaata (Wilt Chamberlain), along for the journey, whose instructions are to kill Conan once the quest is complete. Along the way, our roving band of jewel-searchers pick up Conan's old friend Akiro the wizard (Mako, returning from the first movie) and a warrior thief named Zula (Grace Jones). The rest of the movie consists of the group traveling from one place to the next, occasionally stopping to fight a wizard, rescue a kidnapped companion or break a bunch of mirrors. Regular quest stuff. 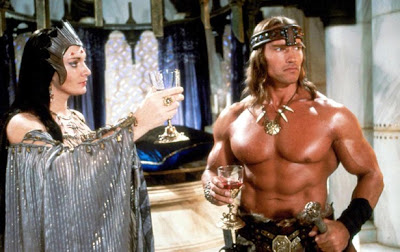 My memory of the movie has always been that it climaxes with the scene in which Conan has to fight the rubber-masked guy in the hall of mirrors, only to discover that breaking the mirrors hurts the guy right in his rubber face. Turns out that fight takes place halfway through the movie, and that there's still a good (not "good") 45 minutes of everyone riding horses and wandering around. There's another battle with the god Dagoth, another rubber monster that's supposedly played by an uncredited Andre the Giant. Both fight scenes lack the muscle and brutality of Conan's better fight scenes; it's almost like they made the choreography up on the spot. What saves the Dagoth fight is the sheer cruelty and viciousness with which Conan pulls the horn from the monster's face. Slowly. Painfully.

There's very little about the second movie that feels at all like the first except that it has a character named Conan and the word Conan is in the title. It's so much the B-grade knockoff of the first film that I would accuse it of being a total ripoff (another Deathstalker or Hercules [the Lou Ferrigno one]) if I didn't know that several of the same people were involved.

Everything about Conan the Destroyer feels like a comedown from the original movie. The first film's lifelong drive for revenge has been replaced by a totally generic quest. Conan has been changed by a guy on a personal mission to a gun for hire. The violence, while still really hard for a PG rating, has been watered down and feels more cartoonish. Even the cast is a backslide. The gravitas of Tulsa Doom has been replaced by Sarah Douglas, a genre actress best known for playing General Zod's female sidekick Ursa in Superman II (and for being in fucking Solarbabies, of course). James Earl Jones she is not. The rest of Conan the Destroyer feels like it was stunt cast: there's legendary NBA center Wilt Chamberlain, who took a break from fucking thousands of women long enough to make a rare film appearance as Bombaata. There's Grace Jones, the model/singer/actress/weirdo and all-around self-made celebrity filling Sandahl Bergman's sandals as the movie's warrior woman. There's a pre-Wonder Years Olivia d'Abo, here only 15, still in her "innocent" period a few months shy of her first nude scene. There's ubiquitous character actor Tracey Walter, co-star of every fourth movie that gets made. There's Mako, who is Asian. 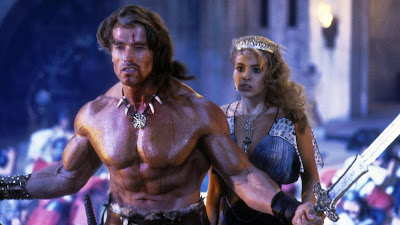 And then there is Arnold. Schwarzenegger was so good in the original Conan that it seemed like he had been invented just to play the part, but The Destroyer brings out some of his worst tendencies. He is no longer playing a character so much as wearing the costume. Gone is Conan's philosophy and worldview. Gone even is his motivation. Conan shows up in this movie because his name is in the title. There are attempts to tie the character back to the events of the first movie -- he laments the (SPOILERS for Conan the Barbarian) death of Valeria, his warrior queen love, but even that comes off as mostly drunken rambling. He bugs his eyes and pulls his face and feels much less like a bodybuilder who acquits himself as an actor and more like a bodybuilder who tries to act and fails. This movie was released the same year as The Terminator, and it's interesting how the two movies represent Arnold's two possible career paths. Let's all be happy he buddied up to James Cameron.

The '80s were ruled by sword and sorcery movies, most of which were made very, VERY cheaply and/or were imported from Europe. Conan the Destroyer is one of the few A-list entries into the genre, in that it was released by Universal and had some big-name talent behind it (Schwarzenegger was not quite "Schwarzenegger" yet, but he also wasn't Marc Singer). And, yet, it's the still the knock-off of the two Conan movies -- the B-side, the bastard child, the other cliche. Somehow it manages to be the second-best Conan movie ever made, a list that also includes Red Sonja (because close enough), Kull the Conqueror (made because they couldn't make a new Conan movie) and the 2011 Conan the Barbarian (made because Marcus Nispel hates you).

The worst part about Conan the Destroyer? No cat lady sex.

Posted by Patrick Bromley at 12:01 PM