It Came from the '80s: Solarbabies 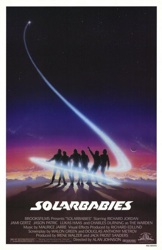 In the future, everyone will rollerskate.

That is the future posited by the 1986 sci-fi/post apocalyptic teen movie Rollerbabies, directed by former Mel Brooks choreographer Alan Johnson. Of course, the notion that the future would be dominated by rollerskating isn't exclusive to Solarbabies. There's the 1975 Rollerball. And there's Prayer of the Rollerboys. And the Rollerball remake. I mean, the list goes on and on. And, to be fair, rollerskating doesn't really dominate Solarbabies. It's just one of the many "futuristic" ideas to which the movie can't be bothered to commit.

This was my first viewing of Solarbabies, and it is the kind of movie that's so bad it makes your head explode trying to keep up with all of the terrible choices being made by everyone involved. It is, in many ways, the logical conclusion of the genre-happy '80s -- a conclusion that arrived four years before the decade was even over, because that's how fucking stupid Solarbabies is. It killed the 1980s. There was so much science fiction in the decade, and so much of it was directed at teenagers and kids, that a movie like Solarbabies somehow made it past the "What the fuck are you talking about/you're fired" stage of the filmmaking process.

I have to believe that when it was time to start the screenplay, Johnson and his writers, Walon Green and Douglas Anthony Metrov, went out and procured the scripts of every science fiction movie of the last 10 years. Walon was carrying them all in a stack, and Douglas Anthony said something hilarious (Douglas Anthony is such a cutup) and Walon started laughing -- you know that kind of laugh were your whole body starts to shake? It was that kind of laugh. And then Alan Johnson, mid-jazz square, was all "Be careful, Walon!" but trying not to laugh only made Walon laugh harder and he ended up dropping the stack of scripts. Hundreds upon hundreds of pieces of paper fell to the floor, mixing together until it was impossible to tell which ones belonged to which script. It was at that point that Johnson told Walon and Douglas Anthony to just scoop all the pages up, tap them on the desk a few times in that way that makes a pile, and that was their script for this movie. And then Walon asked "What should we call this thing?" and so the three of them took a bunch of mescaline, murdered a whore and said "Fuck it, how about Solarbabies?"

Let's not leave out all the crazy detours, either. Like Adrian Pasdar's character, the mysterious orphan Darstar, who has long hair and braids and a pet owl on his shoulder and who stares off mysteriously all the time. It seems like his character is going to pay off at some point, like he's the key to all this. He isn't. WHY IS HE IN THIS MOVIE AND WHAT IS WITH HIS HAIR? Richard Jordan shows up dressed like Raul Julia (RIP) as General Bison (RIP). In the last 15 minutes, he introduces a murderous robot bird. Do you know how jarring it is to watch a movie that for 75 minutes has been basically robotless and then have it introduce a robot at the very end? The robot bird's function is to figure out the deal with the glowing sphere -- which, yes, has a name, but I refuse to use it. Ok, ok. It's Bodhai. Pronounced "Bode-eye." Sometimes, people call it Bodhi. Pronounced "100% pure adrenaline." Then Lukas Haas corrects them. This serves no purpose and never pays off. Also, Lukas Haas is wearing electric ears at the beginning of the movie, but his hearing is cured when he meets Bodhai. This doesn't really pay off, either, except to introduce that Bodhai has magic powers. The second demonstration of these magic powers is when he makes it rain indoors for about 90 seconds. Then he shuts it off. First taste is free, fuckers. Then you have to pay for it.

Seriously, though: this glowing ball is on a planet with no water, has the power to make it rain but doesn't? Glowing ASSHOLE is more like it.

By the way, no one is really surprised or amazed when Lukas Haas brings home a new friend and it's a glowing ball that talks to him and says its name is Bodhai. Everyone's pretty much "Yeah, of course that's a thing, but can it rollerskate? And where are your electric ears? And how do we power electric ears? And how do we know what electricity is?"

The most egregious stuff in Solarbabies -- besides the stupid shit I just mentioned -- is that it's one of these fucking sci-fi movies in which the screenwriters think that just changing a few words around (or, even worse, just adding on to existing words) somehow means it's THE FUTURE. The military douchebags who hog all the water are called the Eco Protectorate. The police are called the E-police. When Charles Durning orders the orphans to dig, he says "Give me 30 cubic meters." Because in the future, manual labor is measured by volume.

Oh, right. Charles Durning is in this movie. He runs the orphanage. At one point, he says "I don't want this orphanage to run like a prison!" He says this even though his character is named The Warden. And the orphans are basically wearing prison jumpsuits. And there are guards everywhere. And he makes them dig a hole as punishment. A 30 cubic meter hole.

The cast alone should make for a very entertaining movie, but everyone is stranded by the material and, as a result, does some of the worst work they've ever done. Jason Patric and James LeGros appear visibly embarrassed. Jamie Gertz throws herself into the nonsense with total sincerity, but winds up looking like a complete fool. Lukas Haas can't really be faulted because he's just a kid, but he seems to have learned a lot of his lines phonetically. He also walks around with such an expression of wonderment that, for a time, I became convinced that being in the movie Solarbabies was his Make-a-Wish. Peter DeLuise hardly registers, mostly playing the dumb muscle. That's even more disappointing because this is one of his only big screen credits. The only other one I can think of is Free Ride, in which he superglued his hand to his dick way before it was cool. Claude Brooks, as the movie's token black guy, has one little showcase in which he gets the glowing ball and breakdances with it. Because in the future, water might be gone but racism is not.

Because it was directed by his former choreographer, Solarbabies was produced through Mel Brooks' Brooksfilms. Consider the fact that Brooksfilms' other production in 1986 was the David Cronenberg remake of The Fly, which is a masterpiece. The only thing it was missing? Rollerskating. Glowing balls. Jamie Gertz.

I try very hard in these columns not to just write out a litany of things are stupid or wrong with a movie, because it's way more interesting to try to place a movie -- even a bad one -- in context and figure out what it's at least trying to achieve. I can't really do that with Solarbabies, because I don't think the movie is really trying to achieve anything. It rips off countless other better movies. It is derivative in the worst way. Its biggest sin, though, is that it turns the science fiction genre movies of the '80s into the thing that so many of their critics accuse them of being: complete nonsense.

Some of you will feel I've been too harsh. You will say you have a soft spot in your heart for Solarbabies, probably because you saw it on HBO a lot growing up (I don't know how I missed it; it really was on all the time) and it has a bunch of random elements in it that a seven-year old might think are neat: rollerskating, glowing ball, bird robot, Charles Durning. A seven-year old can't figure out that none of these things connect. Or are good. This is the danger of these "It Came from the '80s" columns: we confuse nostalgia for quality. Do yourself a favor and rewatch Solarbabies. Let me know if you think it holds up.

Posted by Patrick Bromley at 6:34 AM