It Came From the '80s: Flash Gordon 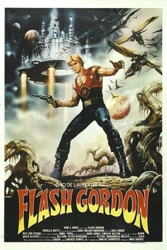 Welcome to yet another new column at F This Movie!.

As anyone who regularly reads my "Heavy Action" column or who remembers the lineup for this year's F This Movie Fest knows, I have a deep, deep love for '80s genre movies. I was a child of cable TV, well-versed in everything from the classics that played in heavy rotation on HBO and TMC to the more obscure deep cuts of USA Up All Night, a show for which I would forgo hours of sleep so that I wouldn't miss it.

I love '80s action movies, but those are being covered elsewhere on this site. I love, love, love '80s horror, but there are countless sites already devoted to the subject. This column, which will run when it runs, will instead devote itself to science fiction and fantasy movies of the 1980s, because there was a SHIT TON of that during the decade. Please understand that I will not just be approaching these movies simply as someone with fond memories of watching so many of them on cable growing up, even though I have fond memories of watching so many many of them on cable growing up. Nor will I be approaching any of these movies ironically, because I hate that. Yes, I know a lot of the decade's genre output was terrible. That doesn't mean I'm going to spend a 1,000 words a week just ripping on something. If something is bad, let's figure out why it's bad -- or, better yet, if it's secretly good.

This brings us to the Dino DeLaurentis-produced Flash Gordon from 1980, a movie that's been classified as 'so bad it's good' practically since it was released despite the fact that it's really so good it's good. Ironic successes (like Troll 2 or Birdemic) work on terms other than what they intended. Flash Gordon works because it's exactly the movie that it wants to be. 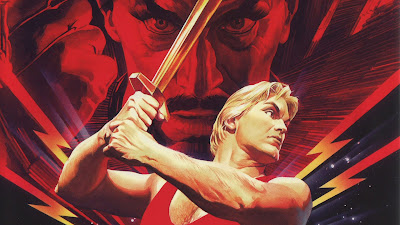 There were and are a lot of fans of Alex Raymond's original Flash Gordon comic strip from the '30s that hate what director Mike Hodges and screenwriter Lorenzo Semple Jr. did to the character in the film adaptation, because it doesn't treat the character with the proper seriousness and reverence. It's too silly and campy at times -- more Barbarella than Star Wars. Now, it would be easy to tell those people to lighten up and suggest that it's just a comic strip and shouldn't be taken that seriously. Writer Semple Jr. has said as much. Maybe there's some truth to that, but I don't really think so. I mean, Batman is just a comic book character, but we can all agree that the '60s TV series doesn't really him justice, right? These people love the character of Flash Gordon, and the only opportunity they've had to see his world in a big screen adaptation was, in their eyes, squandered by a group of people who goofed on it.

I get why Flash Gordon fans don't like Flash Gordon. But those of us who didn't go into the movie with any preexisting notions or affection for the character can better appreciate the movie for what it is, divorced from what we think it should be. Sometimes, it's a sincere attempt at space opera. Sometimes it's a goofy parody. At times, it tries to be funny and fails. Other times, it's funny by accident. It's silly. It's violent. Juvenile. Kinky. It's such a weird mix of tones across the board -- and that includes the acting. Sam Jones, a former Playgirl centerfold who was still fairly new to acting at the time, is all stiff and corny, clearly doing his best at playing the square-jawed hero. He either doesn't know what movie he's starring in or never lets on that he knows it's goofy. There's no winking at the camera; either way, the result works in the same way that Casper Van Dien's performance in Starship Troopers works. It's pure, stone-faced sincerity. Melody Anderson is in a '30s screwball comedy. Timothy Dalton plays it straight and makes for a pretty good swashbuckling scoundrel. Max von Sydow, star of many SAD and SOMBER Bergman films, mostly underplays as the villainous Ming the Merciless. British actor Brian Blessed goes 180 degrees the other direction, cackling and shouting every single one of his lines. Richard O'Brien is on hand almost as a predictor of the film's eventual cult status. Broadway legend Topol shows up. Italian model-turned-actress Ornella Muti makes her English-language debut, often sounding like she might have learned her lines phonetically ("Not the bore worms!"). Everyone is acting in a different movie, and the mixture of styles creates a kind of fascinating alchemy. It's some kind of beautiful mistake.

Large parts of the movie feel like a dream, from the burning red skies to the loose, episodic narrative (like you're drifting in and out of someone else's consciousness) to the fact that Sam Jones' voice has been dubbed over by another actor. It gives Flash a kind of flat remove from everything, despite the fact that Jones is committed to every second he's on screen; the two things don't match up, like the "Silencio" sequence in Mullholland Dr. ("There is no band, and yet we hear a band.") Characters float around on wires in the film, too light to be realistic but too heavy to be a special effect. Your eyes can't quite trust what they see in Flash Gordon.

Then there's the production and costume design by Danilo Donati, the movie's true mad genius. Every choice made about the look of the movie is so overly ornate, so big, so bathed in blood red and shiny gold. It's gloriously, beautifully TACKY -- science fiction by way of Donald Trump. Every set is ten times larger and more complicated than it needs to be, and often times has nothing to do with the demands of the story (Donati refused to read scripts, instead just designing what he "felt"). It's like the Krypton segments of Superman: The Movie, stretched to feature length. And on Mescalin. Producer Dino DeLaurentis was famous for attempting to reinterpret and recreate American successes but getting them wrong, and Flash Gordon represents his effort to cash in on Star Wars but fundamentally misunderstands much of what made that movie work. Lucas created a world that was fantastic but felt lived-in -- it was grounded in its own kind of reality. DeLaurentis and Donati instead build a world that is pristine and expensive and SHINY, jamming every corner of every frame with something to look at. Lucas wouldn't do that until the Special Editions.

And, of course, I've gone on and one about all of the things that are interesting or special about Flash Gordon without a single mention of what puts it into the stratosphere: the soundtrack by Queen. Nowadays, the refrain of the "Flash! Ah--aaah!" theme just adds to the camp factor with most audiences -- it's what they remember when they think of the movie. But what gets ignored is that score KICKS FUCKING ASS and is yet another contributing factor to the movie's fascinating personality. This is a loud, gaudy movie, and the glam rock score by the all-time greatest glam rock band suits it perfectly and distinguishes it from every other genre movie of the decade. DeLaurentis tried the same trick again a few years later by getting Toto to score Dune, and while I dig the music in that movie, the results just weren't the same.

I had the privilege of seeing Flash Gordon screened with an audience last year, and the movie PLAYS. Some of the reaction was ironic hipster laughter, no doubt, but most of it was just the laughter of people having a great time. So many genre movies from the '80s are so plodding and lifeless (has anyone actually tried to watch Metalstorm: The Destruction of Jared Syn lately?) that we should give due credit to a movie that's so super entertaining. Ultimately, that's what Flash Gordon is: a movie that does everything in its power -- and some things outside of its power -- to entertain the audience. It's SO MUCH FUN.

On the Blu-ray (and special edition DVD) of the movie, artist Alex Ross (who calls Flash Gordon his favorite movie of all time) gets right at the heart of what makes the movie special: it is unlike any movie ever made. Whether or not you like the finished product, it's hard to disagree with him.

Not every It Came From the '80s column will be this easy, because for every Flash Gordon there is a Gor. For every Beastmaster, there is a Deathstalker. For every Secret of NIMH, there is a Care Bears Movie II. Hopefully, you guys will stick with me through the good, the bad and the Ice Pirates.

Don't forget to order tickets for the upcoming F This Movie! screening of Die Hard in Chicago on August 2nd.
Posted by Patrick Bromley at 6:36 AM