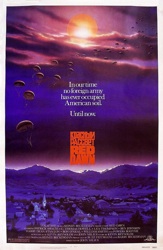 Though the majority of '80s action movies are mostly devoted to over-the-top gunfire and one-liners, there's a short list of the decade's output that is overtly political, dressing up the genre's typical crassness and violence with an inflated sense of patriotism and, more often than not, total revisionism for actual world events. It's how Chuck Norris goes back to Vietnam and rescues all the P.O.W.s in Missing in Action. Stallone does him one better in Rambo: First Blood Part II -- not only does he return to Vietnam and rescue all the P.O.W.s single-handedly, but actually goes ahead and retroactively "wins" the war for the U.S. while he's at it.

In Red Dawn, co-writer and director John Milius (writer of Apocalypse Now and director of the great Conan the Barbarian) doesn't want to necessarily rewrite history; he wants to scare the shit out of us regarding the future -- or one possible future, anyway. It's the future the U.S. (of 1985) is headed for if they don't STOP BEING PUSSIES and start arming themselves to the teeth, readying themselves for the inevitable Soviet invasion that was on everyone's mind during Reagan's first term. It never actually happened, of course, either because a) it was never actually going to happen, and was just another example of fear mongering on the part of the U.S. government designed to whip voters into a frenzy and roll back their civil rights or b) because movies like Red Dawn had successfully prepared us for battle, and the fucking Russians knew it. I don't think it's the second one. I also don't think it's the first one, because the actualities of politics are complicated and delicate and well beyond the understanding of movie blogs and Fox News. 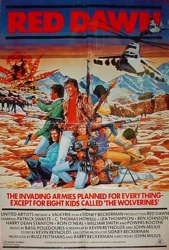 So rather than talk about Red Dawn within the political context of the time, I'd rather talk about how the movie is clearly the work of a madman -- probably the best, clearest expression of John Milius as an artist and a filmmaker ever made. This is an action movie not so much dedicated to entertaining its audience as it is inviting them into the mind of its maker and showing them all of the things he believes. Never let it be said that the action genre cannot be used for auteurist expression.

The small town of Calument, Colorado is invaded by Russian and Cuban armies, who immediately begin rounding up prisoners and setting up an occupation. Patrick Swayze (Steel Dawn, Road House, motherfucking Point Break) and Charlie Sheen (Terminal Velocity, Navy SEALS) are brothers Jed and Matt Eckert, who evade capture, stock up on supplies from a sporting goods store and escape into the mountains with their friends Robert (C. Thomas Howell, later to appear in blackface in Soul Man), Daryl (Darren Dalton), Danny (Brad Savage) and "Aardvark" (Doug Toby). They hide out for several weeks before returning to town and discover it has become a kind of police state, with many of the citizens (including the Eckert boys' father, played by Harry Dean "Avenge Me" Stanton) being rounded up and placed into reeducation camps. Returning back to the mountains, the boys gradually mount an armed resistance, dubbing themselves the "Wolverines" (named for their high school mascot). Their families are killed. They pick up two girls, Toni (Jennifer Grey) and Erica (Lea Thompson of Howard the Duck and some time travel bullshit), that they are charged with protecting. The insurgency grows; as the Wolverines become more and more of a threat to the Soviet invaders, they begin executing townspeople to bring the boys out of hiding. Shit gets real. 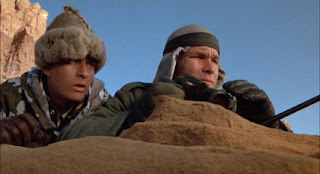 There is a ton of plot in Red Dawn, which is hard to believe since it seems like it's mostly a movie about people shooting at each other. New developments spring up every 15 minutes or so. Characters are forced to swallow tracking devices. The mayor gets involved. I haven't even gotten to Powers Booth (of Sudden Death and Rapid Fire fame), who shows up in the middle third as an Air Force pilot that's been shot down and delivers an endless amount of exposition about what's going on in the rest of the country. I guess it's a much cheaper way of suggesting that a lot of the U.S. has been invaded and taken over without actually having to show any of it.

The cast of Red Dawn is made up of a lot of young stars and (at the time) up-and-comers -- kind of a "Brat Pack goes to war" -- but to what end, exactly? It doesn't appear to be some sort of cynical marketing ploy to get young people into the theater, but without that as an explanation the choice makes even less sense. Is the movie somehow better served by focusing on a bunch of teenagers? Or is this just Milius's attempt to convince us that the young generation has to learn to fight and prepare themselves for the coming invasion? Is America's security being placed on the backs of high school students? If it was a Paul Verhoeven movie, this stuff would be played for laughs. John Milius MEANS IT.

Take, for example, the scene in which C. Thomas Howell ("That's the Spider-Man that saved my son!") hunts and kills his first deer, then is forced to drink its blood by Swayze and Sheen. It's one of the craziest things I've even been asked to take seriously in a movie, and all I could think about was how funny it would be if Paul Verhoeven was directing. Instead, Milius has his characters spout some bullshit about the "spirit of the deer" and DRINKING BLOOD makes you a "real hunter" and HE MEANS IT. I seriously kept waiting for Swayze and Sheen to bust out laughing halfway through the scene, like their characters had come up with this crazy dare just to see if Howell would do it. It never happened. Everyone is serious about deer blood.

Why not take it to its logical conclusion? Why doesn't Chuck Sheen drink the blood of the Russian soldiers he kills? Oh, right. Because he's not "hunting" them; he's "protecting" himself. And everyone knows that drinking blood doesn't make you a real protector. For that you have to get peed on. 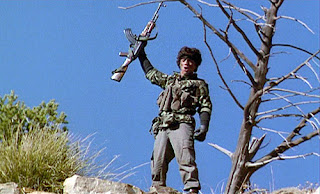 There is one moment in the movie where it seems like Milius could be demonstrating a slightly liberal slant: there's a shot of a pickup truck with a bumper sticker plastered on the back that reads "You can have my gun when you pry it from my cold, dead hands." The camera than pans to the left, where we see the driver of the truck dead on the ground, at which point the gun he was clutching is pried from his cold, dead hand by a Russian soldier. So it's all for nothing, right? The guy runs around promoting his right to bear arms and still winds up dead; for all we know, the fact that he was carrying a gun is the reason he's dead. That's at least a little progressive -- especially for John Milius, right?

Except, no. That's not really what the scene is about at all. Milius isn't commenting on the irony of the visual; he's commemorating the faceless extra's commitment to his ideals. That he's dead isn't an issue, because he put his fucking money where his mouth was. The same should be expected of all of us.

For all its faults, Red Dawn is pretty easy to watch, except that section in the middle with Powers Boothe. And a lot of stuff at the beginning. And the scene in which the evil General Bella lets Swayze and Sheen go, I guess because they are brothers? The man has had innocent people executed left and right just so he could catch the Wolverines, but decides not to kill them because he is moved. That would be like Hans Gruber finally catching John McClane but letting him go once he finds out he's married. Except it's not even the same, because Gruber is a common thief (sorry...EXCEPTIONAL thief) and Bella is a war monger and a murderer. But, you know, brothers.

It helps that Milius knows how to make a movie, and that he puts his whole heart into it -- this isn't just another hacky director-for-hire jobs that are so common to the genre. As much as I disagree with the worldview on display, it's good to see an '80s action movie that is such a personal expression of its creator. That kind of thing is rare, and it shouldn't be taken for granted just because the creator in question is all bullets, balls and batshit.

But Red Dawn's greatest legacy isn't John Milius's jingoist fear mongering. It's that it was the first PG-13 movie ever released, and, at the time it was released, set a Guiness Book record for the most onscreen acts of violence. Watching it now, that's hard to believe, but that's only because the true '80s style action movie -- the one that's nothing BUT acts of violence -- wasn't really born until after Red Dawn. Plus, to be fair, it was really Gremlins and Indiana Jones and the Temple of Doom that led to the rating being created; Red Dawn was just the first movie that actually had to carry the PG-13 tag.

There are plenty of radical right wingers who no doubt love Red Dawn (it was named the 15th "best conservative movie of all time" by the National Review Online, which is proof that conservatives are a) ridiculous and b) love bad movies) because it confirms everything they believe and justifies their need to own as many firearms as possible. That's like loving Ghostbusters because it affirms your belief in giant marshmellow men. Both movies are fantasies. Only one of them cops to it.

I don't think I'm being a square. I fucking love violent action movies. It's totally within the realm of possibility that a kick ass action movie can be made about a small town that's invaded by outside forces and has to defend itself, but Red Dawn is too loaded up with nonsense and bullshit to be that movie. It's the kind of movie that nowadays is embraced by two camps: those who love it because they take it at face value and buy what it's selling, and those who know that it's goofy and choose to embrace it ironically. I have no patience for either group. 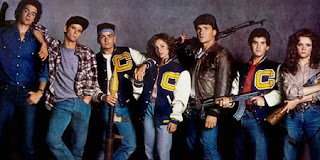 Posted by Patrick Bromley at 5:14 AM