In a few weeks, Kiefer Sutherland will be back on television as 24 returns for twelve more episodes after being gone from the airwaves for four years. I love Kiefer Sutherland more than I do most actors; blame it on the ‘80s and movies like Stand by Me and The Lost Boys…I’ll even throw Flatliners onto that list. He was always just SO COOL -- an actor that always drew me in. I wanted to be him, and I think I still do. I would, and still will, watch a movie just because he’s in it. What I’m saying is that I have a man-crush on Kiefer.

But if I love Kiefer Sutherland, I love the tag team of awesomeness created by adding Lou Diamond Phillips to the mix even more. Sutherland and Phillips have only worked together five times: The 1988 film Young Guns and its 1991 sequel Young Guns II, 1989’s cop movie Renegades, a 2000 Woody Allen movie called Picking Up the Pieces and two episodes from the first season of 24 in 2002.

Though only three of those projects are really worth mentioning (the Young Guns films and Renegades), the Kiefer/Lou friendship seems to be the stuff of legend and the two men have a bromance that’s lasted for two-and-a-half decades now. There’s actually a series of slash fiction (as in homo-erotic fan fiction) based not just on the movies they’ve been in, but on their real life friendship. Most slash fiction is based on genre properties, not on people. So they’ve got that going for them. Which is nice.

That friendship is so magnetic for the rest of us that the Phillips guest spot on 24 wasn’t the idea of either man. The show-runners created the role with the actor in mind and actually offered it to him before there was even a script. When Phillips called Kiefer to ask him whether he should take the part or not, Sutherland had no idea the role had been created for his friend but told him to say yes immediately. That’s how eager they were to work together again and that’s how badly people wanted to SEE THEM work together again.

I suppose my favorite Kiefer/Lou film is Young Guns II, which is not a better movie than the first Young Guns but has some sort of quality that draws me to it more. I think it’s pulpier and slightly sleazier, and it has the Jon Bon Jovi song “Blaze of Glory,” which was (alright, it still is) one of my all-time favorites. I’ve bought that song more times than I care to admit, most recently tracking down a 12 inch vinyl pressing of the soundtrack. The 1990 Heath loved when the music video would come on MTV and Bon Jovi played the song out in the desert at an abandoned drive-in movie screen that shows scenes from the movie. Right now I’m wearing jeans and a black vest over my bare chest. That’s usually how I write these things.

But the Kiefer/Lou movie that seems to have flown under the radar for most people is Renegades. It came out in 1989, one year after Young Guns and one year before Young Guns II, and IF 1989 can be summed up in one movie, it’s Renegades. It embraces all the clichés. Sutherland plays a “renegade” undercover cop named Buster McHenry (that’s right) who just can’t fall in line with authority. We know this from his first scene, where he stops an armed stand-off (at night, on wet city streets no less) between police and a gang by pretending to be drunk in order to get close to a hostage. When the dust has settled and the police officer in charge asks who he is, he smacks the guy in the face. Buster always wears a black leather jacket and has a thin little mustache that says “you can’t tame this wild horse.” He’s the kind of cop that Serpico would lose sleep worrying about.

Phillips is a “renegade” Native American named Hank Storm who has had a ceremonial spear stolen from his tribe (Lakota Sioux) by an organized crime outfit. He sets out to recover the spear all by himself using nothing but his sweet Sioux skills and a healthy dose of Native American mysticism. His warrior spirit apparently makes him a sweet fighter, too. Side note: The movie is also helped by the casting of Jami Gertz, who had played Star in The Lost Boys with Sutherland two years earlier, but only from a “hey, it’s that girl” aspect. She doesn’t really have anything to do, and it looks like she only filmed for a couple of days. 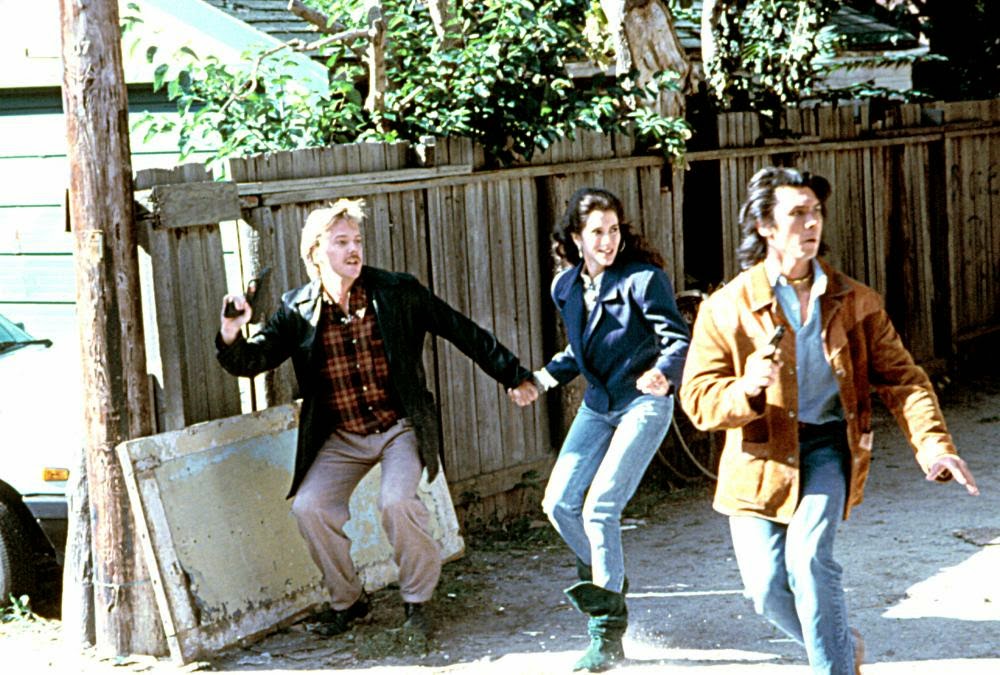 Renegades is not a very good movie, but it’s classic Kiefer/Lou. You know what happens before you even see it. They start off hating each other, eventually form a mutual respect, then, by the end, they’re making out and ripping each other’s clothes off. Oh, wait! That’s the slash fiction I was writing.

The film was directed by Jack Sholder, the same man who directed A Nightmare on Elm Street 2: Freddy’s Revenge, which was full of homosexual subtext of which Sholder says he was completely unaware. Was he also unaware of the budding bromance between Kiefer and Lou? Am I supposed to believe this is all a big coincidence?! Okay. It probably is.

A few things work in Renegades’ favor. The first is that it never commits to being as over-the-top as some of its peers from the same period in time. Both Jean-Claude Van Damme and Dolph Lundgren (come to think of it, Steven Seagal, too) had action movies around this time that were more stylized and went WAY bigger. Renegades manages to embrace every cliché while still keeping its feet on the ground and not veering into comic book territory, either deliberately or as a function of the low budget. It feels a little bit like an oddity. It’s very much a cop action/drama flick from 1989, but it never really rises to the heights you expect it to. It almost feels like a cable movie. Like one of those late ‘80s HBO originals.

I also have to mention that the film closes with a Bryan Adams song that comes out of nowhere and then plays jauntily over the end credits. I don’t really care for Bryan Adams that much, but I seem to like every movie he contributes his music to. Every movie from this era was contractually required to feature a rock song over the credits and Bryan Adams seems to have made a career out of it. 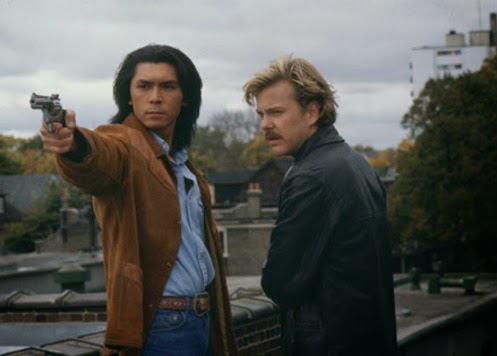 Siskel and Ebert reviewed Renegades on their TV show in 1989. Boy, they did NOT like it, pointing out that it features over three chase scenes (meaning that the writers didn’t know what else to do) a rooftop jump (which was hack even in 1989) and a predictable final act. Ebert points out that a motorcycle appears at the end of the film just when Kiefer Sutherland needs one and it’s a shame that in real life there isn’t always a motorcycle when you need one. And I could swear that, while Ebert goes over the plot synopsis, Siskel giggles.

I can’t argue with any of their points because they’re all accurate, but that’s kind of why I want to watch Renegades in the first place. I like this particular era of hack. It’s a great movie to throw on at 11 o’clock at night and just chill with. For your viewing enjoyment, the entire Siskel and Ebert episode is available to stream from their website SiskelandEbert.org (thanks, Adam Riske). I will say that out of the five films they review on the episode (Star Trek V, No Holds Barred, Dead Poets Society, a jazz documentary called Let’s Get Lost, and this film, there’s a cumulative total of two thumbs up and eight thumbs down. This either proves that most movies aren’t very good or Siskel and Ebert had really high standards. I suspect both are true.

Renegades used to be on Netflix streaming but it isn’t anymore. If it ever comes back, I’ll recommend it because I think the pros definitely outweigh the cons. Plus, as one of only three major movie collaborations between two of my big man-crushes, it’s required viewing. 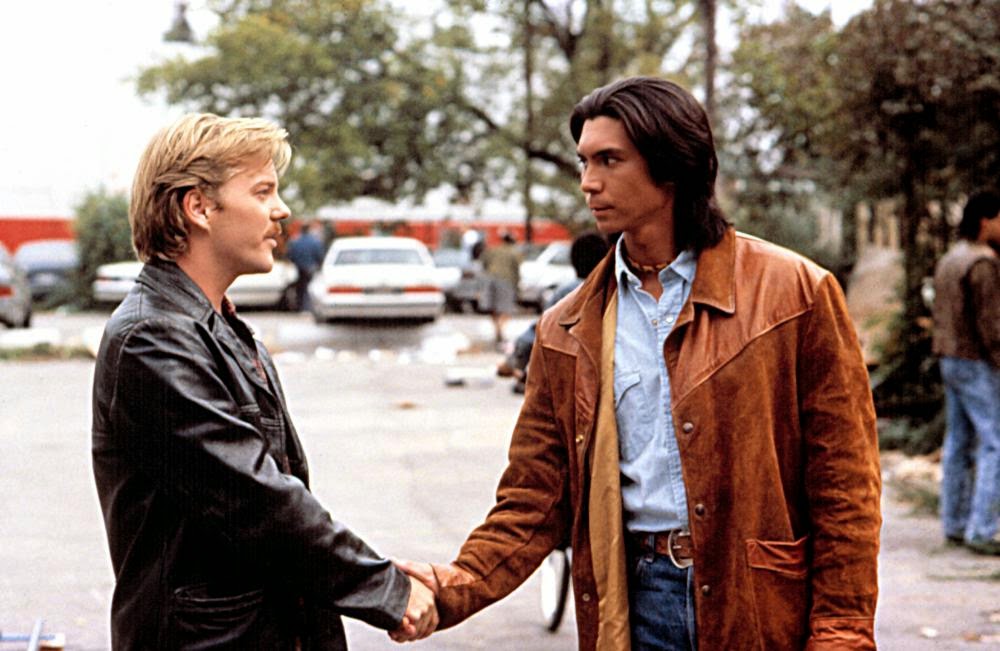 It’s been over ten years since the last Kiefer/Lou collaboration on 24, but they still seem to be close and have a lot of affection for each other. In a 2010 interview promoting his work on the TV show SGU: Stargate Universe, Lou Diamond Phillips recounted how much he “adores” Kiefer and says that he would crawl through broken glass to work with Sutherland again. And I think I’d crawl through broken glass to see it.
Posted by Patrick Bromley at 12:27 PM