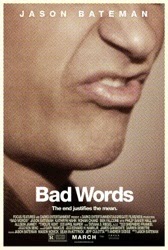 Bad Words, the directorial debut of actor Jason Bateman, puts way too much stock in the comedic potential of shock value. It is capable of being funny, sure, but it's a movie that works way better in its dramatic moments. The hook of the movie -- adult man enters kids' spelling bee -- is inherently comic, but Bad Words is at its best when it examines the anger that exists under the surface.

Bateman plays Guy Trilby, a genius-level 40-year old asshole who begins competing in children's spelling bees on a technical loophole. Hated by parents and the higher-ups at the National Quill spelling bee, Guy is unapologetic in the way he takes out his child competitors with mind games and bullying. As a friendship with fellow speller Chaitanya (Rohan Chand) begins to develop, the chinks in Guy's armor start to present themselves and the truth of his real motivations come to light. 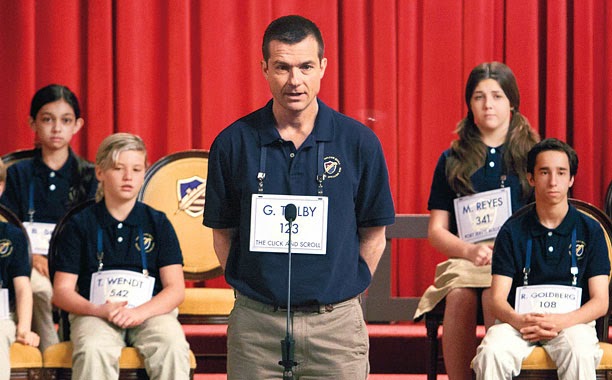 I've been a fan of Jason Bateman since his days on Silver Spoons, when I embraced him as a knock-off Michael J. Fox (I collected Cracked and not MAD). To prove me right, he was cast in Teen Wolf Too, which I saw during its theatrical run. I was sad during the years he went away, and genuinely thrilled when Roger Kumble brought him back for a supporting character role in the otherwise-terrible The Sweetest Thing (in true Bateman fashion, he steals the movie in a handful of scenes). Seeing his career finally catch fire with the cult success of Arrested Development -- the first project that really knew exactly how to use Bateman's specific talents -- was rewarding as a fan, and the guy has only gotten bigger since then.

After a string of not-great box office successes including Horrible Bosses and Identity Thief, he has finally built up enough clout that he has now become Jason Bateman, Director, looking to follow in the same career path as Ben Stiller and Ben Affleck (he recently said as much in an interview on Howard Stern). And as a director, Bateman proves to be pretty accomplished. He's clearly surrounded himself with a good crew, including DP Ken Seng doing the best-looking work of his career. He handles the changes in tone well, making a movie that feels like it's all of a piece despite the fact that the script isn't fully a comedy nor fully a drama. It feels like he used the work of Paul Thomas Anderson as a jumping off point (maybe because of the quiz show sequences in Magnolia, or because of Anderson's own motif of fathers and sons), as much of Bad Words feels informed by the artistic choices of that auteur. It's there in the low-angle tracking shots and the solid, Michael Penn-esque score by Rolfe Kent. As influences go, Bateman could do a lot worse. 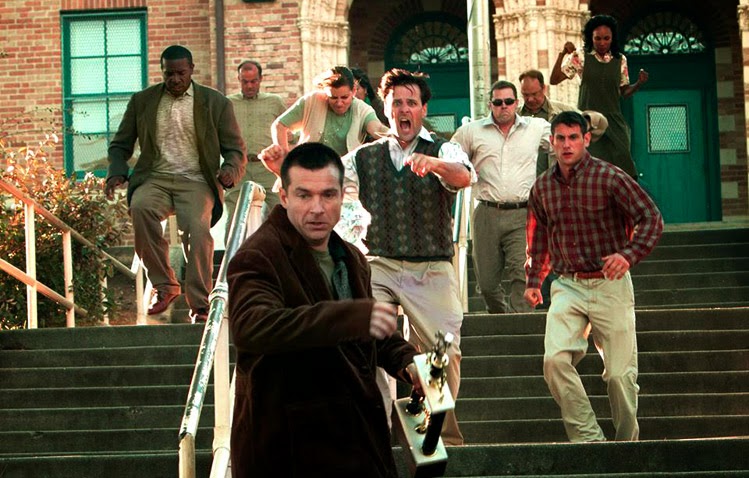 Then there's Bateman the actor, who is the secret weapon of any project with which he's involved -- even the ones where he's the director and star. He's a guy who is capable of putting over any material and selling even the most non-existent joke. Bateman is so good he made me care about that sperm-swapping "comedy" The Switch. He sells Guy Trilby convincingly because Bateman is incapable of playing characters who aren't very smart, even when they are behaving stupidly (Arrested Development), and because the way that he delivers the insults to the kids he's attempting to psyche out lets us in on the fact that he doesn't mean it. His dickish qualities are clearly a defense -- a way of keeping people at arm's length. With the kids, we know he just doesn't have the patience. With the adults, it's apparent that it's a little more genuine. The children are innocent. The adults have chosen to be assholes, so they've got it coming.

What's absent from much of the movie's marketing -- even its premise, which sounds like a high-concept Jim Carrey comedy -- is that there is a lot of anger underneath. That's the stuff that works best in Bad Words, perhaps because it's tapping into something honest. While the adult-swears-at-kids stuff feels like a construct, the hostility it masks comes from a real place. It's also what's best about Bateman's performance; he's great at being a smartass, but always hides something darker behind his eyes. Guy is playing a long game, and it's one that goes back much further than the start of the film. 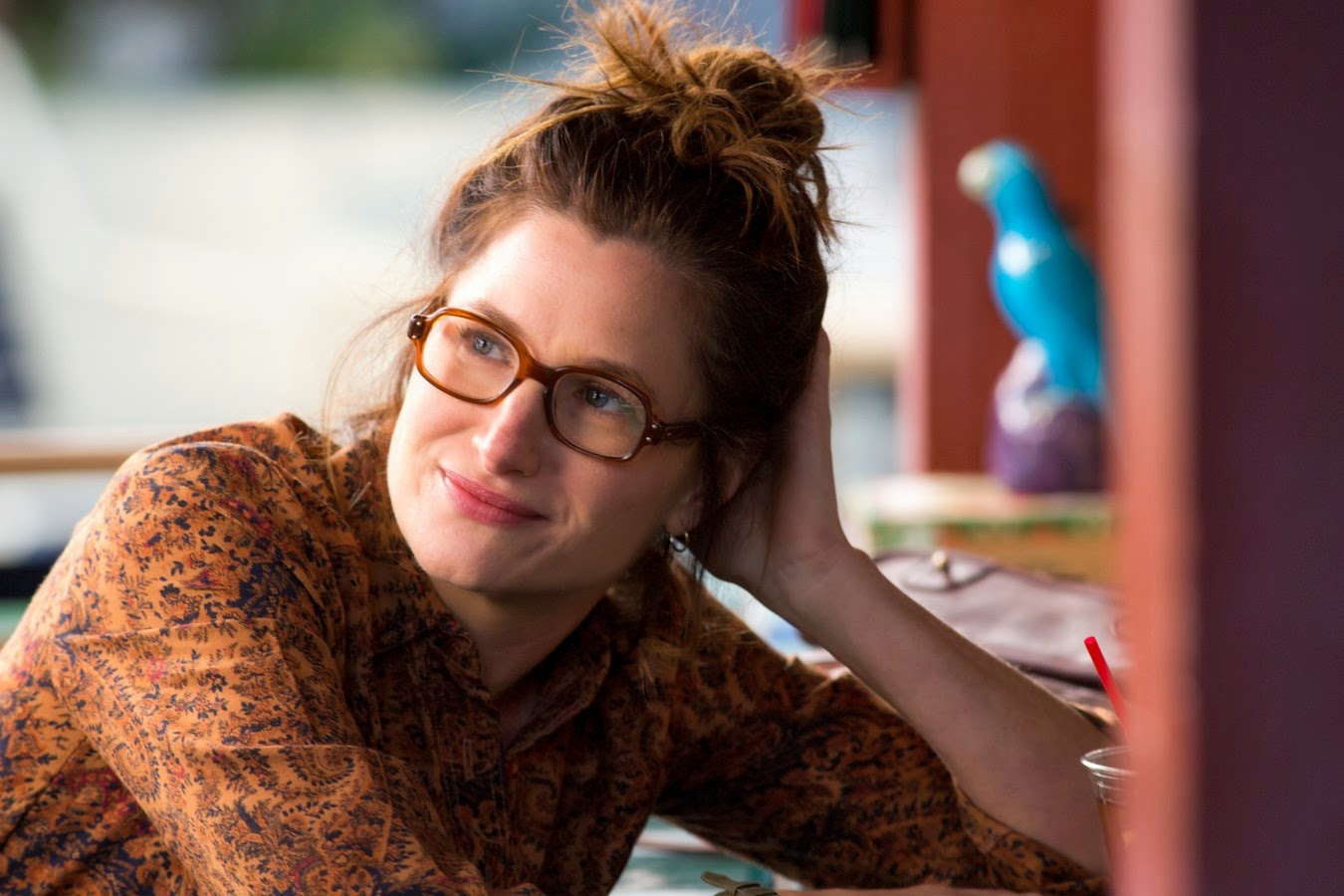 The rest of the cast is good, too, suggesting Bateman has both a good eye and a love for character actors. The perpetually underrated Kathryn Hahn always delivers as the journalist who is sponsoring Guy in exchange for a story. Allison Janney is good in everything, as is Phillip Baker Hall (further evident of the PTA influence). Even the small parts have great character actors, including Ben Falcone, Beth Grant and Steve Witting. The real find of the movie is Rohan Chand as Guy's young friend/competitor Chaitanya -- his expressive eyes and adorable smile are impossible to resist, making him the rare child actor who isn't begging for your approval by being cute. He's just naturally that cute. He's sweet and genuine, too, while helps some of the rougher material go down. We don't worry that Guy is going to corrupt Chaitanya. He's too good to be corrupted. 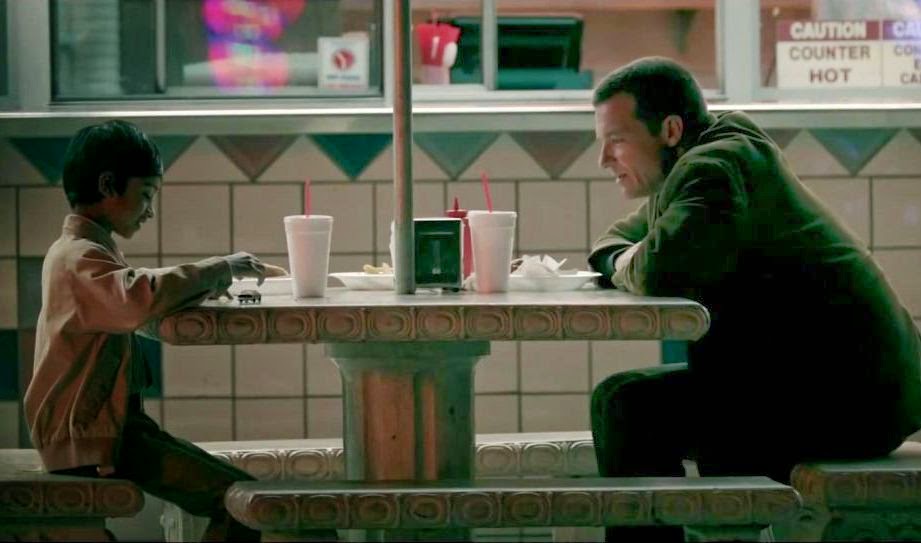 As actor-turned-director debuts go, Bad Words is decent. Bateman demonstrates a good understanding for technique, includes a couple show off-y moments, mostly balances a tricky tone and, most importantly, proves that he knows to surround himself with good people. The movie is good enough to suggest that Bateman is capable of making something better. Hopefully we won't have to wait too long to see what he does next.
Posted by Patrick Bromley at 7:40 AM