This week I’m saluting our pulp heroes and taking a deeper look at how they’ve changed from yesterday to today.

Nearly a year ago, I wrote a column about The Endless Franchise in which I wrestled with the conflict I felt over the modern glut of superhero films and eventually decided that we are living once again in the days of the Saturday serial. My point was that, while we aren’t quite getting a new chapter of Spider-Man each week, superhero movies come out with such regularity now that you no longer have to wait three years to see what happens next.

A timely example which I didn’t point to in that original column would be the character of Captain America. His first solo film was in 2011. He then appeared in The Avengers in 2012, made a cameo in Thor: The Dark World in 2013, and his latest adventure opens nationwide this weekend in 2014. Next year we’ll see him again in Avengers: Age of Ultron and there’s talk of finishing his trilogy in 2016. Again, while that isn’t the same weekly thrill provided by the Captain America serials of 1944, it is, nevertheless, a frequency that I don’t think we’ve seen in over half a century. The days of the Saturday Matinee Hero are back.

But in the months since I wrote that original piece, I’ve been thinking a lot more about my point and what, if anything, this return to serials means for us as movie fans and as a culture. I’m still not entirely okay with how thoroughly my childhood heroes are being exploited (even though that’s what they were created for) by the corporations that own them, but I want to be.

Something occurred to me recently as I was watching an old Audie Murphy movie (The Kansas Raiders from Universal, 1950). Audie Murphy was a young American who joined the army in 1941 when Pearl Harbor was bombed. During his years of service he became one of the most decorated soldiers in the entire U.S. military and, upon completion of his service, became an extremely popular Saturday Matinee Hero. He wrote a book about his war exploits called To Hell and Back and later starred in a film version of his own story. The character of Fredrick Zoller from Inglorious Basterds is pretty tightly based on Audie Murphy (there was an actual German sniper who killed a bunch of people, but QT has said the character is meant to recall the American soldier/actor).

Murphy starred in some war movies, but it was the western genre and the idolization of millions of kids and kids at heart that has cemented his place in Saturday Matinee Hero heaven. He played Billy the Kid and Jesse James and was the kind of hero both on and off the screen that kids in the 1950s dreamed about being. 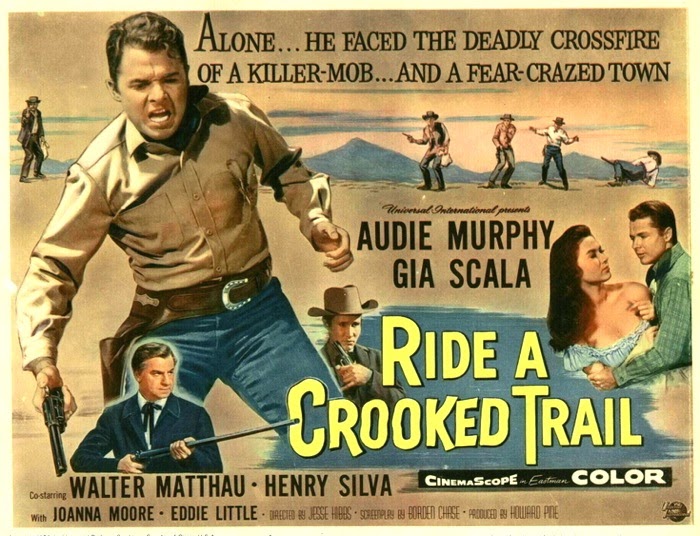 What occurred to me was that this whole superhero thing that we’re experiencing right now happened way back in the ‘50s with westerns. I’m not saying that’s all that the studios were making; there were plenty of other genres filled with stars who we know by one name, like Bogart, Cagney, Gable, Monroe, Dietrich, and Hepburn. But westerns were cheap and easy to crank out, and for several decades that’s exactly what Hollywood did. In the 1950s alone, hundreds upon hundreds of westerns were made. An entire generation, maybe even two generations, grew up watching their heroes save the day and ride off into the sunset. For a long time western movies were the most profitable and reliable genre in film. All ages went to see them and all ages appreciated them for different reasons.
But with the advent of color television and the increasing quality of network programming, Saturday Matinee Heroes moved to the small screen for a long time. Westerns declined, replaced with adventure shows like The Six Million Dollar Man. Comic book heroes like Wonder Woman, Spider-Man, and The Incredible Hulk captured the imaginations of audiences at home instead of on the big screen. Saturday Matinee Heroes still existed at the movies, but it would be decades before the culture shifted to where it is now.

Today superhero movies are doing the exact same thing that westerns did over 60 years ago. Things really got kicked off fourteen years ago with Bryan Singer’s first X-Men film. Now here we are, almost a decade and a half later, and Singer is about to drop another X-Men film in a summer filled with superhero fare. Most of the schedule for the past few years has been filled with superhero films. Go to the movies on a Saturday afternoon between the months of April and November and you will find a theater packed with both adults and children, both wearing t-shirts with their favorite comic book characters on them. 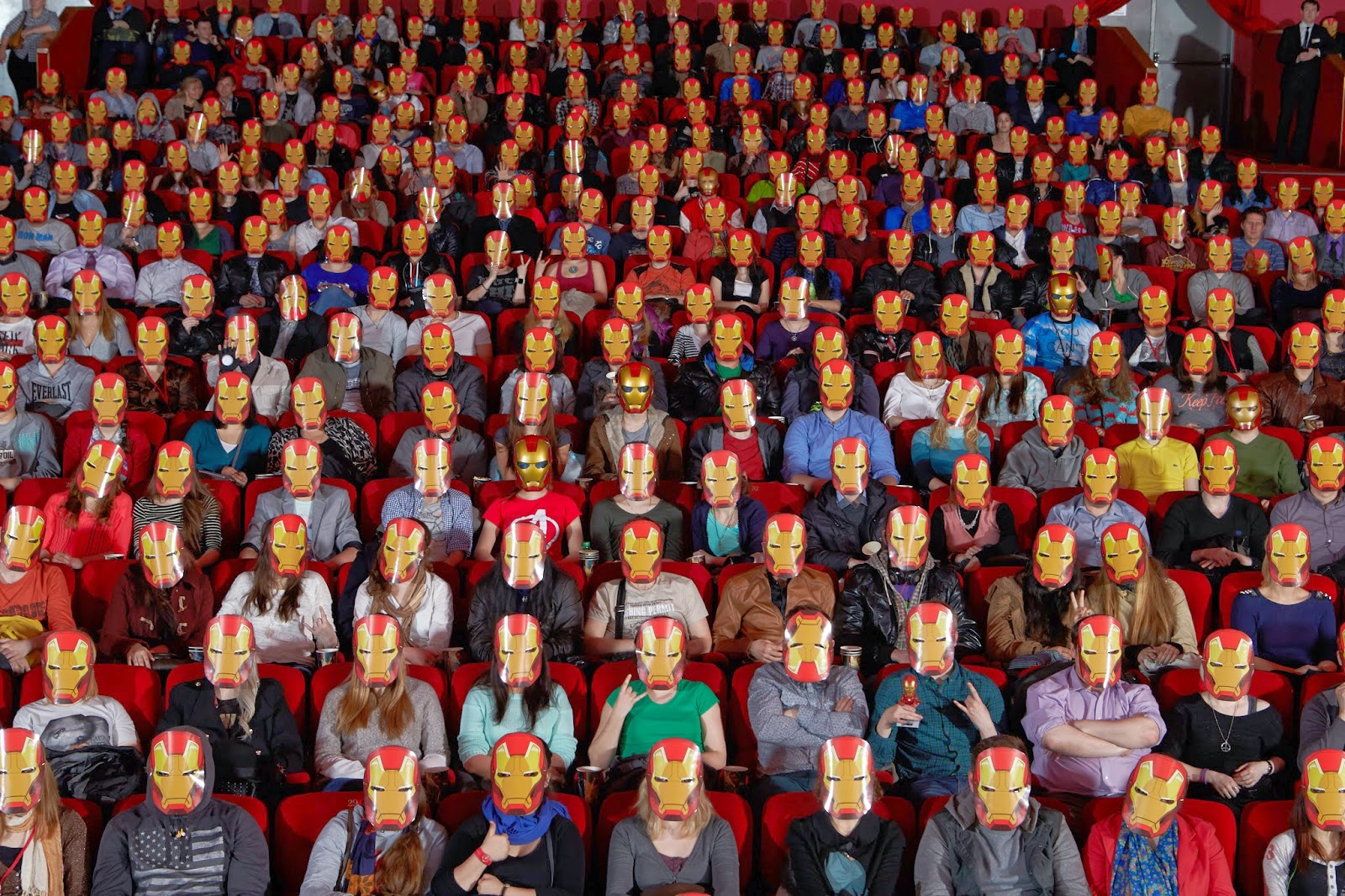 I honestly believe we haven’t seen anything like what we’re seeing now since the 1950s. Nothing has slowed down; stories and budgets have only gotten bigger. This superhero wave is a lot bigger than the western boom of the ‘40s and ‘50s I’m comparing it to because of the merchandising and tie-ins across all forms of media. It’s not the same world as it was then.

Which brings me to my second observation: in those 60-plus years, our heroes have changed. Oh boy, have they ever changed. I’m not naïve enough to say that the Saturday Matinee Heroes of the past featured good guys who always wore white and bad guys who wore black because even then there were shades of gray in those characters. The Audie Murphy movie I referenced saw him sticking to an ideal that no innocent people should ever be slaughtered, but that didn’t stop him from slaughtering the guilty.

But the stakes certainly seemed smaller in the past. Those films were about honor or revenge; the lives of a few dozen, maybe even a few hundred, had been changed for the better when the good guys rode into the sunset. This was a deliberate avoidance of the ugliness that existed in the real world, often relying on metaphor and allegory to tackle big issues. These ‘40s and ‘50s Saturday Matinee Heroes existed in a post-World War II environment. The audience had seen global war and seen the devastation of entire cities.

I’m reminded of a news reel from 1937 that plays during a “Warner Night at the Movies” on the DVD for the Humphrey Bogart film San Quentin. After a trailer of the boxing movie Kid Gallahad and before a Porky Pig cartoon, a roughly two-minute long newsreel details bombings in China and devastation during the Spanish Civil War by showing bloody babies and the corpses of children lying among the rubble of collapsed buildings.

So the smaller stakes of the 1950s pulp cinema seems to have been a deliberate choice: “We’ve seen the ugliness of war and we’re choosing to tell more stylized, artistically creative stories that are informed by all we’ve seen without showing destruction on a massive scale.” It’s interesting to me that Audie Murphy, who had fought true evil and killed other soldiers in hand to hand combat on a global battleground, spent most of his film career fighting corrupted officials and cattle barons. It was a choice not to go there.

But what is the one consistent battleground of just about every single superhero movie in the last few years? Either the entire country or the entire planet hangs in the balance about 23 times each summer. As much as I’ve become absolutely exhausted by this trend, this is what people want to see. This is our collective fear, and this is how we address it. This is the world we live in, and so our Saturday Matinee Heroes have changed from defending the few to now defending the world. 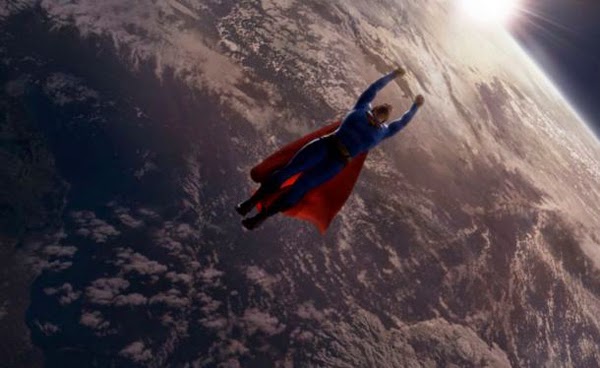 It’s interesting to me that in the years since 9/11, cinema has become even darker and more violent. Patrick talks all the time on the podcast about how hundreds and thousands of people are killed in movies with a PG-13 rating now (Man of Steel, World War Z). Yet, most of the time, these are the movies with the action figure tie-ins and the Burger King kid’s meals. We don’t trust anyone anymore. Look at the portrayal of Superman in Man of Steel: the character is certainly not beloved and cherished at the end of the movie. If anything he’s regarded with suspicious unease and tolerance…for now. It’s a reflection of us.

So our Saturday Matinee Heroes have changed. Gone is the hero with two six-guns and a square jaw. Now our heroes are built like brick houses, six-foot two and covered with muscles on top of muscles. They have superpowers and regardless of what the movies sometimes lead us to believe, they never die. They don’t fight for truth, justice, and the American way, they fight for the entire globe as one invader after another tries to wipe us off the galactic map. Cinematic Earth is no stranger to threats, but it’s in peril constantly now.

Sidenote: this is why, I believe, last year’s The Lone Ranger is so polarizing. The title character is a buffoon and Tonto is crazy. Kids (and to a certain extent, myself as well) see the movie as a rousing western adventure on par with the Saturday Matinee Heroes of yesteryear where the good guy wears a white hat. Adults get the cynical chewy center and the message that there aren’t really any heroes and we’re all pretty screwed. I think I’d rather it were simply the more innocent fun that kids see it as. It’s worth pointing out, though, that the heroes DO still save the day and evil is vanquished. I see a lot of the metaphors in The Lone Ranger that I see in so many classic westerns, but there’s a few in there that I can’t figure out. I don’t think they point to good things, though. Gore Verbinski and Johnny Depp don’t seem to think we’re headed in a good direction.

Really, you guys, the point I’m trying to make through all of this is that, though our heroes change, THANK GOD we have them. I’ll try to remind myself of this mid-July when I inevitably go numb from all the CGI destruction and start hating humanity. I believe we live in a darker, more pessimistic world than any other in the time since moving pictures were invented, yet we still have our heroes of the silver screen. We still need them. They’ve changed with us; always have and always will. From Audie Murphy as Jesse James to Chris Evans as Captain America, we’ll always have 40 foot tall saviors. No matter how scary the world outside is, we’ll always know that we can sit inside a darkened theater with other people just like us and look up at the screen.

And our Saturday Matinee Heroes will always protect us from the world outside.
Posted by Patrick Bromley at 11:58 AM