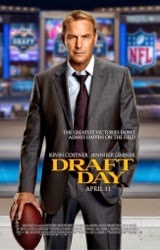 The less you know about sports the more you will probably enjoy Draft Day.

There’s nothing wrong with that. I can be entertained and involved when I watch Moneyball on cable, while I know that much of what’s discussed is bullshit amplified for dramatic effect. Draft Day is the same thing; aside from that, it works. Neither movie is a documentary, nor would a coloring-inside-the-lines approach be to the benefit of either. If you can get past that, I am recommending Draft Day. It met my mildly enthusiastic expectations.

I bring up the comparison to Moneyball because Draft Day owes a great deal to that earlier baseball movie. Without the financial and critical success of the former, the latter wouldn’t be playing in theaters; more importantly, both movies are character studies about the doubted general manager of a sports team strategically getting the upper-hand. It’s a fun arc to see play out in any case, especially when the disbelieved messiah is played by Kevin Costner. 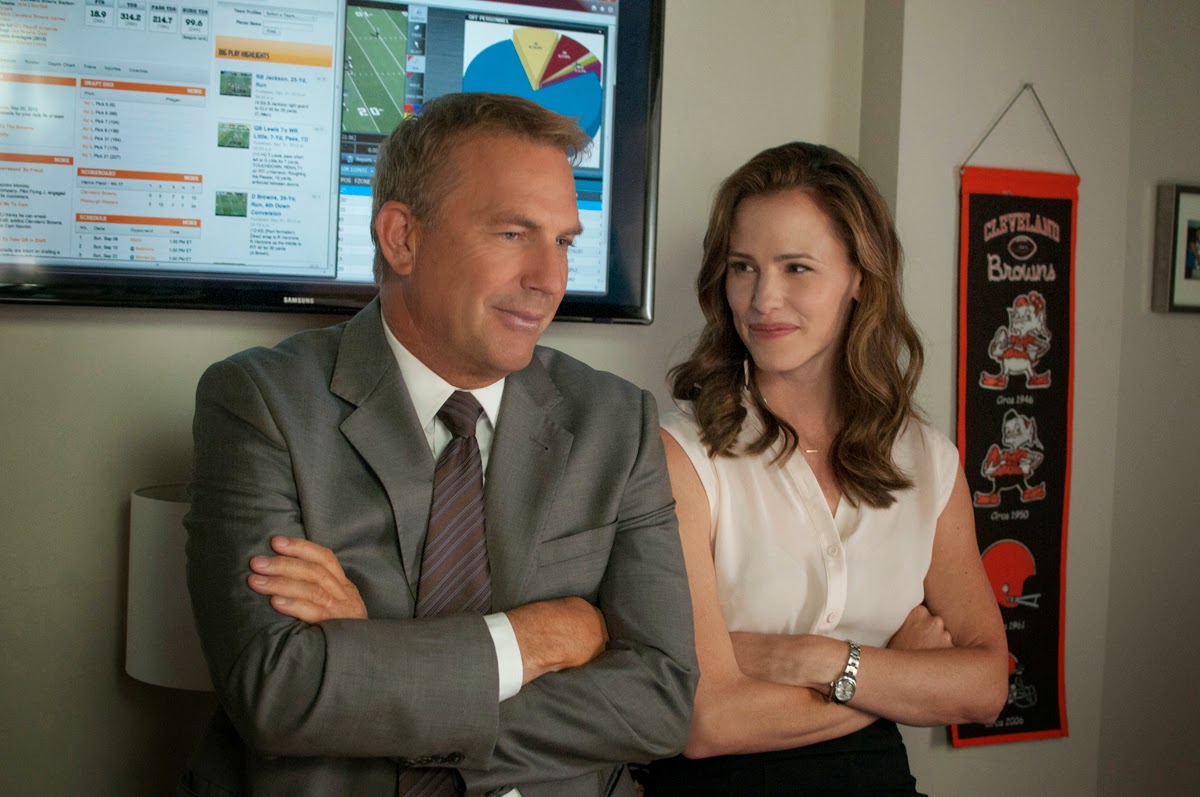 There is something so appealing about Costner's acting. It's his grumpy sincerity. He wants to play by the rules, follow the American Dream, etc. but is defiant against those rules when he no longer has the advantage. And when he doesn’t have the advantage, he’s an amusing jerk. For example, there is a scene in Draft Day where Costner’s character enters the “war room” and sees three members of his team shooting the breeze, checking out a faux-dirty web site and speculating on how many women a star quarterback sleeps with in a week. Costner’s response is that he’s a few seconds away from beating the shit out of all three of them, because a) they’re wasting his time and b) he doesn’t suffer fools. The way that Costner grumpily doesn’t put up with bullshit is an actable choice and he does it in a charismatic, engaged way, unlike Harrison Ford (most famously known from playing Jock Goddard in Paranoia).  Costner almost willfully tries to make his characters into dicks and somehow he becomes more likable because of that. I want to be his friend is what I’m trying to say. 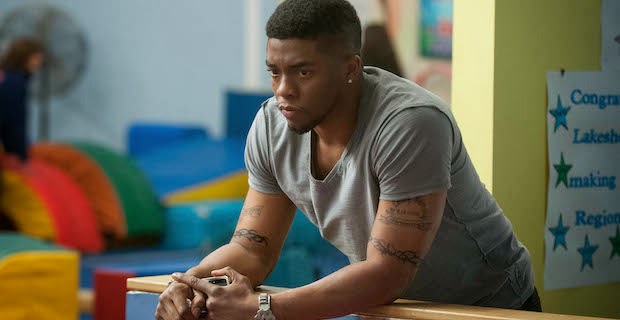 Aside from Costner’s performance, only one other actor shines and that’s Jackie Robinson/Chadwick Boseman/James Brown (42, the upcoming Get On Up) who is appealing and gets a big emotional scene near the end of the movie that he nails. It’s a sweet moment of pure joy. The rest of the performances from the likes of Jennifer Garner, Denis Leary, Ellen Burstyn, Sean Combs and Tom Welling are functional but professional. One of my favorite actors, Pat Healy, is in one scene and has to play an idiot. That was disappointing because he’s such an interesting actor – see Cheap Thrills for some great Pat Healy. Rosanna Arquette is also in the movie for two minutes and looks prrrrowwwwlll, which is animal for boner. She doesn’t have much of a part to play is what I mean. 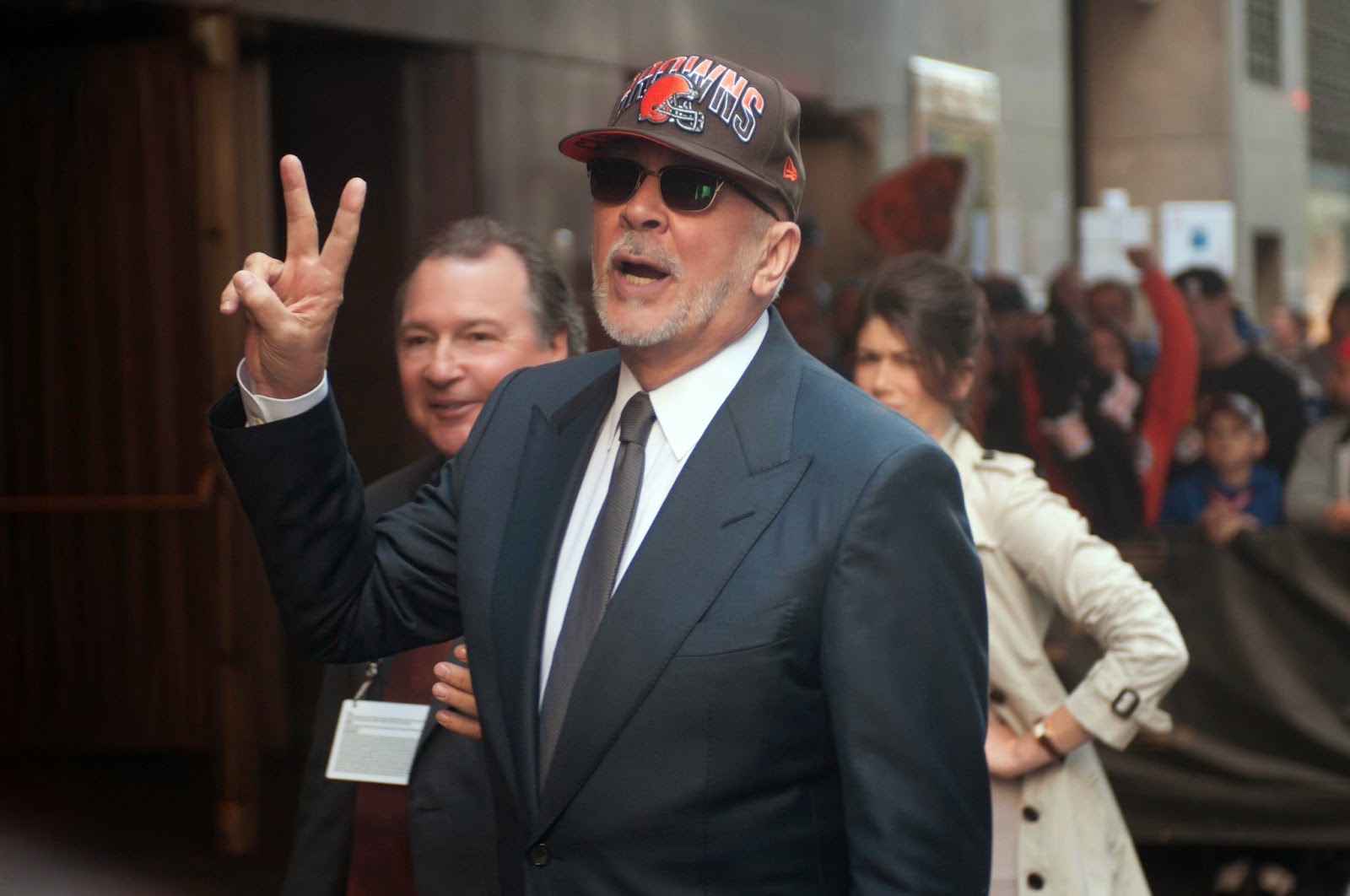 Does the movie have flaws? Oh, you bet it does. My favorite slap-your-head dumb scene is when Frank Langella (who plays the team owner) invites Costner to a closed water park and gives the most heavy-handed analogy to “making a big splash” imaginable. If that weren’t enough, he explicitly states what the analogy is in case it wasn’t clear enough. Actually, Frank Langella is kind of bad in the movie. Much of that has to do with the writing of his character, though. The movie also has a good deal of logical imperfections and dealings where bluffs aren’t called/things are left to major chance but it never takes away from being swept up in the proceedings, especially when the draft is underway during the last 30 minutes of the movie.

Draft Day is an entertaining trip to the movies. It’s not directed with much flair (by Ivan Reitman**, whose big move is blending split-screens together) nor is it always respectful of the audience’s intelligence, but it is the type of movie you will watch eight times when it is on cable in a few months. Like Moneyball, it will probably improve with familiarity.

*Note: There’s a line in the movie where Costner says (I’m paraphrasing) “You were eating your fucking pancakes” and it’s hilarious. It should have been the tagline on the poster.

**Draft Day is better than Reitman’s last few movies (No Strings Attached, My Super Ex-Girlfriend, Evolution) but not one of his best.
Posted by Patrick Bromley at 12:24 PM