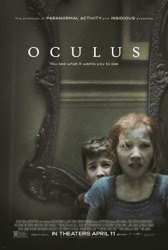 Close only counts in horseshoes and haunted mirrors.

For 95% of its running time, the new horror movie Oculus is one of the best Stephen King stories that Stephen King never wrote. It's all there: the childhood trauma, the vow to come back and finish business as an adult, psychotic dad, ordinary object personified as "evil." Then the last couple of minutes piss most of that away with a denouement that's neither clever nor inspired (I'm reminded of M. Night Shyamalan's The Happening, in which we're told "It's the wind, it's the wind" over and over only to have the big reveal to be "It's the wind" -- not that Oculus deserves to be mentioned in the same sentence as The Happening) and which doesn't so much betray what has come before as much as our investment in it.

The movie tells two parallel stories: in 2002, a couple (Rory Cochrane and Katee Sackhoff) move into a new house and buy some new furniture, including a large antique mirror that begins to have an unusual effect on daddy. In 2013, the kids (now played by Karen Gillan and Brenton Thwaites) return to their childhood home to finish what they started. Older sister Kaylie has a well organized plan to destroy the mirror and prove that it was responsible for the death of her parents -- her dad wasn't crazy. Younger brother Tim is less willing to buy into the "evil mirror" theory, but that's because he's just spent a decade in a psychiatric hospital for shooting and killing his dad as a kid and is feeling a little protective of his grip on reality. 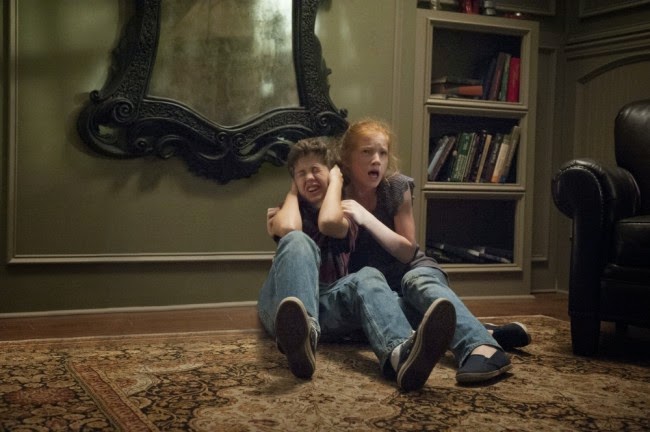 The present-day scenes of Oculus unfold essentially in real time as Kaylie maps out all of the steps she's taken to ensure she's able to prove that the mirror is evil without falling under its spell -- there are alarms set to go off every 30 minutes reminding her to eat (past owners have starved themselves to death), houseplants set up around the perimeter to test how far its influence reaches (plants die around it), multiple cameras set up to capture every moment and, of course, a fail safe weapon set up to destroy the mirror. All of this is reasonably compelling, in particular the way Kaylie talks about the mirror like it's an evil person (King's Christine comes to mind). It gets even better when the mirror starts to fight back, because writer/director/editor Mike Flanagan has a knack for staging visuals and moments that feel just "off" enough to be unsettling. We can never trust what we're seeing.

This material is broken up by flashbacks that fill in the gaps of what happened to Tim and Kaylee as kids. Here's the problem with this approach, and ultimately the biggest problem with Oculus: it offers no surprises. That doesn't mean it traffics too much in the familiar. It's made well enough to overcome any of the cliches it might embrace. The problem is that the flashbacks only show us exactly what has already been explained in the dialogue -- the equivalent of someone telling you a 90 second story and then spending 45 minutes acting the same story out for you. For it to work, what we see playing out would have to differ in some way from how the story is set up; it's in those differences where the real story of Oculus -- what the movie is actually about -- would be discovered. 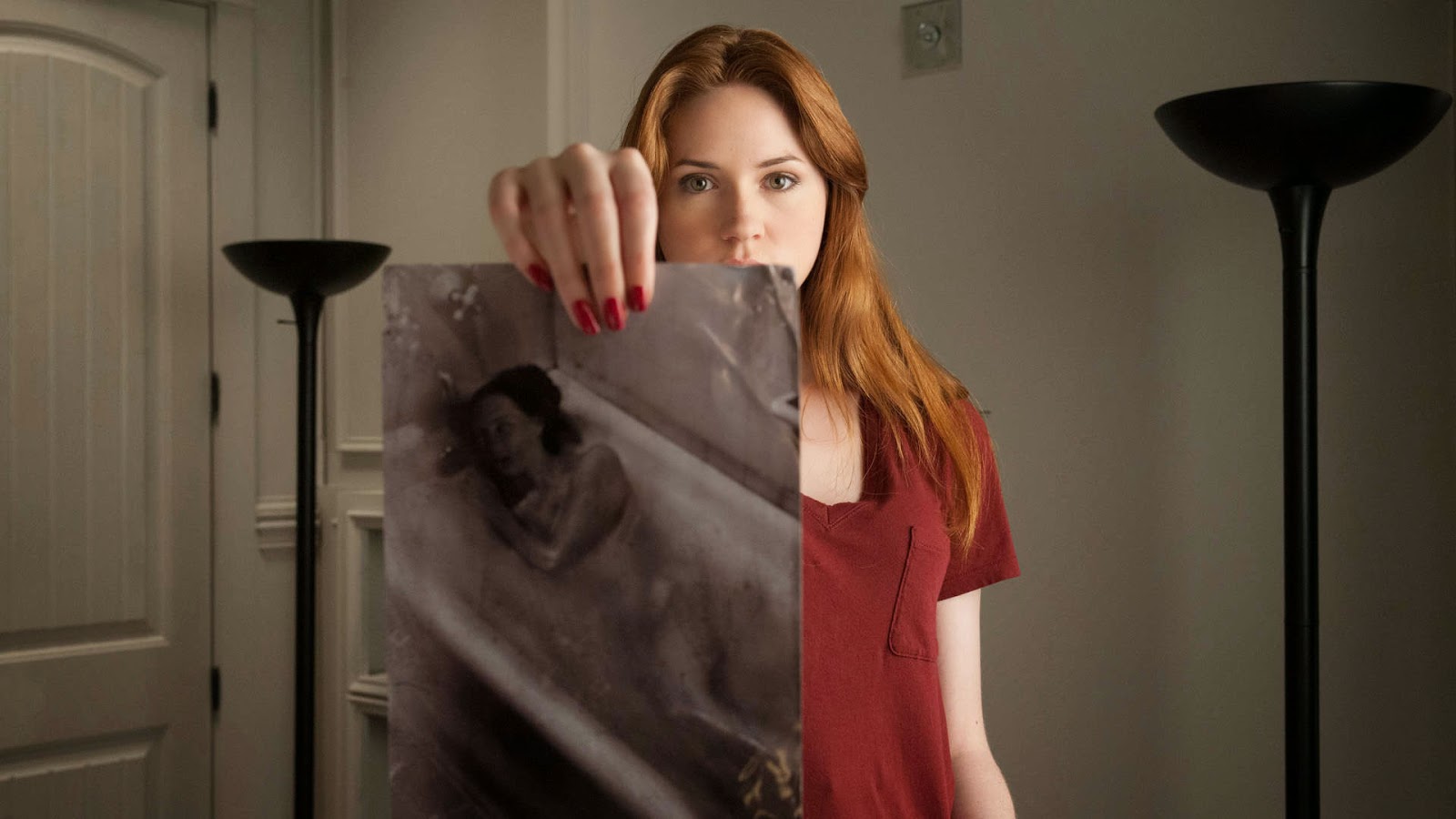 The last few minutes of the film suffer from the same problem. Without getting into spoilers, I'll just say that Oculus is structured, shot and edited like there is a twist to the film. There isn't, but there also isn't any kind of dread logic in its absence. There is just one more thing that happens, and it is neither surprising nor satisfying. I won't say that the ending undoes all the good that came before, but a movie that fails to stick the landing can never be truly successful. Not to invoke the name of Stephen King again (though he's clearly a big influence), but he, too, takes a lot of shit for his endings. Sometimes it's deserved. But even the endings of his that fail find a way to make humanity matter -- the left-field mysticism that often comes off as hokey is always rooted in King's belief in humanity. This, too, is where Oculus falls short. It resolves by suggesting its characters could be almost anyone instead of specifically these people.

So can a movie be considered successful if it offers a lot of good setup but blows the execution? In the case of Oculus, it's more than just a bad scene or two -- it's that the chosen ending fails to give meaning to the overall movie. Still, I see enough horror films that don't get nearly as much right as much as this one does -- especially studio horror (this one is being released by Blumhouse and WWE Studios, making it WWE's best release to date), which is most often messy enough that a blown ending is the least of its concerns. For most of its running time, Oculus is made with real confidence. It's creepy and involving and features one very good performance by Katee Sackhoff who, as they say, commits to the bit. There are plenty of good reasons to see it. There's just not enough to make it all stick. 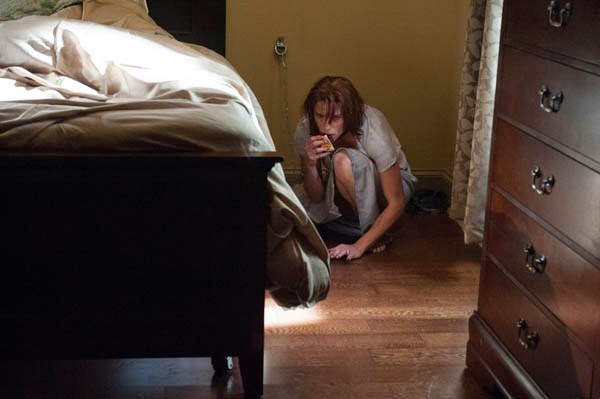 Apparently, the film has been edited since it first debuted to some good press at the Toronto International Film Festival last year. Maybe those cuts damaged the finale. Maybe they made it a tighter, better movie overall. I won't know until it gets released on Blu-ray, and that's only if both cuts are included.

Oculus manages to be that rare pleasant surprise that's also frustratingly disappointing. It has the chance to be something genuinely special in its reach but lets it slip from its fingers at the last possible moment. A bad ending can't kill a movie, but a bad ending that recasts the entire movie as something lesser can certainly damage it. I spent most of Oculus thinking I was watching one film, only to learn in the end that I was mistaken. I like the movie I thought I was watching better.

* The big selling point of Oculus is that it stars Amy Pond from Doctor Who and Starbuck from Battlestar Galactica. Fuck the Marvel movies; this is the fanboy event of 2014. Sadly, they never share any scenes together. And no one from Star Trek shows up. Talk about a missed opportunity. Posted by Patrick Bromley at 7:40 AM