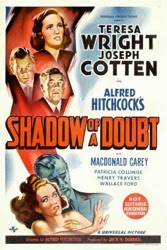 Alfred Hitchcock was the greatest film director of the twentieth century. These thirteen essential Hitchcock films prove why. 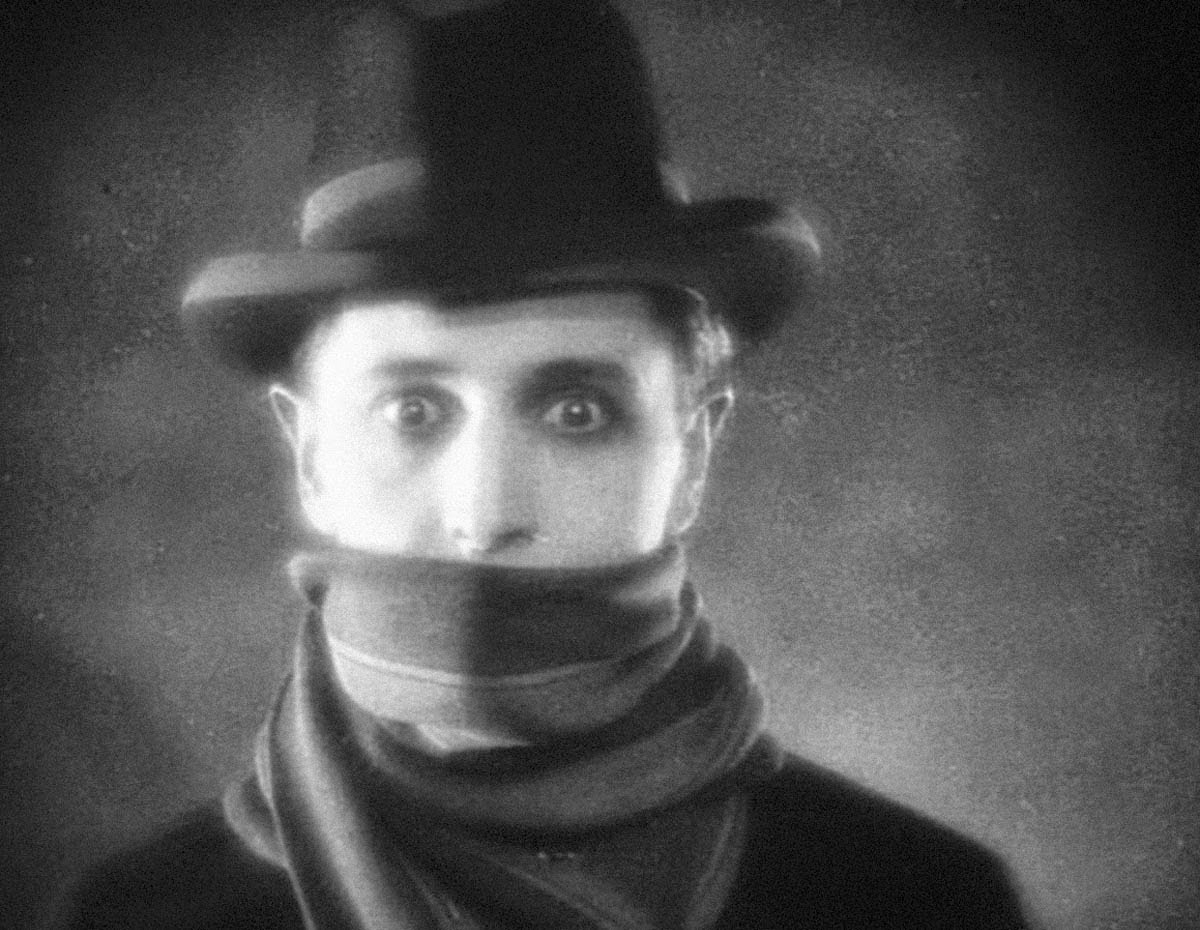 1. The Lodger: A Story of the London Fog (1927) I was lucky enough to catch a theatrical screening of this a few months ago at Chicago’s Music Box Theater (the happiest place on Earth.) The screening featured live organ accompaniment to boot. I was surprised at how well the film still plays to a modern audience and impressed by how fully developed Hitchcock's talent already was at this early stage in his career (he was only 28 when the film was released.) The film has many terrific moments of suspense and twists and turns in the plot, as we might expect. I was not familiar with the work of Ivor Novello, a 1920s matinee idol, before I saw The Lodger, but his performance here is delightful and remarkably contemporary; he definitely succeeds in breaking out of his "romantic leading man" mold.

2. The 39 Steps (1935) This film is a personal favorite, largely due to the charming and charismatic performance of Robert Donat in the lead. The 39 Steps is the grandfather of all the Hitchcock films that would later feature "the innocent man accused" trope: Saboteur, Strangers on a Train, and The Wrong Man all owe a debt of gratitude to this earlier film. The 39 Steps also features delightful supporting performances and a great sequence where the hero and heroine are handcuffed to each other for what seems a really long time. "Mr. Memory" is a unique and sad character.

3. The Lady Vanishes (1938) A film very much in the spirit of The 39 Steps, with Michael Redgrave here playing the role of the innocent man who is pulled against his will into mystery and intrigue. These films would come to typify Hitchcock's "lighter" films like To Catch A Thief, Rear Window, and North By Northwest. The film also boasts career-best performances by Margaret Lockwood and Dame May Whitty. 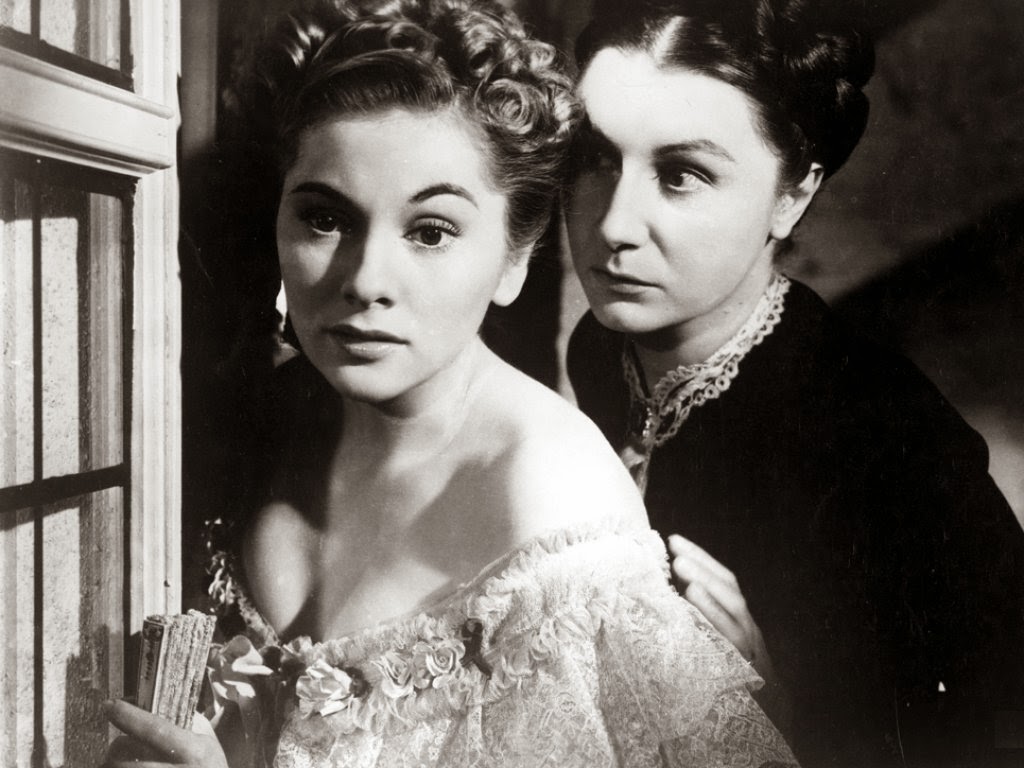 4. Rebecca (1940) Hitchcock's American debut, and we can almost spot his signature style through the opaque straightjacket of producer David O. Selznick's famous micromanagement. Laurence Olivier and Joan Fontaine star in this adaptation of Daphne Du Maurier's famous novel. This film makes me wonder why Hitchcock didn't attempt more gothic romances or literary adaptations later in his career. Du Maurier actually wrote the short story upon which The Birds was later based based. Rebecca garnered Hitchcock the first of his five Oscar nominations for best director; he was destined never to win. 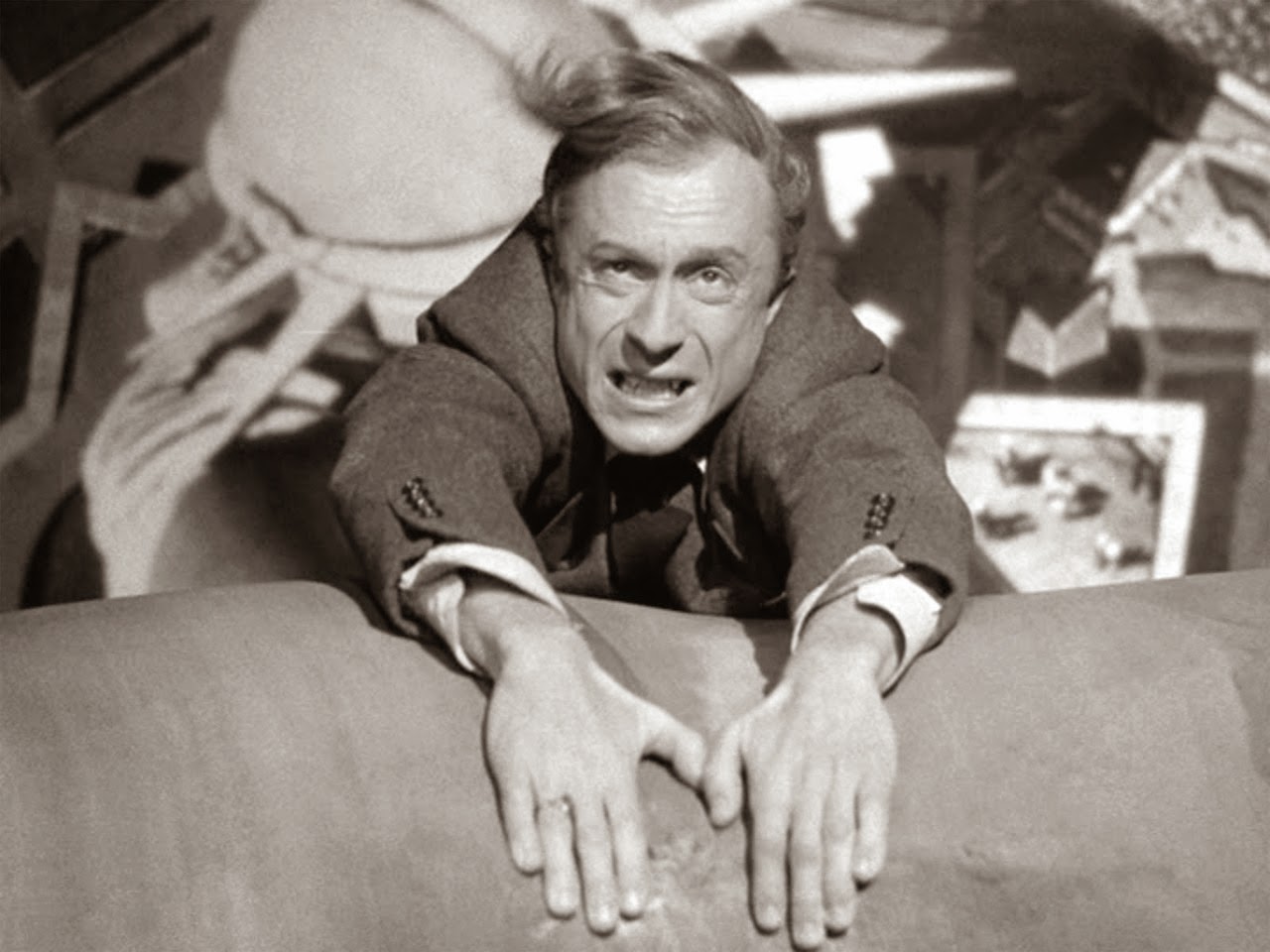 5. Saboteur (1942) The first film in Hitchcock's "American Landmark Fetish" trilogy (which also includes North by Northwest and Vertigo), today Saboteur is most remembered for its ambitious climactic sequence that sees Norman Lloyd hanging from the Statue of Liberty. Robert Cummings proves to be a hero very much in the mold of later Hitchcock heroes James Stewart and Cary Grant.
This film also begins the minor trope of Hitchcock's villains being allowed to say audacious things for the time, precisely because they are the villains. Imagine the following being spoken in an American film less than a year after Pearl Harbor:


Charles Tobin (The Villain)
You're one of the ardent believers - a good American. Oh, there are millions like you, people who play along, without asking questions. I hate to use the word stupid, but it seems to be the only one that applies—the great masses, the moron millions. Well, there are a few of us unwilling to troop along... a few of us who are clever enough to see that there's much more to be done than just live small, complacent lives, a few of us in America who desire a more profitable type of government. When you think about it, Mr. Kane, the competence of totalitarian nations is much higher than ours. They get things done.

6. Shadow of a Doubt (1943) Hitchcock's favorite of all of his own films (mine too!), this film asks the question, "What if we took an idyllic small town of the type found in Thornton Wilder's Our Town (Wilder collaborated on the screenplay for Shadow of a Doubt) and plopped a serial killer down right into the middle of it? The Newton family loves their dear Uncle Charlie, who is coming for a rare visit; they do not know what Uncle Charlie does in his "other life" in New York. Again, Hitchcock gives the bad guy the best dialogue:


Uncle Charlie
The cities are full of women, middle-aged widows: husbands dead—husbands who've spent their lives making fortunes, working and working. Then they die and leave their money to their wives, their silly wives. And what do the wives do, these useless women? You see them in the hotels, the best hotels, every day by the thousands, drinking the money, eating the money, losing the money at bridge, playing all day and all night, smelling of money, proud of their jewelry but of nothing else—horrible, faded, fat, greedy women... Are they human
or are they fat, wheezing animals, hmmm? And what happens to animals
when they get too fat and too old?

7. Strangers on a Train (1951) A favorite of film study classes nationwide for its use of motif and symbolic imagery, I feel that this Hitchcock film doesn't get the praise it deserves for its performances. Sure, Farley Granger is a stiff as tennis pro Guy Haines, but the film is completely stolen from him by Robert Walker, playing the most charming sociopath in film history. His stalking of Granger's wife through an amusement park is a tour-de-force, as is the climactic sequence aboard a runaway carousel. Strangers was later the inspiration for Throw Momma From The Train.

8. Rear Window (1954) All of Hitchcock's hang-ups and concerns about voyeurism get rolled up into one slick and entertaining package. James Stewart plays a professional photographer sidelined by a broken leg. To pass the time in his apartment, he begins to use his camera lenses to spy on his neighbors. One of them might be up to no good. Thelma Ritter, as Stewart's nurse, is cute as a button and almost steals the picture from her more famous co-stars. Featuring an impressively detailed, mammoth set, one of the last performances before Grace Kelly left the movie business to become Princess of Monaco, and the first recorded use of flashbulbs as lethal weapons.

9. To Catch a Thief (1955) Pure fun and escapism, Hitchcock style, this is one of the many films from Hollywood's second golden age that, thanks to location work, cinematography, and Technicolor, are like taking a very expensive vacation without leaving your own neighborhood theater. The film is such a delicate gem, I don't even remember the plot, which is apparently something about jewel thieves. All I remember are Cary Grant and Grace Kelly motoring around the French Riviera, falling in love and being chased across fancy roofs. Hitchcock knew that sometimes that's enough. 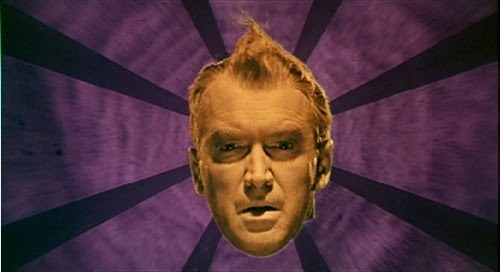 10. Vertigo (1958) Though misunderstood and disliked during its original release, Vertigo has come to be regarded as Hitchcock's most personal film, and even knocked Citizen Kane out of the top slot on the most recent Sight & Sound Best Movies poll. The Robert Harris/James Katz restoration of the film in 1996 probably had a lot to do with the film's critical reappraisal. James Stewart is hired to tail beautiful blonde Kim Novak, who eventually commits suicide. Later Stewart meets a woman who looks just like her and tries to remake her in the image of the blonde that got away. Creepy in every possible way, Vertigo also features one of the first "zoom in/dolly outs" in a narrative film!

11. North By Northwest (1959) The quintessence of 1950s Hollywood popular film, all of Hitchcock's experiences combine in this, the best of his "Hollywood Pure Escapist Fantasy" films. Some very bad men mistake Cary Grant for a spy. Dangerous and romantic hi-jinx then follow. Featuring the now famous cornfield/crop duster chase sequence, a most suave villain courtesy of the incomparable James Mason, and a climax involving our heroes climbing down the faces on Mount Rushmore. Mel Brooks wanted to parody this sequence in his Hitchcock homage High Anxiety; he said he wanted to emerge from Washington's nose wearing a green jumpsuit. The scene was never filmed. 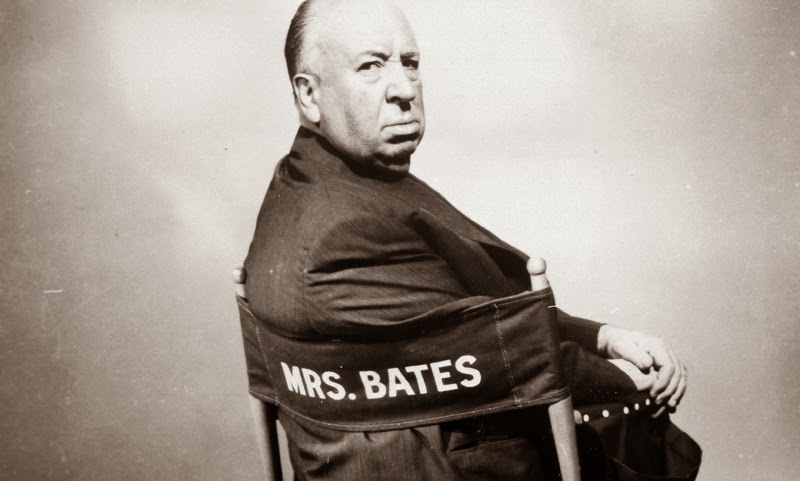 12. Psycho (1960) The apotheosis of Hitchcock's career and one of the ten best horror films ever made, it features what is arguably the single best performance by an actor in a horror film ever. Anthony Perkins was just so damn good playing Norman Bates that that role is all people ever wanted him to play again. Setting aside the knife murders, which are the grand set pieces of the film, Psycho has a lot of realistic and disturbing things to say about loneliness and want—far more to say about those subjects than most other American films of that time. Psycho has been endlessly analyzed and written about; the two best Psycho books are Stephen Rebello's Alfred Hitchcock and the Making of Psycho and star Janet Leigh's own memoir, Psycho: Behind The Scenes of a Classic Thriller. 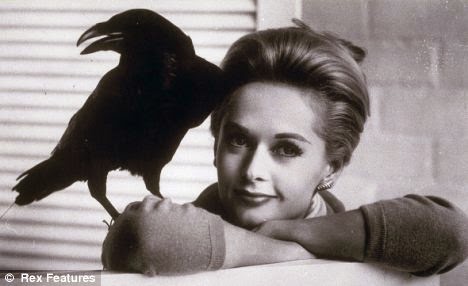 13. The Birds (1963) I would like to think that some of the sordid details regarding the making of this film are exaggeration and misremembering; this film is so rich that I hate to see its reputation tarnished by Hitchcock's behavior during its production. Tippi Hedren (among others) wrote that Hitch was in love with her, forced the issue, and ruined her career when she would not comply with his wishes. Ironically, The Birds has a lot to say about the power of female sexuality and our society's inability to come to terms with it. As I have detailed in a previous column, outdated special effects and hipster douche-baggery have conspired to date the film; audience members laughing merrily at the sight of small children being attacked and injured all but ruined my most recent screening.

Unfortunately, as detailed in Donald Spoto's The Dark Side Of Genius, either the great success of Psycho and The Birds, or Hitch's advancing age, conspired to effectively end his career. Psycho was impossible to "top," and the films Hitch directed after 1960 define a mixed bag of diminishing returns. Recently, Quentin Tarantino referenced this phenomenon (which is certainly not unique to Hitchcock's career) when he said that he plans to retire soon, so his career will not be characterized by what is, perhaps inevitably, an end-of-career slump.

I think this is a little reductive; Hitchcock made so many damn masterpieces, I think we can all excuse the last few that were just plain good. Still, Hitchcock was in preproduction for one more film (I've read the script; it's called The Short Night) but died before filming actually started and it was cancelled. Maybe THAT script could serve as the basis for both Tarantino and Hitchcock's last film. Can you imagine that? I would look forward to seeing that movie. 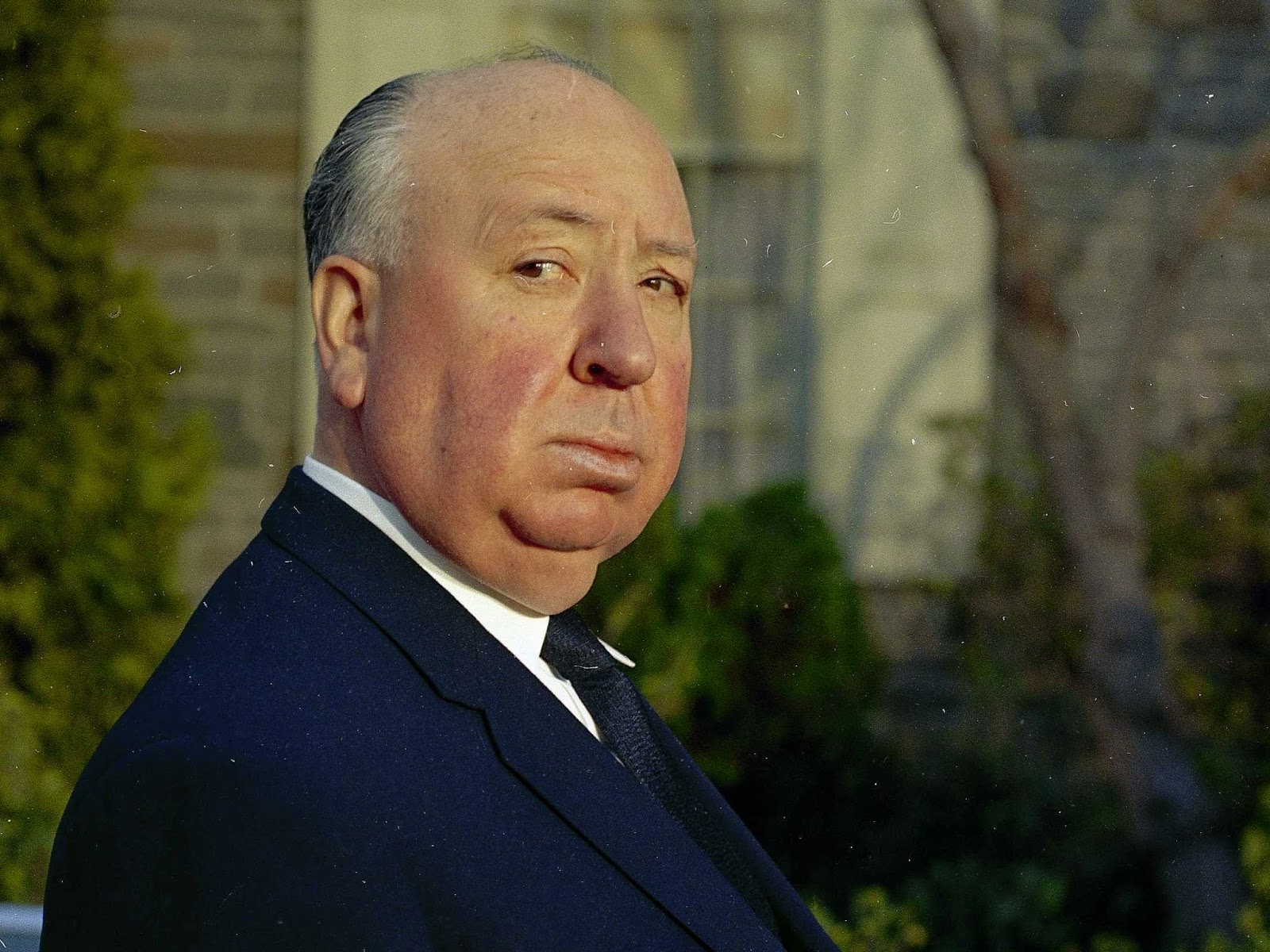