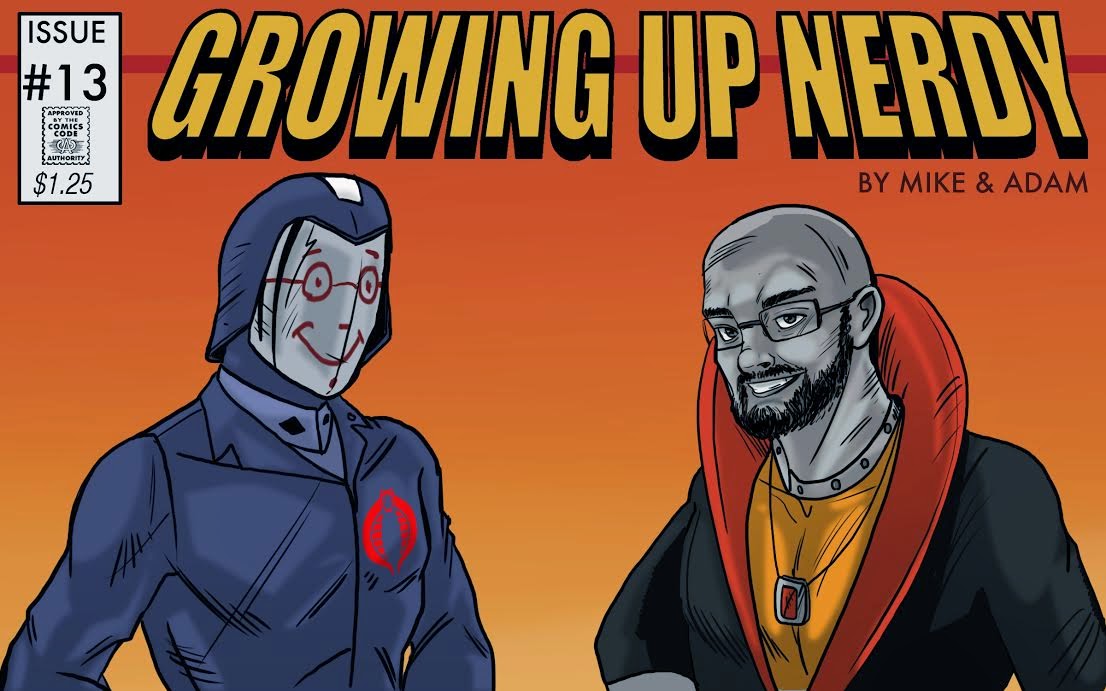 These nerdy boys are so nerdy with their toys and their settling age-old debates.

Marvel, DC. DC, Marvel. It seems like no one can agree. I find myself loving both of them. Why do some people love DC more than Marvel or the reverse?

-Gordon in Dallas Mike: Adam is the man to answer this question, because Adam actually has an answer. I, however, don’t have an allegiance. I like both Marvel AND DC equally. Well, maybe that’s not entirely true. Right now I’m digging on Marvel books more than DC, but that can change next week. There have been periods in my life when I read mostly DC books. For me it’s cyclical.

I think I tend to lean one way or the other for two main reasons. The first is simply where is the best writing? I’m drawn to story, so I’ll gravitate towards the strongest creative teams. Sometimes DC is kicking all sorts of ass with their writers and artists, and sometimes Marvel takes over.

The second factor for me in choosing which company I’m going to give my $3.99 is simply the kind of mood I’m in. Let me explain: I view DC and Marvel very differently from one another. In my mind, DC is darker than Marvel in both aesthetic and tone. Some days I want a book that will read like a horror story, so I’ll pick up Batman or a Vertigo title. Other days, I want to smile throughout a comic so I’ll read Doop or Spider-Man. Please understand that I’m not implying that DC is more “mature” than Marvel. I just think they’re interested in telling different kinds of stories. And that’s not to say Marvel can’t get dark ("Demon in a Bottle") or DC can’t be fun (Young Justice).

For me, history also plays a role in how I view the two companies. I look at DC in a romantic way, the way I think of baseball. Sure, the players of today may be stronger, faster and better than yesteryear's baseball players, but give me Babe Ruth, Walter Johnson and Willie Mays any day of the week. I think of DC the same way. Superman, Batman, Wonder Woman, Green Lantern, The Flash – these are the ’27 Yankees of the comic book world, and for that reason alone they’ll always hold my interest.

Marvel, meanwhile, represent young upstarts to me. Stan Lee, Jack Kirby, Steve Ditko and company came along in the '60s to modernize and rejuvenate an industry that had flat lined with new superheroes who had interesting, relatable alter egos. They had a sense of humor and something to say. Marvel changed the game, and for that I’m grateful.

At the end of the day, I’m thrilled that Marvel and DC both exist and continue to turn out comic books every week with the same spandex clad heroes we’ve loved for years and years. I love both companies. As long as they remain dedicated to telling the best stories they can, I’ll remain dedicated to them. 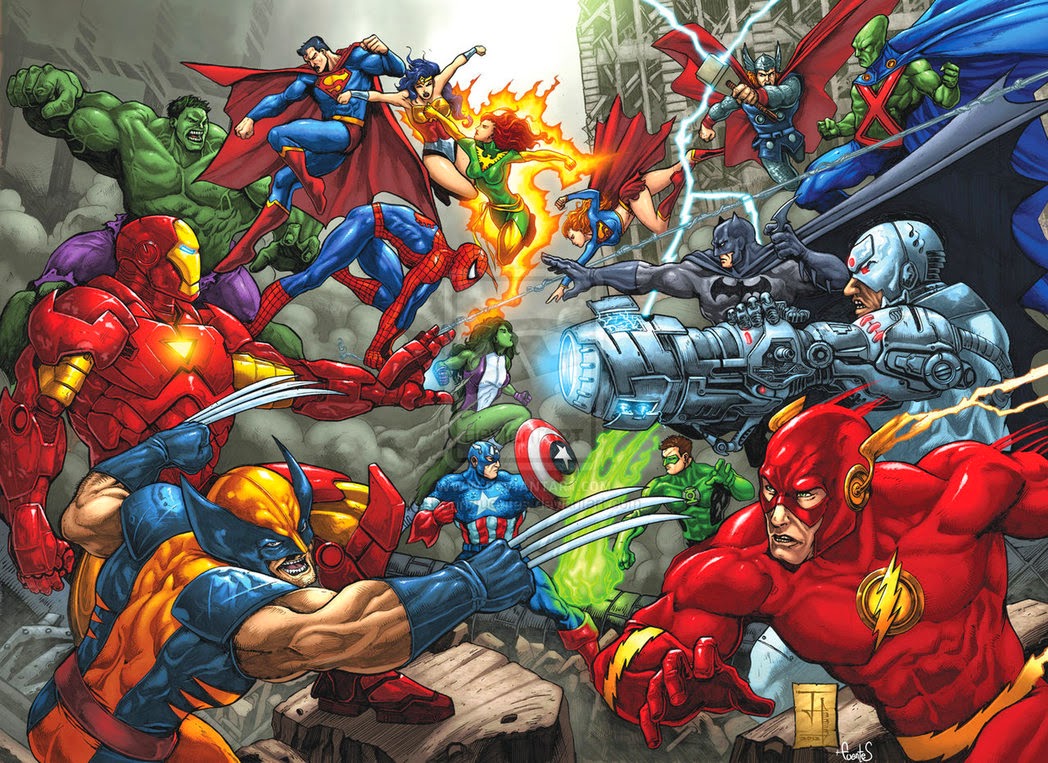 Adam: Well, clearly there is an answer: DC is better. Okay, let’s back up. I love Marvel. I really do. Some of my favorite things I’ve ever read were Marvel. I own many Marvel books, I love a lot of their characters and, if you’re truly a comic fan, you don’t care — which I don’t. The fact is that when I look at the books I collect, there is a hell of a lot of DC and only a few Marvel. I actually owe my love of comics to Marvel. The early '90s run of X-Men was what made me love the comics. Seriously, I can read that first arch with Claremont and Lee over and over. I wholeheartedly agree with what Mike was saying about the “tone” of the books, but to me there are a few other reasons why I think DC is better, at least from a comic standpoint.

First, of course, is the history. DC and Marvel both have history, but DC has WAY more. There is so much history with the characters and the universe in general. The DC Universe is so old and deep that it is fascinating once you dive into it. It’s like when I got into Green Lantern. I got to know this character, love this character, then got to go back 60 years and learn so much more.

DC, in my opinion, cares way more about their characters and their brand than Marvel does. From the mid '90s and through the mid 2000s, Marvel seemed to “reboot” their books every three years. Not only that, but they would also have multiple covers of each #1, change a costume, whatever. It got to the point of absurdity. Now don’t get me wrong -- DC pulled some of the same shit, but while Marvel was releasing its 70th version of The Spectacular Web of the Amazing Ultimate Spider-Man #1, DC was on issue 700 of Action Comics and concentrating on telling good stories.

While you can argue the previous statements, one you can’t argue (and one I’ve said before) is that DC does the crossover WAY better than Marvel. Over the past few years I would say that Marvel has had one good crossover: Infinity Gauntlet. Meanwhile, DC has Identity Crisis, No Man’s Land, Our Worlds at War, Blackest Night, etc. Marvel isn’t even in the conversation.

This stems from what I think is the biggest difference: when DC does something, they go all in. I’ll use two examples: the death of Barry Allen and The New 52. In 1985, DC decided to completely overhaul everything and, in essence, destroyed the DC universe (or multiverse, to be specific). The biggest impact of this was the death of Silver Age Flash, Barry Allen. In an industry that resurrects characters constantly, DC kept him dead for 23 years! Recently, DC decided to again overhaul their brand. Instead of re-releasing issue #1s every other year of various books, DC scrapped EVERY book and re-released every single book, including a book that had been going continuously since 1938!

Each company has had their missteps. I’m sure most of us want to forget Blue Superman or Spider-man’s Clone Saga, but what it really comes down to is who do you love? I love Superman and the Green Lantern, and while I also love the X-Men and Fantastic Four, it just comes down to who you love. What gives you the greatest pleasure, what world do you want to be in? Whatever your choice, you love comics, so you’re all right with me.

Dear Growing Up Nerdy:
There are so many toys from my youth that I'd give anything to play with one more time. If you could go back in time and grab one toy from your youth, what would it be?

- Toys and Time in Montana

Mike: Do I only get to choose one?? Why can’t I grab more than one?? How small is this fucking time machine?!?!?!

FINE. I’ll choose only one. So, I guess I’ll go back in time and grab… My G.I. Joe figures. I know that that’s more than one, but fuck you, I can’t choose only a single figure. I need at least three. No, fuck that, I need four in case I want to pretend they’re pro wrestlers and I need a tag team match. My four will be Flint, Destro, Hawk and Cobra Commander. Done.

Of all my toys when I was a kid, none were played with more than my G.I. Joe toys. With all of that crazy articulation, they were the perfect action figure. That’s not to say I didn’t love my other toys as well. I had the usual suspects in my collection, from He-Man and ThunderCats to M.U.S.C.L.E. figures and Super Powers. Shit, I forgot about Super Powers. How the hell do I leave those behind? Superman, Batman, Martian Manhunter, Robin, Shazam, Green Lantern...FUCK I loved those figures. There were no bells and whistles with those toys. Batman was just Batman. There was no Artic Blast Batman or Battle Damage Batman. Just plain ol’ fucking Batman. That’s all I needed.

Alright, so I’m traveling back in time and grabbing some G.I. Joe figures and Super Powers, leaving behind my Transformers and Robotech and Star Wars toys. SHIT I CAN’T LEAVE BEHIND MY STAR WARS TOYS!

Sigh. Okay, so I head back and grab only the essential Star Wars toys in my collection. I’ll need Han Solo in Hoth gear with a Tauntaun. X-Wing pilot Luke and an X-Wing. Speeder Bikes, because they explode and are awesome. A Rancor because it’s a fucking monster. Vader because Vader. And any Leia figure because I feel like she was my first girlfriend and I never truly got to say goodbye. Plus I want Leia to know what she missed. She’ll be all, “Oh, hey, so remember when I left you for Luke? Turns out he’s my brother. Oops.” And I’ll be all, “I’m sorry, did you say you made out with your brother?! It’s hard to hear you over my fucking TIME MACHINE. So, yeah, I’m doing pretty well for myself.”

I’ve never been happier that my wife never reads this column.

Adam: Give the guy a time machine and he goes back for everything. I need a new best friend.

Okay, so I have a time machine and all I can go back to get is toys? Because if I had a time machine, the first thing I’d want to do would be an audience member on Soul Train. After that I’d go back and try to make out with Grace Kelly before she was famous. Then I’d probably go see Purple Rain opening weekend. After that, I guess I could go back for a toy -- or, in my co-writer's case, 75 toys. 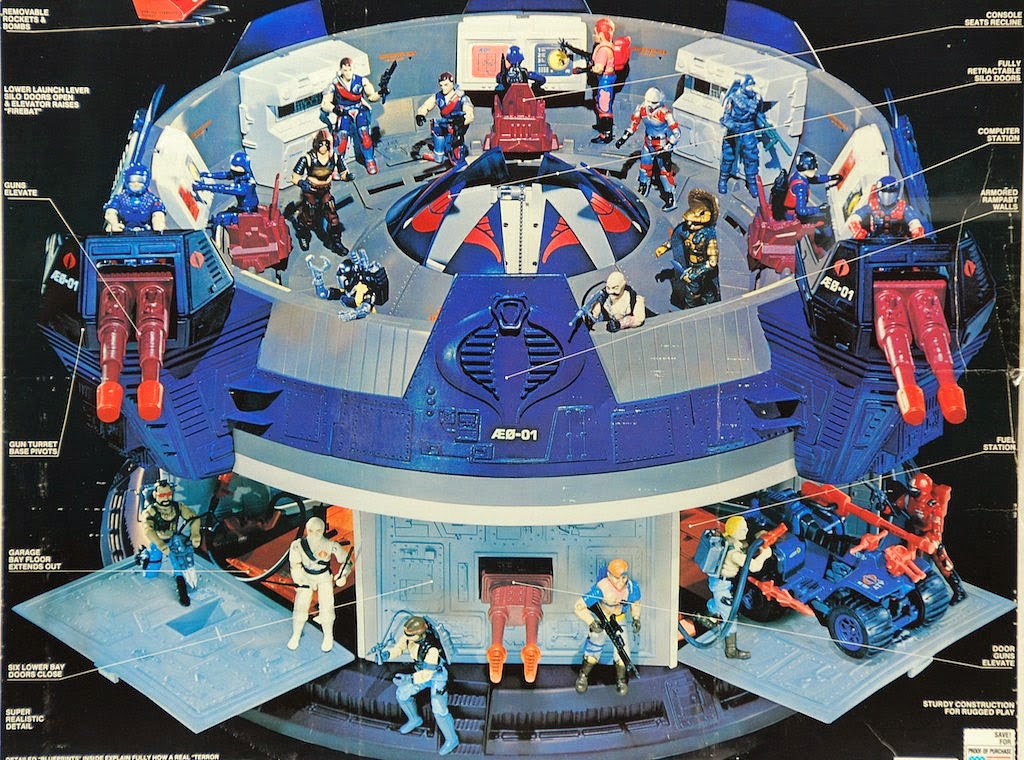 For me it would be either the Millenium Falcon or my G.I. Joe Terror Drome. There was something so great about that original Millenium Falcon. It had the little compartment where everyone could hide, all those awesome little details. It was one of the first toys that I remember really wanting and was so excited when I finally got it. As far as the Terror Drome, my parents did a pretty cool thing when I was growing up. My parents got all of us Christmas presents, but one year they would splurge on one of us kids. The year they splurged on me was the year I got the Terror Drome play set. I was always one of those kids who had more fun with the bad guy toys, so getting the Cobra Base was the best! It had a jail in it and all these different rooms all around it, but by far the coolest was in the middle it had an elevator compartment with a jet inside that would open and close.

Although if I could go back and get a toy that my parents didn’t love me enough to get, I’d definitely get the G.I. Joe Aircraft Carrier, the USS Flagg Flag (yeah, that was what it was called, not a typo). I wanted it so very badly. I wanted it more than anything, but it was over $100 for that bad boy. Of course, a complete version is going for about $1000 on eBay, so it may have been a solid investment.
Posted by Patrick Bromley at 7:59 AM