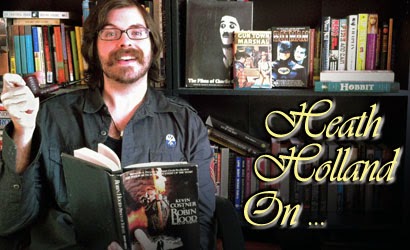 It’s been a while since I’ve gone full country. Let’s do this, y’all.

Seemingly made solely to cash in on the late-‘70s/early-‘80s blue collar fad in which Wrangler jeans and cowboy hats were totally the coolest trend in America and the only thing hotter than Magnum, P.I. was a mechanical bull, Urban Cowboy burst onto the scene and was a legitimate cultural phenomenon. 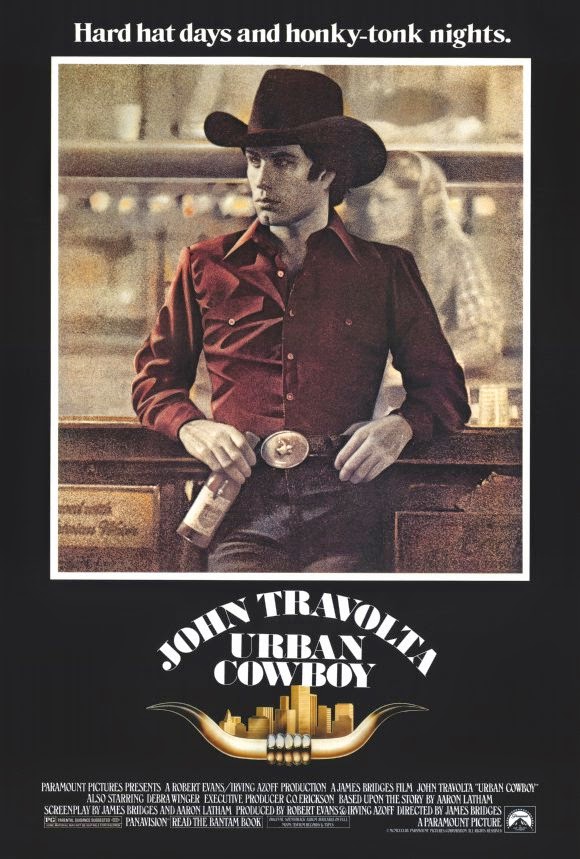 John Travolta stars as Bud (yep, Bud. It’s that kind of movie), a rural Texas guy who moves to Houston in pursuit of brighter prospects and ends up being seduced by the party scene, which here consists of hanging out at a bar called Gilley’s (an actual place owned by the real-life country singer Mickey Gilley), drinking a lot of beer and riding a mechanical bull.

Things get a little more complicated when Sissy (I told you), played by Debra Winger, arrives on the scene and Bud tries to impress her with the things that you usually do in a Houston bar in 1980. This mostly consists of the aforementioned drinking a lot of beer and riding that mechanical bull, though now Bud does these things with a really serious expression on his face.

As if things weren’t positively Shakespearean already, the movie throws us for yet another loop when an ex-con bad-ass named Wes shows up (played by Scott Glenn, possibly never cooler). Here’s the thing: Wes really knows how to ride that mechanical bull, and when Wes gets on that bull, panties drop. Including Sissy’s.

So now the stage is set for delicious drama to unfold as Bud competes with Wes for the affections of Sissy against the backdrop of the Texan bar scene of 1980. CAN IT GET ANY BETTER?! Don’t answer that. 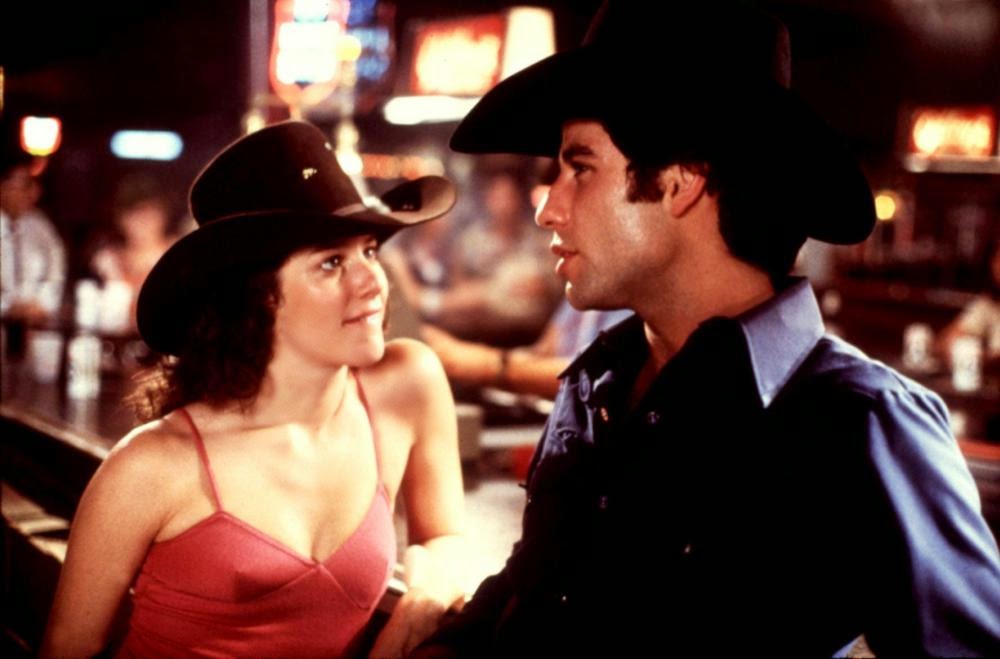 I have genuine affection for this movie. Of course I do, or I wouldn’t be writing about it, right? Honestly, Urban Cowboy is a pretty trashy movie, but it’s my kind of trashy movie. It took me a long time to warm up to it because of the whole “I live in the South but the South does not define me” thing, but once I got over myself things got a lot better and I realized how much I actually like Urban Cowboy and movies like it. It’s my Smokey and the Bandit complex.

The movie is part novelty and part train wreck, compelling because of how garish and tacky the fashions and the lifestyles are. But it’s also attractive to me in some weird way. It’s a simple life that consists of going to work in the daytime and then to your favorite bar at night, where there’s live music every night of the week. Gilley’s is a place where they can go and be themselves, where everyone’s troubles are all the same. It’s a place where everyone knows your name. If they had a bar like that in Boston then they could probably write an entire television show around it.

Don’t get me wrong, I don’t approach Urban Cowboy ironically. I genuinely dig it and I will watch it at the drop of a cowboy hat. For one thing, the casting is pretty great. John Travolta, a guy who was synonymous with Brooklyn and disco from his previous big hit Saturday Night Fever, was somehow selected to be a Texan country dude who dips snuff and listens to country music. I would love to have been in the meetings where this was decided. But the crazy part is that I wouldn’t want to see anyone else in the part. Bud is awkward and weird, but so is Travolta, so it benefits the movie. 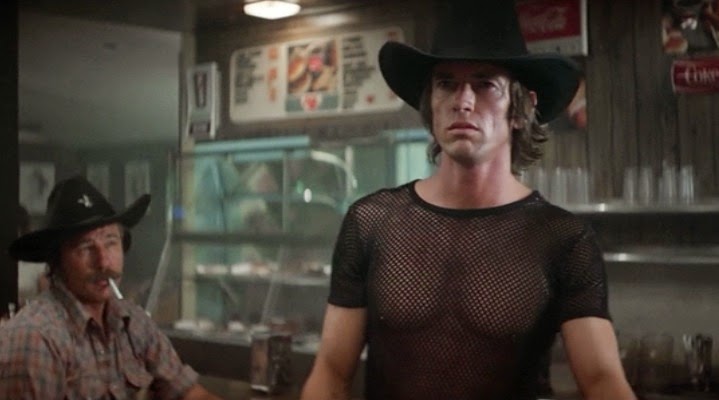 Debra Winger was a relative newcomer in 1980 and had mostly only appeared in guest spots on television shows during the late ‘70s. She’s perfect in her role as a young woman looking for a good man who has a decent job and will treat her well. It’s a LOT like the role she plays in an Officer and a Gentleman two years later, only with a southern accent.

I mentioned earlier that I think Scott Glenn has never been cooler than he is here and I mean that. I can’t think of a role that he’s portrayed that’s even close to being this virile and dangerous. It wasn’t long after this that he was taking more traditional roles in Silverado or even Silence of the Lambs, but here the dude is just pure machismo. If you replaced him with the male gender symbol (you know, the circle with the arrow coming out of it), I’m not sure anyone would notice the difference. There’s a scene where he sucks a real worm out of a bottle of mescal, clenches it in his teeth, then chews it up and swallows it. Do I have a man-crush on Scott Glenn in Urban Cowboy? You’re effin’ right I do.

The creative mind behind the film is a James Bridges, a screenwriter and director (he does both here) who was just coming off the success of two critical successes, The Paper Chase and The China Syndrome. He seems to have cashed in most of his goodwill on Urban Cowboy. The only other thing he did of any note after this is direct the Michael J. Fox film Bright Lights, Big City, which is also about a country kid going to a metropolitan city and getting into some trouble.

I can’t talk about this movie without mentioning the soundtrack that accompanied the film, because the music for this movie was a really big deal (number 3 on the Billboard top 200 charts, topped only by The Rolling Stones and Billy Joel). For me it’s a mixed bag. There’s some great stuff like Charlie Daniels singing “The Devil Went Down To Georgia,” but on the other hand there’s some watered-down Kenny Rogers music, not to mention the song “Lookin’ For Love” by a guy called Johnny Lee. If the song and its often-repeated refrain “lookin’ for love in all the wrong places” doesn’t annoy you the first time they play it in the film, you’ll be ready to jab a screwdriver in your ear by the fourth. Nevertheless, that song may have outlasted the film because I still hear it in the weirdest places. I wish I didn’t. 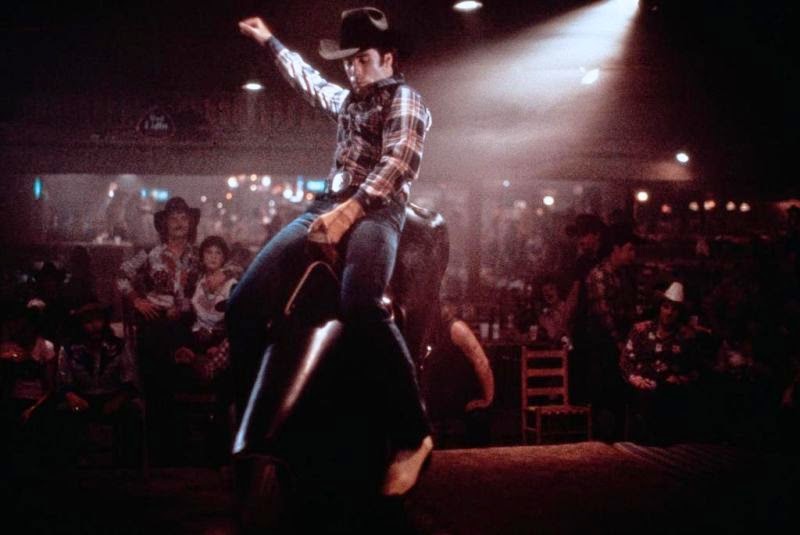 I think that’s enough talk about Urban Cowboy for one column. I know it’s not for everyone, but it’s VERY entertaining and pretty watchable. It never ceases to amaze me how the strangest movies creep into my psyche and set up shop, becoming films that I end up having a ton of affection and goodwill for despite their many flaws. I’d be hard-pressed to find a more perfect example of that phenomenon than Urban Cowboy.

Now if you will excuse me, the line for the mechanical bull isn’t getting any shorter.
Posted by Patrick Bromley at 12:01 PM