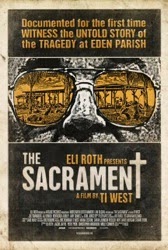 If the purpose of a horror movie is to horrify, Ti West's The Sacrament is a very good horror movie.

Indie horror filmmaker Ti West is best known as the modern king of "slow burn" horror (seriously, there are hardly any reviews that DON'T use that phrase -- I promised myself I was going to avoid it and now have done it in the first paragraph). His movies are all about steadily mounting dread and tension that feels like it's never going to let up. His latest film The Sacrament is another exercise in gradual horror, making us feel like shit's all going to go bad but putting knots in our stomachs as we wait for it to happen. What's different this time isn't just the way the story is told (more on that in a second), but who his monsters are. He's covered vampires and flesh eating viruses and satanists and ghosts, but this is West's first real film dealing with human horror.

AJ Bowen (Grow Up Tony Phillips) and Joe Swanberg (You're Next) star as documentary filmmakers for Vice whose friend Patrick (Kentucker Audley) plans a visit to see his sister (Amy Seimetz, Upstream Color), a former drug addict who has been living on a commune since leaving rehab. Intrigued by story of life on a commune and the mystery surrounding Eden Parish, Bowen and Swanberg tag along with cameras in the hopes of getting some footage. Immediately upon arriving, though, they encounter armed guards, commune members who appear to be hiding something and, eventually, the charismatic leader called only Father (Gene Jones). The presence of outsiders disrupts the order at Eden Parish, giving way to violence and chaos reminiscent of a famously similar tragedy from the 1970s. 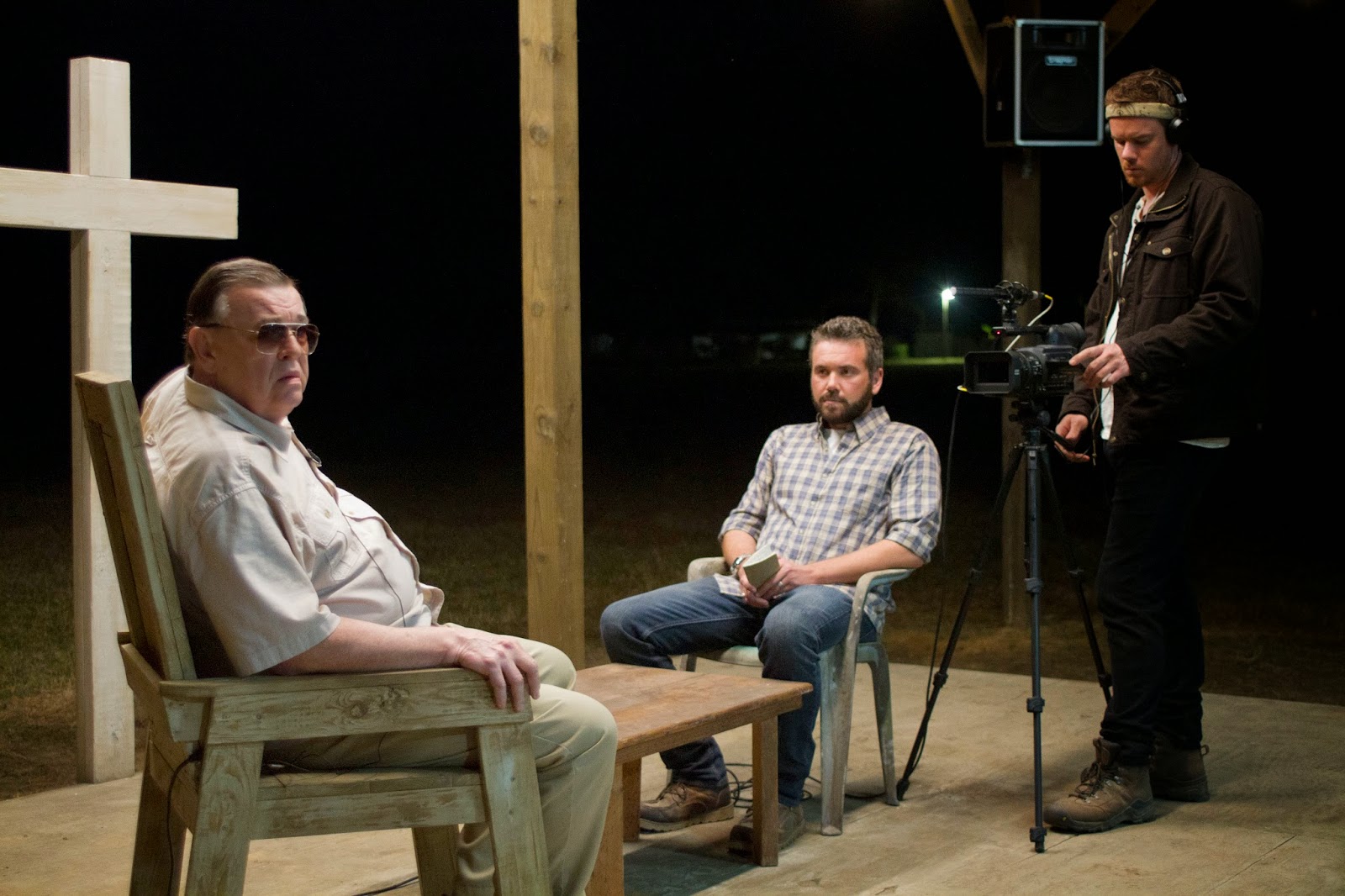 The Sacrament is being referred to in most outlets as West's "found footage" movie, which isn't entirely accurate. Yes, it is shot handheld and is told from a first person POV perspective, but the photography is slick instead of grainy and edited together into a faux documentary -- there is no conceit that the footage was merely "found," but rather that it was cut together into what we are presented. Aside from quibbling over the accuracy of the label, is the aesthetic West chooses for the story necessary? Does it add anything to the movie? I'm not so sure. On the one hand, he seems to be saying something about the way that media can distance us from certain atrocities; on the other, it's only because they're media that Swanberg and Bowen even have access to Eden Parish. Do those two observations cancel one another out? If the film is making some commentary on the "media," it is subtext that's buried deep, deep down. I'm searching for it because I like West so much as a filmmaker that I'm trying to justify the faux-doc approach (why else is it used?) and to convince myself the film is not as straightforward as it seems.

There's so much to like in The Sacrament that it pains me not to like it more. For the first two thirds, West does his usual expert job at building a sense of unease -- we know it's going to go bad, we just don't know when or exactly how. It's even more impressive that he's able to create his usual atmosphere of dread not in some creepy old house or hotel, but outdoors in bright daylight. Gene Jones is very good as the cult leader (but, then, so was Michael Parks in Red State, which suggests the quality of both roles is built in to that position), offering just the right amount of charisma, faux-wisdom and menace. I also like that so much of the cult is made up a diverse population; we're so used to seeing pressed-pants white people in bubble wrap in cult depictions (yes, that's a Dude, Where's My Car? reference) that seeing so many minority faces helps remind us why people might turn to such a lifestyle in the first place. They are disenfranchised. Discarded by traditional society. For as fucked up as life is in Eden Parish, at least there is equality. At least everyone is made to feel like he or she matters. 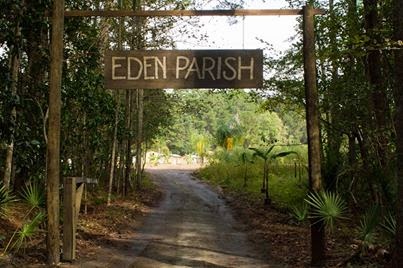 Unfortunately, The Sacrament ends up being much more concerned with the "what" happened than the "why." Yes, the events depicted are horrifying, and a case could be made for the senselessness of such acts being scarier than anything else. But for the film to really dig into our marrow, it needs to make us understand how such a thing is possible -- to tell us something about man's capacity for this kind of mass insanity. The Sacrament makes no attempt at such an understanding. West is content to present us with terrible images and simply leave them there to be terrible. Is it wrong that he co-opts a real-life tragedy as fodder for his horror movie? Not on principal. But by failing to provide any context or commentary for what is essentially a dramatized recreation of Jonestown, the movie fails to take on greater meaning or resonance.

Of Ti West's recent feature output (from House of the Devil forward), The Sacrament is probably my least favorite. Though it demonstrates that West is trying to do something different in both form and function (which should be applauded regardless of its success rate), the movie counteracts the things that I like best about West's work. For starters, the documentary aesthetic cockblocks his best formalist tendencies; while it's well shot by Eric Robbins (particularly for a [non] "found footage" movie), the photography lacks the beauty, the confidence and the patience of his previous films. The shots are what created the dread -- something could be lurking just outside of frame at any minute, and West's long takes would surely be interrupted by some sort of noise or jump scare. The language of horror films has taught us as much. When that doesn't happen, it ties the knot in our stomach even tighter awaiting a release that isn't coming. But The Sacrament loses that element; the dread is created in the performances (by Seimetz, primarily, and in Bowen's reactions) and in the overall tone. The aesthetic doesn't allow for much tension building. It's all point-and-shoot. 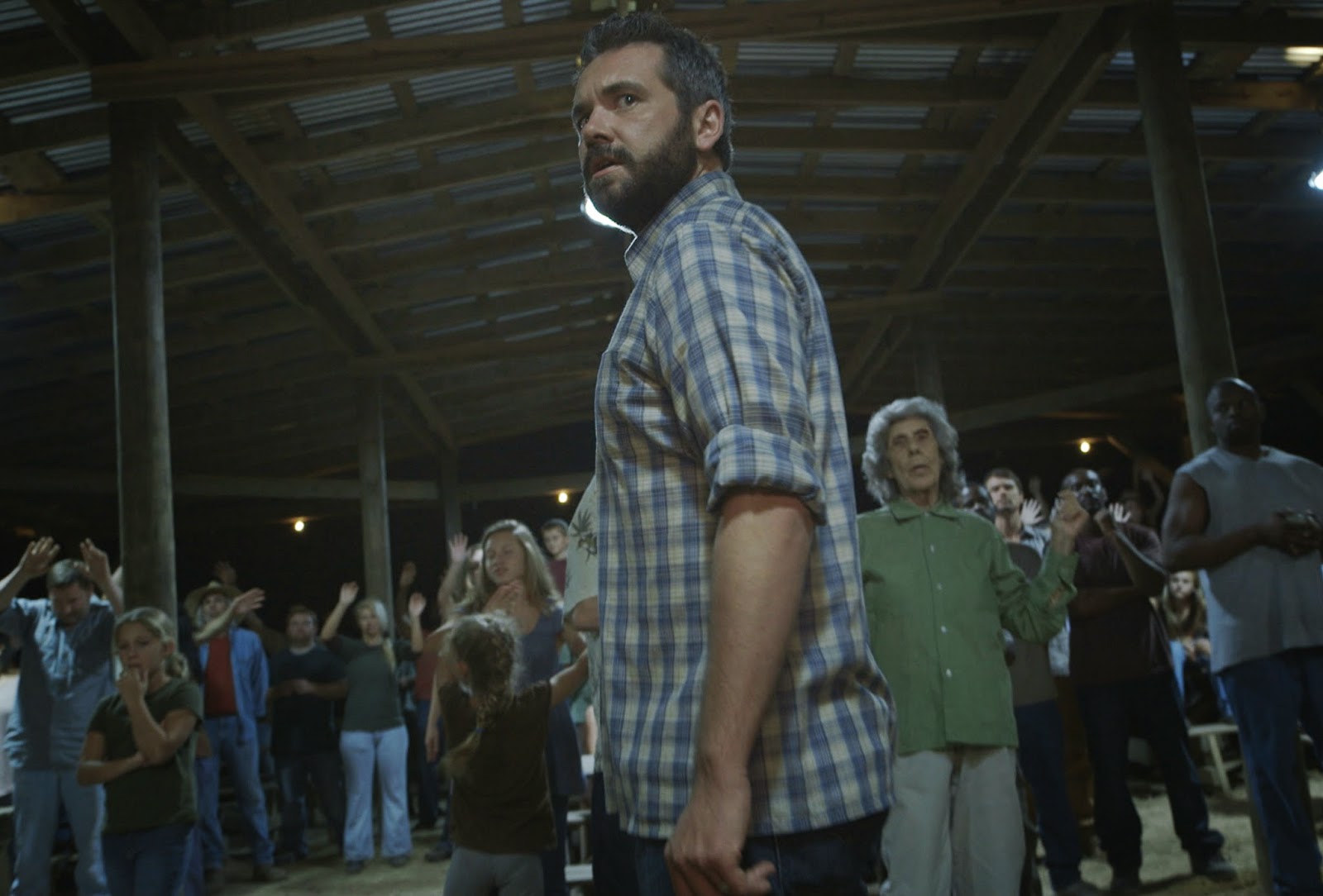 Worse, The Sacrament lets his characters down. In previous movies, West has written likable and engaging human beings -- people in whom I invested and would willingly follow even outside the context of a horror film. Much as I like Bowen and Swanberg as actors, neither one really gets to create a character at all in The Sacrament. Swanberg stays behind the camera for most of it, and all we ever really learn about Bowen is that he has a baby on the way. I wanted them to escape, sure, but mostly because I like the actors. I felt nothing for their characters.

In the end, The Sacrament does manage to horrify. It presents me with images I prefer not to have in my brain. I'm just not sure it earns them.
Posted by Patrick Bromley at 7:45 AM