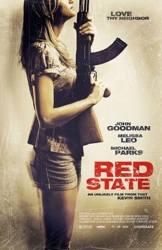 I have a suspicion that if Kevin Smith hadn't directed Red State, no one would be talking about it. That's because it's an unremarkable mess, interesting only because of where it fits into Smith's filmography. It's something "different" from the director -- it even obnoxiously says so on the movie poster -- but that alone does not make it very good.

As the movie opens, three sexed-up, Middle American teenagers (Michael Angarano, Kyle Gallner and Nicholas Braun, whose character is so middle American he sports a mullet and is named Billy Ray, because subtlety) plan to meet up with a woman they met online who will supposedly have sex with all of them. When they show up, the woman is Melissa Leo (whose performance here is clearly about MAKING MOVIES and RESPECTING THE WORK), who drugs the boys into unconsciousness. When they wake up, they're locked up inside the infamous Five Points church, led by fundamentalist preacher Abin Cooper (Michael Parks, who does a good job of being Michael Parks). Five Points, it seems, is no longer interested in just preaching the word of the Lord and has decided to do something about it -- which includes executing three sexed-up teenagers for their deviant, sinful acts.

I don't really want to say much more about Red State, because the element of surprise is one of the only things the movie has going for it. I'll just add that John Goodman and Kevin Pollak eventually enter the picture as ATF agents, and that their presence changes the movie from one thing into another. There's a genre shift in Red State that feels a lot like the ones in From Dusk Till Dawn or Something Wild, but that doesn't mean that the movie should be talked about in the same sentence as those other two. I'm not sure how deliberate the gear shift in Red State is, or if it's just Smith losing control of the tone; I suspect it's the former, but good intentions do not a successful movie make. The Five Points church presented in the film is obviously based on the Westboro Baptist Church (they of the "God Hates Fags" campaign) and Parks' character on Westboro's head douchebag, Fred Phelps (though mention is made of both in Red State, so we're meant to assume they still exist). I'm glad someone is making them the target of satire and ridicule; I just wish the satire and ridicule was stronger. By turning the members of the Five Points church into stone killers, Smith undercuts some of his own message. The beliefs and ideas of the zealots/nuts should be what is scary in Red State, not murder. Murder is always scary. You don't need the church for that.

It can, at times, be difficult to divorce my feelings about the crybaby stoner that Smith has become in recent years from his movie, but I'm going to give it my best shot. I don't think my frustration with Smith is a factor in my dislike of Red State; I think my dislike of Red State is yet another factor in my frustration with Smith. Perhaps if his filmography had been more varied overall -- if he had been pushing himself or taking chances throughout is entire career instead of resting safely in his wheelhouse movie after movie -- I'd be more forgiving of Red State's flaws. But seeing as this is really just a one-off exercise before Smith "retires" after his upcoming two-part hockey movie, this one feels like too little, too late.

Stylistically, Red State represents a major departure for Smith -- which is interesting, considering that his last movie, Cop Out, suggested he was helpless without his signature "style" (two people talking in front of a static camera). In fact, Smith and his usual DP Dave Klein are so determined to prove they're capable of something more that the movie ends up overdirected. It's all washed out color and hand-held photography and jump cuts -- the style starts to feel like a cover up for a lack of substance. There are certainly beats and sequences that work and give some indication of what Smith was going for, and if Red State had more of those moments I could recommend it. Instead, its fate is to exist as a curiosity in the Smith catalogue -- his lone attempt at stretching himself as a filmmaker too late in the game.

If the tonal change and borderline comedy of the last half of the movie didn't get me annoyed enough (especially a long scene of dialogue/exposition between Feds, which is equally indebted to Psycho and Burn After Reading), the end credits sure did. Smith breaks up the cast list into three categories: "Sex," "Religion" and "Politics." Does he really think Red State can be deconstructed that way? Or is he just attempting to assign greater meaning to what has just transpired? In some small way, I guess it worked, since just seeing it in the credits forced me to rethink Smith's intentions. I came to the conclusion that it's a pretentious touch and that if he was trying to combine those three things in a meaningful way he failed, but I thought about it nonetheless.
Posted by Patrick Bromley at 5:24 AM