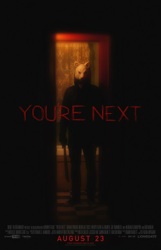 Stop looking for the next great horror movie. Here it is.

You're Next, the newest collaboration from director Adam Wingard and writer Simon Barrett, isn't a movie that traffics in twists, but rather surprises. You're better off being surprised. I'm going to try and tread lightly.

Maybe don't read the reviews (except for this one). And maybe don't watch the trailer, even though it's kick-ass. Just go see the movie opening weekend, hopefully with a big audience, and have a great time. This is a movie that deserves to be shared with a crowd. It is the best film of its kind since the original Scream in 1996: it's scary, smart, funny (but not jokey), suspenseful and clever. It has the same kind of energy as Scream, too, in that it's FUN without being goofy or silly. It's not a horror comedy. It's straight-up horror, but there are laughs in it -- sometimes because of funny or well-observed character interactions and sometimes in that "Holy shit!" way that only really fun movies provide. 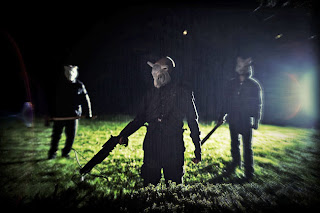 A wealthy family gets together at a remote home for what appears to be the first time in a while: there's Dad (Farrelly Brothers regular Rob Moran) and Mom (Barbara Crampton, making a welcome return), who is prone to panic attacks and requires medicating. There's Prodigal Son Drake (Joe Swanberg) and his slightly annoyed wife Kelly (Margaret Laney). There's beloved daughter Aimee (Amy Siemetz) and her new boyfriend, a filmmaker named Tariq (director Ti West). There's youngest son Felix (Nicholas Tucci) and his new goth girlfriend Zee (Wendy Glenn). And finally, there's Crispian (AJ Bowen), the son who turned away from his family's wealth and became a college professor, and his girlfriend Erin (Sharni Vinson of Step Up 3D), the biggest outsider to the group. Everything is going fine: there's some conversation, some awkward tension between siblings -- regular family stuff -- but then something comes crashing through the window. Before you know it, there are men(?) outside the house wearing only animal masks, armed and intent on breaking in to kill everyone. 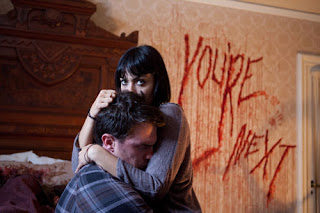 Unlike some of my other favorite horror movies of recent years, You're Next isn't about a whole lot more than it's about. It has none of the political implications of The Woman and isn't interested in the meta deconstructionism of Cabin in the Woods. This is not to say that it contains no subtext; Wingard and Barrett are clearly interested in blowing up some genre conventions and tweaking the traditional role of the Final Girl. But that stuff is secondary. More than anything, it's a movie that's incredibly good at being what it is: scary, suspenseful, funny, entertaining and FUN. It's a testament to just having solid foundations -- good writing, good direction, good cast. I'm reminded of something I saw Scott Derrickson write earlier this week: "A film doesn't have to reinvent the wheel, it needs to roll it well."

You're Next rolls the wheel really fucking well.

I have little patience for the home invasion movie, whether it's Funny Games or The Strangers or The Purge or Funny Games (2008) or whatever. This may be because I find them too horrifying; life is terrible enough without feeling like people in masks are going to break into my house and kill my family. The argument could be made that I avoid these movies because they work, which is what good horror movies are supposed to do. With You're Next, it's as if Wingard and Barrett sensed my unease (the world is all about me) and came up with a solution. What that solution is I won't say, but the pair managed to take a genre I typically avoid and spin it into one of my favorite movies of the year.

Anyone who has been waiting for Adam Wingard to blow up should hopefully see it happen after this. There was a ton of good stuff in A Horrible Way to Die -- a horror movie told as sensitive indie drama, and one I like more every time I see it -- but some of the directing choices got in the way of the otherwise strong emotional connections. His contributions to recent horror anthologies like V/H/S, V/H/S/2 and The ABCs of Death have been mixed, with some good ideas and a solid streak of humor (in the latter two, at least), but I hadn't yet seen Wingard firing on every cylinder. That would be You're Next, a movie that understands how to build a scare, how to create sympathetic characters in a short amount of time and, most importantly, gets the tone just right. It's a home invasion/slasher movie that doesn't feel mean spirited. For once, we're not supposed to be rooting for the goddamn killers. We like the characters -- even the ones who are introduced as douchebags -- and we want them to survive. 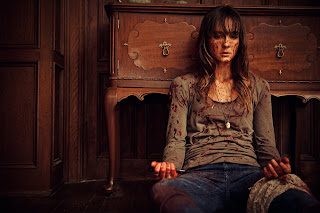 Lionsgate has been sitting on the movie for two years, and while I want to rail against them for keeping it under wraps for so long, I have to swallow that and commend them for giving the movie such a fighting chance. They're marketing the hell out of it (and actually doing a good job); more importantly, they're actually giving the movie a theatrical release instead of just dumping it straight to DVD the way they do so many of their horror titles. You're Next should be seen in a theater on a Friday night with a packed house ready to have a good time. It's that kind of horror movie -- one that celebrates the audience experience rather than punishing them.

I can't wait to see You're Next again, not just because it's a blast but because there are so many clever touches to Simon Barrett's screenplay that only really become clear once you've seen the whole thing play out. None of the characters are what you believe them to be when you first meet them, for better and for worse. The movie subverts our expectations in small ways, even though it's not really about being subversive. It's about delivering.

You're Next delivers. Please go see it.
Posted by Patrick Bromley at 7:27 AM