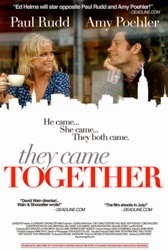 Joke for joke, They Came Together is the funniest movie since 2001's Wet Hot American Summer. That shouldn't be a surprise, since both films are directed by the great David Wain and written by Wain and Michael Showalter. They've done it again.

The second annual Chicago Critics Film Festival kicked off on May 9th, this year extended over the course of a week and moving out of the outlying suburbs and into the Chicago city limits. More than 20 films were screened over six days at the historic Music Box Theatre, from shorts to documentaries to heavy prison dramas to splatter comedies. It was a great week of movies programmed fully by film critics (the only festival in the world to do so), offering me a chance to see a bunch of stuff I've looked forward to, stuff I might never have seen and stuff I knew nothing about. 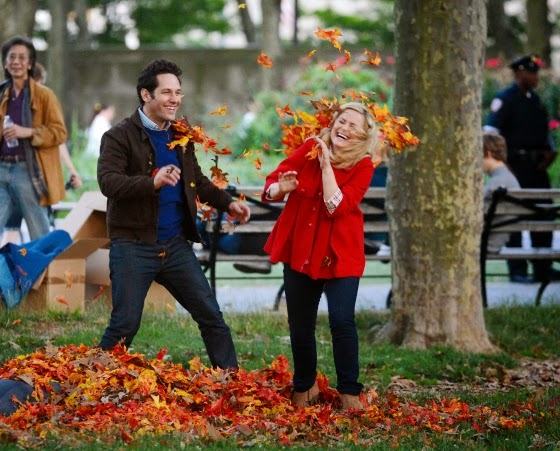 Paul Rudd and Amy Poehler are Joel and Molly, two New Yorkers (New York plays itself) who both work in the candy business -- she at an adorable boutique shop and he at the Big Candy conglomerate that just moved in across the street. After Joel has his heart broken by his icy ex (Colbie Smulders), he and Molly are set up on a blind date. And wouldn't you know they don't hit it off right away? But that they eventually bump into one another at a book store and bond over their mutual love of fiction books? And that the road to their romance is a bumpy one? And that there is a false crisis before they can reunited for good?

There is no point in describing the plot of They Came Together, because you've seen it dozens of times. That is not an accident. Wain and Showalter have mined three decades' worth of bland movies and constructed the Monomyth of romantic comedies. There's the "trying on clothes" montage. The guy who's best friends with his boss. The basketball game with the buddies. The manic, destructive makeout scene. Corporate boardrooms. Sassy/wise co-workers. Slacker younger brothers. Disapproving sisters. If you are as much a student of the genre as I am, you will identify every single trope the movie knowingly skewers, often times by just coming right out and saying exactly what they are ("Do you get it now, Mr. 'Combines Traits that Each of Us Represents and All You Need to do is Put it Together and You'll Be Just Fine' guy?"). It's not always that obvious, though, and part of the joy of the movie is letting the blunt force attack roll over you while spotting the hyperspecific details the movie gets right in all the corners. It has to be seen more than once just to pick up all the jokes. Most contemporary comedies don't even need to be seen once. 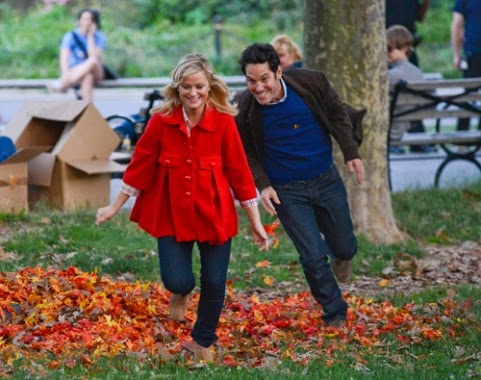 While Wet Hot was informed by the conventions of early '80s "summer camp" movies, it focused more on its own narrative and jokes constructed independently of its own genre. They Came Together is more beholden to its genre deconstruction -- like if Michael Showalter's "big game" speech in Wet Hot was extended to a feature-length goof. It's harder to care about the characters here because they're basically archetypal placeholders; at the same time, the cast is so stocked with killers that they engender our goodwill even when they're playing cutouts. Rudd and Poehler are warm and funny as ever (Rudd in particular is clearly relishing the chance to mock the kinds of paycheck gigs he's taken in the past), while the supporting players include Christopher Meloni, Max Greenfield, Michael Ian Black, Ellie Kemper, Bill Hader, Jack McBrayer, Ken Marino, Kenan Thompson, Jason Mantzoukas, Melanie Lynskey, Ed Helms and a handful of surprise actors I wouldn't dream of spoiling.

One of the best things about They Came Together is how much attention it pays to form, an increasingly disappearing concern when it comes to comedy. While all of Wain's movies have looked good, they're more about getting the job done than about formalism. Here, though, Wain and cinematographer Tom Houghton are careful to capture all the qualities of romantic comedies. That may make the movie look generic, as it embraces the same bright, flat two-shots of many a romcom, but there is art in the artlessness. Look at the the film opens on the ariel shots of the city (to which the narration calls attention) or the way Wain switches to shaky handheld during the pointless fight between Rudd and younger brother Max Greenfield (one of my favorite visual gags in the movie) to the push-ins during a dramatic moment that push in just a little too far. For as much as the film can crack us up with energy and non-sequiters, it's very smart about its own filmmaking. Amidst all the discussion about how truly funny it is, that fact shouldn't be overlooked. 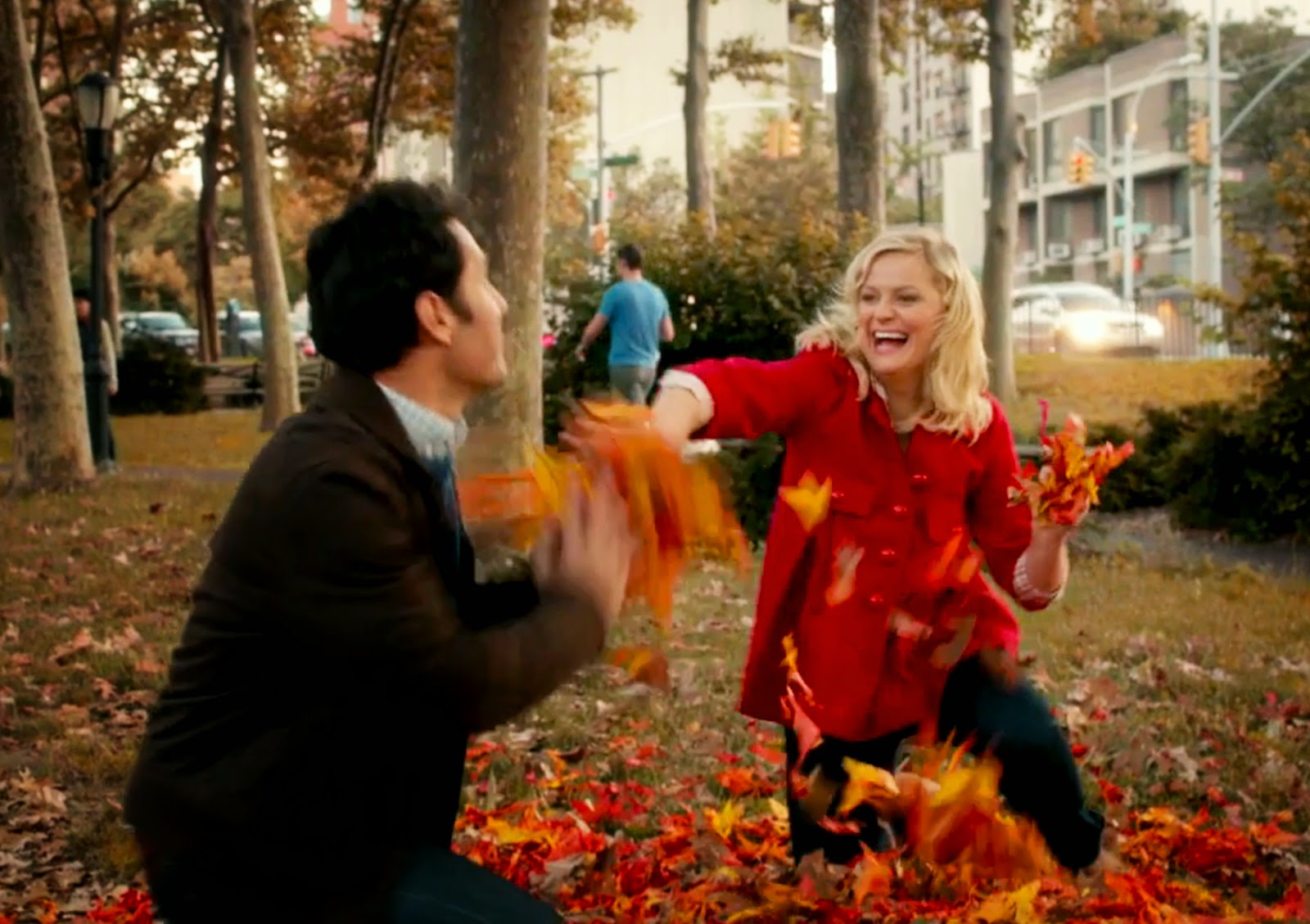 They Came Together doesn't hate the romantic comedy. In many ways, it could be considered an affectionate send-up; director Wain admitted to loving the genre in the post-screening Q&A, and it shows. What They Came Together is targeting is the type of insidious laziness prevalent in every contemporary romcom. The movie doesn't every suggest that we are stupid for liking fluffy movies about people falling in love -- it makes fun of the beats and the stock characters and the cliches that we've come to expect after years of being spoonfed the same shit. Wain and Showalter aren't going after the shit so much as they're going after the filmmakers who think it's ok to keep dishing it out.

Because if enough people see They Came Together -- and, really, everyone needs to see They Came Together -- it has the power to kill the romantic comedy as we know it. How will filmmakers like Robert Luketic or Anne Fletcher continue to make the kinds of movies they make and expect us to take them seriously when Wain has called out every single stupid trope? If They Came Together catches on like I wish it would (and because of its cult appeal, that's going to take some time), anyone making a romantic comedy in the future will have to be smarter and savvier about the choices he or she makes or else invite constant, scornful comparison.

I laughed more and harder in They Came Together than in any movie in over a decade. I'm sure it helped that the sold-out audience at the Music Box laughed from beginning to end -- it's a movie that plays great with a crowd on its wavelength -- but it's also that the movie is just that fast and funny. For those of us who were wearing out our Wet Hot American Summer quotes, it's another movie we'll be referencing with our friends for years to come.

They Came Together is out June 27th in limited release and on VOD.

Posted by Patrick Bromley at 10:52 AM