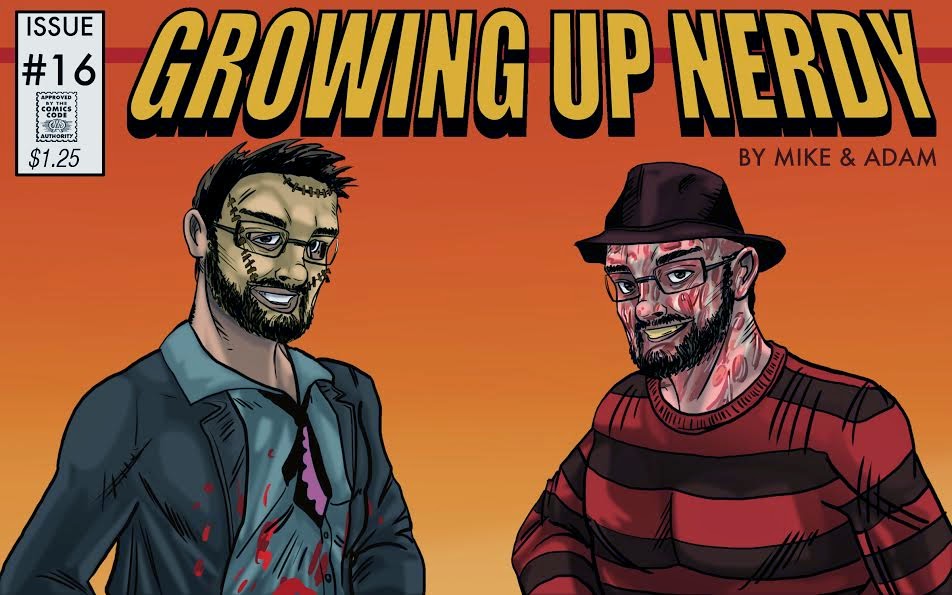 In honor of '80s Horror day for Junesploitation, the boys take on the biggest slashers of the decade.

With all the horror movies you two have seen, I’m wondering how you think you would fare in a Slasher movie?

Mike: Let’s get one thing out of the way: I wouldn’t survive very long in any horror movie. That’s not to say I couldn’t survive a similar scenario in real life (I couldn’t survive a similar scenario in real life), it’s just that in a horror movie I wouldn’t stand a chance. I would be the Shelly (Friday the 13th Part III) of the movie. I’m not tall, I’m not handsome, and my Ray Romano impression would annoy the shit of people in 3.7 seconds. I would be slaughtered in a violent, well-lit moment of ecstasy for both the murderer and the audience. Everybody loves when the annoying guy bites it. Consider me bitten.

Adam: Once again we end up writing one of the best movie scripts of all time in this column. First it was your robot love story, now it’s the “Mike Death Scene.” I say what we do is keep you alive for most of the movie, and the entire time you’re trying to open a jar of pickles (in your Ray Ramano voice). Every scene you just have this jar of pickles and you can’t open it. Bad guy chasing us down a hallway, we’re running, you have the pickle jar. We finally defeat the bad guy and you shout out “Guys! I opened the jar. LET’S EAT!” Bad guy wakes up and stabs you in the throat. This shit writes itself.

Mike: Um, no. I’m a method actor. I’d actually have spend time with pickles, to LIVE with pickles, and that’s not happening. At all. I quit this movie.

Adam: Listen, I’m no spring chicken, but I think I’d fare pretty well against these horror movie assholes. Why? Because I’m fucking awesome.

I guess you need to break it down to the big four: Jason, Freddy, Leatherface and Michael Meyers. So let’s see exactly how well Mike and I would fare against the legends of slasher horror.

Mike: I don’t think I’d last two days against Freddy because, damn it, I love to sleep. People like Patrick and my nerd life partner Adam can survive on little to no sleep. They seem to be able to function, perform simple tasks and communicate. I, however, am less than useless on no sleep. I’m crabby, uninterested in life and would rather Freddy just shred me to pieces then to have to drink coffee, like, ever. 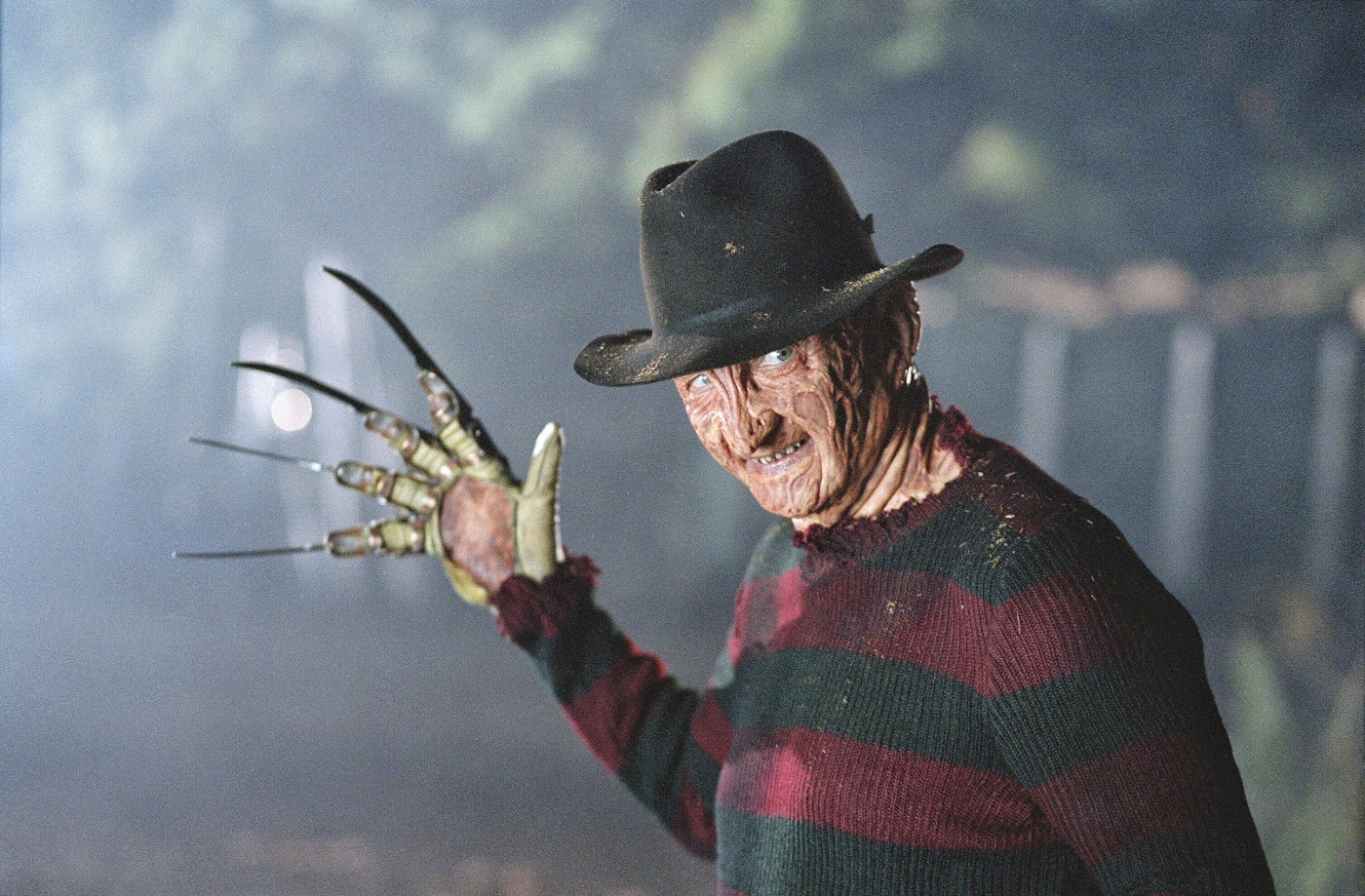 Adam: First off, if someone told me I couldn’t sleep because of Freddy, I’d go to the bank, take out about $1,000 in singles and head to the strip club -- preferably Scores. I don’t care how tired you think you are, Red Bull and boobs will keep you up for three days minimum. So let’s just say around day four I finally can’t take it anymore and I’m out of money. I’ve had four days to mentally prepare my ass. When I finally fall asleep I’d be….you guessed it…. A MOTHAFUCKIN’ DREAM WARRIOR! And I won’t be one of those pussy Dream Warriors. I’d be Roland “Badass” Kincaid with super strength. I’d grab Freddy, rip off his head and say something awesome like, “Looks like somebody lost his head!” Then I’d wake up, go to the bank, take out another grand and head back to the strip club.

Mike: Kind of like with Freddy, I think I’d be wishing for a quick death with Leatherface. Not for any reason other than those movies make everything look so hot! Not attractive-hot; I mean hot-hot. Like, never-stop-sweating-hot. Like, why-on-gods-green-earth-did-I-leave-the-comfort-of-air-conditioning-to-come-to-this-fucking-place-hot. Like, seriously-its-no-wonder-people-are-putting-human-skin-on-their-face-because-this-kind-of-heat-would-make-anyone-go-crazy-hot. Like, sure-I-want-to-travel-to-somewhere-warm-with-some-good-looking-women-but-I-want-to-see-them-in-a-bikini-so-why-the-hell-did-we-decide-to-come-fucking-here-hot? Also, I don’t eat meat. 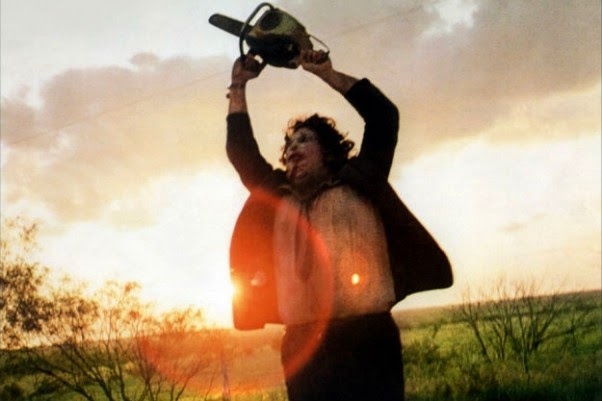 Adam: Leatherface would so be my bitch. For all his scariness, Leatherface is a living guy. The other three, you need to worry about them coming back, they’re pretty tough to kill. In the original Texas Chainsaw Massacre he’s injured by his own chainsaw! So while he’s a big dude who can run fast, he’s also proven that he's kind of an idiot. I’m pretty sure I could outthink and eventually kill old Leathery. Then I’d go to the bank, take out a few grand, find Vanita Brock and ask her if she wants to go to the strip club with me.

Mike: Once again, I’m fucked. Here’s my first issue: If I’m ever camping, you may as well kill me anyway. I want no part of it. The only thing that could possibly make spending the summer at camp sound fun is knowing there’s an unstoppable force killing us off one by one. It would give me something to look forward to, I guess. I mean, I’d like to think I’d be the guy having sex with all of the ladies around camp, but the fact of the matter is I’d be the douche laying on his cot all night reading Star Trek novels by flashlight. It wouldn’t be hard for Jason to find and even easier to kill me. 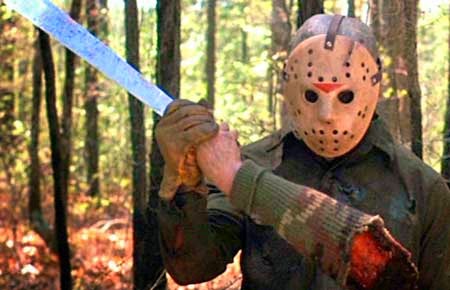 Adam: Jason is a tricky one because he’s everywhere and kills everyone. You would think you’re okay in the city or in space, but he’s shown up there as well -- not to mention the fact that Jason has come back to life several times, has regenerated parts of his body, and even after being cut up, managed to possess someone else’s body. Through all this, though, the one thing no one has been able to do is cremate Jason. They’ve tried, but no one has actually done it. So the key to this is fire. Folks, humans have been mastering fire for the past thirty thousand years. I’m sure if we all put our heads together we could find a way to cremate Captain McWrinklepants and his hockey mask. Then it's bank, club, make it rain.

Mike: If I’m not hanging around women, am I vulnerable? I realize Michael Myers kills more than just babysitters, but I feel like as long as I don’t work in any sort of hospital setting, don’t pal around with teenage girls (damn) and keep my distance from Laurie Strode, I’ve got a shot. Maybe I’ll go camping just to be sure. 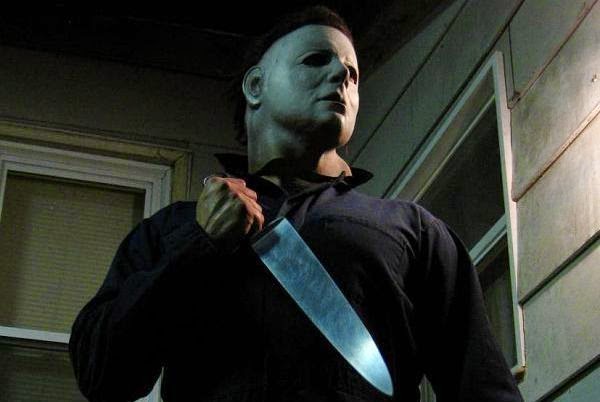 Adam: In all of these Halloween movies, nobody has ever tried just hanging out and talking to Michael. Think about it, every time the guy shows up girls are screaming and throwing shit. What if Jamie Lee Curtis just turned to Michael and said “Hey, you look tired, how about I rub your shoulders and we watch The Bachelor?” My guess is that she would have gotten a lot further with him than jumping right to stabbing him in the eye with a hanger.

Maybe Michael Meyers is just a really misunderstood, lonely guy. He gets commited as a child, one psychologist calls him evil and the poor guy never gets a chance to redeem himself. Maybe stabbing is the only way he knows how to talk to girls. So I’d go to the bank, take out a couple grand, and bring Michael Meyers to the strip club. Worst-case scenario is he gets pissed off and goes on one of his stabbing rampages, in which case there are plenty of attractive girls to occupy him as I make my stealthy exit.
Posted by Patrick Bromley at 7:43 AM