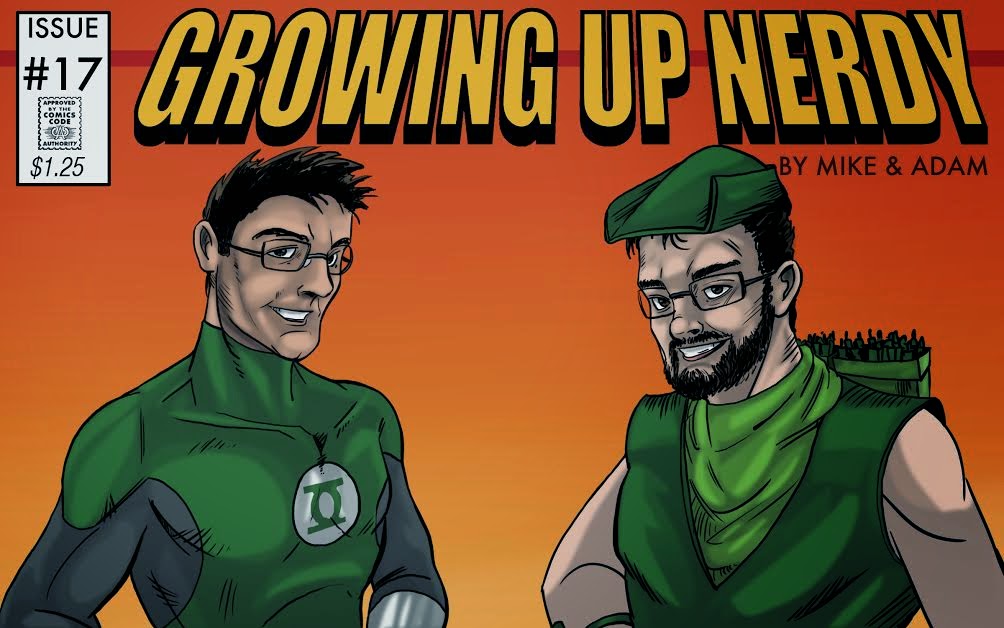 This week, the Nerdy Boys have some advice for the biggest nerds of all: themselves!

If you could go back and give your younger versions of yourselves some nerdy advice, what would it be?

Adam: If I had a time machine to talk to my younger self, the first thing I’d do is give myself the list of girls to stay the hell away from. Also, your freshman year of high school, the girl Lori who sat next to you that you had a crush on? Yeah, she totally had a crush on you too. Hit that!

Now that that's out of the way, let’s talk turkey.

EXAMPLE: I was re-watching A Nightmare on Elm St 2: Freddy’s Revenge and some major shit goes down at Lisa’s house. Next scene she’s in a car driving for a showdown with Freddy. Instead of young Adam just being scared and enjoying it, old Adam is just saying, “What type of parents does she have that just let her ride off in the middle of the night?!”

Next, I’d probably tell myself to not buy that copy of Silver Age Green Lantern #1. Just to clarify, my copy of Green Lantern #1 is the prize of my comic collection. I love that I own it, but I totally shouldn’t have bought it when I did. 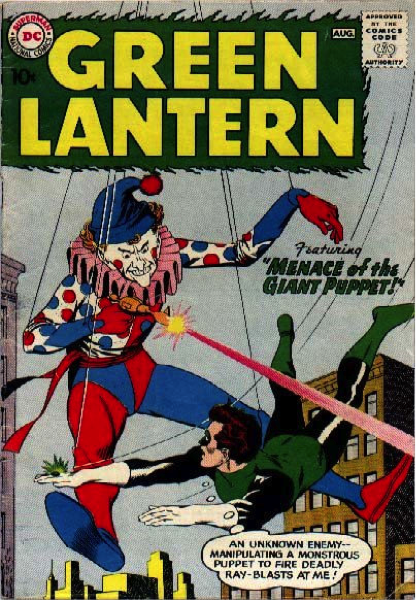 You see, during my final year and a half of college I wasn’t able to work, so literally everything I needed (books, food, gas, etc) had to be put on my credit card. I amassed a HUGE debt on this card but was still young enough to not realize that just paying off the minimum wasn’t going to cut it. Well, one year at the Chicago ComiCon a booth was getting out of the business and, on that final Sunday, was selling some great comics at a great price. I got a hell of a deal on my GL #1, but that doesn’t mean that I didn’t pay a shit-ton for it. I had no business buying that comic at the time. I really shouldn’t have, and it drove me further into a big debt hole.

The happy ending is that I eventually got out of debt. I just think buying that comic a little later in life would have been a much better idea.

Probably the best advice I would give a youthful, nerdy Adam would be to not accept the Magnus Robot Fighter #1 from Mike.

Okay everyone, time to sit back for Story Time with Adam!

Back in the early '90s, Valiant Comics obtained the rights to Magnus Robot Fighter. Every Wednesday, my Nerd life partner Mike and I would walk up to the comic store, then go down the street to Burger King. One day Mike did not have any money, so being the good friend I am I spotted him the $9 for a comic and some BK. Later that day we went back to Mike’s house and he asked if instead of the $9, how about he just gives me the copy of Magnus Robot Fighter #1, claiming it was worth WAYYYY more than $9 and I was getting a HELL of a deal. I wasn’t really into Valiant. Or Magnus, for that matter. In fact, because he was a friend I wasn’t even going to ask for the money back. However, Mike insisted and I took the comic. 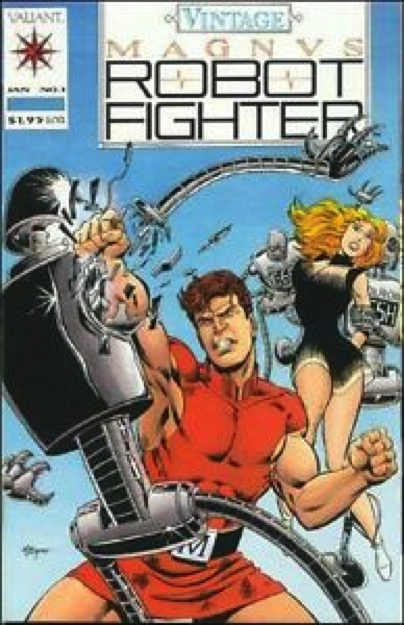 Folks, I’m not kidding when I say Mike has held this FUCKING comic over my head since 1991! Every single time I say “No” to him, he says “Dude, remember that Magnus #1? You owe me, man.” Every time. I’m not kidding, he could ask me for a kidney and if I said no he’d tell me that I owed him because of that damned comic.

Here’s the kicker of it all, though: the comic is a reprint of a reprint! It’s a 2nd printing of the retelling of the original 1960s version! The comic itself is worthless! Recently I got rid of about 75% of my comic collection and I had this Magnus in my hand. I contemplated getting rid of it, but I thought to myself “I can’t get all those favors back.” So fuck it. I still have the comic. What you think of them apples, Pomaro?!!

Mike: To be honest, if I could go back in time and have a talk with young Mike, I wouldn’t waste my time on talking about movies and comic books. I’d be spitting all I’ve learned about the ladies and helping to mold a full-blown mother fuckin’ sex machine. But since this column isn’t called Growing Up Sexy (look for Growing Up Sexy with Mike and JB in September!), I’ll stick to the nerdy shit.

My first order of business would be to tell young Mike (or YM for the purposes of this article) that he did a nice job picking nerdy friends. My buddies that I met through our local comic book store when I was a kid are still my friends today, so at least I did something right.

Now, on to comic books. I was a child of the '90s, when there was a big comic book boom. Comic stores were popping up all over the place and every series had tons and tons of variant covers with different artists, hologram covers, poly-bagged books that you HAD to leave sealed, etc. The '90s forced you to buy multiple copies of the same damn issue. This was a time when people believed these comics would be worth something some day. Guess what? Very few are. I would tell YM that it’s okay to buy only one copy of Youngblood. I would encourage YM to open up the poly-bagged X-Force # 1, throw away the card inside, and enjoy Rob Leifeld’s attempt at drawing feet. Want two copies of Bloodshot #1? No need. You’ll find it in a dollar bin at a future con. Along with the Harbinger #1 that is currently behind to counter with a $100 price tag on it.

Also, quit obsessing over the condition of comic books, YM. Sure, if you’re going to spend your money you don’t want it to be on a damaged product, but you also don’t have to pick up every fucking copy of Ravage 2099 trying to find the one with the least amount of spine damage.

Movies: I wouldn’t have a ton of advice for YM here, only to say try more movies. I know you love Indiana Jones and you love watching it over and over, but there’s a whole world of films out there that await you.

TV: This one is a little hard. Let me explain: When I was young, I really liked Star Trek. I have very fond memories of watching Star Trek: The Next Generation at my sister Nicole’s house and making a communicator out of card board. The first time I ever rode my bike alone to our local Toys “R” Us was to buy a Spock toy that I had seen there earlier in the week. I also remember watching Deep Space Nine as it aired and writing notes in gibberish to my friend Chuck in school after we had seen the "Babel" episode the night before. First Contact remains in the running for the movie I’ve seen the most in a theater. So Star Trek has been a part of my life for a long time, but it’s something that I would go loooong stretches in between watching or reading. I was a fan, but sporadically so. I would love to tell YM to stick with Star Trek throughout the years and never drift. There are so many years of Trek TV ahead of YM, including a bunch of movies, and they should all be met with excitement as they’re happening. With all of that said… 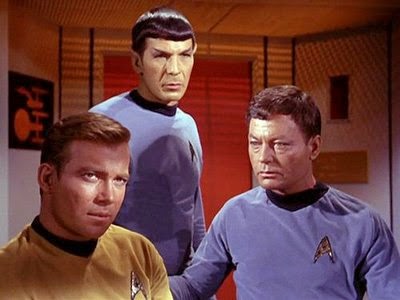 I recently picked up Star Trek: The Original Series on Blu-ray through Amazon and began watching it a couple of weeks ago. It’s hard for me not to be too hyperbolic about Star Trek right now, but I’ll try. IT’S THE BEST. I’ve seen many of the original series episodes over the years, but they are hitting me in a way they never did before. Star Trek is a universe I never want to leave and am beyond excited to continue catching up. My plan is to plow through all of the Trek series, from The Original Series through Enterprise, like my nerdy partner Adam recently did. So while I want to shake YM and tell him he’s missing out on so much greatness, doing so would leave current Mike with nothing new to discover.

Also, maybe Star Trek is something that just speaks to the older me. I liked Trek when I was young for the surface level shit, like phasers and Klingons and Locutus of Borg. Now I’m drawn so much more to the themes and character moments. Maybe that’s why it didn’t connect as deeply when I was young. Either way, I’m more than thrilled to have found Star Trek later in my life as opposed to never making the discovery at all. So instead of telling YM to stick with Trek, I’ll just tell him to not forget to record Scorned on Showtime at 2:00 am. Shannon Tweed for life.

Adam: Okay, “Growing Up Sexy?” I’m so into that. Even though you aren’t writing it with me, I have a feeling that I’ll be mentioned quite often.
Posted by Patrick Bromley at 7:34 AM