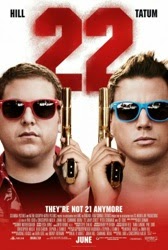 A movie that shouldn't have worked but did gets a sequel that really shouldn't work but does.

2012's 21 Jump Street was one of my favorite studio comedies in recent years -- a terrific mix of the buddy cop genre I hold so dearly, great character work, a whole bunch of inspired jokes and a script with slightly more on its mind than just making us laugh a lot (which it does). It was also a surprise success, so it stands to reason that a sequel be put immediately into production. Thankfully, the smart people involved with 22 Jump Street -- directors Phil Lord and Chris Miller, writers Michael Bacall and Jonah Hill (plus several others) and stars Hill and Channing Tatum -- recognize that the only thing worse than a big-screen adaptation of a forgotten '80s TV show is a sequel to a big-screen adaptation of a forgotten '80s TV show.

That's ultimately ok, because the jokes work. The movie is funny beginning to end. 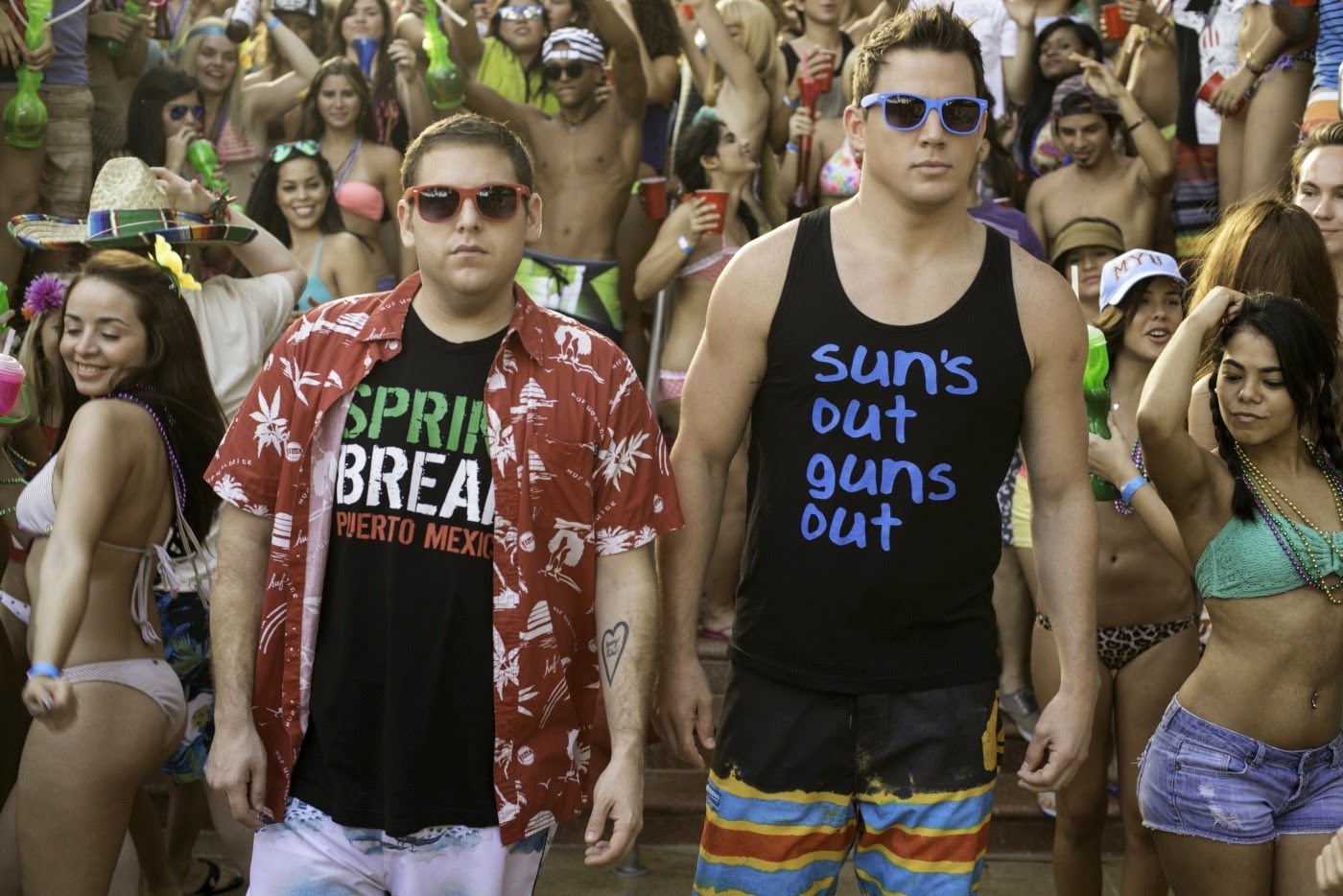 Picking up just after a "previously on" recap of the first movie, the sequel finds Schmidt (Jonah Hill) and Jenko (Channing Tatum) botching a bust and being reassigned to doing the EXACT SAME THING AS BEFORE (emphasis the movie's, not mine) -- they're to go undercover at college and find the supplier of a dangerous new drug called WHYPHY (Work Hard Yes, Play Hard Yes). On campus, Jenko befriends the college quarterback (Wyatt Russell, son of Goldie Hawn and Kurt Russell) and finally gets the chance to live out his football fantasies, which Schmidt falls through the cracks -- though not before becoming romantically linked to a cute art major (Amber Stevens), who is more than who he suspects her to be.

So, yes, the big gag of the movie is that its plot beats are identical to the last outing. It holds true to that formula until it doesn't, taking enough small departures and variations so as not to feel like a complete rehash the way something like Anchorman 2 does. Directors Phil Lord and Chris Miller continue to apply their animation approach to live action, packing the frame with all kinds of jokes -- verbal jokes, visual jokes, pop culture jokes, meta referential jokes, jokes both lowbrow and highbrow. 22 Jump Street is the kind of comedy that keeps finding new ways to be funny, and the movie's breathless energy and sense of invention ensure it is lively and engaging even when it's covering familiar territory...on purpose, of course. 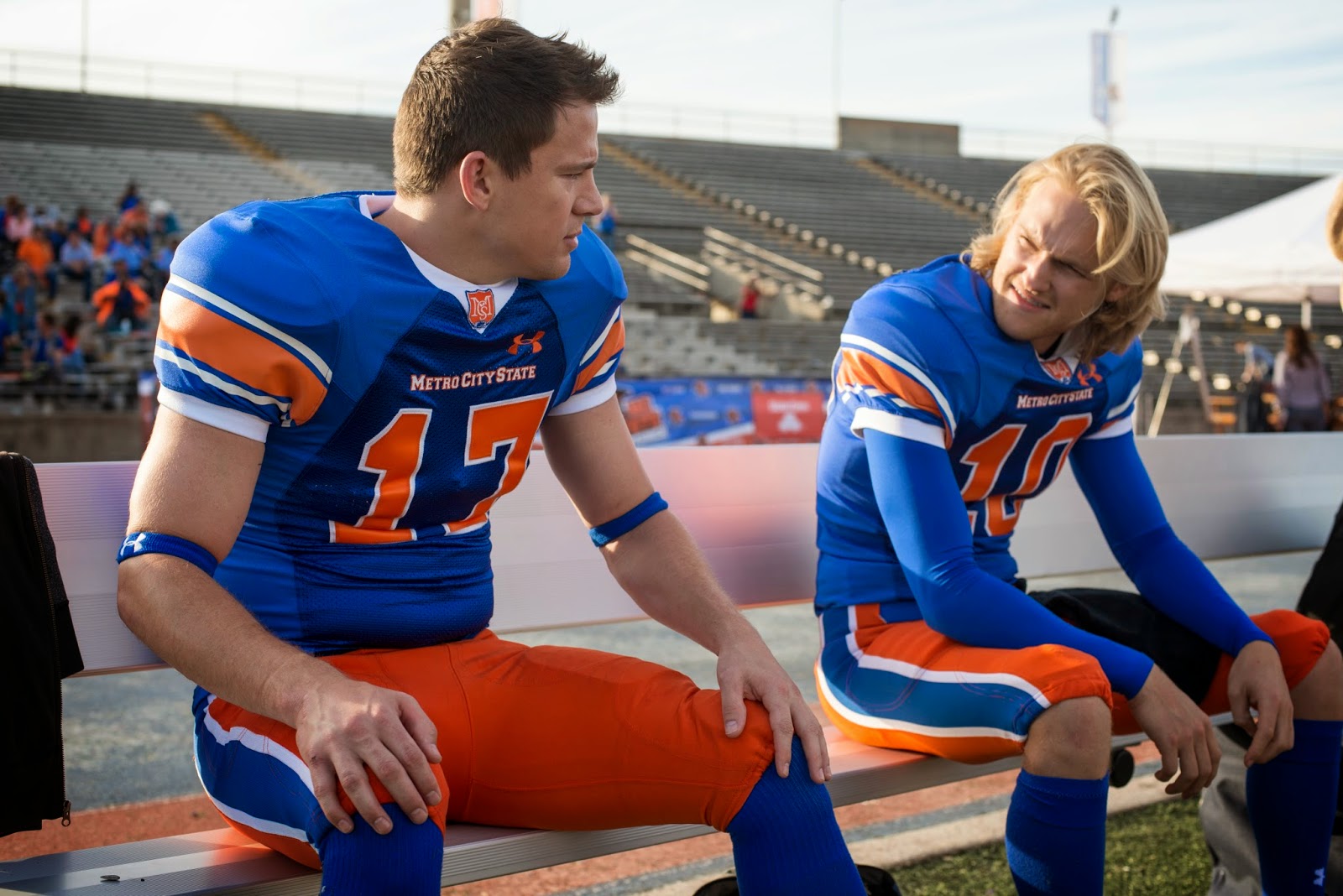 Once again, Channing Tatum is the movie's secret weapon. Even without taking us off guard this time around -- we know he's funny and we expect it -- Tatum gets all the biggest laughs in the movie by being very sweet and very sincere and never going for a laugh but rather letting the laugh come to him. Contrast that with Jonah Hill, who is once again fine as his partner (and gets a couple of huge laughs) but who pushes and pushes while Tatum sits back and underplays. Part of that is inherent in their characters, but part of it is just Hill's comic style. He hasn't really underplayed a part since The 40-Year Old Virgin.

Together they're very funny, and the real charm of the movie is in the chemistry between the two stars. Tatum and Hill have a relaxed ease to them (as relaxed as Jonah Hill can be) and seem to actually be friends. When most buddy comedies try to create conflict out of having the two main characters bicker, it's nice to see one that's all about supporting your best friend and trying to bring out the best in one another. Despite all the raunchiness and swearing (everyone curses in the movie a lot, especially Ice Cube, who gets way more to do this time around), the two Jump Street movies are, at their center, incredibly sweet.

There are scenes and jokes that I was playing over in my head before the end credits finished running (speaking of the end credits, they are terrific and funny and basically squash the idea of doing future sequels). It's that kind of movie -- the kind in which certain gags stand out more than the whole. The original movie took the opportunity to say some interesting, smart things about young people, whether it's the way they self-identify or the way it has become cool to be more socially conscious or, best of all, the way a generation ought to respect itself more. 22 Jump Street is far more insular, too busy looking inward at itself as a sequel to bother observing or critiquing anything about the outside world. The only thing the movie is interested in critiquing is other movies. Or itself. 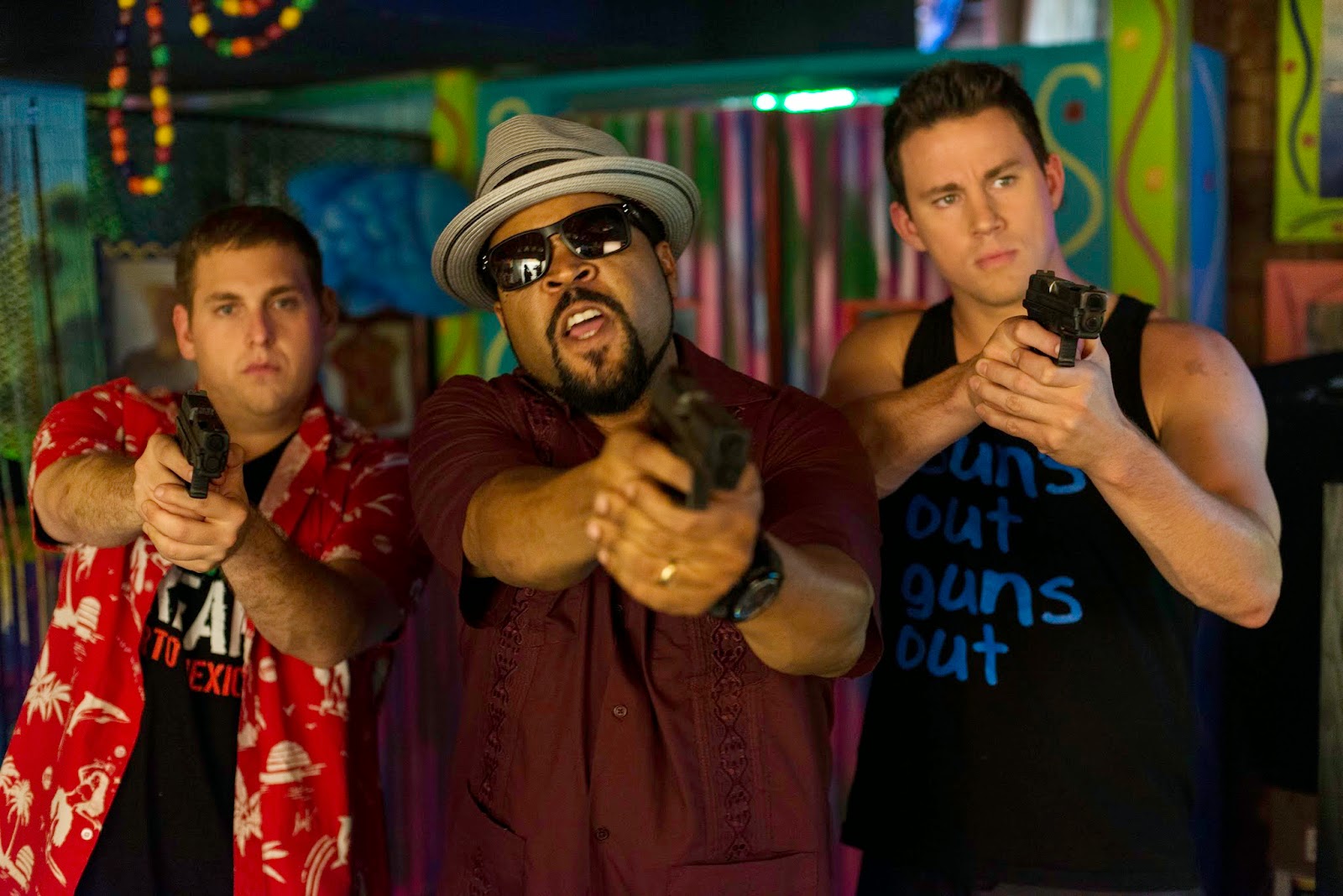 Between this and The Lego Movie, Phil Lord and Chris Miller have directed two of the funniest movies this year (I would say funniest, but They Came Together is out in a few weeks). After sitting through a string of trailers for upcoming comedies that appear to range from lazy to staggeringly incompetent, it's nice to see these filmmakers put so much care and effort into making a comedy that never coasts and never takes the easy way out -- even when, this being a sequel to a very successful comedy, that would have been the obvious thing to do.

Is 22 Jump Street as good as the original? Not quite, but that's a tall order. The first movie had the benefit of being a wonderful surprise -- it was a stupid idea that had no business being as smart or funny as it was and offered us the chance to watch Channing Tatum become a movie star during its two hour running time. It benefited from low expectations all around. But because it was so funny and so successful, we're all going into the sequel expecting greatness, which the movie never quite achieves. It's still very clever, layering both jokes and levels of meaning into every scene to make a movie that works, as I'm fond of saying, by being both the thing and about the thing. 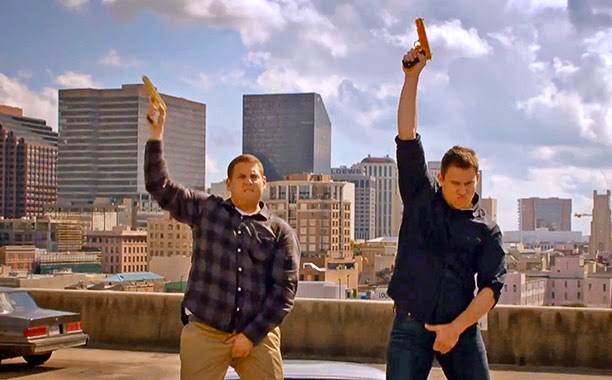 Comedy sequels are almost never good. 22 Jump Street is smart in the way it admits upfront exactly what it's doing, then spends the rest of its running time exploring and subverting the tropes of sequels -- it's a lot like Gremlins 2 in that way. I'm reluctant to call it the BEST comedy sequel EVER MADE (as I have seen written elsewhere), because the movie did just come out this weekend and let's maybe sit on it a while before we immediately crown a movie KING OF ALL TIME. In a class where the bar has already been set very low, it is a very good, very funny comedy sequel. Maye we can all just be happy with that.

Posted by Patrick Bromley at 7:41 AM