Review: A Million Ways to Die in the West 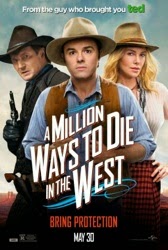 The internet has its knives sharpened for Seth MacFarlane, creator of Family Guy and American Dad! and whipping boy for critics who see both him and his enormous fan base as the Death of Comedy. MacFarlane is a vain, unfunny hack, they say, only interested in being in the Seth MacFarlane business.

He doesn't help matters by casting himself as the lead of his new movie, the western comedy A Million Ways to Die in the West. Sure, he played the voice of the sentient teddy bear in his directorial debut Ted, a surprise smash that was even more surprising for how not-terrible it was. While a generally mediocre movie -- it was overlong and had a disastrous final act -- that movie had genuine emotional stakes at its center and, more importantly, had a lot laughs. Certainly more than I expected.

It's with this in mind that I went in to MacFarlane's sophomore effort expecting little but open to the possibility of being pleasantly surprised. And while the movie has a couple of good laughs and one really good performance, it's otherwise pretty forgettable. In fact, it has a lot of the same strengths as Ted and only amplifies all of the weaknesses. 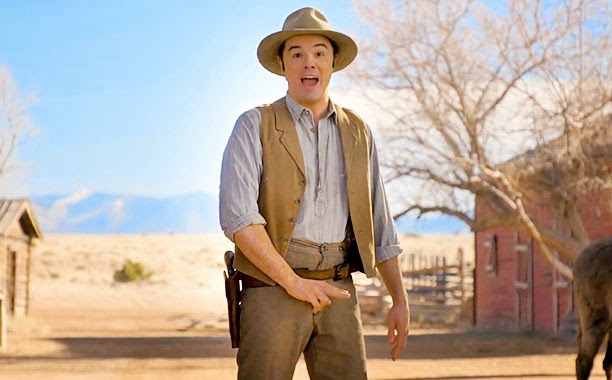 MacFarlane plays Albert, a sheep farmer living in the old West who hates the place, the period, you name it. He gets dumped by his girlfriend (Amanda Seyfried), who takes up with a proprietor of the local moustachery (Neil Patrick Harris) and makes Albert even more miserable. Things start to look up when beautiful stranger Anna (Charlize Theron) comes into town and takes an immediate liking to Albert, even offering to help teach him to shoot so he can win a gunfight and his ex-girlfriend will take him back. What Anna doesn't mention is that she's the wife/property of Clinch Leatherwood (Liam Neeson), the West's most notorious outlaw.

My hopes for A Million Ways to Die in the West were raised in the first few minutes with an opening credits sequence that's totally faithful to the westerns of the '50s; the score, the open vistas and even the way the titles dissolve into one another feels right. MacFarlane is a lover of the old school -- musicals and showtunes and classic Hollywood. I don't even watch Family Guy and I know that he does a Hope & Crosby Road To... episode every season. I got excited thinking that, if nothing else, MacFarlane would do his best to pay tribute to the look and feel of old westerns. Unfortunately, all of his formal interests are abandoned after that opening sequence and the movie starts looking like every other point-the-camera-and-shoot comedy that comes out of Hollywood these days.

It's symptomatic of a larger problem, which is that the movie is unable to commit to anything for an extended period of time. I've seen a few episodes of Family Guy and it has similar ADD issues, but they manifest themselves in different ways; A Million Ways doesn't feature a bunch of cutaways or shoehorn in a bunch of jokes regardless of whether or not they're right for the character (actually, people who don't like Family Guy should see A Million Ways to Die in the West as evidence that MacFarlane is capable of doing something different, even if the movie doesn't work). The movie will have an idea that might be interesting or have comic potential, then give up on a few minutes later, usually for something lesser. Sometimes, Albert is an anachronistic observer (seriously, MacFarlane couldn't have at least changed his hairstyle?), other times we're meant to believe he really is just an old west sheep farmer. Sometimes the movie wants to be an anything goes comedy, then it will go for looong stretches without any jokes and focus on just its (thin) plot. There's too little consistency. Even the joke about all the ways people get killed in the old west is abandoned early on -- and have all been given away in the movie's marketing. 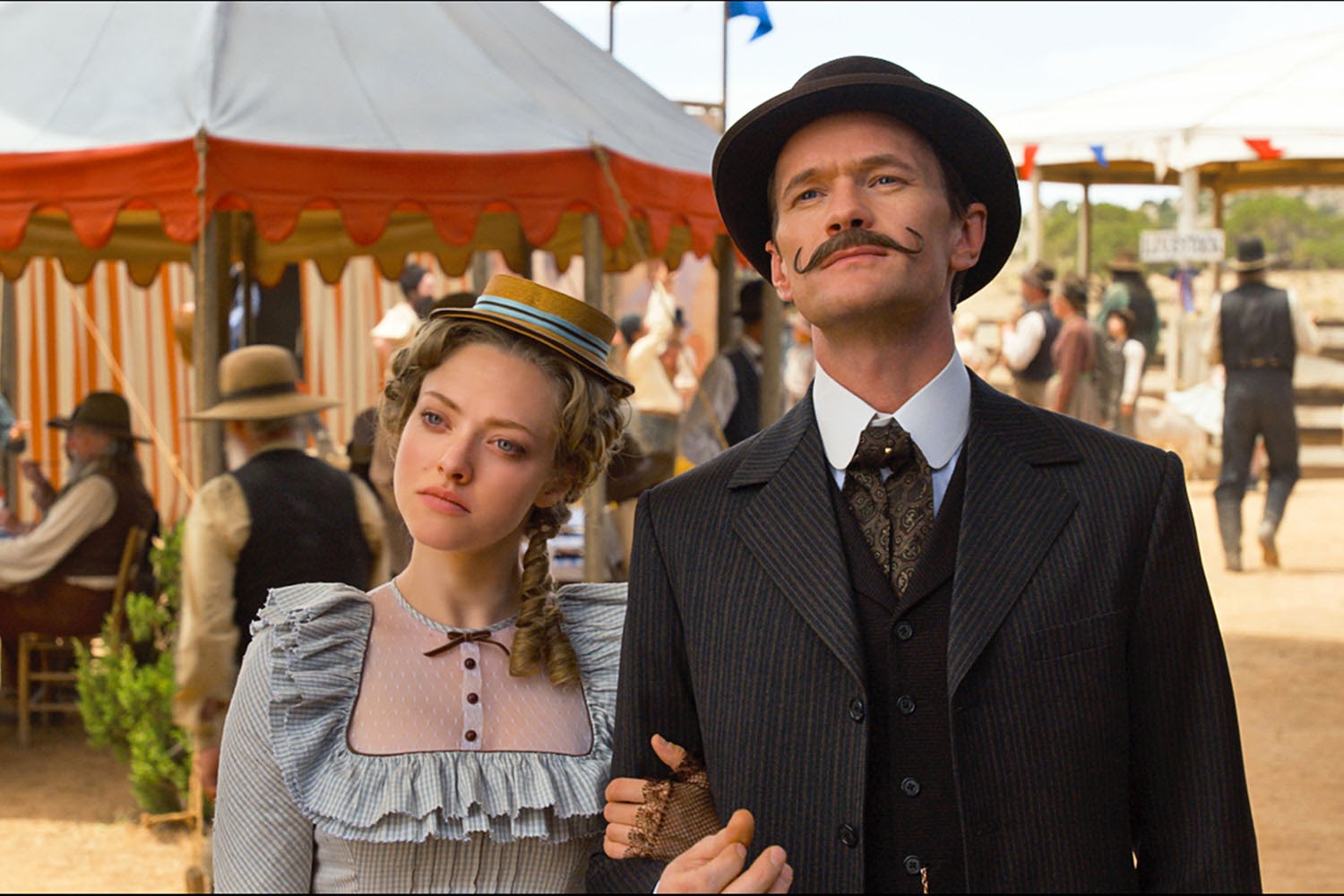 If A Million Ways to Die in the West has a fatal flaw, it's the length. At just under two hours, the movie is probably 30 minutes too long. The extra padding has a number of detrimental effects -- it spaces out the jokes too much, it makes the movie drag when it should be clipping along and it puts too much emphasis on the story, which calls attention to the fact that the story isn't terribly strong. For as inconsistent as MacFarlane (working with co-writers Alec Sulkin and Wellesley Wild) can be, there is one thing in which A Million Ways to Die in the West never loses interest: repetition. There isn't a story beat that gets taken care of in the span of a single scene -- every moment has two or three or even four scenes devoted to getting one idea across. Even some of the good jokes get beaten lifeless, like a gag about how no one smiles in old-timey pictures that gets brought up so many times it's no longer funny and eventually becomes a plot point. With 25-30 minutes of dead weight shaved off this movie, I really think we'd be talking about it differently right now (and even more so in five years).

MacFarlane is a problem at the movie's center. He has a good voice and he's handsome enough, but in a plastic, inexpressive way. He's gangly in a way that goes beyond creating an awkward character -- in short, he's not really leading man material. He's helped a lot by Charlize Theron, who is allowed to just play a sweet, warm human being (though critics cheering about how she's never done that have clearly never seen 1997's Trial and Error, a better movie than this). She has a relaxed confidence on screen that sells the material and helps compensate for some of the occasional flop-sweat desperation. The rest of the cast is largely wasted; Neil Patrick Harris is funny, but Neeson is only menacing and Sarah Silverman (playing a prostitute who won't have sex with her boyfriend because she wants it to be special) just gets to say dirty words in her usual adorable voice. If you want filthy language to sound shocking coming out of a pretty actresses' mouth, don't cast Sarah Silverman. That is what she is known for. We've all come to expect it. 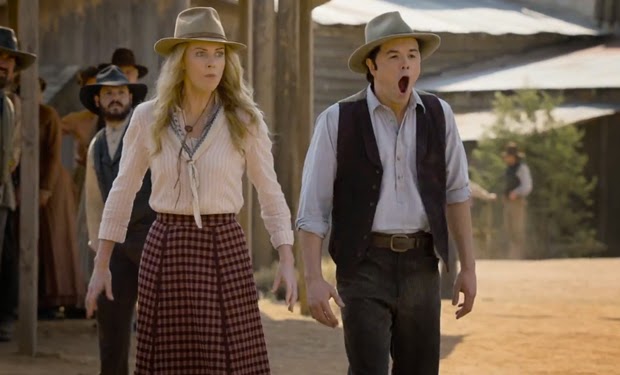 A Million Ways to Die in the West is the kind of movie that has just enough good things in it to make the bad stuff stand out more -- you watch it wishing MacFarlane had committed more to the old western aesthetic, or that there would be more jokes like "pieces of shirt!" and fewer like MacFarlane getting peed on by a sheep, complete with insert shot of sheep dick. It should be applauded for having a lot of jokes, even if they fall flat or repeat themselves or it feels like there aren't enough because the movie includes so much non-joke padding. But after sitting through a few summers of movies like The Hangover Part III and whatever Happy Madison decides to shit out, it's nice to see someone remember that comedies should have jokes. Better jokes would be even more an improvement.

It's a little weird approaching a review from the perspective of what a movie is not -- namely, that it is not the worst movie of the year. It's not even the worst movie I saw this week. But the disadvantage of running reviews after all the other critics have had their say is that you wind up reacting to both the movie and the general consensus, especially in a case like this when the general consensus seems to be that MacFarlane should stop trying and is the enemy of comedy. I didn't particularly like A Million Ways to Die in the West, but I laughed a couple of times and can at least appreciate that MacFarlane tried to make a comedy western. He didn't have to. There is such a number of awful comedian vehicles he could have copied (Seth MacFarlane IS Good Luck Chuck) -- or even a Family Guy movie -- that we should at least recognize some degree of ambition, even when he still has a long way to go as a filmmaker.
Posted by Patrick Bromley at 11:53 AM