Just like the ones your Uncle Darrell wore to the last family reunion, these shorts are legendary.

Ah, shorts! There’s nothing like them, particularly the animated kind that used to be a staple of the theatrical experience. I’ve been diving deep into the hundreds and hundreds of cartoons that Hollywood cranked out in the years before 1960 and that made up a big chunk of my childhood (not before 1960). I’m talking about Walt Disney’s creations (Mickey, Donald, Goofy, etc) and the Looney Tunes (Bugs, Daffy, Porky), but I’m also talking about all the theatrical cartoons that came before, during, and after those legendary Disney and Warner Brothers shorts that go underappreciated: Woody Woodpecker, Droopy, Popeye, Betty Boop, Felix the Cat, and a whole host of other cartoon stars who were icons when cartoons reigned at the cinema for a solid thirty years.

These classics are absolutely amazing and have deceptively simple plots that hide nuances and subtle humor behind the throwaway gags. In reality, most of them are actually so layered that they hold up to being studied for what’s within them and picked apart to reveal an incredible depth. I enjoy all of these shorts, but the cartoons I’m most interested in are the ones from the 1920s and 1930s, particularly the ones that came pre-code. There’s something oddly satisfying about seeing Mickey Mouse chug a beer or leer at Minnie’s legs.

Sometimes I delude myself into thinking that those early days of film were a more innocent time, but the film tells a different story. In addition to the broad slapstick humor and pratfalls found in most of them, many early animated shorts that played for general audiences were full of innuendo, dark comedy, delightful absurdity and silly surrealism. Even though they were never JUST for kids, kids loved them, and now as an adult (if that is indeed what I am) I see them on a whole new level. 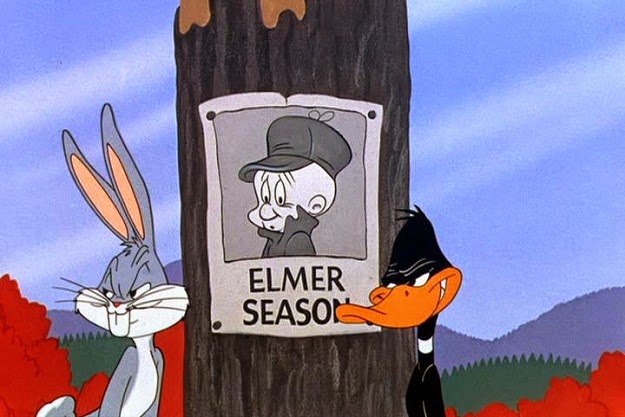 The thing that really surprises me about the early cartoons I’ve been watching is the level of truth and honesty that’s contained within them. Because you can do things in animation that you can’t do in live-action, and because comedy is often born out of darkness, you can really get a feel for how grim the first part of the 20th century actually was. I get a similar sense of history from old Charlie Chaplin films. Here’s a guy in rags, smoking old cigar butts and probably homeless, but he makes you laugh. It’s out of darkness that the best comedy seems to form. The anarchic animated scenarios that came out of the deep recesses of the animators’ minds during some dark times in American history are proof of that. I have the deepest respect for the minds behind these animated shorts and for the body of work that they’ve left behind. Here are just a few of my favorites.

The debt that the art of animation owes to Walt Disney is HUGE. Film historian and beard-representative Leonard Maltin says that Walt was in the right place at the right time. I suppose that’s true, but Walt also had a tremendous work ethic and entrepreneurial spirit that kept him reaching for the next level. After all, Steamboat Willie, which was most of America’s introduction to Mickey Mouse, was also the first cartoon synced to sound and that relied on a soundtrack to drive the gags home. Walt Disney was always embracing new technology and pushing the limits of what was possible. 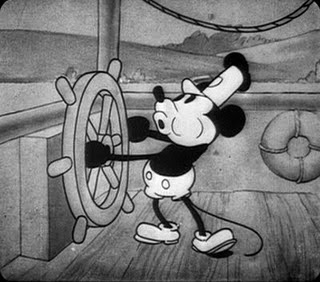 If you look at the leaps and bounds Walt’s animation team took in a relatively short amount of time, it’s hard to deny that there was something really special about the Disney work model. Look at Steamboat Willie in 1928 and then Snow White in 1937, just nine years later. Animation had gone from crude black and white line drawings to lush, full-color reality. It’s not a stretch to say that without Walt Disney and his creations of Mickey Mouse, Donald Duck, Goofy, and Pluto, we might not have ANY of the other animated classics from companies like Warner Brothers. As much respect as I have for the other creators, Walt was the pioneer who blazed the trail everyone else followed.

That shouldn’t in any way take away from the magic that the Warner Brothers animators and storytellers were creating. Tex Avery, Friz Freleng, Chuck Jones, Bob Clampett and a bunch of others did something that the Disney studio was NOT doing and told stories of a more darkly cynical and sinfully sarcastic nature. And man, did they ever set the world on fire. I particularly love the Warner cartoons that take the Hollywood stars of their day like Bing Crosby and Edward G. Robinson and caricaturize them. Can you imagine if someone did something like that today? If you went to the movies and saw a theatrical animated short with an exaggerated animated Angelina Jolie or James Franco? If you ask me, it’s just what we need. 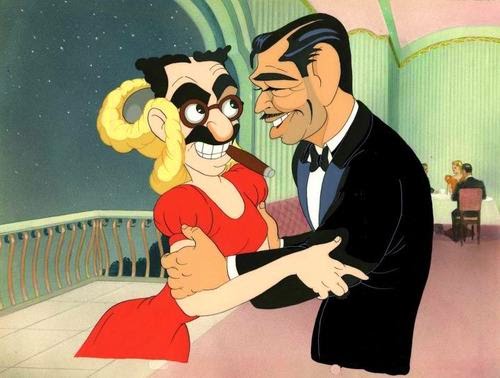 I’d be a jackass if I didn’t also send a bunch of love out to Mel Blanc for single-handedly voicing most of the characters from my childhood. This one man provided the voices for Bugs Bunny, Daffy Duck, Porky Pig, Speedy Gonzales, the Tasmanian Devil, Foghorn Leghorn, Sylvester the Cat, Tweety Bird, Yosemite Sam, Pepe Le Pew, and Marvin the Martian. It’s just unbelievable that his voice brought so many characters to life.

Over at MGM, you had Tom and Jerry (the brainchild of Fred Quimby, William Hanna and Joseph Barbera, though Warner’s Chuck Jones would later become involved), and at Universal you had Walter Lantz, who created Woody Woodpecker (originally voiced by none other than Mel Blanc before things went so sour that he sued Lantz) as well as some other characters like Andy Panda and Chilly Willy. Lantz also worked on the Walt Disney character Oswald the Lucky Rabbit after Universal took the character from Disney and arguably took that character to bigger heights and put him before more eyes than Disney ever did.

The work of Fleischer Studios is tremendously important. Founded by brothers Max and Dave Fleischer, this is the studio we have to thank for Betty Boop (who has made a comeback recently) and the animated adventures of Popeye the Sailor (who --much to the chagrin of Robin Williams-- has not). They also produced the legendary 17 Superman cartoons during the 1940s, which was so influential that Warner Brothers Animation copied the aesthetic and technique wholesale fifty years later with Batman: The Animated Series and then later Superman: The Animated Series and Justice League. If you go back and watch that original Fleischer work on Superman you’ll see just how incredibly fluid the animation is and how stunning the painted backgrounds are, not to mention the stunning use of light sourcing and shadow. 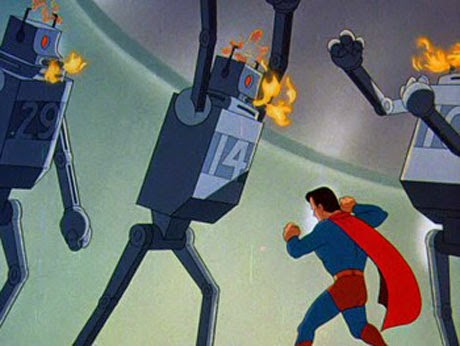 You can see how each studio had their own creations that they used in theatrical short films. The stiff competition during those prime Hollywood years has left behind a legacy of classic cartoons that have aged incredibly well and are still just as watchable today as they were a half century or more ago.

I feel like a lot of times when I write about things from the past (which is most of the time, it seems), I end up lamenting that the thing I’m talking about is gone or dying. Happily, that’s not the case with most of these cartoons. Within the last five to ten years, almost all of the cartoons from these major studios have been given beautiful restorations released unedited on DVD boxed sets with documentaries and commentaries.

Warner Brothers has been a champ when it comes to putting out the Looney Tunes cartoons. They did DVD sets for years and are about to release their third set of shorts on Blu-ray. Several Tom and Jerry collections have been released, and though some of the cartoons have been edited for content (which is a no-no, as far as I’m concerned) at least they’re represented on the home video market. 150 of Walter Lantz’s creations are available on very affordable Universal DVDs, Betty Boop is being released on Blu-ray by Olive Films, and all of the Fleischer Popeye the Sailor cartoons and Superman shorts have been available on both official AND unofficial releases for years. 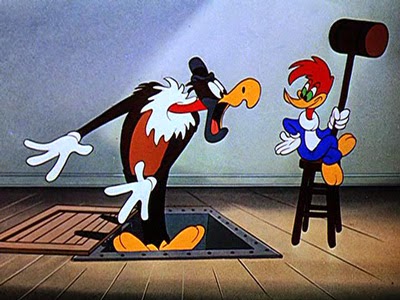 The real stinker here is Disney, who released their classic shorts years ago as part of the Walt Disney Treasures line. Those collections began in 2001 and ran through 2009, containing all of the Mickey, Donald, Goofy, and Pluto cartoons. Each set of two DVDs was housed in a commemorative tin, limited and numbered with a certificate of authenticity. They were AMAZING and I have a few of them (though not nearly enough) in my collection.

The problem is that they were so limited that they now command serious coin on the second-hand market and it appears that Disney has no plans on re-releasing these cartoons in the Blu-ray format, which is nearing the end of its life. The word on the street is that Disney is waiting until 2016 (when all of their animated feature films will have been released on Blu-ray) to launch some sort of streaming service that will have their entire catalog available on demand. That’s great if you’re Disney and want a lot of subscribers for your exclusive content, but it’s bad for those of us who just want to watch old Disney cartoons and have them on our shelves. Shame on you, Mickey. SHAME. Sometimes you make it hard for me to defend you, you silly mouse.

However, more good news: after languishing in obscurity for about ten years or so, many of these characters are finding their way back to audiences via new content. Both Disney and Warner Brothers have experimented with bringing cartoon shorts back to theaters (Disney’s Mickey cartoon Get a Horse!, which played before Frozen, is my favorite thing in a long time) and both studios are making sure the characters are visible on television. The Looney Tunes Show premiered on Cartoon Network in 2011 and that network once again started showing the full catalog of Looney Tunes classics.

Meanwhile, The Disney Channel has started showing new shorts (under four minutes each) featuring Mickey, Minnie, Donald, and Goofy between some of their programs. With a new, slightly irreverent attitude and some biting humor, it’s the best thing to come on that channel since Mousercise. Disney also uploads each cartoon to Youtube in an effort to increase awareness, which is a great move in today’s internet culture…but they still need to put them on DVD for coots like me who are stockpiling shiny discs for the oncoming apocalypse. 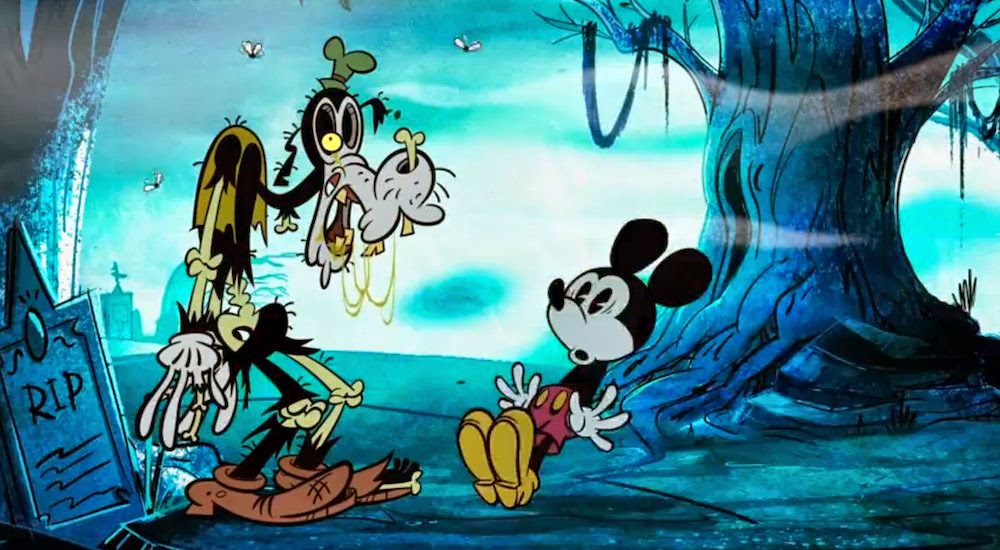 It’s comforting for me to know that the cartoons that I grew up loving are mostly (I’m looking at you, Disney) more available than ever before and have lost none of their charm over time. Once upon a time you couldn’t go to the movies without seeing a cartoon featuring these characters; the theatrical experience is morphing into something new and different, and I hope that whatever it becomes allows for the return of animated shorts. We need them now more than ever.

Do you have a favorite classic cartoon? Tell me about it!
Posted by Patrick Bromley at 12:00 PM