This July, I will be what Werner Herzog would call a “soldier of cinema.”

Seeing a movie in a theater for 31 straight days is a ludicrous undertaking, but before I continue I would be remiss not to acknowledge that this has been done before FOR A YEAR! That journey is chronicled in the book A Year at the Movies: One Man’s Filmgoing Odyssey by Kevin Murphy. But he’s not Adam Riske so, yeah, read my account instead!

Why am I doing this? That’s a good question. I think some of it has to do with boredom. Another part of it is after returning to video stores for 30 days last summer, I was looking for a new summer movie challenge. Or perhaps I just wanted to destroy my life and love of movies. That last part is a joke. I think. We’ll find out as the month progresses. In any event, I’m hoping this experiment will make for an entertaining and interesting series of Riske Business columns. This experiment will be the focus of my non-review writing for the next five weeks. I hope you enjoy it and I encourage your comments and suggestions as I go along. My journey will include attending the Music Box’s 70mm film festival, visiting an array of mom & pop stand-alone theaters with gimmicks like having a connected deli or a soda fountain, buying the most expensive movie ticket I can find at one of those rich people theaters and going back to the movie theater I went to all the time when I was in college at Indiana University (I’m visiting the campus as a trip of nostalgia after graduating 10 years ago). If you have a request such as “Go to a drive-in,” I’ll take it under advisement and will probably do it if it’s not something goofy, dangerous or expensive.

My goal with these columns is to not only discuss the movies I am seeing and provide my opinion of them, but to also put you in the brain of someone conducting this experiment and detail what it is like for an avid filmgoer.

This first column will cover the first six days of the challenge.

Note: In prep for this undertaking, I did not see a movie in theaters for 10 days leading up to July 1st. This was my palette cleanse before the Scarface mound of movies I snort throughout all of July.

The first night was a bit of a chore. After work, I had dinner with my parents and I had to rush out of there to go catch a movie before it got to be too late in the evening on a work night. Luckily, the movie I saw made it all worth it. I loved Begin Again. And this is coming from someone who didn’t enjoy Once. The music in the movie is catchy and the lead performances from Mark Ruffalo and (especially) Keira Knightley are charming and interesting. Knightley can definitely sing. I recommend everyone check this movie out. I found it involving and supremely charming.

Don’t you just love the feeling you have after seeing a movie that connects with you? On my way home from Begin Again, I listened to the radio and felt lifted up. A good movie makes music sound better and compels you to start singing. You just want to get home to post on Twitter or text friends that the movie you just saw was something special. This was a great way to start my 31 day challenge.

Note: Before the movie, I saw the trailer for The Hundred-Foot Journey. It looks terrible, but now I cannot stop saying “I will turn the music down, but I WILL TURN THE HEAT UP!!!!” 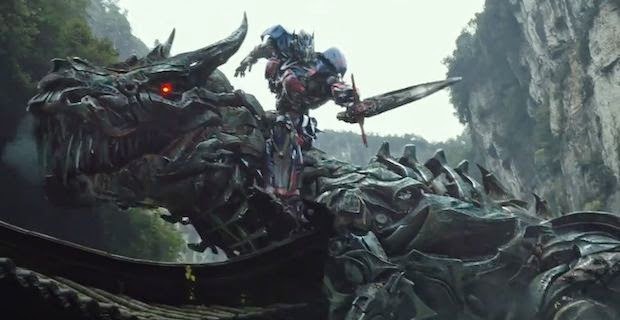 It was inevitable. When you have to fill up 31 days worth of movies, you’re going to see things you ordinarily wouldn’t see. In that spirit, I saw Transformers: Age of Extinction. I felt like a sellout, but in my defense I purchased a ticket for Edge of Tomorrow and snuck into Transformers. They’re not getting my money.

To my surprise, I didn’t hate the movie. In fact, it’s probably the second best in the series after the original. I didn’t enjoy it, though, so don’t get confused and think this is a recommendation. It’s way too long and pretty boring. However, the comic relief is cut way down and the robots are easier to tell apart this time. So, you know, progress or something. One thing worth noting is that I saw the movie directly after work and seeing a movie in your business clothes sucks. I was antsy the whole movie because I didn’t want to be in a dress shirt and dress pants any longer. So I took them off. 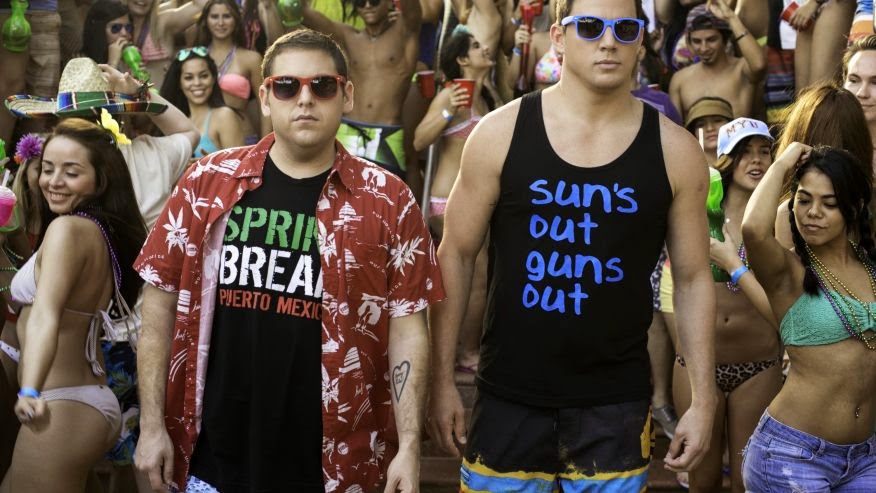 Going into day three I was pumped. The experiment was going pretty well and I was in the mood the see a movie. So I went to see Tammy. I made it one minute into the movie and thought “Ugh, I don’t like Melissa McCarthy” and left. Needing to call a quick audible, I went into the theater showing 22 Jump Street and saw that again. This was the first downer of the challenge for me.

Being that the theater was nearly empty and I was sitting in the back, I decided to text myself my thoughts to put into this column for later. Here’s what I wrote:

“What am I going to see all of these days?” 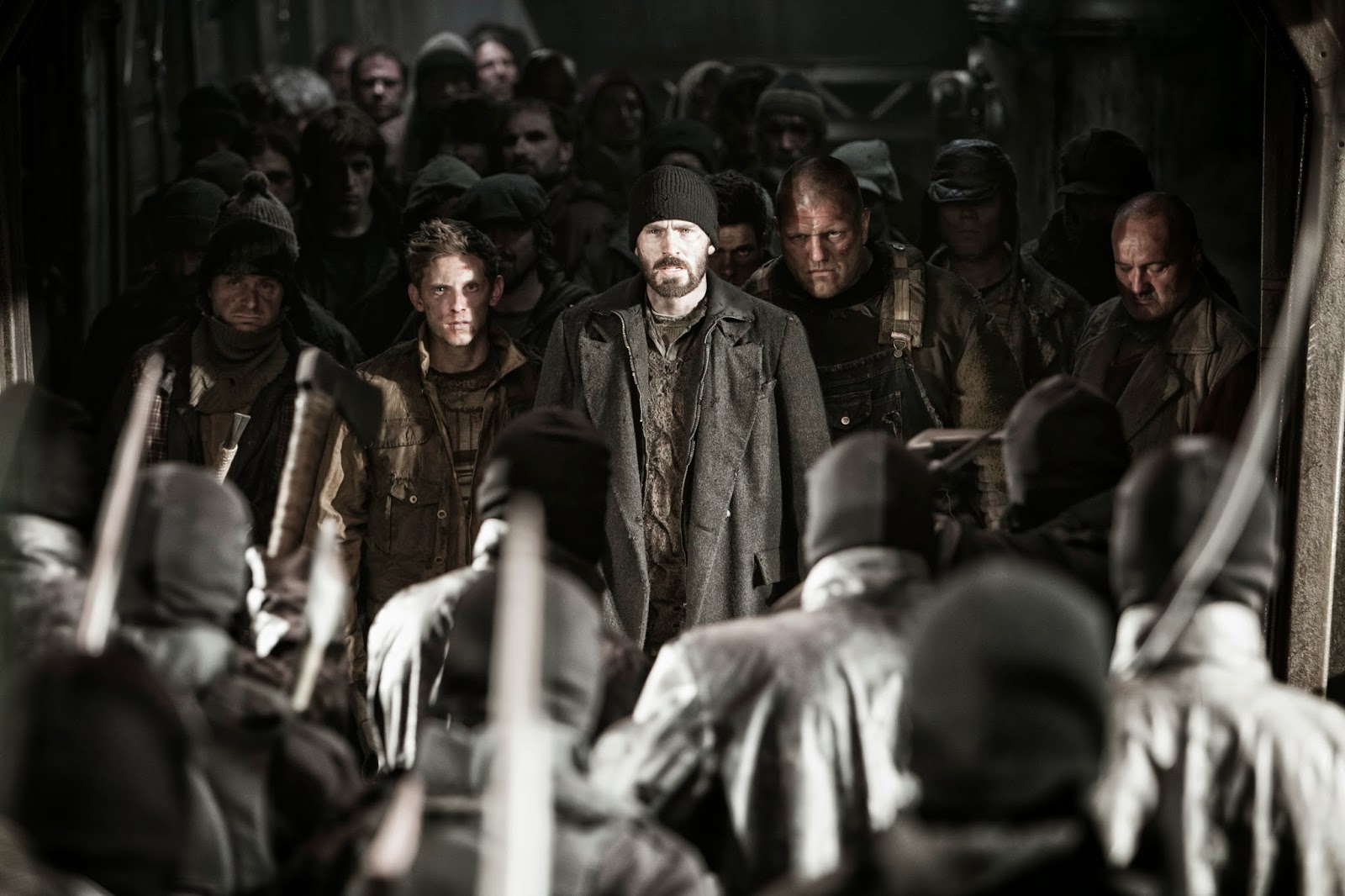 Snowpiercer rules, so day four was a treat. Plus, unplanned by either of us, Patrick Bromley showed up at the same screening I was at! Seeing a movie with Patrick is a treat because he’s just like he is on the World Wide Web. He sits with a seat between you because he is afraid of cooties, but he’s making progress. When I first started going to movies with Patrick, he would sit in the same row but 10 seats away. Over time, he moves closer and closer. Before Snowpiercer, he took his seat and said to me “Earn this.” He’s the best.

I was on a movie high after Snowpiercer which is simply great, imaginative science fiction. It’s exciting, interesting and fresh. Definitely seek this movie out. Man, is it great to see an awesome action movie on the 4th of July.

Note: Before Snowpiercer, I saw the trailer for A Most Wanted Man for the umpteenth time. I love Phillip Seymour Hoffman’s accent in that trailer especially when he says Bearrrr-rrra-coooo-daaaa.

Four days in and I’m doing fairly well. Having two out of the first four movies be really good certainly gave me the boost to keep going. But on the fifth day, I hit a wall and felt like quitting for the first time.

I decided for day five to knock out my movie as early as possible by seeing a midnight show of Aliens at the Music Box Theatre. Unfortunately, not knowing how traffic would be after the fireworks on the 4th of July, I left my apartment way too early and got to the Music Box around 10:45pm. Shit, I’m going to have to kill time for at least 45 minutes, which means walking around Wrigleyville alone. So I did. I got to see many DIY fireworks shows by the twentysomethings of the neighborhood. It was fun and also a little tiring. Try walking for 45 minutes and then being in the mood to see a movie. It’s tough.

So I sat down for Aliens and immediately felt groggy. I felt a walkout in the works. Fuck. How should I count this? Does it continue the streak? Or if I bail does that mean I can’t count the movie for day five?

The print for Aliens was cool. It was all beat up and scratchy like a grindhouse movie. Unfortunately, that wasn’t enough and I fell asleep in the theater. After 90 minutes I woke up and walked out so I could drive home. Movie fail! I was going to have to do a make-good.

Later in the day I went to a single screen mom and pop theater called The Catlow, which is connected to a deli. The Catlow is an interesting place. It’s a theater that stayed open, when it was on the ropes in 2002, because of the release of My Big Fat Greek Wedding, which was so popular at this theater that it played for almost six months straight. Keeping that in mind, Chef PLAYED at this theater. It was like I was at the premiere or something. The people at The Catlow loved this movie. 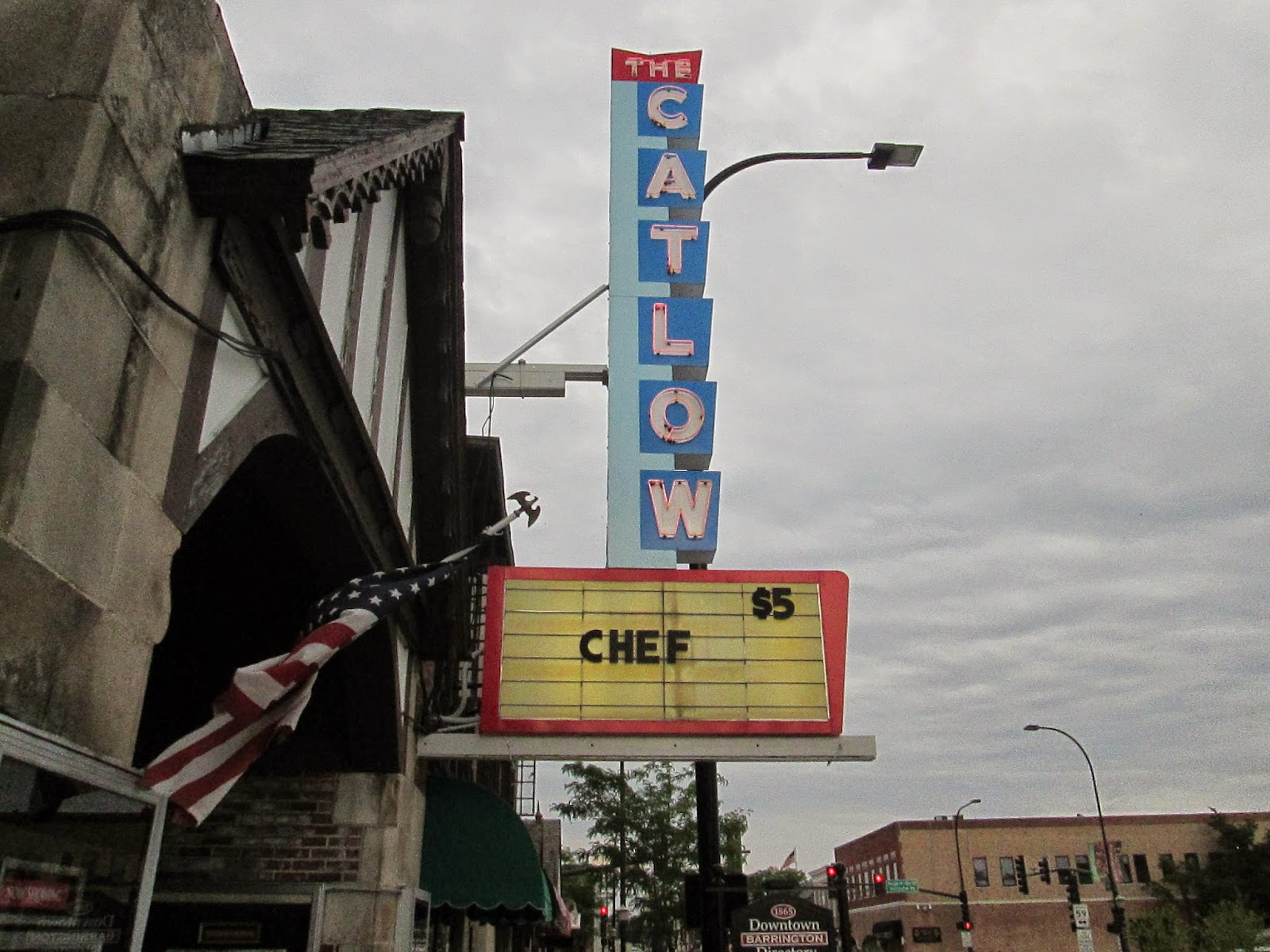 As for me, guess what happened? Yep, I walked out midway through. I was bored. I like Chef, but I don’t love it and I didn’t feel like watching it anymore after about an hour. Since I saw half of one movie (Aliens) and half of another (Chef), I’m counting this as a win for day five.

July 6
Movie: Deliver Us from Evil

I kept hearing about the iPic Theaters and how nice they are, so I decided to try one out for the first time for an early morning showing of Deliver Us from Evil. The movie itself is skippable. It starts out ok but gets tedious and less interesting as it goes along.

As for the theater, I was super impressed with it in some ways. First off, I was alone in the theater, so it was like having a private screening room with a butler service bringing me food. I felt like a rich person, so that part was great. Plus I got a pillow, blanket and a recliner to sit in. It was sweet!

The bad part about iPic (something I knew going in) is that IT IS a rich person’s theater. I got food and purchased a ticket and guess how much seeing fucking Deliver Us from Evil cost me? 58 dollars!!!!!

The experience was a blast, but it’s not worth $58 for one person. For $58, I should have two bathing girls feeding me grapes. For $58, they should offer a happy ending and I’m not talking about for Deliver Us from Evil.

The scariest part of the movie was when the servers snuck up on me in the theater to check if I needed more food. It was the sole jump scare of the experience. 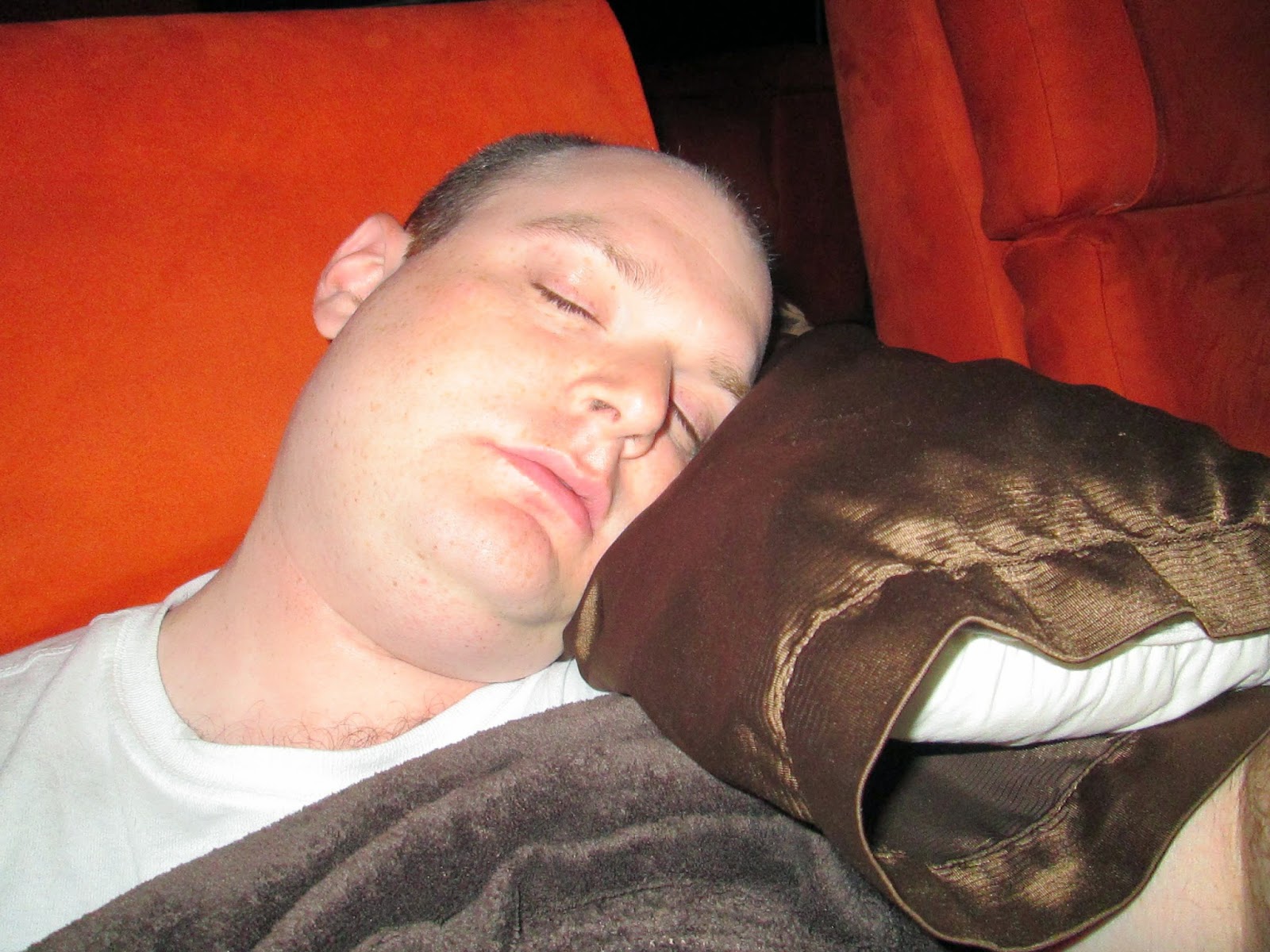 Note: Before the movie, I saw the trailer for If I Stay, which they should rename The Fault In Our Cars. I laughed out loud when Chloe Grace Moretz’s character, who is a cellist, opens her locker to reveal a sticker that says “I love Yo-Yo Ma”.

So, that’s it for week one. So far, so good. A couple bumps in the road but I’m not hating life.

Tune in for more next week.
Posted by Patrick Bromley at 12:00 PM