Drunk on Foolish Pleasures: A Few Things I Noticed Watching American Graffiti for the 100th or 101st Time

Thanks to ever-vigilant Adam Riske, I got to see American Graffiti last weekend—for free!

I was surprised when young Adam told me he had never before seen American Graffiti. We recently met up at the Portage, one of Chicago’s rep theaters, to catch a special screening. After calling attention to where we were seated in the theater, dancing around Adam, blowing an imaginary horn and shouting, “Virgin! Virgin! American Graffiti virgin!” I settled down to watch the film.

I have seen American Graffiti boatloads of times; I saw the original release in a theater when I was eleven. But I had never seen the film like this. There were enormous speakers stacked up on the stage from some concert the night before, blocking our view of the screen. The soundtrack had a loud buzz that made the dialogue nearly impossible to decipher for the first twenty minutes. The picture looked odd and the color palate was off—Paul LeMat’s car looked pink. 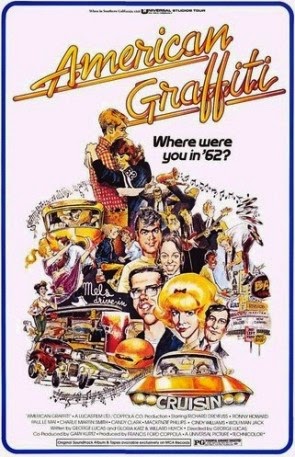 What (I hear you asking) made this whole experience bearable? Well, two things. First of all, the screening was free. We just walked in. No one asked us what we were doing. No one attempted to sell us tickets. No one asked to see our tickets. Sweet! Secondly, I’m becoming more convinced that Adam and I are movie addicts, and these “screenings,” in increasingly sketchy “theaters,” are taking on the look and tone of AA meetings. A recent (sad) screening in the empty, daylit, over air-conditioned auditorium of Carl Shurz High School confirmed this. We’re hooked, baby.

As I am wont to do at these classic screenings, I began to excessively ruminate on aspects of the film that I have not previously noticed. To wit:

1)    The madras shirt that Richard Dreyfuss wears through the entire film is the exact color and pattern of a pair of shorts I have been looking to buy for the last two summers. 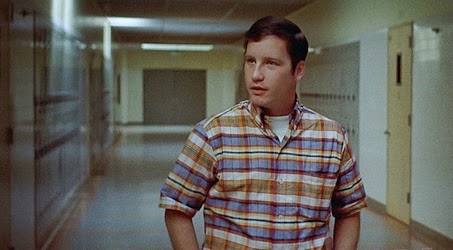 2)    In one iconic scene, Dreyfuss places a thick cable around the axle of a police car, trying not to be noticed by the two officers inside. For the first time, I noticed that director George Lucas uses the sounds of trains in the distance for suspense. This sequence is very much like young Al Pacino preparing to kill Al Lettieri and Sterling Hayden in Lucas mentor Francis Ford Coppola’s The Godfather from two years previous. Aha! 4)    Many critics have commented on how American Graffiti benefits from having wall-to-wall early rock music blasting from car radios; the music serves as a kind of Greek Chorus to the proceedings. I have always found some of the song selections a little on the nose (for instance, “Goodnight, Sweetheart” by The Spaniels as everyone says goodbye at the end). This time through, I was struck by how well the music matches the film’s diurnal cycle of day to night to day. Someone put a lot of thought into the mood, tempo, and effect of each song in terms of the film and its narrative rhythms.

5)    The strange, low-budget nature of the ending made we wonder if it were all a dream. We fade in to the airport, but we see no airport or terminal, just a couple of random propeller planes on the tarmac. The only people we see are the people there to see Kurt off: no ground crew or pilot, just the single stewardess who shoves Kurt through the door. Inside the plane, we see no other passengers. Could Lucas have meant for this now-iconic ending to be the dream of a character who never really goes “back east” to college? And did I just blow your mind? Final bit of evidence: the side of the plane reads “Magic Carpet Airlines.” Aha!

6)    By the way, in my dream-ending version, a drunk driver does not kill Paul LeMat, and Charles Martin Smith does not die in Vietnam. Most importantly, Richard Dreyfuss definitely does NOT go on to star in a film that everyone would say “reminds them so much”… of ME: