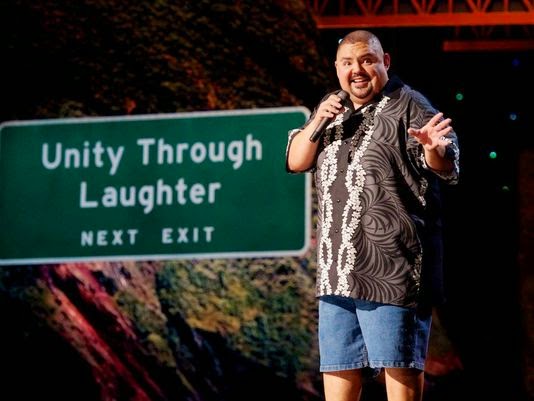 I wanted this challenge to end in a special way -- a week of great movies or cool experiences. Unfortunately, planning for something like that can be challenging. So tonight I eventually grew tired of racking my brain for the perfect movie to watch and saw The Fluffy Movie, because fuck my life.

Tonight was one of those nights where I was physically in the theater but absolutely mentally checked out. I knew I was in deep shit when I saw the trailer for Into the Storm for maybe the 12th or 13th time this month, so I broke out a crossword puzzle and started working on that. Forty minutes later (while The Fluffy Movie played on), I finished the crossword puzzle and then I shut my eyes. I listened to The Fluffy Movie but probably only looked at the screen for 50 percent of it. It was not funny. Gabriel Iglesias seems like a very nice man but I did not laugh a single time. Sorry, Fluffy.

Monday nights are the worst nights for this challenge. By Monday night, I’m tired from being at work all day, I’ve seen everything I wanted to see over the weekend and I know I have to suffer through Tuesday and Wednesday until the new movies are released on Thursday. In fact I dread Mondays so much now that I might never see a movie on a Monday again. 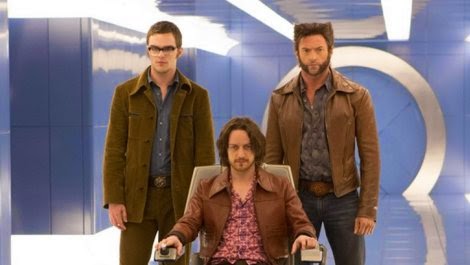 After the drag that was last night, I knew that I needed to find a way to cheer myself up and make this night special. So, remembering how much fun I had theater hopping at the dollar theater earlier in the month, I decided to do a mega-hop. A movie buffet of 30 minutes or so each of five different movies. It was not as much fun as last time. Maybe it’s because I pulled it off last time and there wasn’t that danger element of getting caught. I don’t know.

Million Dollar Arm was somewhat more watchable than I thought it would be (of what I saw). Blended...OMG, Blended. I will say it was better than Sex Tape, but yeesh! I enjoyed X-Men a bit more than I did when I saw it as my birthday movie. The movie is very self-serious, so I remember back around my bday I was like “This isn’t fun; I want my birthday movie to be fun.”  Away from that pressure, the movie seemed to improve. I’ll be catching up with this one again on Blu-ray. I am the only person on Earth who thinks A Million Ways to Die in the West is a decent movie with many laughs. As for Godzilla, I timed it so I could see the money shot during the ending brawl. One thing I realized from theater hopping at the dollar theater is you are chasing moments more than having the mindset of seeing the movie again. It’s like flipping channels when the movies are on cable. 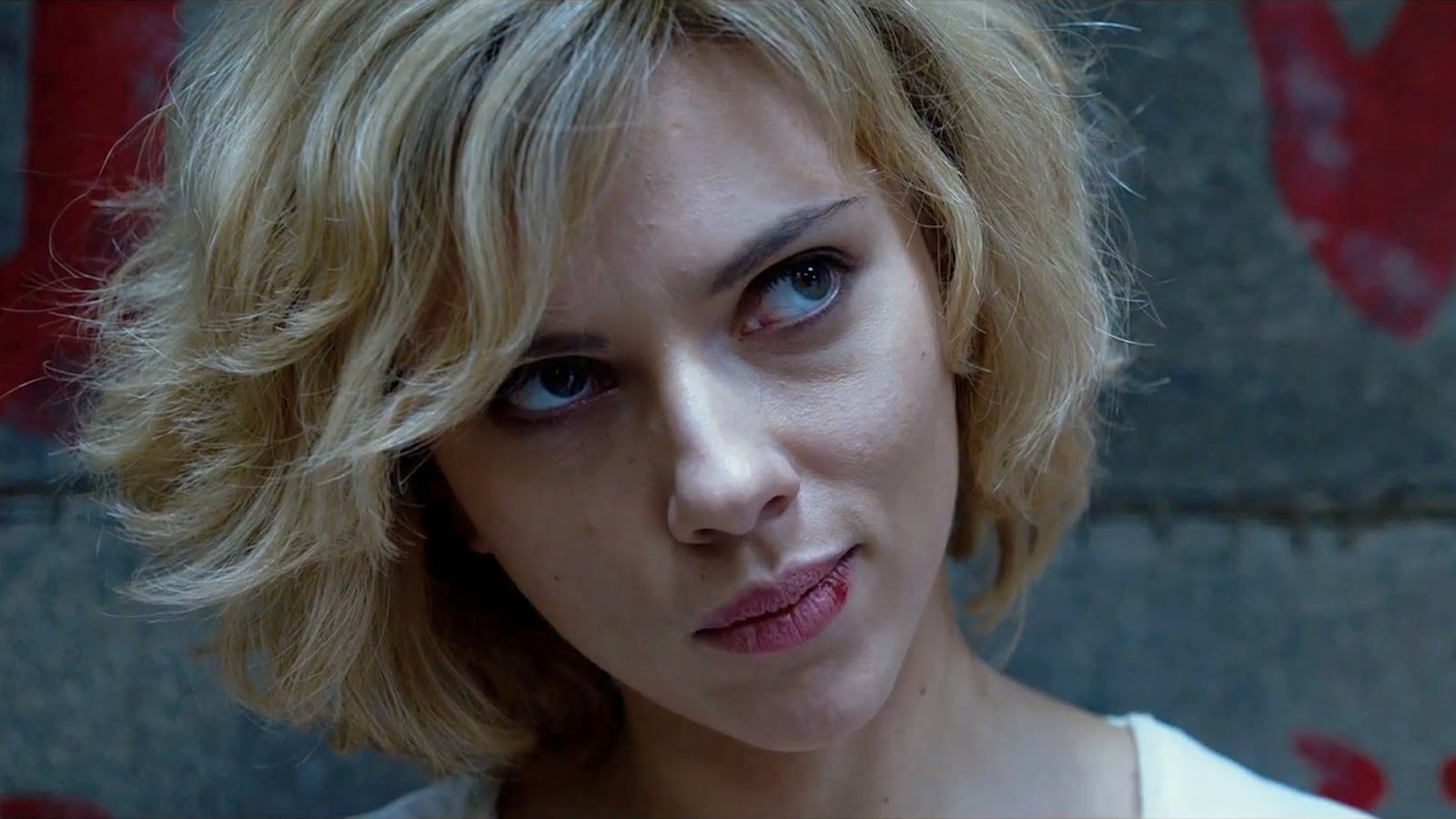 Between work and going to the movies every night I feel like I have two jobs. I’m exhausted. I don’t even care what I’m seeing anymore. So I went to the movie theater restaurant that’s a minute from my house to have dinner. I had dinner at Lucy’s tonight. It was all about the meal. I could care less about what movie I was watching.

I think I’ve completely come around on movie theater restaurants. Even the clopping feet of the waiters rushing up the stadium seat steps seems comforting to me now. I think the key is that the one by my place is never crowded. What do you all think? Do you like these types of theaters?

As for Lucy on the second viewing, I still like it! I can’t convince anyone they’re wrong for not liking it but whatever, it works for me. I feel that I have to apologize in advance because I’m sure that Guardians of the Galaxy is going to be a movie many people will love. I am not one of them. I was disappointed.

My disappointment was over a few things: 1) The movie itself, which I’ll get into in a second; 2) I wanted to end this challenge with a bang and specifically planned it out so I could see Guardians on the last day 3) GotG was the movie I was most looking forward to over the summer and 4) This is the movie where I learned I might just be more of a fan of Super than I am of James Gunn in general.
Guardians of the Galaxy is the nerdiest movie I’ve seen in a long time. The trouble is, as much as I want to be nerdy, I’m just not. I was bored during certain stretches of Guardians, I didn’t laugh at any of the jokes (which I think are poorly timed in combination with the action) and it felt busy, like it had no room to breathe. For example, there is so much stuff happening with ships and other jazz that I felt like I was watching the opening of Revenge of the Sith for two straight hours. I didn’t hate the movie. I liked the performances and it was sweeter than I thought it would be but I wanted to love GotG and I know in my gut that I didn’t.

So the end of the challenge was a bummer, but hey, I made it! As the end credits rolled on the last movie, I paused to live in that moment and let it sink in what I had done this month. It felt like after you graduate from college; when your stuff is packed up and you’re just sitting around waiting to go home. •    Biggest Disappointment(s): Realizing I’m not much of a Godzilla fan and not loving Guardians of the Galaxy (again, sorry everyone)
•    Favorite Experiences: Seeing Jaws in a theater with many people who had never seen it before, the enthusiastic crowds of It’s a Mad, Mad, Mad, Mad World and Big Trouble in Little China at the Music Box Theatre
•    Favorite New Movies from the Challenge: Begin Again, Snowpiercer, Boyhood
•    Least Favorite New Movies from the Challenge: Sex Tape, Wish I Was Here, The Fluffy Movie
•    Most Expensive Trip to the Theater: $58 for Deliver Us From Evil at the Ipic Theaters.
•    Most Fun: My initial dollar cinema theater hop
•    Not Very Re-Watchable: 22 Jump Street, The Fault in Our Stars
•    Number of Days I Didn’t Want to Quit: 16
•    Number of Days I Wanted to Quit: 15
•    Number of New Movies Seen: 15
•    Number of Times where I was the Only Person in the Theater: 1
•    Number of Repertory Movies Seen: 8
•    Number of Re-Watches: 10
•    Number of Times People Talking Spoiled a Movie Experience: 5
•    Re-Watchable: Edge of Tomorrow. Life Itself, Obvious Child, Chef, Lucy
•    Saddest Experience: Seeing a shitty copy of Pretty Woman in a nearly empty (and huge) theater, the suffocatingly negative worldview expressed in The Purge: Anarchy
•    Scariest Experience: Almost hitting a deer on the way back from Dawn of the Planet of the Apes
•    Weirdest Experience: Couple dry humping before Think Like A Man Too

What’s Next?  Getting back to normal.

I went back to a theater on August 2nd  (I saw Get on Up – it was not good) and I honestly felt like going to a movie on August 1st. It was tough not to go. Once the pressure of knowing I HAD to go was gone, going to the movies seemed fun again. As much as I thought I would go to movies less, I’m surprised to figure out that I think I’m just going to return to my normal rate of seeing movies in the theaters which is about twice a week. I’m not going to miss Let’s Be Cops! Or The Expendables 3!! Plus, if I go less then I can’t really be in the conversation, most of all with you guys. I’m not giving that up. It’s too much fun.

Here’s what I learned from The Challenge (in no particular order):

1.    Going to see a movie right away is your best bet for seeing it with an audience that will behave themselves. They are there right away because they want to see the movie just as bad as you do.
2.    Movie Theater Restaurants are not the devil. In fact, they are fairly comfortable and pleasant.
3.    Theater hopping is a symptom of you losing your groove for going to the movies. You should go less if you find yourself hopping. Learn to appreciate the experience again through withdrawal.
4.    If you’d rather do a crossword puzzle than watch the movie, you didn’t want to see the movie. That should be your barometer if it’s worth the trip to the theater.
5.    There is nothing like the magic of an enthusiastic repertory screening crowd.
6.    Seeing movies with friends is always more fun than seeing a movie alone no matter how good the movie is.
7.    I don’t like Godzilla and I’m not a nerd no matter how hard I try to fit into nerd cultur
8.    Woody Allen movies attract old assholes like honey to bees.
9.    Don’t rewatch a movie for at least a month after seeing it. Let it breathe a bit, you’ll enjoy it more when you revisit it.
10.    Don’t go to movies tired. It’s pointless.
11.    There’s no way to avoid talkers. They will find you and sit in the same row or behind you no matter what you try.
12.    D-Box is one of the most useless inventions of the 21st century.
13.    The Fast and the Furious arcade game should be easier on the Easy level. I can’t steer!
14.    Dollar theaters have a romanticism to them. They make you feel like you’re from the future and only you know what’s going on with these movies.
15.    I shouldn’t walk out of movies. Instead I just need to find something to appreciate.

Thank you all for reading and for your support!
Posted by Patrick Bromley at 6:00 AM

Email ThisBlogThis!Share to TwitterShare to FacebookShare to Pinterest
Labels: 31 days at the theater, godzilla, guardians of the galaxy, lucy, riske business, summer 2014, x-men days of future past