How do the films Dr. Who and the Daleks and Daleks - Invasion Earth: 2150 A.D. stack up against the beloved television show that inspired them? And does this doctor have a Ph.D?

If you’re like me, you live for those few precious months each year when Doctor Who returns to television for another run of episodes featuring our favorite Time Lord and his adventures throughout time and space in his blue box, the TARDIS. The show is bigger (on the inside) and more popular now that it has been since the late '70s, when it peaked at 16 million viewers in England alone. Audiences all over the world now tune in to see what the renegade Gallifreyan will do each week.

Surprising, then, that The Doctor has only appeared in two theatrical feature films, and may not have even been himself.

By 1965, Doctor Who mania was sweeping England and had become a genuine phenomenon. The show had been on the air for a couple of years and slowly developed a loyal fan-base of both children and adults. Each week, the BBC show garnered between 10 and 14 million viewers, which was nearly a quarter of the United Kingdom’s population, so OF COURSE things like merchandising and licensing were in full swing in an effort to capitalize on the massive popularity of the show.

Enter the horror company Amicus, competitor of Hammer Film Productions. Amicus bought the rights to adapt three separate Dalek TV stories from the BBC and Terry Nation (the creator of the Daleks), for a only 500 pounds. That’s right, FIVE HUNDRED POUNDS. The idea was to shoot the films in color and in widescreen, giving audiences an experience that they couldn’t get by seeing the show on their tiny black and white television sets. Fearing that the Amicus label would turn away family audiences, the studio chose to call themselves AARU productions for these films only. 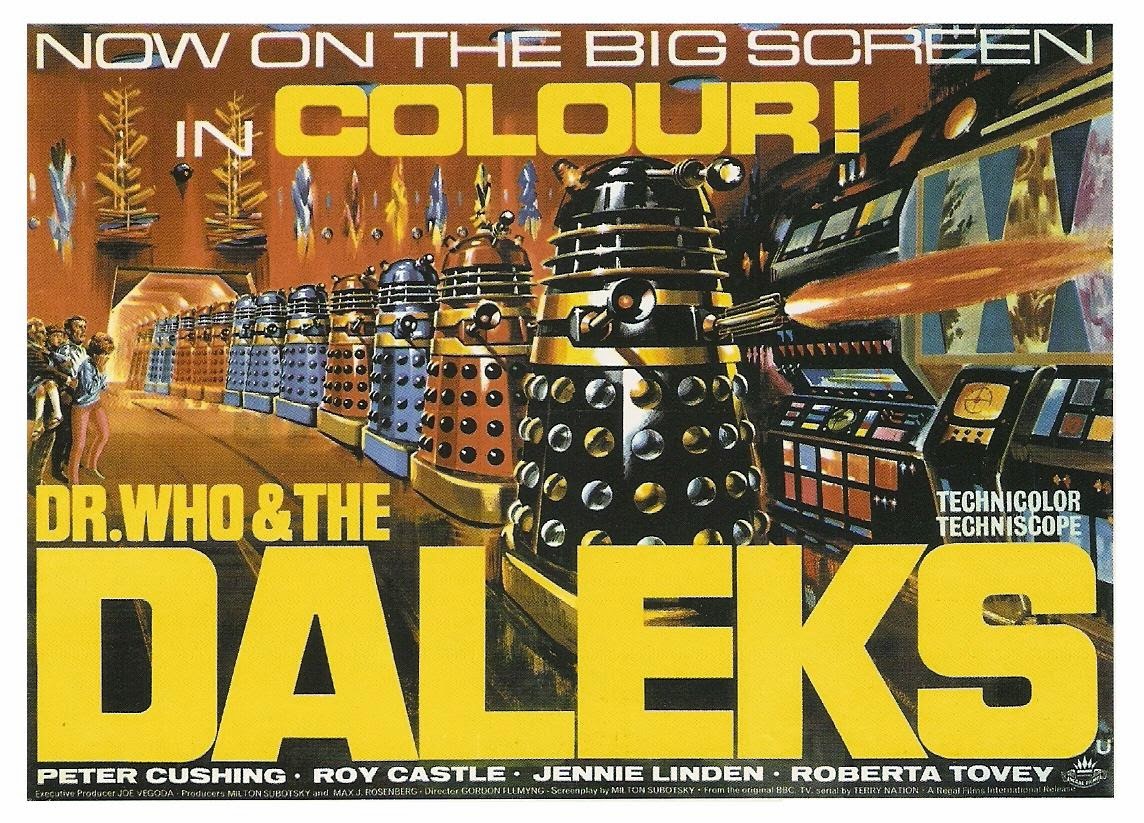 The first story that they adapted was the second Doctor Who serial ever aired, called The Daleks. This was the era of the First Doctor, William Hartnell, and the thoughts of any sort of regeneration into a different actor were at least a year away. Hartnell was an older actor and played The Doctor as a sort of intergalactic grandfather, so steps were taken to replicate this on the big screen. Peter Cushing, the Hammer actor who breathed life into horror characters like Van Helsing and Dr. Frankenstein, was tapped to play The Doctor in the Amicus/AARU films.

It was here that things started to get tricky. Peter Cushing’s character was not “The Doctor,” alien traveler through time and space in his stolen machine; instead, he was the mustachioed, kindly old inventor Dr. Who, with Who being his last name. The substitution of “Dr.” for “Doctor” is important. Any hardcore fan will tell you that you NEVER use “Dr.” when discussing the Time Lord because “Doctor” is a name, not a title, and that seems to be why this decision was made for the films. I don’t think we ever actually find out what his first name is, but considering that this Doctor is 100% human, it’s likely something Earth-bound like Rick, or Howard. “Paging Dr. Who. Dr. Howard Who to surgery.” I can only theorize that the decision to have him be “Dr. Who” was made to make the movies more accessible for a wide audience. It’s odd, though, considering that it had been stated nearly since the beginning that The Doctor of the TV show was not a human and was of alien origin. Did most viewers not know this? Millions and millions of viewers tuned in each week during those years.

If you watch those early episodes of Doctor Who featuring William Hartnell, you’ll find that his companions during that first year were his granddaughter Susan (yes, granddaughter -- a decision that’s been causing headaches for fifty years) and the parental school teachers Ian and Barbara. Dr. Who and the Daleks has the old tinkerer building a machine that travels through time and space and accidentally transporting his granddaughters Susan and Barbara, as well as Barbara’s boyfriend Ian (Barbara and Ian no longer not being school teachers in this continuity) to the Dalek home world. Wacky shenanigans ensue, fun is had by all, and the companions have a chance to be heroes.

Production lasted six weeks, cost an estimated 180,000 pounds and the film was successful enough in Great Britain to green-light the sequel, Daleks - Invasion Earth: 2150. The second film was taken from the 10th serial of the William Hartnell era, broadcast at the end of 1964, which featured the Daleks invading London rather than The Doctor going to their ruined planet. It was that original and horrifying idea of Daleks invading the streets of London which had firmly cemented the evil cyborgs in the minds of the British public.

This time Barbara and Ian were out, and a niece was added (Louise) alongside the return of Dr. Who’s granddaughter Susan. Rounding out the cast was Bernard Cribbins as the policeman Tom Campbell. If you’re familiar with new Who then you recognize Bernard Cribbins as the excellent actor who later played Wilfred Mott, grandfather to Donna Noble, a companion of David Tennant’s 10th Doctor. If not, then all of this sounds like a bunch of gobbledygook to you and the phrase “he will knock four times” is meaningless. But if you know the role that Bernard Cribbins played in the life of the 10th Doctor, you know that the man is an incredible actor and is beloved by fans. Many actors have played multiple roles in the saga of Doctor Who over the last half-century, but Bernard Cribbins is a fan favorite. His appearance in Daleks - Invasion of Earth: 2150 is what makes the movie worth seeing more than anything else.

Because of the success of the first film, the sequel had an even bigger budget and was able to do things that the serialized television show could never have done, though many argue (myself included) that it’s a lot of sound and fury signifying nothing because the things that make Doctor Who so special as a series are largely absent from the film. It didn’t do very well at the box office when it was released in 1966 and times were changing for Doctor Who in general. By the time the film showed in theaters, William Hartnell had left the role and the grandfatherly First Doctor had regenerated into the cosmic hobo persona of the 2nd Doctor, as portrayed by Patrick Troughton. New audiences were being introduced to The Doctor as the TV show was moving on, and it didn’t make much sense to keep reveling in past glories. Plans for a third installment in the film series were scrapped and as Doctor Who established itself with a new, older audience as a provocative show with deep philosophical ideas and limitless possibilities, the two existing feature films faded from public consciousness.

Now for the autobiographical stuff: I first stumbled across these two films in 1995 or 1996. I was a hungry young Whovian, starving for more Gallifreyan action. Back in those days, the only real sources available for acquiring Doctor Who were 1) the video club from Columbia House where subscribers would receive a new tape every 6 weeks, 2) Suncoast Motion Picture Company at the mall, and 3) taping reruns on PBS, which were almost never shown in my area by the mid-‘90s. Amazon.com had just started and wasn’t really a thing yet while big box retailers only carried the most popular studio movies, not cult genre stuff. In between my six-week Columbia House fix, I would wander the aisles of Suncoast and browse the impressive collection of Doctor Who tapes, lusting over the box art of each $24.99 adventure. If I was lucky, I’d have enough money after my expenses to buy a new tape one time a month. 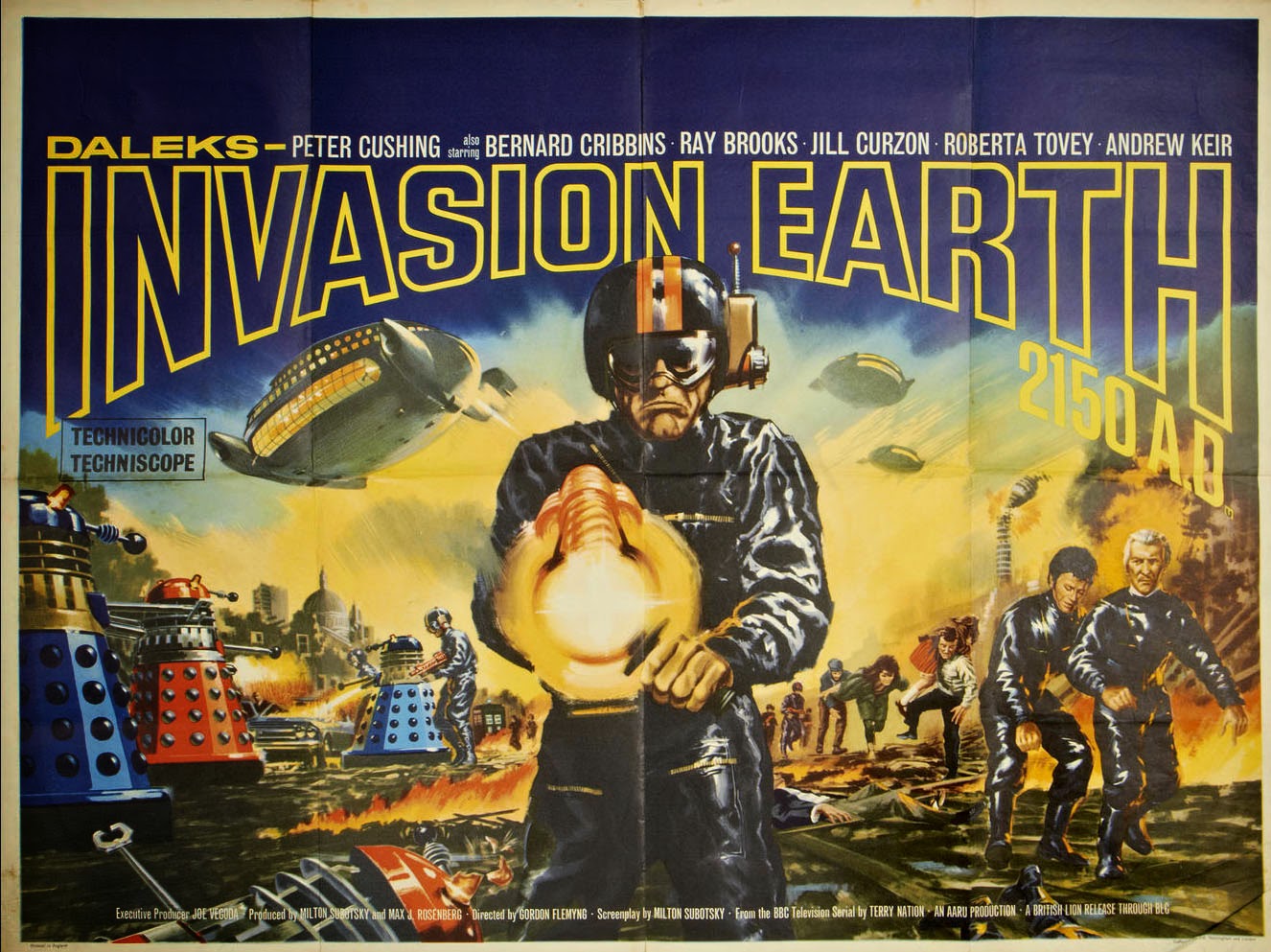 It was during one of these trips to Suncoast that I noticed two new tapes at the very bottom right corner of the Doctor Who shelf with Peter Cushing on the cover. I had no idea what they were, but the tapes were only $9.99 each, which meant that I could buy both of those stories for less than the price of one Tom Baker story. It was a no brainer, and later that night I fired up Dr. Who and the Daleks to abject horror. I had no idea what I was watching, but I was furious for wasting my money on something that clearly had no connection to the show I loved so much. He wasn’t even a Time Lord, he was just someone’s creepy old grandpa! Hell hath no fury like a young nerd scorned.

I was convinced for years that these movies had been made by some fly-by-night company in the ‘60s who just wanted to cash in on the popularity of Doctor Who. I suppose I was half right, but as I’ve gotten older and as Doctor Who has rebounded from the dusty back shelves of dying video stores to the front displays of every shop in town, it isn’t hard to see that these movies, like all the shady little corners of Doctor Who history, deserve a well-earned place in culture.

I already established the importance of Bernard Cribbins and the impact he must have made on the producers and creators of the show who were only children when he ran from the Daleks the first time around. But other little bits and pieces of the two movies have worked their way into current Doctor Who continuity as well. The only Daleks viewers saw on TV were in black and white until 1972. Even after the show switched to color, Daleks were most often portrayed as gun-metal gray and drab.

But in the two Cushing films, the Daleks are bright and fun. We see Daleks in technicolor red, blue, gold, and black. Eventually we’d see bright, multi-colored Daleks on the TV show, but not until after the series revival in 2005. I fully believe this was the influence of the two Amicus films on that generation of fans who grew up with them. The BBC TV series was never so bold and never had the budget to paint that far outside the lines. Those posters and coloring books and little toys from the movie that featured cheerfully colored Daleks made an indelible impression, and eventually found a way into the series proper.

I would never suggest that you watch the two Amicus films INSTEAD of the original televised stories. Watch those classic serials and enjoy them for what they are, limitations and all. But then, after you’ve familiarized yourself with the canon episodes, you’ll be more able to appreciate the different flavor that these movies offer and the weird things that they do. They’re low-budget exploitation versions of even lower-budgeted TV episodes, aimed squarely at giving the widest audience possible a cheap thrill. But then again, they also aren’t without their charms, and by influencing the people who are in charge of the series today, even in the very smallest of ways, they’ve earned a place on the shelf right alongside the rest of the Doctors.

Or maybe just below.
Posted by Patrick Bromley at 12:00 PM

Email ThisBlogThis!Share to TwitterShare to FacebookShare to Pinterest
Labels: british films, doctor who, dr. who and the daleks, heath holland on, movies based on tv shows, peter cushing, sci fi movies