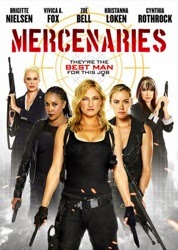 The first of the female Expendables movies is here, and it's better than you'd expect.

Around the time The Expendables 2 was announced and it became apparent this "rounding up action stars of the past and sticking them all in the same movie" was going to become a thing, the internet began dream casting its own Lady Expendables movie. Names like Gina Carano and Katee Sackhoff were thrown around alongside Sigourney Weaver and a few assorted others. Eventually, Hollywood did announce its own female Expendables movie -- one slated to be directed by brilliant action auteur Robert Luketic (of Legally Blonde and Monster-in-Law fame) and which, as currently announced, casts its heroes as assassins posing as "high class call girls." Because no one wants to see an action movie with women unless they're dressing up in little outfits.

Beating Hollywood to the punch is Mercenaries, a female Expendables imitator produced by The Asylum (the studio responsible for direct-to-DVD ripoff junk like Transmorphers and Atlantic Rim). It's got a lot of the cast fans were originally asking for. My Girlfriend Zoë Bell? Yes! Cynthia Rothrock? Of course. Brigitte Nielsen? Right on! Kristanna Loken? Umm...ok. Vivica A. Fox? I...guess? Nicole Bilderback from Can't Hardly Wait! Wait, what? 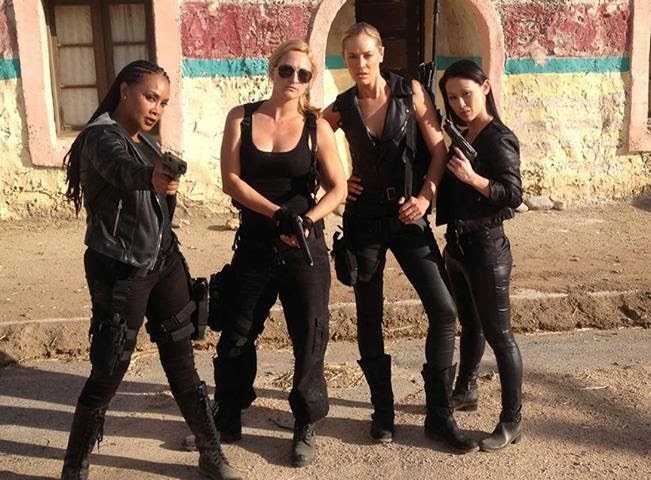 While on a diplomatic mission to some war-torn East European nation, the President's daughter is kidnapped by the terrorist Ulrika (Brigitte Nielsen). Because Ulrika has a mistrust and hatred of men, the CIA (led by Cynthia Rothrock with red streaks in her hair) decides to send in a team of women. And what group of women would be better than prison inmates? They have nothing to lose. They're expendable. Really, this movie should have been called The Expendables. And in The Expendables, aren't those guys actually mercenaries? I don't understand how they got these titles all backwards.

Four women are plucked from prison: former operative-turned-bad Raven (Fox), explosives expert Mei-lin (Bilderback), marksman Kat (Loken) and Clay (MGFZB), the leader. Sent behind enemy lines and cut off from any backup, the four women are forced to rely only on each other...and their guns.

Let's get a couple of things out of the way first. Mercenaries was shot on the super cheap and looks it. The photography is flat and over lit in that made-for-TV way. There is no sense of scope; only a handful of locations are actually used, and you never get the sense that location exists outside of what can be seen in the camera's range. The use of extras is very limited. Many CGI explosions are utilized, as is some CGI bloodspray. Major (expensive) things happen off screen. Director Christopher Douglas-Olen Ray, the man responsible for Mega Shark vs. Crocosaurus and Asteroid vs. Earth (as well as the son of legendary shlock director Fred Olen Ray, who has directed over 100 films under both his own name and various pseudonyms), is not the best action director. He tends to overuse slow motion and speed ramping and he cuts away from the few cool stunts he actually gets. 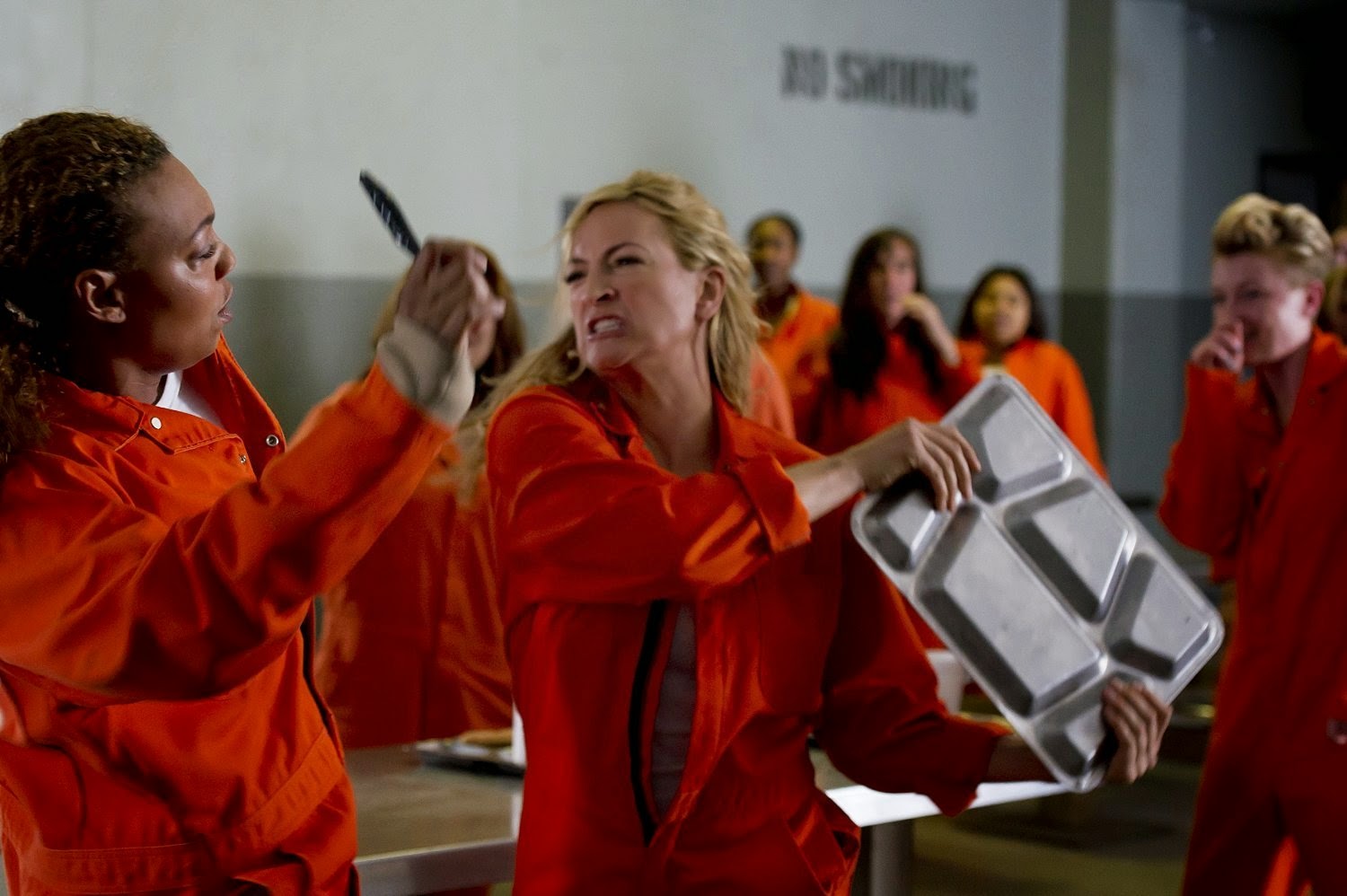 So the movie is cheap and not particularly well made. Why does it still kind of work? Keep in mind that by "kind of work," I mean by the relatively low standards by which we must judge an Expendables rip-off produced by The Asylum. But, yes, by those standards, Mercenaries kind of works.

For starters, everyone (almost everyone) plays it pretty straight. There is no campiness to the approach. Yes, the movie is a throwback and yes it's a knockoff and yes it's aware of what movie it is, but there's none of the winking or ironic air quotes that characterize many of movies produced by The Asylum. It's an earnest attempt at doing the same kind of movie as The Expendables -- a two-fisted shoot-'em-up with a sense of humor about itself -- and comes by its fun '80s energy without having to make a bunch of clumsy references to past movies. For all its technical shortcomings, it finds ways to succeed where even the Expendables movies can sometimes fall short.

Take Brigitte Nielsen's villain, for example. Between the fact that she hasn't been acted on film much in the last two decades and her years spent as a "personality" on VH1 reality shows, there was every indication that Nielsen would go way over the top and camp it up -- to call attention to the fact that "wacky Brigitte Nielsen is playing a bad guy in a low-budget action movie!!" But she doesn't. She just plays the part, and she even manages to give the character some shading that wasn't necessarily on the page. She's clearly enjoying digging into the role but never makes it more about herself than the character she's playing. 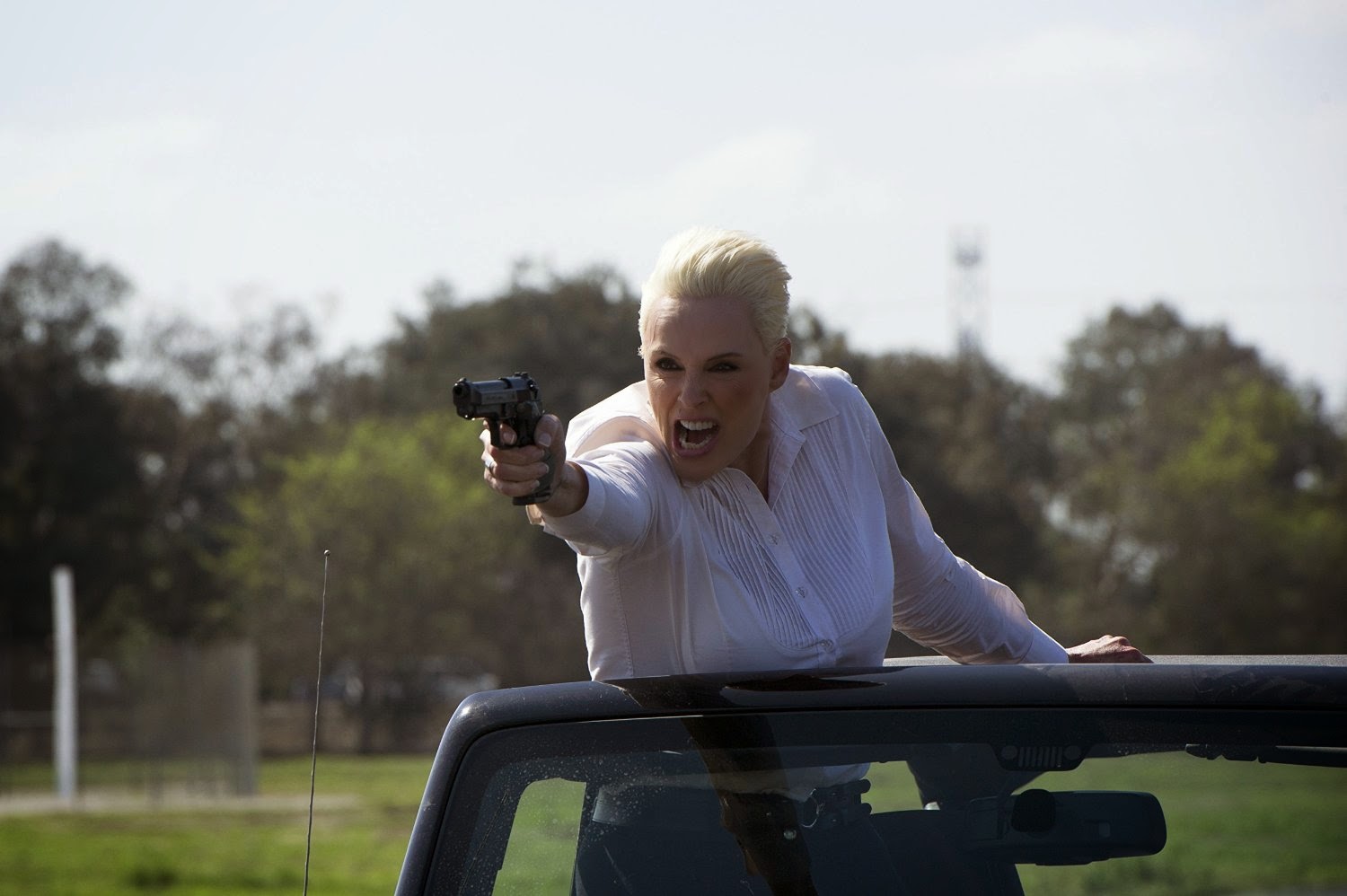 Then there's My Girlfriend Zoë Bell, who doesn't get to create a fun, funny character like Mei-lin but who is more than credible as the team leader. Sporting an American accent, MGZB gets a handful of badass fight scenes (my favorite finds her taking down five or six guys at once in the middle of the street) and infuses Clay with the kind of world-weary sarcasm that would make Bruce Willis or Kurt Russell proud. The way she sighs before facing each new challenge is such a nice character touch, humanizing her while still underscoring her status as a complete badass. She's so tired of having to beat the shit out of people...oh, but she'll do it. Like in Raze from earlier this year, MGZB is better than the movie she's in -- funny, physical, gorgeous and radiating charisma. She's a real-deal movie star who's just one right project away from superstardom.

Not everyone comes off as well. Kristanna Loken, playing the Lee Christmas of the movie, isn't bad, just under-used -- we never really get a sense of who she is or what she can do. Vivica A. Fox, on the other hand, seems overly concerned we might not know she's tough and pitches her performance to such an exaggerated level of attitude and swagger that she overshoots creating a character and lands on cartoon. Yes, the movie is broad, but it's not this broad. And as happy as I am to see Cynthia Rothrock in another action movie -- proof that the people involved understood the appeal of their film -- she's mostly called upon to deliver exposition. But acting was never her strong suit and she hasn't improved any in the years since her direct-to-cable heyday. To make matters worse, she only gets to fight for about 15 seconds. 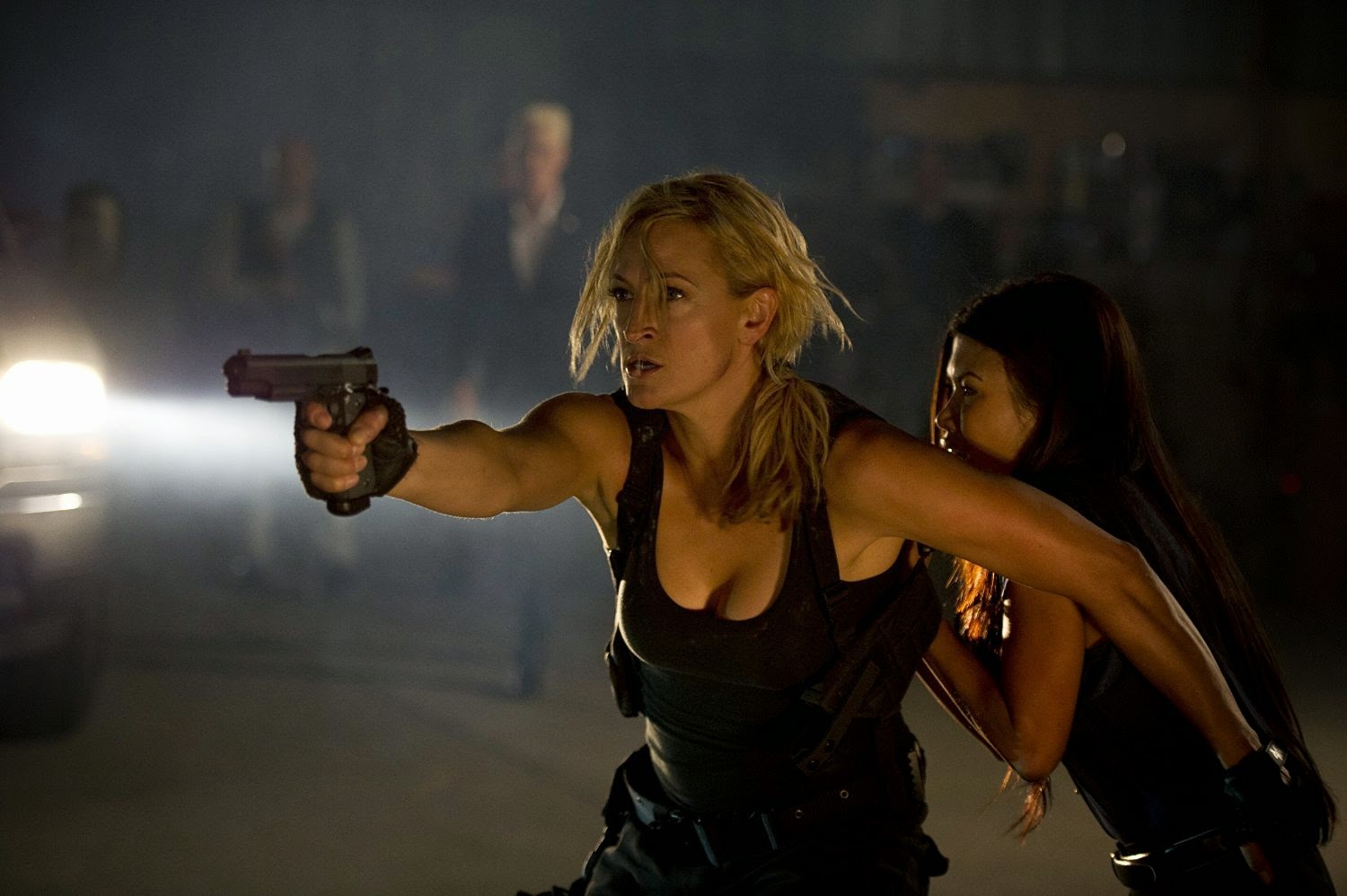 But Mercenaries understands its own appeal and does its damndest to deliver on the things for which we watch a movie like this. It offers a simple plot, clearly defined characters, lots of action and tough-gal dialogue. It knows that we want to see MGZB beat ass and allows her a number of opportunities to beat said ass. Except for a shot of Kristanna Loken in her bra, one pseudo-lesbian seduction scene (that's more about power than it is about sex) and a truly groan-worth line to the effect of going "PMS from hell," there's hardly anything in the movie that calls attention to its almost entirely female cast. It presents the characters as badass action heroes first and women second. In that way, it's actually kind of progressive. Who would have expected that from The Asylum?

Maybe it's all about expectations. I went into The Expendables 3 wanting to have a good time and got something disappointing. I went into Mercenaries expecting to be disappointed and wound up having a pretty good time. I'm guessing My Girlfriend Zoë Bell had a lot to do with that.