The summer movie season is winding down. Time to stay inside and watch these on Netflix. 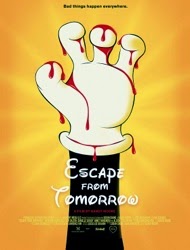 Adam Riske: Escape From Tomorrow (2013, dir. Randy Moore) I'm the only person I know who likes this movie, but at the very least I think it is interesting enough to check out as a curiosity. When Escape From Tomorrow was released many people focused on the gimmick of filming with hidden cameras inside Disney World or called the movie some sort of takedown of Disney World itself. I don't agree with the latter statement. I think Escape From Tomorrow uses an Eraserhead approach to tell an uplifting story about how you have a responsibility to yourself not only to imagine your ideal life but to seek it out. If you don't, you're going to have to pay for the shitty consequences. It's like an inverse of It's a Wonderful Life. 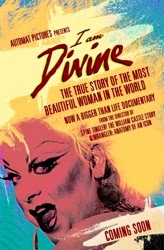 Adam Thas: I Am Divine (2013, dir. Jeffrey Schwarz) Up until a few years ago, I really didn’t know who Divine was. Now let’s be clear -- I’d seen Divine on screen, but besides that didn’t know much about who the person was. The movie itself can be a bit too in love with Divine at times, but when it’s not, it tells the story of a unique individual who has a very special place in Hollywood history. It’s interesting to see the development of John Waters and how he and Divine impacted one another’s careers, carving out a niche audience throughout the country. Not only did I find the movie and Divine interesting, it’s made me want to go and seek out more of John Waters and Divine’s films. 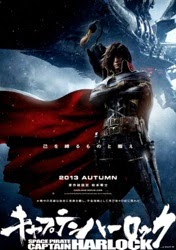 Heath Holland: Space Pirate Captain Harlock (2013, dir. Shinji Aramaki) This one's for all the anime and video game fans. Captain Harlock is a pulp character from Japanese manga that goes back to the '70s and has since been featured in quite a few anime adaptations. You don't need to have any previous knowledge of what has come before because this is a new take on the character and his universe. Harlock is the mysterious captain of the spaceship Arcadia, a near-mythical vessel crewed by mercenaries and refugees who each have their own motivations. The plot is better experienced first-hand, but I will offer that the story is built around existing genre cliches with welcome twists and additions that make it original and surprisingly layered. Also, whereas Harlock has always been traditionally animated, this time we're treated to beautiful CGI animation; we've come a long way since Final Fantasy: The Spirits Within, even if this story does remind me a Final Fantasy video game (which I consider a compliment). Kudos to Netflix for carrying this film because most theaters in the US never got it and it's only currently available to import on DVD and Blu-ray. 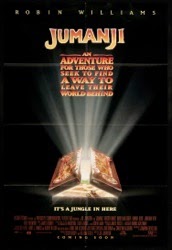 JB: Jumanji (1995, dir. Joe Johnston) I had forgotten about how much I like this film, and then the sad news of Robin Williams' passing earlier this week got me to thinking about his films. I have heard that some people think the early CGI stuff in the film dates it a bit, but I have always thought for the time (Good God -- this film turns 20 next year) I find the effects ground-breaking and convincing. There is also a spectacular flood sequence featuring practical effects too. Besides Williams' performance, which is very good, I have always been impressed by how this film, though a children's film, keeps the stakes high. The stuff of this conflict has very real consequences-- a young boy starts to turn into a monkey and begins to cry. I'm also impressed by, like the best of Walt Disney, how scary some of it is. Disney and the makers of Jumanji knew that for the happy ending to have resonance, the bad stuff could not be a joke. Jumanji also features a young Kirsten Dunst, Bonnie Hunt, and Jonathan Hyde, hilarious as the big-game hunter Van Pelt. I love the ending too, which is unexpectedly sweet, just like, according to all I have been reading this week, Robin Williams. 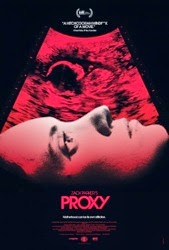 Proxy (2014, dir. Zack Parker) Like JB, I was going to recommend a Robin Williams movie this week. But then I realized that everyone is mourning Robin Williams in different ways; some people immediately want to revisit Dead Poets Society while others turn to Mrs. Doubtfire (and, to be honest, I have no interest in rewatching either one). Suggesting that you watch Robert Altman's notorious adaptation of Popeye this weekend probably won't help with your sense of loss if you're not a fan of the movie (though JB's endorsement of Jumanji has convinced me to watch it again). So instead I'll recommend Proxy, a sort-of horror movie from earlier this year that's brand new to Netflix. The less you know going into the movie the better, since it's a movie that goes in a lot of directions you might not expect. While I'd argue it fails to stick the landing, there's a lot in it that's fascinating and compelling; the direction is tight and controlled even when the movie has a very deliberate pace. Just be warned that there's some stuff in here that's hard to watch -- not gory or anything, just disturbing. If you can make it through the first 10 minutes, you should be ok.
Posted by Patrick Bromley at 12:00 PM