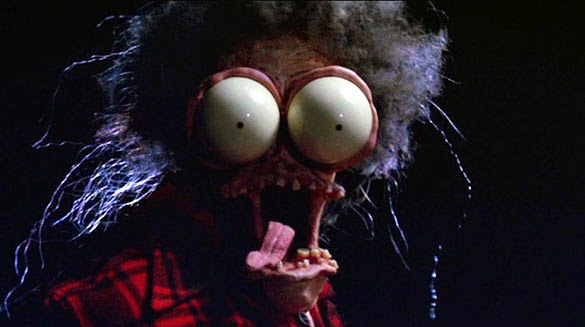 Tomorrow is officially #ScaryMovieMonth. Let's kick things off a bit early, shall we?

Things get trippy fast as Willy Wonka (Gene Wilder, never better) takes his guests on a boat tour down a psychedelic tunnel. In a movie filled with weirdness [and countless examples of child endangerment], this scene takes the Everlasting Gobstopper. Mr. Wonka's dead-eyed, thousand-yard stare, the flashing lights, the imagery of insects, the cacophonous music, the CHICKEN GETTING ITS HEAD CUT OFF ... all served to freak kids out since the movie's original release. "Are the fires of hell a-glowing? Is the grisly reaper mowing?" They don't make 'em like they used to! Many will claim that [SPOILER!] the ultimate reveal of Judge Doom (Christopher Lloyd) as the half-man, half-toon villain -- with his red, bulging eyes, crazy patch of hair and high-pitched voice -- is the scariest moment in this comedy crime film (for kids?). Others will say it's when he gets flattened by a steamroller. For me, nothing is quite as terrifying as when he dips an innocent, whimpering red shoe into a vat of acid. What an asshole! 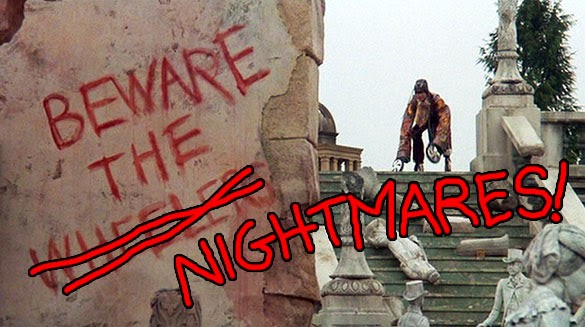 F this whole thing. How is this not a horror film? I was going to feature the original The Wizard of Oz due to its genuinely disturbing flying monkeys (as well as Margaret Hamilton's pitch-perfect portrayal of The Wicked Witch of the West), but then I remembered that Return to Oz showcases electroshock therapy on a child in an insane asylum, Mombi the headless witch (and her collection of disembodied heads) and those creepy Wheelers. So, yeah, nice try 1939! '85's got you beat!

Look, this movie -- much like F This Movie! -- knows what it's doing. And the scene that's always messed with my head is when Bill (Alex Winter) is forced to kiss his disgusting grandmother (also played by Alex Winter) in purgatory. Know this: I will never force my daughter to kiss another relative, on earth OR in hell. Nightmare fuel. 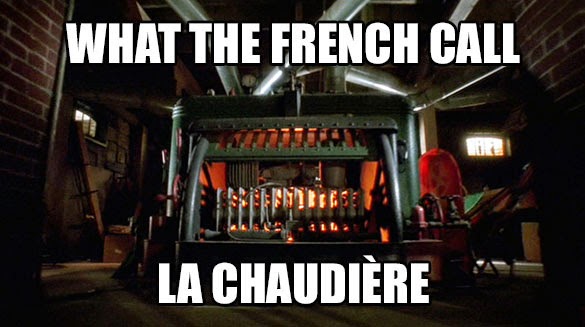 I didn't grow up on the gleaming north shore of Chicago; thus, my parents' modest northwest suburban home wasn't palatial, and it didn't have an cavernous basement with sinister, turn-of-the-century utilities. I was a little bit older when I first saw Home Alone (i.e., I was [slightly?] past crapping my pants at the thought of a home-invading Daniel Stern), but DAT FURNACE. Um, nothankyou dungeon of doom!

You know how you like to think you're the hero-type? Like you'd totally don the enemy's uniform and infiltrate a highly fortified base to rescue a princess? You'd LAUGH in the face of the "force," right? But then -- because you had a bad plan with no exit strategy -- you find yourself stuck in a trash compactor (of all places)? And if that's not enough, something "else" is down there with you? And then you're all, "I'm out!" Laser fights I can handle. Large cephalopods with seven suckered tentacles surrounding a fanged maw containing a sharp serrated probe? NOPE.

Kind of a cheat to include three-movies-in-one, but WHATEVER (my list, my rules) -- this is my most personal entry. Sure, some people LOVE '80s fantasy films (*ahem* PATRICK *ahem*), and the dark, otherworldly realms they occupy. Others, like me, get total FREAKED whenever we stumble upon these dusty remnants whilst surfing the dial at 3 a.m. Like, I'm alone. ALONE-alone. All alone. No one's around, and I'm very much unsettled. Puppets will do that (be they Spitting Image or others). So will anything inaccessibly "British." I'll tell you this much: I'm done with meat loaf. "It's evil!" Just like Skeksis. And Fireys. 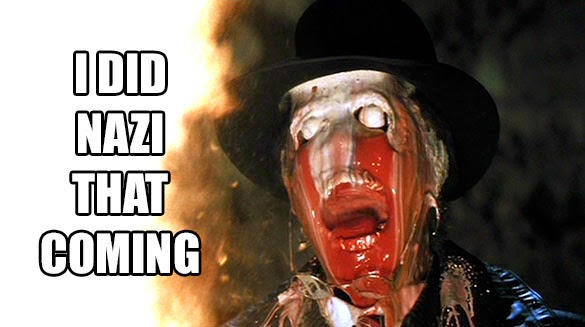 This one's also a little unfair because, while the scene in which evil Nazis' faces melt after looking directly at the Ark Of The Covenant is, indeed, scary, it's also one of the coolest things I've ever seen in a movie. When I first saw this as a wee lad, I felt like I was getting away with something (it's a singular sensation that's hard to describe). Scary, but also insanely badass. 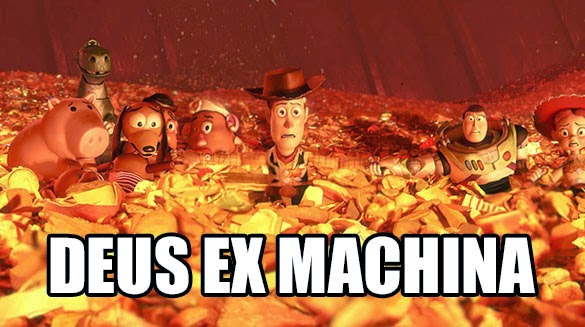 I don't care if it's a retread of the same plot and/or climax contrivance of Toy Story 2 (or a thousand other films, for that matter), the penultimate moment in which all of Andy's toys accept their fate, hold each other's hands and wait peacefully for the sweet release of a fiery death is both incredibly frightening and incredibly sad. If you didn't tear up during this scene, well then ... YOU'RE the monster.

The "donkey scene" stands out in a packed field of early Disney films in which scary shit goes down (e.g., the pink elephants in Dumbo, baby oysters getting eaten by a walrus in Alice in Wonderland, ghosts haunting an enchanted forest in Snow White and the Seven Dwarfs, the stepmother's glowing eyes in Cinderella, etc.). A child literally screams for his mom as he turns into a donkey. WHAT'S THAT ABOUT?! Pleasure Island has a dark secret -- it punishes you for your naughtiness (namely, smoking, drinking and pool). It turns mischievous children into LITERAL donkeys, sent to the salt mine as slave laborers (la-burros?). Pinocchio: providing children with a HORRIFYING moral compass for almost 75 years!

"There was this sound, like a garbage truck dropped off the Empire State Building ..."
Posted by Patrick Bromley at 6:00 AM