Revisiting U2’s 1988 concert documentary film after 26 years serves as a reminder of two things: 1) controversy has always surrounded the group, and 2) most rock and roll documentaries take themselves way too seriously.

If the Irish rock band U2 had quietly inserted a surprise album in the mailbox of half-a-billion people worldwide as recently as ten years ago, they’d have probably been hailed as the most generous and beloved band ever. Yet when they dropped their latest album in the iTunes account of that many Apple users, very few people were amused.

It sometimes seems like the sun has set on what was one of the biggest bands in the world. I consider myself a casual U2 fan and I can’t quote many songs outside their massive catalog of hits, but I still have a fondness for a band that was THE musical giant during my formative years. So, when the internet blew up recently over the Apple debacle, it was that aforementioned fondness that reminded me that I had bought U2: Rattle and Hum on DVD way back in 1999, when those shiny discs were still a novelty and seemed to hold the secrets of the universe. I’ll tell you a secret: they really did, and they still do.

Thinking that I hadn’t watched the film since then and that an opinion of something that hasn’t been revisited in more than four or five years isn’t an opinion worth having at all (because our tastes change over time, see), I took to the internet to see if the world at large thought the years had been kind to the movie. As it turns out, finding an article on the World Wide Web about Rattle and Hum, U2, or even Bono that attempts to retain any modicum of critical objectivity is as fruitless as trying to get a vegan to eat turducken at Christmas. In other words, you’re barking up the wrong tree. What I’m saying is that the internet hates everything. So, ladies, gentlemen, and those in between, here’s an objective look at the 1988 concert and tour documentary, U2: Rattle and Hum. 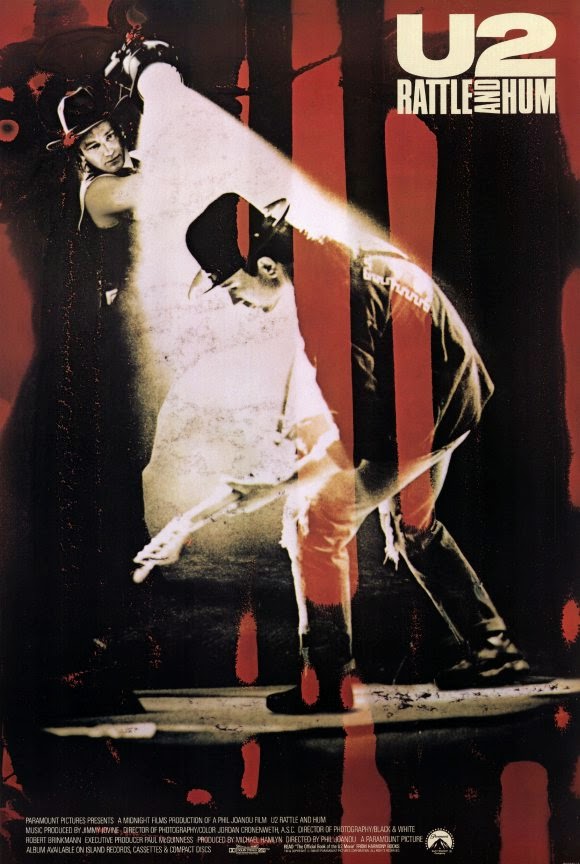 The documentary was directed by Phil Joanou, who had previously filmed the teen movie Three O’Clock High and would go on to direct Sean Penn, Ed Harris, and Gary Oldman in State of Grace, Richard Gere and Kim Bassinger in Final Analysis, and Dwayne Johnson and Xzibit in the 2006 juvenile detention football movie Gridiron Gang. Also, if you watched that cool internet short film that had Thomas Jane reprising his role as The Punisher, that was Joanou, too. Aping the style of nearly every music video on MTV during the ‘80s, the documentary is primarily filmed in grainy black and white, lending an air of grittiness and stark realism. The film was released by Paramount in over 1000 theaters, which was unparalleled at the time.

The initial idea behind Rattle and Hum was to pay tribute to the band’s influences in a documentary film and accompanying soundtrack, though at some point it all went off the rails (the film never tells us it’s about roots or tribute) and comes off as a little self-aggrandizing. Even 1988 audiences had drastically different reactions to the film, and many thought the documentary and its soundtrack were pretentious and snobby. It doesn’t help that the first lines of the movie are Bono saying “this is a song Charles Manson stole from The Beatles; well, we’re stealing it back.” The movie is like a Rorschach test: if you think of Bono as a earnest idealist who believes the things he says, you’re more forgiving than if you think he’s a pompous jackass who believes he can solve the ills of the world.

Since U2 opens the film with a Beatles reference, I’ll make one myself. I tend to think of Rattle and Hum as sort of the opposite of A Hard Day’s Night. Where the Beatles film showcases a bunch of affable and charming dudes with magnetic personalities who were each instantly identifiable and fully formed stars, the U2 film depicts a quartet of shy introverts who seem short on ego and are not at all sure about the whole fame thing. Sure, when they’re on the stage they posture and pose, living up the idea of what a rock star was in the late ‘80s, but off-stage footage depicts a band that is making things up as they go trying desperately to hold on for the ride. Filmed the year after their landmark album The Joshua Tree, the first album to ever sell a million copies in America, the U2 we see in Rattle and Hum is a band that had known moderate success for several years and suddenly found themselves to be the biggest band in the world.

It’s the little moments, not the big arena concert footage that really resonate with me. One of the cooler sequences shows Bono and company working out a cover of “All Along the Watchtower” on the bus before taking stage at a venue. They fiddle with an acoustic guitar only for a few minutes as they attempt to establish a tempo and a good key to play it in; the film quickly cuts to the band performing the song on stage in front of a huge crowd, sounding like they’d rehearsed for hours. Going back to the original goal of the project, Joanou films the musicians following the trail of their own heroes as they make a trek through Memphis, Tennessee, the birthplace of rock and roll. They visit Sun Studios, where Elvis, Johnny Cash, and Jerry Lee Lewis made their first recordings, and U2 records a few of their own songs there while the cameras roll. 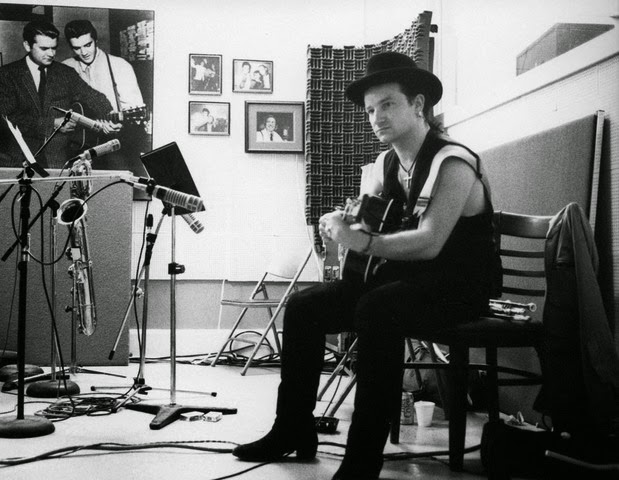 One of the most powerful scenes in the film for me is also one that, to my surprise, seems to be dismissed in other reviews. The band visits Graceland, passing through Elvis’ massive collection of cars, motorcycles, gold records, and accumulated trophies, past the dining room of his house, past the den where he watched TV, then finally out through the other side of the property where Elvis is buried. The drummer for U2, Larry Mullen Jr., tells Joanou in interview footage that Elvis meant a lot more to him than he did to the other guys in the band, and that he didn’t like the fact that Elvis was buried on the grounds, surrounded by all the fun stuff. Mullen is visibly rattled by the experience that he had been enjoying up to that point. What I take from the scene (much like what I took from my own Graceland experience) is that Mullin had realized that it doesn’t matter who you are, how famous you become, or how many accolades or awards you win; we all up end up in the same place in the end. Joanou holds the shot on Mullin’s averted eyes, capturing a moment in the drummer’s life forever on film.

Another of my favorite moments occurs when the band goes to a little church in Harlem and sings a stripped-down version of “I Still Haven’t Found What I’m Looking For” with a gospel choir. It starts with Bono singing only to the accompaniment of Edge’s guitar, but about halfway through the song the choir takes over completely and the song becomes something altogether different. It’s not about U2 or the choir, it’s about what they’re creating together. For a band and a film so often labeled as pretentious, it’s a remarkably humble moment.

It’s not all naval gazing and choruses of Kumbaya. There are large, iconic rock and roll moments as well; 27-year-old Bono, with his impossibly good looks and effortless cool, struts around in front of tens of thousands of people as if he were born on the stage. One shot captures him in profile against the bright lights as steam floats off of his forehead and into the night sky. You don’t see that everyday. The Edge has his own moments to shine, particularly near the opening of the film where he sings a haunting tune in an empty room with only the accompaniment of his guitar. It’s amazing to see what happens as soon as these guys pick up their instruments and walk out on the stage. Never has the term “greater than the sum of their parts” been more appropriate. You don’t get the experience of watching men transform into giants when you listen to an album. This is the domain where film shines. 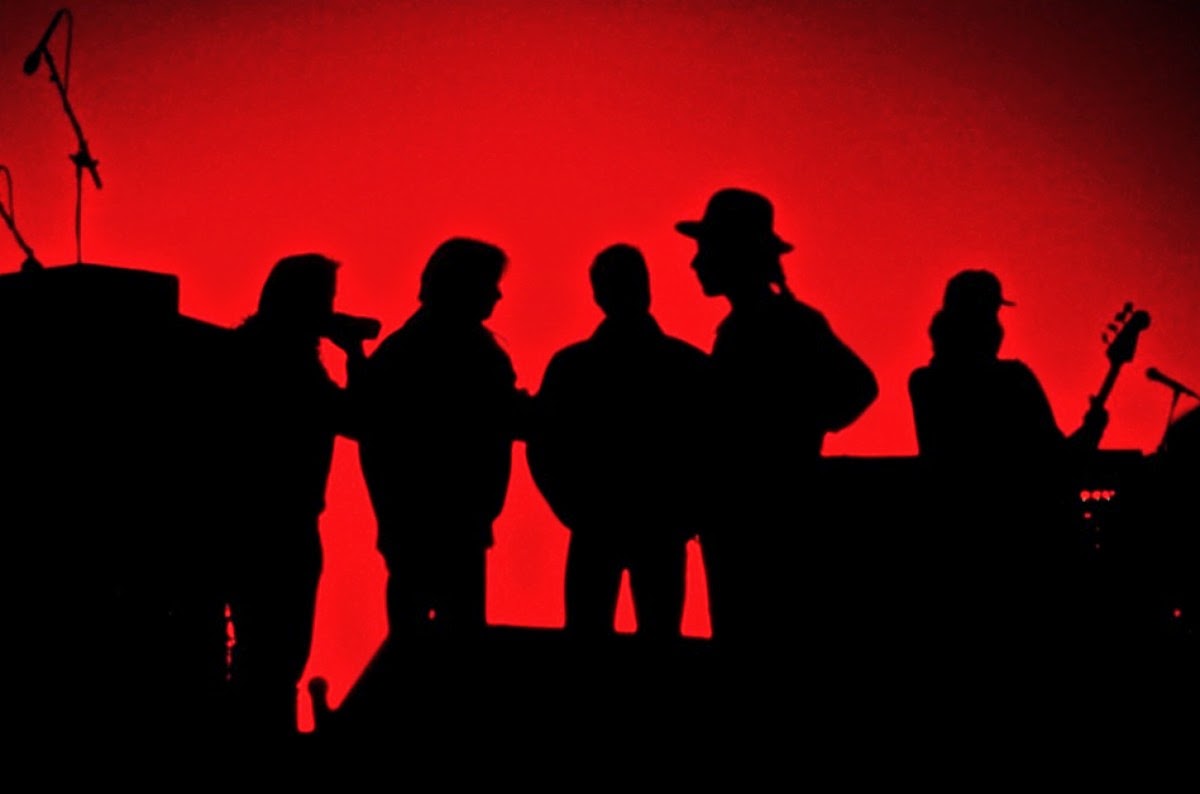 Then there’s the message. Oh, the message. U2 has always been about a lot more than sex, drugs, and rock and roll, I get that. Hey, I even applaud it, even if it’s not really my thing. Yes, there is a fair bit of social commentary toward the end of the film. In one of the concert segments, Bono stops the song “Sunday Bloody Sunday” to give a little speech about how sick he is of Irish ex-patriots who haven’t been back to their home country in 20 or 30 years and talk about the revolution “back home.” Bono then denounces the I.R.A. and says “fuck the revolution!” In another scene, the bass player, Adam Clayton, says that a lot of people say that music and politics shouldn’t mix, but that he disagrees.

So IS the film pretentious? Do Bono and company come across like a bunch of tortured art snobs at the end of the 98 minutes? Yes and no. Joanou admitted to Rolling Stone in 1989 that he was deliberately aiming for a serious tone and that he had footage of more light-hearted moments but chose not to include them in the film in order to attain a more "important" feel. He admits his own film is pretentious and that he regrets decisions he made. It’s hard not to come off as holier-than-thou when you’re always preaching about a cause or a charity, and even the band themselves have occasionally admitted that they’ve put the message before the music more than once over the years. But if you really look at it with open eyes, Rattle and Hum captures an incredibly earnest group of guys who believe completely in the causes they’re championing. Even though Bono was told that he was on the I.R.A.’s list of enemies and was potentially risking his life to speak out against them, he did it anyway in front of not only a sold out arena but in a film that he knew would play all over the world. I’d argue that this isn’t pomposity; this is passion.

I tend to be a little hard on Bono because a little bit goes a long way. When you consort with prophets, priests, and kings, the rest of us are bound to feel like you’ve got a messiah complex. If this film hasn’t altogether changed my mind on the guy, it HAS softened me on him. If you had seen your innocent neighbors and countrymen killed in horrific bombings year after year and found yourself with a microphone in your hand and millions of people eager to hear what you had to say, most of us wouldn’t hesitate. The Bono presented in this film is more than a little naïve, but he was also willing to risk his own safety to bring awareness to his causes. Rattle and Hum reminds me that I could stand to be a little bit more naïve in my own life.

In the end, is Rattle and Hum a great movie? No, definitely not. It’s a serious, message-driven chronicle of a band at a critical point in their lives, right before they’d change into something new and different when the pop culture machine wore them down. It’s also punctuated by some incredible musical performances and a handful of fragile human moments. Far short of perfection, I’d still say that’s not a bad day at the movies.
Posted by Patrick Bromley at 12:00 PM