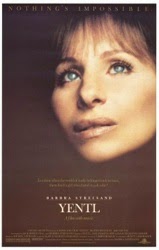 This one’s for you, Gabby Ferro!

I can say with almost absolute certainty that if it were not for Gabby’s recommendation, I would have never watched Yentl. I watch just about everything, but the hook of a 2+ hour Barbra Streisand movie about how much she loves studying the Torah just isn’t a movie I would gravitate towards. If I were a regular moviegoer when Yentl was released (in 1983, when I was one year old), that might be a different story. However, with the movie not being in the public eye anymore, there is little chance I would seek it out 31 years after its original release if not for Gabby.

I’m glad I did. Did I love Yentl? No, but I appreciated it. It’s extremely well-made. According to IMBD, Steven Spielberg called it “the best directorial debut since Citizen Kane.” The acting is top-notch, especially from Streisand, Mandy Patinkin and Amy Irving. The technical credits are exemplary, from the cinematography to the production design to the musical score. It reminded me of classic epics such as Gone with the Wind in sheer filmmaking. The songs were, well...beautifully sung? I didn’t love the songs, but that’s ok. Even more than movies, a person’s taste in music is completely subjective. I’m sure Gabby enjoys it and that makes me enjoy it...almost. 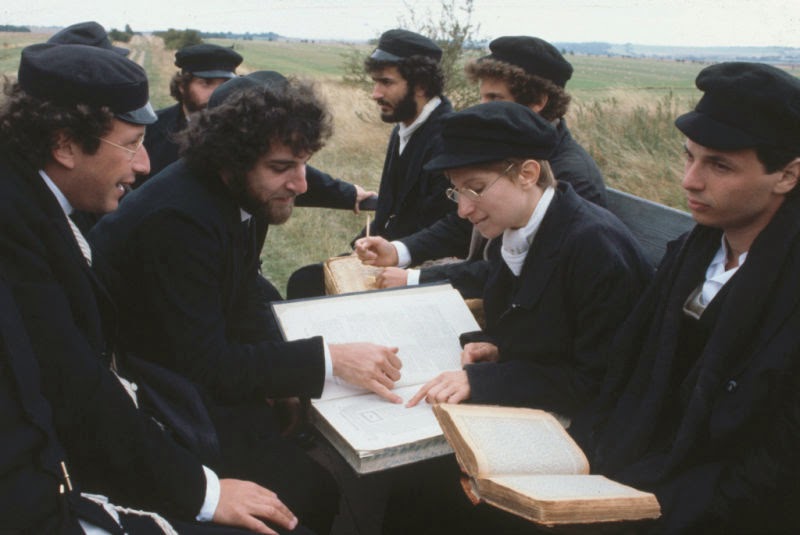 This movie made me feel like a terrible Jew. Here I am, allowed to study the Torah whenever I want to, and that’s the thing I would least want to do maybe ever. I was Bar Mitzvah’d back in 1995 at the age of 12, and since then I got out of organized religion. The fact that Yentl, the character, wants to study the Torah so much that she dresses like a dude (she looks like a Muppet mixed with Bob Balaban) is enigmatic to me, but that’s because I’m an idiot who cares about baseball, girls and Scary Movie Month. If Yentl had these temptations, maybe she wouldn’t go for theology either. My point being, love what you love, so if I approach Yentl’s love of Jewish theology the same way I approach my love of movies it makes total sense. How would I feel if, because of my gender, I was not allowed to watch movies? It would be terrible. Would I cross-dress to get access to movies? Never say never, but never. I would find a new hobby. So Yentl is a braver person than I am.

What struck me especially about Yentl is how much it hews closely to a Disney Princess musical. I don’t mean that as a slight. I enjoy those movies. Yentl is basically a Jewish Mulan with no fighting and more kvetching. I’m curious what strikes Gabby so much about it, and I’ll venture a few guesses: 1) She likes it because she likes it; 2) She’s a fan of Barbra Streisand and 3) The feminist point of view (women can and should do anything men can do – which I support) is empowering and speaks to her in some way. If any or all of these are true, I am happy that those are the reasons Yentl speaks to Gabby. Please leave a comment, Gabby. I’d love to hear why the movie resonates so strongly for you. I think I get it, but I want to make sure I don’t speak for you. 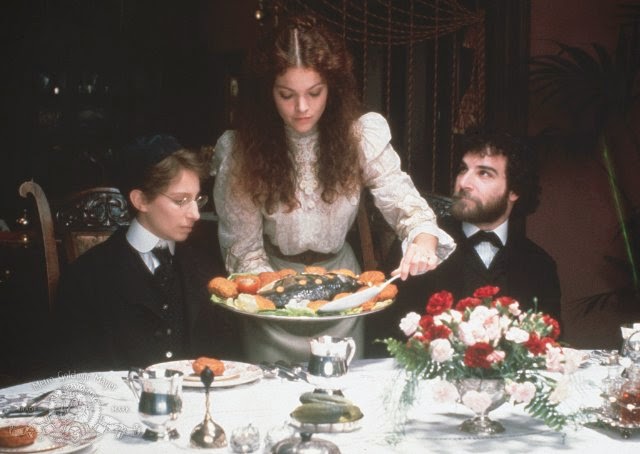 I found the movie much more involving than I expected to. The lion’s share of the credit for that would go to Mandy Patinkin, who plays Avigdor, Yentl’s study partner and closest friend. There’s a scene in this movie that I love where Avigdor explains to Yentl (who Avigdor thinks is another male) that he cannot marry Hadass (Amy Irving’s character) because he is thought by her parents to have bad lineage because his brother committed suicide. So here we have another character denied of what he wants because of something that is out of his control. Just as much as Yentl can’t help being born a woman, Avigdor can’t help the black mark left on his family. The love triangle subplot of the movie is affecting and truly what the movie is about, more so than about Judaism. Yentl tells a human story out of what could be seen as stodgy or imposing subject matter. I love that it’s about a person following her dreams and taking control of her own destiny and pursuit of happiness.

Did I have fun during Yentl? Kinda. It’s entertaining and I couldn’t help but think to myself, when one character asks what Hadass is like when she’s sleeping, that she dreams of Carrie White’s hand popping out of the grave. But that’s just me being an idiot. The ending is also satisfying, as Yentl goes off to pursue her dream Frodo-style and helps her friends Avigdor and Hadass in the process. I feel like this is the type of movie I’m supposed to hate but I don’t at all. You see, I’m going through my own struggle with Yentl, because I have to “cross-dress” to appear to be a guy who didn’t enjoy Yentl when actually that’s not me and I did enjoy Yentl. Boom! This movie’s got layers. After this movie and The Guilt Trip, I guess I’m cool with Barbra Streisand. Never thought I’d say that. 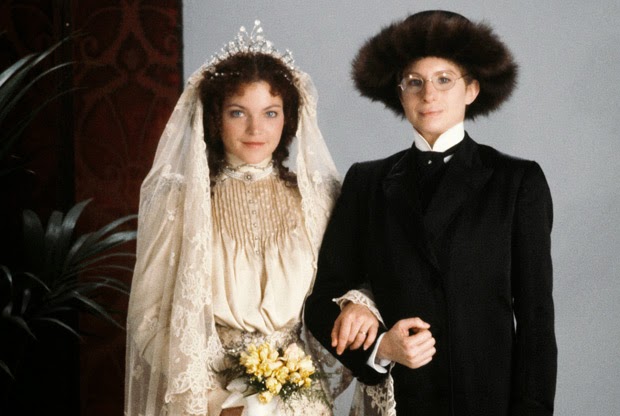 P.S. I didn’t love some of the scenes such as when all the boys go skinny dipping and Yentl freaks the fuck out because she’s got a vajayjay instead of a wiener. That’s some Doubtfire shit. There’s also a scene where Yentl has to deflower Hadass (on their wedding night) but they have a Labyrinth dance-magic-dance slumber party because of lack of the aforementioned schlong. Dicks can be a real problem sometimes.
Posted by Patrick Bromley at 12:00 PM