When next we recommend, it will be #ScaryMovieMonth. 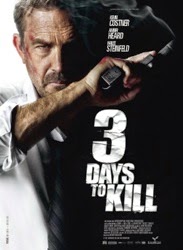 Adam Riske: 3 Days to Kill (2014, dir. McG) Admittedly, I have a weakness for Kevin Costner movies, but this one is something else. It's goofy and fun in a way that someone can only witness, not describe. Even Amber Heard is kind of good in this movie (she's terrible, but it's so over-the-top I have to think she knows what she's doing). I had low expectations going into this movie (considering it's directed by McG) but came out pleasantly surprised. Give it a look. I'm curious what you all would think. A true guilty pleasure. 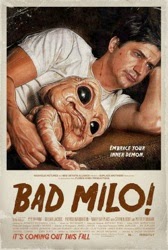 Adam Thas: Bad Milo! (2013, dir Jacob Vaughan) Imagine if you take something unfunny like the Bridesmaids “shitting” scene, but after the girls got sick, their feces ran around killing people. Okay, I may be the only person on this site who enjoyed this movie, but I also enjoy guys getting kicked in the nuts…and Ken Marino. The plot is about a guy who finds out he has an angry monster living up his ass. Most would just stop there, thinking that is funny enough to watch or stupid enough to pass on. However, I thought the movie walked the line between horror and comedy really well, a lot having to do with Ken Marino. The movie is filled with some off-the-wall characters that are almost too ridiculous to be believed, but through it manages to say something about relationships. Sandwiched between the craziness is actually some interesting commentary on the way different people cope with disease. At the very least, the movie is incredibly short (1:25), so if you hate it, at least you didn’t spend a lot of time with it. 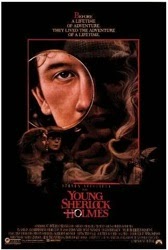 Erich: Young Sherlock Holmes (1985, dir. Barry Levinson) I don't normally recommend movies that aren't fresh in my mind, but this one is for me as much as for you (I really need to see it again). I went an entire childhood without seeing this gem from '85, finally catching up with it on DVD a few years back. Made at a time before Sherlock Holmes adaptations roamed the TV plains in large herds, this kids' adventure movie has several things going for it. Young Sherlock Holmes was directed by Barry Levinson, written by Chris Columbus, and features early CG special effects courtesy of a pre-Pixar John Lasseter. It also has the distinction of being one of the first batch of films to get a PG-13 rating. Like all good '80s kids movies, Young Sherlock Holmes isn't worried about feel-good lessons and shielding children from danger. It's full of youth in peril, pitting boarding school versions of Holmes and Watson against a human sacrifice cult -- not unlike a certain Indiana Jones movie that earned a PG-13 for similar themes, and was made by many of the same people a year before Holmes was released. I haven't seen either in years, but Young Sherlock Holmes might be the better of the two movies. Give it a try and let me know what you think. 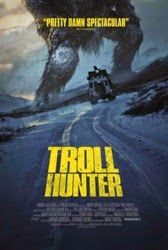 Heath Holland: Troll Hunter (2010, dir. Andre Ovredal) Since it's not quite Scary Movie Month yet, how about a movie that's not quite full-blown horror? Troll Hunter is a found footage movie from Norway about three student filmmakers investigating a man who claims to be a troll hunter. Utilizing a host of clever camera techniques and wisely never giving the audience a long, clear view of the trolls themselves, the whole thing works so much better than it has any right to; meanwhile, the mix of unknown actors and beloved Norwegian comedians ensure that Troll Hunter is just serious enough to bring you to the edge of your seat, but fun enough to bring you back again and again. This has become an annual favorite of mine. 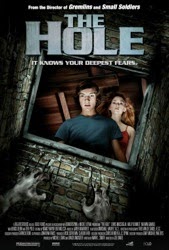 Patrick: The Hole (2009, dir. Joe Dante) Get ready for #ScaryMovieMonth by dipping your scare toe in the scare pond that is my beloved Joe Dante's family-friendly horror movie that does it's best to recall the Amblin movies of the mid-'80s. Two brothers and their single mom (of course) move into a new house and find a hole in their cellar. Inside the hole is...well, you'll see. This is a tricky one to recommend, because it's a movie I often like in theory more than in practice; if you are a fan of Joe Dante and can understand what he was going for, you can be more forgiving of the shortcomings...of which there are several. Shot in 3-D before 3-D really became a thing, the movie faced budgetary obstacles and languished unreleased for years in America (despite getting a good release in Europe) before getting dumped to VOD. I was lucky enough to see one of its few theatrical screenings in Chicago and was happy that a lot of it played; there's some good atmosphere and a few sequences that are effective. I like that Dante is using genre to explore how scary the world can be for kids (because the movie is about child abuse). It's the kind of movie where you can complain about its faults or you can be thankful we got another Joe Dante movie, even one that's compromised.
Posted by Patrick Bromley at 12:00 PM